Second training update 10 days away from the big show on Maui….wondering if enough is enough? 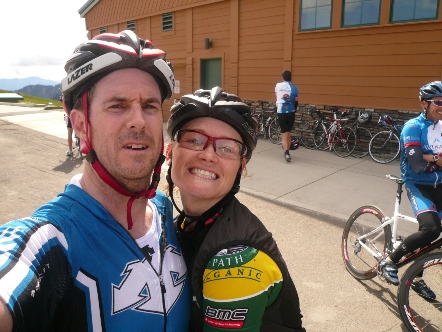 This week was a whole helping of record shattering on both ends of the spectrum. I am quite happy to take the good with the bad because the good is where it matters and the bad will be explained away by me…(ha… read my last post on rationalization of bad training pre race!).

My plan for the three weeks to Maui taper includes a lot of repetition of the same workouts. The framework for all three weeks is identical. Essentially, I am building volume on the bike to get my strength back from altitude, building speed on the run to reinforce good legspeed and working on bursts of speed in the pool to get good turnover in the water. Week by week I can see if I am improving or not using established times and historical power readings to compare Melanie now to Melanie then. The one thing that still amazes me is "Melanie being a triathlete" is better on the bike than "Melanie being a mountain biker". The variety of training really works well for me and if I ever become a cycling coach I am going to advocate consistent cross training. It works!

Anyways, part of my evaluation of how the training is going is having a fun time comparing to my notes from previous years. When I am building to a taper essentially there are key workouts in amongst a lot of fluff workouts. Garbage, if you will. There are different approaches to training for everyone. For me, more is part of the plan. I am a super high volume trainer so if I stop the volume.. BOOM… peaking time. So, for now I am just padding some race pace type workouts with marshmallow fluff to keep a lid on the peak. I try to make the most of the fluff by doing easy cadence stuff, riding my mountain bike to get skills, whatever but in the overall scheme of things essentially I am riding to make myself a little bit tired at the end of the day.

No matter what, volume is volume. Especially when you have now reached the third week of moderately high volume load. So this week had some highlights and some lowlights. Highlight number one: another 15 seconds off the record on Goldstream Heights. I also was chased during that effort by a dog which I promptly dropped.. sucka! Nice surprise given my only instruction for the climb was to go until I feel I am breathing a bit harder. In order to not go too hard I would not let myself look at the time until the top so I would not race it. Sweet. I want to go and rip that climb and see how fast I can really go… I always do it in the last 90 minutes of a four and a half hour ride so a fresh version would be fun to see. But for now, going into Maui 2007, my time up GH is down 1 minute and 30 seconds off my time from 2006.. done and done.

The lowlight of the week had to be today’s swim. I was crossing the 20km swim mileage threshold this week when I dove in the pool . When that is combined with a lotta fluff cycling and some runs and lot of core …. lets just say I wasn’t that into swimming today. I am at the point of wondering … do I need to do this? So I got in and we unfortunately had a 200m time trial today which was SO NOT record breaking for me. It was not completely and totally embarassing because a lot of us in the group were not super fast today, mostly because they are not working on speed, but still given this past week’s effort, I knew what to expect. My legs are dragging a bit from all of the riding. I tried to do some fins but since I injured my foot in August I can’t really swim with fins for very long without pain. Today I did 400m with fins and felt pain in my foot so I cut that out instantly and pulled instead.

The motivating moment was yesterday. I was running one minute repeats on my treadmill at 18 km/h at 2% grade to build legspeed. That workout is money for me and I only just discovered it before Tahoe. I had a nice chat with Simon about peaking for big races and he advocated this workout as well so if one of the fastest runners in the ITU says do it… done. Essentially it is like doing cadence drills on the bike. You can’t really do it that often because it is hard on your legs but you don’t really have to. I have found that the workout sticks immediately. So the motivating moment this week is I had heated up my training room to do my run cadence workout and at about 8 reps I was feeling a bit flogged. All sorts of stuff was going through my head, like oh man I have overdone it, what the…. but then I had a moment of clarity. I opened the door to the training room and let a bit of fresh air in to finish the last two reps and HURRAH! Obviously it was just too hot and stuffy… my legs bounced back immediately with the burst of freshness and I pushed through with the greatest of ease. Nice! 10 reps of that workout used to be a stretch but not anymore! My running is feeling great… I had the pleasure of running with Lauren last weekend and her fast feet helped me drop another 30 seconds off my 5km tempo times. Thanks chicka!

So despite the fact my swim feels horrible the rest of everything is awesome. I can honestly say I am done with the weather here though. Every year I head into the last prep for Maui in atrocious conditions. That said, all three of my long rides have occurred on sunny days so I guess I can’t really complain. Only today I am complaining because I had three hours planned and it is pouring rain. Maybe I should experiment with a 10 day taper rather than 8.. haha!

One more 1/2 hour of power tomorrow with the boys. Kelly Guest, Mike Palmer and I are going to go lay down the 2007 standard to adhere to for 2008. After that last effort, all three of us are done and ready to rock it in Hawaii. In 2007 I have watched Kirsten win a World Cup, Simon win a World Cup or two and post his best Worlds finish and last weekend I watched Sam blow up the Ironman. If that isn’t an indication that it is now my turn to represent, I don’t know what is. It’s not being Canadian, it’s all about putting the work in. When that is done, look out!

So here we are in the last countdown. I am ready…. are you???