The similarities between Maui and the new Las Vegas XTERRA are many.  Loose, rocky terrain, many short steep climbs, hot temperatures, some wind and a kickass resort to name a few.  However, Las Vegas took it to another level.  Sparse is not the word for the lack of vegetation on the bike and run courses as it looked as if we had landed on another planet where organic material had not yet evolved.  The laundry list of XTERRA-worthy participants landed on this planet to do battle for the Cup which made for exciting and close races in both the men’s and the women’s events.  I managed to hold my lead to win the kickoff event of the season holding off Shonny Vanlandingham in my case while Conrad Stoltz was able to take his back to win the men’s event from Josiah Middaugh.

Of special note was the opportunity to meet many of my new Mel’s Rad Racing teammates.  What a wonderful group of people!  Although getting the team going has not been without its challenges they have been nothing but positive and motivating influences for me.  Many of them earned their Maui spots already including team captain and my right hand woman Alexia Droz.  A particularly notable result include Keri Grosse and  Kat Pollard’s wins – with Kat a FULL HOUR faster than the fastest boy in the 15-19 age category.  Girl power!  Another heartbreaker was Fred Smith’s sixth in his age group which as a VERY impressive ninth OVERALL!  It was a very tough field but he was very fast and will earn a Maui spot for sure.  The success of the MelRad team was great and at posting time we still don’t have our full results but congrats to everyone!

Okay, on to the Mel version of events….

I was definitely unsure of my form coming into our first event of the season.  It is no secret that it usually takes me a few races to get my off the bike run form going.  I have had good success in the West races often because my mountain biking saves my run and this year was no exception.  Only in this case, I was battling the same athlete that challenges me for the best bike splits of the race, Shonny V.  The challenge was this:  I was going out first and would be the rabbit.  Shonny would be able to see me the entire time.  Who was going to win – the front runner or the chaser?  Usually I relish the front runner position.  Give me a lead and I will fight to the death to keep it.  This time I was just a little ragged.  It was windy but still hot, the course had no room for recovery and I was a little concerned about the LENGTH of the race.  Usually we start with shorter races between 2:20 and 2:30 but this one was sure to be all of 2:40 if not longer and I could clearly remember my heat meltdown in Sea Otter.  I was focused on pacing myself to avoid nuclear meltdown.  The problem with pacing is it opens the door for the athletes behind you that can see you to make time.  This was a strategic cat and mouse game for me.

The swim was surprisingly enjoyable.  I LOVE point to point swims!  It is like a cool adventure getting from start to finish so after a warm-up I was truly looking forward to the swim start.  It also was somewhat civilized as we actually got a pro wave which meant far less battering from the strong age group men for Mel.  I ended up leading a group out of the water because I missed the front group but felt very comfortable and it cost me very little energy to swim that.  Bad news in that I lost 2:30 to Christine Jeffrey but good news in that I was raring to get going on the bike.

Out onto the bike course I started pacing immediately.  I did not stand and accelerate over the climbs the way I would if I was trying to make ground.  I was smooth, steady and accurate.  I rode a lot of sections other people were walking and was very comfortable the whole ride, which wasn’t good.  Too comfortable!  I just felt like I couldn’t get that next gear which is probably just a lack of race specific fitness, or under-confidence in my own fitness.  Either way, I was being pretty careful with the pace on the bike.

Coming off the bike I knew I had a minute thirty lead on second.  Stupidly, I ended up running straight up and exactly on the course rather than cutting the steep bits off which I am sure cost me energy on the first lap.  It was an out and back course so I could see exactly where I was in relation to the chasers.  I totally missed Lesley Paterson charging up behind me.  She laughed after the race when she said “I thought it was one lap!” which maybe explains her charge from behind.  She held on for third despite the lack of pacing on her first lap. 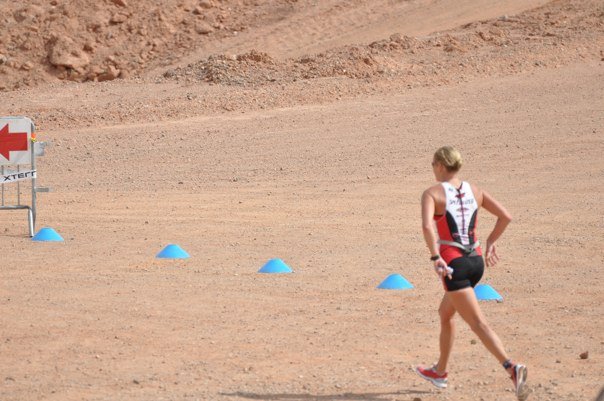 Heading out for the run

So back to the Shonny and Mel battle: As I said, this was a full on pacing effort from me so when Ross told me she was gaining time I was carefully calculating how much time I would need and how much energy to save for a sprint finish.  Luckily, it didn’t come to that but Shonny certainly out ran me in the hills yesterday.  Not that big of a shock since it is pretty much cycling muscles that power you uphill but impressive nevertheless.

Rounding out the top five were Renata Bucher in fourth who said she struggled a little with the run course (likely due to two very long hard races in Saipan the last two weeks) and in fifth was Christine Jeffrey.  A very solid top five podium to say the least and I am very pleased to have held on in the face of this group of challengers.

First I would like to thank my team mates for making this weekend so amazing!  We had team athletes Frank, Heather, Greg, Kat, Alexia, Keri, Kristoffer, Shawn, Don, Fred, Tom, Derek, Bruce, and Becky make the trip to race and then cheer for our team mates on the podium and enjoy some bevies by the pool post race.  It was awesome to meet all of you guys!

Second I would really like to thank my sponsors and supporters for putting me and my team on the road this year.  Thank you to Sunset Racing and the Loews Resort for wonderful help and hospitality this weekend at Lake Las Vegas.  I had such a great stay and look forward to my training block here in Las Vegas.  Thank you to Las Vegas Cyclery for all your help in making things run smoothly with my new bike and for loaning Ross the sweet S-Works Stumpjumper FSR!

Thank you to AVIA – I love my shoes!!  Thank you to Specialized, Shimano, Maxxis, and Titec – my bike ran like a dream!  Thank you to Sundog Eyewear for the beautiful custom red Triathlon Interchange glasses.  Thanks to Profile Design for my speedy Goldcell wetsuit, to GU Sports and Pro Bar for keeping the motor running, to Pactimo for keeping me looking good.  CycleOps provides me with load generating Powerbeam trainers and Powertaps to keep the hurt at maximum and the Suunto folks help me measure that hurt.  Thank you to Nathan for the fast laces, race belts and bags, TYR for all my swimming needs, to Genuine Innovations for gassy things in case of disaster, Sci Con bags for helping me arrive with an unbroken bike and Usana for keeping me free of Swine Flu with Mega Antioxidants.  Each and every one of you is the absolute best at what you do and I appreciate it so, so much.

Next up – Midwest Cup in Fort Custer, Michigan.  BRING IT ON!!!