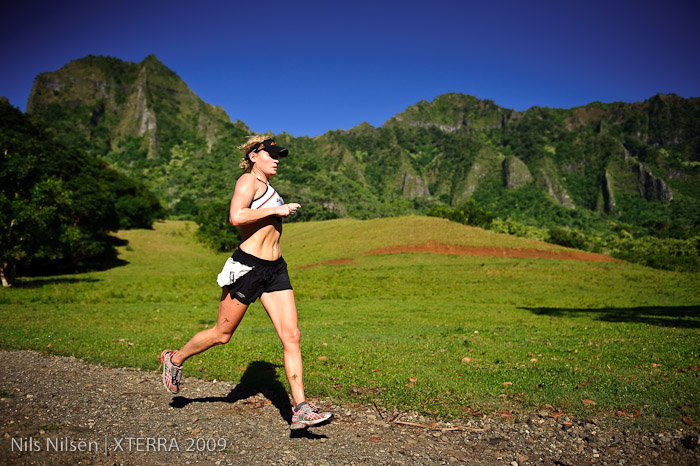 This past weekend I flew to Oahu to take part in XTERRA’s Trail Run World Championships at Kualoa Ranch.  This is where they filmed the movie Jurassic Park and also a venue I visited for the Hawaiian Mountain Tour Stage Race when I was mountain biking and one year, the World Cup finals.  This time I went for a 21km offroad running race that attracted a mix of recreational, elite and triathlete runners from around the world (mostly the US) to compete for some cash and prizes.  I got shellacked.  Seriously!!  Despite three weeks of pretty focused running mileage I was just not fast enough to run with the girls at the front because they were all really, really incredible runners.  In fact, I think had I not done that training I would have had difficulty RUNNING the whole thing without walking.  Wow.  Having that experience was super cool and certainly motivating.  I ended up rounding out the top ten which was fine but I feel I have some unfinished business with that race.  The hills destroyed me and I ended up doing long run pace before five kilometers which was disappointing.  I was dead in the first three kilometers and never came back.  If I would like to do better I have work to do.  However, it was SO fun and incredibly beautiful and so, so worth it.  One word:  HILLS.

When you decide to challenge yourself with the hardest half marathon ever, I will give you an idea of what to expect:

5.       Seriously incredible ocean views from the top of said climbs.

8.       The most heat and humidity you will ever experience in December (unless you are from Hawaii).

9.       The coolest venue:  set for movies like Jurassic Park and the tv show Lost.

10.     Some really fast people and some super chillaxed people but overall a super fun, relaxed vibe that XTERRA is known for.

The race was won by Fiona Docherty in 1:30.  She is a former duathlon world champion now focused on the marathon.  She was followed by Cindy Anderson two minutes later, the defending XTERRA Trail Running World Champion.  I would like to point out the top two were in a class of their own and also were the only two sporting running bum shorts which identifies an “elite” runner from just strong runners, triathletes or recreational runners.  Bum shorts say “my bum is all you are going to see today” and the race illustrated that perfectly.  Cindy is an absolute doll and is a super duper talent and I would say that although Fiona snatched the title with her years of experience, Cindy has incredible potential and is going to be back with a vengeance given she took a whopping six minutes off her winning time from last year.  That also kind of indicates the level of the athletes that arrived this year.. ten minutes faster winning time.  Wow.  Heather Fuhr was top former Ironman triathlete in third at 1:38 with Jenny Tobin taking fifth spot in 1:40.  I was tenth at 1:46 wearing baggy shorts which said “please lower your expectations of me at this event”.

I thought the most inspiring performance I saw was of Fouad Fattoumy, the winner of the Challenged Athletes Division in 1h45.  Yep, Fouad beat me.  He would have beaten me by a much larger chunk of time if not for the fact we were leapfrogging each other each time he would stop when his leg would go numb and he would wait to be able to run again.  He was hit by a car on his bike and since then experiences spinal stenosis.  Him overcoming these difficulties is incredible.  When he was running he was running SO fast!  I was so inspired.  Although my “race” was over early (I was blowing to the moon in the heat and just didn’t bring it on race day) I was trying to run strong and steady and was just so impressed with the heart and passion that he had in his race.  I was content to just cruise it in, see the course, and wait for a better day in the future.  He was throwing it all down that day.  Awesome.  So, so inspiring and made me feel so guilty in succumbing to a bad day.  I had more in the tank and will use the lesson from him in my coming season.  Do EVERYTHING you can with what you have, even if it isn’t the best you have.  READ MORE….

I am very pleased that I have spent this time working on my running and although it didn’t really show on race day I think the money is going in the bank.  I had a fabulous time with my friend Day cruising Waikiki being a tacky tourist and I totally recommend a quick winter break to Hawaii with your best friend to do this race.  It is possible the four hours of beach time and four hours of shopping time per day we logged in the days before the race may not have helped me run fast on Saturday but I wouldn’t trade them for anything.  You only have so many matches to burn per year and this year all of my were burnt by July!  I was there to have fun.  Flights and hotel are inexpensive, the shops have a million deals to be had, it is sunny and warm every day, there is insane surf on the North Shore (the Eddie surf competition was on while we were there – 40 foot waves!) and not too crazy crowds.  Early December is a good time on Oahu.  This year 1200 people agreed with me and totally enjoyed their day at Kualoa Ranch.

Thanks to Team Unlimited for spreading the XTERRA love around to the run crowd.  It was weird starting an XTERRA with my Avi-Stoltz rather than my Profile wetsuit on but other than that, the races are just as cool as the triathlons.  I will go back next year for sure.

So, thanks to my friend Day for the fun trip to Hawaii.  Thanks to Team Unlimited and good old Dave Nicholas for the hospitality when I got there.  Thanks to Air Canada for upgrading my low fare flight.  Thanks to the girls on the start line for showing me how to run fast.  And thanks to all of you for reading.  One more race this year:  the Stewart Mountain 10 miler on Saturday.  Is it going to be in the snow?  We’ll see.  All I know is the searing pain in my quads from running downhill last weekend has almost subsided so I can actually think about running again maybe by then.

Time will tell if a run focus is a good plan in the winter.  Wait until my 2010 race report from the XTERRA Run Worlds.  Will I be a triathlon World Champion when I toe the line for that one?  Is this a good plan?  Keep reading here to see what I decided to do and you can decide if it is right for you.  I have to say, using the trail runs is certainly not a bad way to get faster….