With another win at the USA National XTERRA Championships I can claim the European, Canadian and now the US Championships titles, all in one season.  That in itself is a first for me in my career and feels pretty good.  The only way to make it sweeter is to add a Worlds title to the mix.

Everything I have done in the last ten weeks has been with that in mind.

I was absolutely ready to race on Saturday at Snowbasin Resort in Ogden, Utah.  The weather, scenery and company for racing was fantastic!  I summoned every stubborn bone in my body to suffer in order to take a win.  I did not have a 100% day but I did have 100% motivation to make it happen.  It has been a long time since I have been able to bring this much mojo to a race late in the season and I really wanted it, bad.  So I went out there guns blazing to take it.  It was a hard day but a great day!… READ MORE 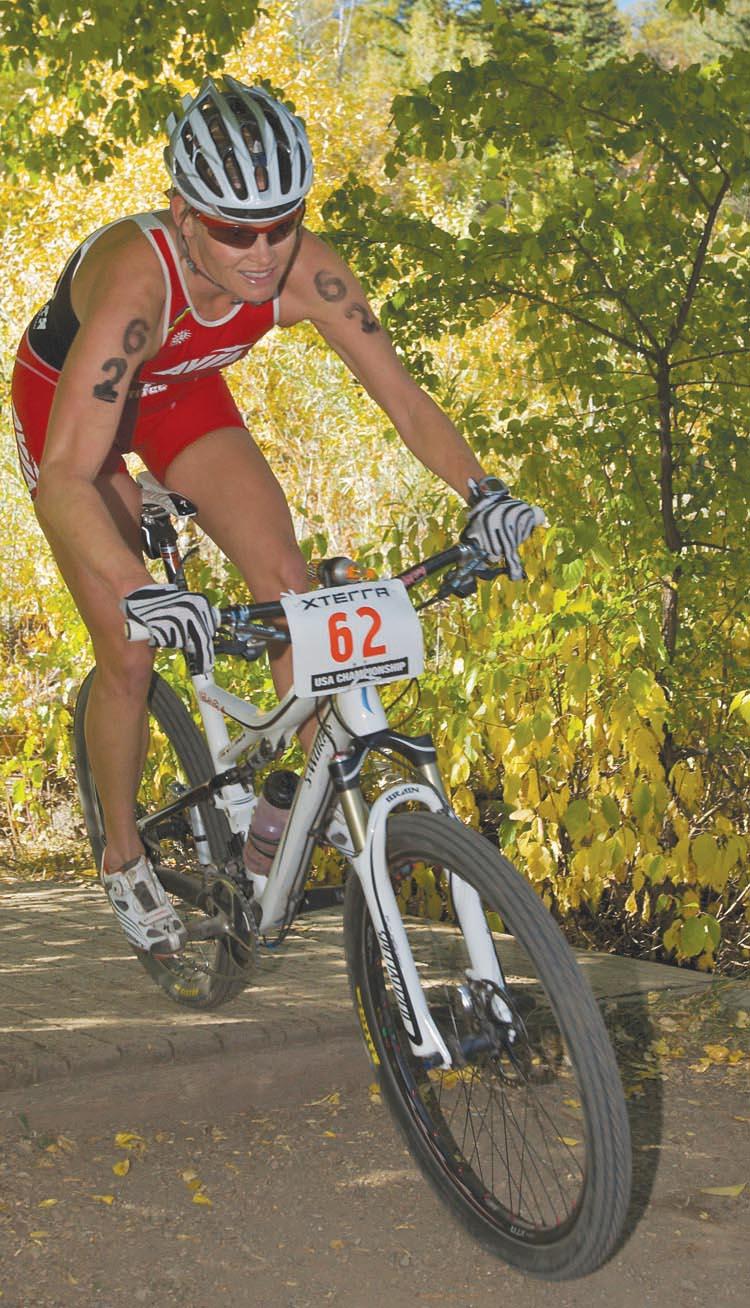 After diving into Pineview Resevoir in perfect 66 degree water as a giant mass start I had my first great swim of the year.  Christine Jeffrey still took 2 minutes out of me despite that great swim and my second woman out of the water position.  I wore a Wahoo Profile wetsuit which is a thinner version of suit which seemed to work much better for me.    She was riding really well so when I caught her, she stayed with me for a while just to make me nervous.  Then Will Kelsey blew past me like I wasn’t moving which was unexpected as usually I can stay with him.  He had a phenomenal race so congratulations buddy!  What a breakthrough.  As for me, I felt like there was a noose around my neck from the 7000 feet and higher elevation on Saturday which was unexpected as I had two and a half weeks to acclimate.  I guess it was just my feeling on the day…my body was begging for more air.  My legs were still working on autopilot so I did hammer out the fastest bike split on the new course despite whatever feeling was messing with my head. The best part of the bike segment wasn’t my legs but my bike!  Have I mentioned just how amazing the new Shimano XTR is? That stuff is money.  I rode a 26 inch wheeled  Specialized Era with Maxxis Crossmarks so a light, responsive dual suspension was the fastest bike of the day.  Take that, hardtail 29er types.    That said, C-Rad rode a 29er Epic which is the bigwheel man version of my bike so I might need to give one of those a go.

Back to racing:  I kept telling myself to just get to the run because once I was running I was sure I was going to put that race to bed.  I grabbed my AVIA bolts and was off with a bunch of dudes I had been riding with.   I think I put my Nathan race belt on backwards because I had about a million people yelling at me about my number.  Oopsie.. I guess I was in a rush!  I ran steady up the hill where Conrad’s girlfriend Amber told me there was no one in sight so I settled in for a strong run.  Unfortunately, I had put my glasses up because they were dirty so I was kind of blinded by weird light and stepped on a rock awkwardly less than 2 miles in to the race and it appears I sprained my foot**.  After the race the medical team thought I broke my toe but the new update is a foot sprain so no broken anything!  So after that happened my left foot had zero stability in any of the rocky, technical singletrack that made up 90% of the run.  That was enough to inspire a bit of panic but I was fine in the straight fire road sections and most of the smoother downhill that made up the last mile or so of the race.  Despite spending some of the time I had in the bank like a drunk guy spending money at a stripshow while tiptoeing through the singletrack I held on for the win with 1 min and 43 seconds to spare. 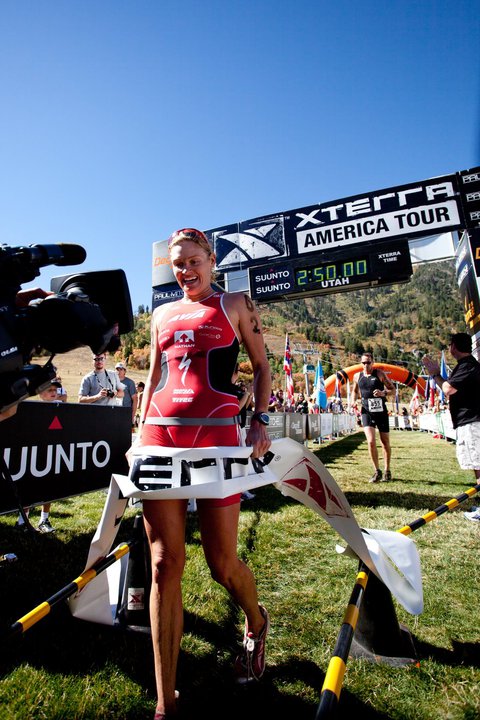 Little did I know speedy Lesley was rocketing her way to the finish with the fastest run split taking second from Shonny who was third but with her consistency had the most points in the series.   Jenny Smith took fourth and Christine Jeffrey earned fifth place in the race and in the series. 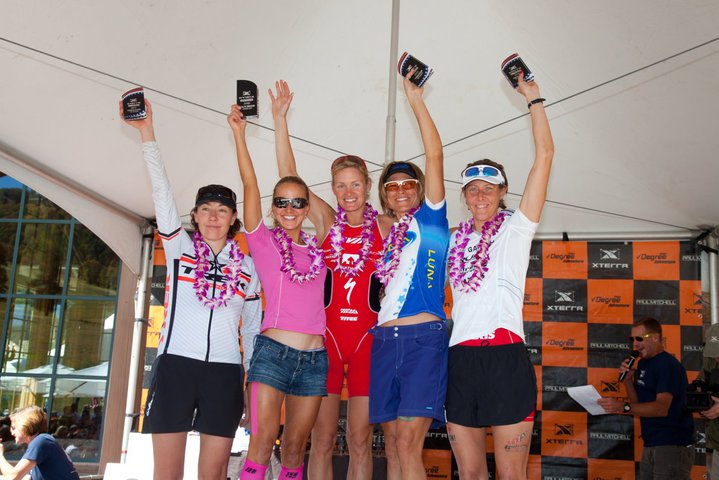 My Specialized teammate Conrad won the race and the series in a barnburner with Nico Lebrun, Josiah Middaugh, Dan Hugo and Felix Shumann rounding out the podium.  Josiah Middaugh is again the USA Champion and well deserved given the guy raced with pneumonia!!

If you want to read all about it from the XTERRA pressroom click HERE.

The happy news is that part of my three week trip that will wrap up on Tuesday was a successful altitude training camp that has me pretty excited about some really solid fitness that is still yet to show.  I did a lot of work up in Vail and Park City to take advantage of being up high and I am really stoked to see what I can do after some rest and some sharpening.  What I know for sure is I am super happy and excited to be working towards some of the my best form ever and it is going to be so much fun to be in Hawaii with a load of my favorite people doing what we love to do.  Four weeks to go.  Make it count!!

To the sponsors.. thank you so much.  Your tweeting and emailing support was so amazing and I appreciate it all so, so much.  Thanks to Nathan, AVIA, Specialized, Shimano, GU, Maxxis, Profile, USANA, ESI grips, Zerod, Sundog Eyewear, Powertap, Genuine Innovations and Procity Racing.  Honorable mention to Bingham’s Cyclery for hosting a fun pizza night with Conrad and I!  Also the MelRad Racing team was in full regalia rocking the course with Sara and Emma taking 7th and 8th in the Pro Women’s race, Fred Smith taking 5th in his pro-calibre age group and 6th overall age grouper, Meiling Yee was 6th AG, Becky 9th AG, Brian 8th AG, Greg 8th AG and Rob 19th AG.  Look forward to unleashing the team in the presence of oxygen.

Thanks to all of you and lets bring home the last title of the season!

With regards to my silly twittering.. this is the scene I was quoting from.  And yes, I think this is inspiring in a hysterical kind of way 🙂

** This is where Conrad can justifiably say I told you so.  I have wiped out in training sessions while running this course in racing flats.  Probably I would have not sprained my foot if I had worn the Avi-Stoltz shoe instead on this course and yes, I think the Stoltz is better in Ogden.  However, my entire Ogden setup was a Maui practice run so I wore what I wanna wear in Hawaii… where the racing flat will be a better choice.  So yes, Conrad, you were right 😉