Dear Canadian Triathletes:  After a decade’s hiatus, the most challenging, spectacular and exhilarating triathlon event is back to rock your world and better than ever!

It has been a full 10 years since my first XTERRA race- which happened to be in wild and wonderful Whistler, BC.  My inauspicious beginning was a sixth place after catapulting backwards on the run but my love of the sport was confirmed for life.  This year I earned another National XTERRA title with the win at the La Terra XTERRA Canadian National Championships at Nita Lake Lodge in Whistler.   With the fastest bike and run splits I took the win with Christine Jeffrey in second, Danelle Kabush in third, Joanna Harrington fourth and Tanis Tomlin rounding the podium in fifth.   There now is no contest as to what my favorite course is in the world.. although Whistler is now tied with Italy and Maui as my favorite venues the course at Creekside is definitely the best course I have ever had the pleasure of experiencing. 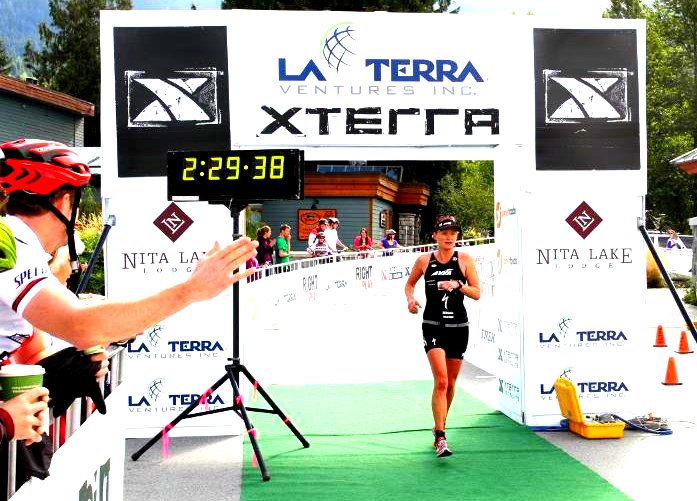 Who is the hot MelRad dude waving?  (Ross and Kerry won the relay division)

There is no better place in Canada to showcase an outdoor enthusiasts playground than Whistler, BC.   I prefer the summer to the winter in Whistler with the multitude of lakes and singletrack to enjoy by day and the world class restaurants for night.  Hanging out in Whistler is a taste of the life you would love to become accustomed to… if only work didn’t factor into the equation.  The organizing crew for XTERRA Canada did a fabulous job creating a race that showcases the best terrain that Canada has to offer with the best vacation opportunity that Whistler can provide.  The Nita Lake Lodge was fabulous.. a boutique five star hotel complete with gorgeous westcoast construction situated right on the lake with trails out the door and an amazing restaurant.  The bathrooms in the hotel rooms would rival a Manhattan apartment!   My weekend stay was so incredible and I was stoked to share it as a BFF weekend with my fun friend Tammy.  Ross decided it was too good to miss so he showed up to race on Saturday morning

Not only did the organizers offer me a nice place to stay, they provided accommodations for the entire pro field in the Olympic housing, which really showed their commitment and appreciation of all the athletes.  The benefit of that was a very strong pro field (and amateur field for that matter!) from the US as well as Canada to make the Canadian Nationals a more international affair than it otherwise would have been. XTERRA Canada is open to international athletes to win the prizes although National titles and the coveted National Champion’s jerseys are only alotted to Canadian athletes.   Josiah Middaugh won the men’s event with Mike Vine earning the Canadian title with his second place and Branden Rakita took third, Cody Waite fourth and Adam Wurth fifth in the men’s race.  Conrad Stoltz made the trip as well but a sick day netted him sixth place.

I started the day with another lackluster swim, doling out three minutes to Christine Jeffrey in T1. I was disappointed in that but really the wetsuit swims seem not to suit me.   Ross actually did a relay with Kerry Spearing, who beat me by 30 seconds out of the swim so I got a chance to smack his butt as I rode by.  I started the first lap in 100% chase mode and caught her by the summit of the climb.  I had two solid laps where I cleaned all the obstacles.  The course had a bit of rain but had started very dusty so there were sections that were a little sprinkled and then dry sections.  It was hard to ride at full speed but the course was still in great condition and rideable.  There is no doubt that my racing at the BC Bike Race was the reason I rode well on this course.  Six days of solid technical BC singletrack chasing the women’s national team is the way to get good at that stuff! 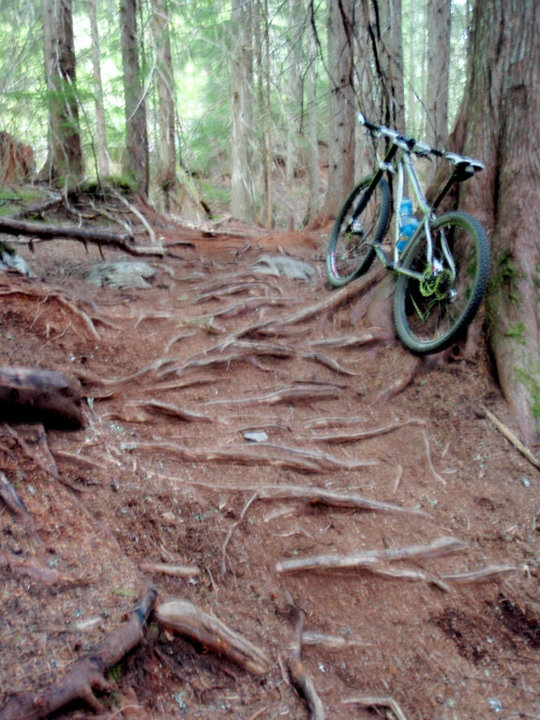 One of the root sections on Danimal Trail 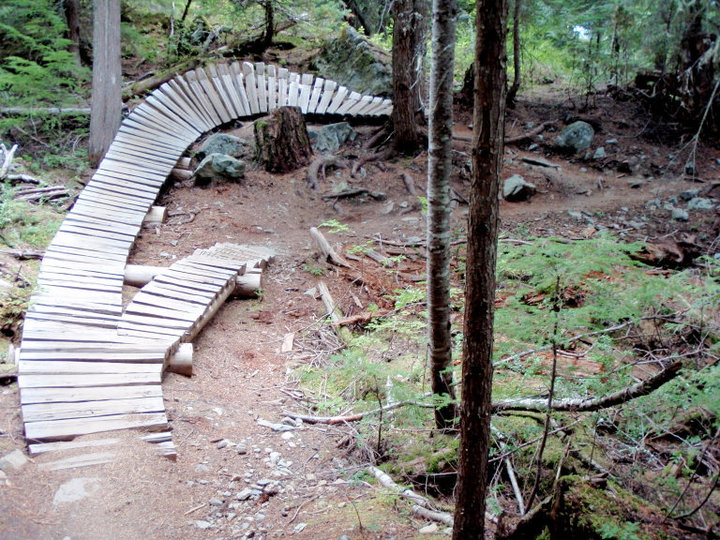 Some fun ramps on Danimal (I stole these from Cody Waite since my camera is missing….)

My run was physically solid but I did find some “room for improvement”.  I felt strong all the way to the finish despite the extra length and super steep climbs but I noticed that men I ended up outrunning by the end of the race were much faster in the technical descents and the very technical sections of the “River Runs Through It Trail”.  For all my technical skills on the bike I seem to be lacking on the run!  However, pure horsepower won out in the end as my run split was three minutes better than the second fastest women’s time but I had a rivalry with Cal Zaryski for this race and he bested me in the end with his better descending as I couldn’t close the gap down again at the end.  We will meet again in Maui Cal!  🙂

The race incorporated some of the legendary singletrack of Whistler, world class accommodation, perfect race execution, an incredible post race gourmet barbeque (you wouldn’t believe the food!) and the kind of Canadian hospitality and warmth I am so proud of.  XTERRA Canada in a nutshell:  “Come to our race which will be a real mountain bike triathlon.  We Canadians will do our best to kick your butt and then we’ll buy you a burger after to thank you for coming.”

Thank you to the Nita Lake Lodge for the incredible place to stay and eat.  Thanks to La Terra and the list of others for sponsoring our first Nationals in Whistler in too long and putting up a solid prize list.  Thanks to all of XTERRA Canada’s sponsors for believing in the event.  Thanks to my MelRad team mates Alexia, Tim, Marcus for making the trip for the race and putting in such strong performances.  Thanks to my sponsors (especially Sundog Eyewear, Gu, USANA and Genuine Innovations for offering their donations the event, and Specialized, Shimano, Maxxis, AVIA, Nathan, ESI Grips and Profile Design for giving me the unfair advantage I enjoy from such great stuff!)for helping me get to this place, ten years after my first XTERRA event, where I can honestly say I have never been better at what I do.  Congratulations to all of the newly crowned Canadian XTERRA champions… look forward to seeing you in Maui! 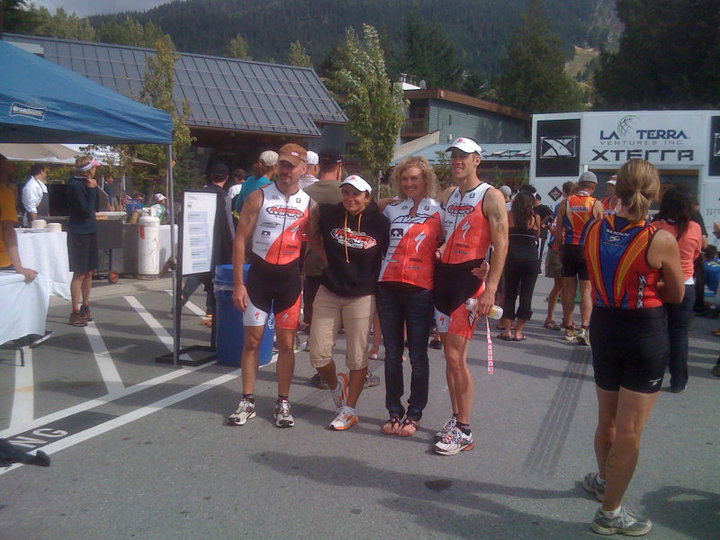 My team was awesome:  Marcus 8th in the hardest age group of the race, Alexia 5th in her age group and Tim was 2nd in his.