Contrary to popular belief amongst aspiring pros… Vegas is not the best place to accost your sponsors. The marketing folks need to give the 411 to media and the sales guys need to sell stuff to dealers. My goal in visiting the Interbike trade show was to do some sea level workouts, shake some hands, say hello to existing and potential sponsors – and attend Woody and Maia’s 5th Anniversary Wedding at the Little White Chapel. CLASSIC!

Trying to train while fitting in the visits and the shopping and the lounging by the pool was very, very difficult. Coupled with the fact I went in the post-altitude weird inability to sleep mode (there is a rumor that the air is supplemented with oxygen in Vegas to keep gamblers awake which I find hard to believe but suspect after this past trip) I was EXHAUSTED by the time I crawled back into my comfy bed in Truckee on Friday. I waited out the weekend to decide whether it was all a bad idea but given my workout yesterday I am stoked about the plan and the shenanigans as it has all worked out fine. So, VEGAS in a nutshell…. 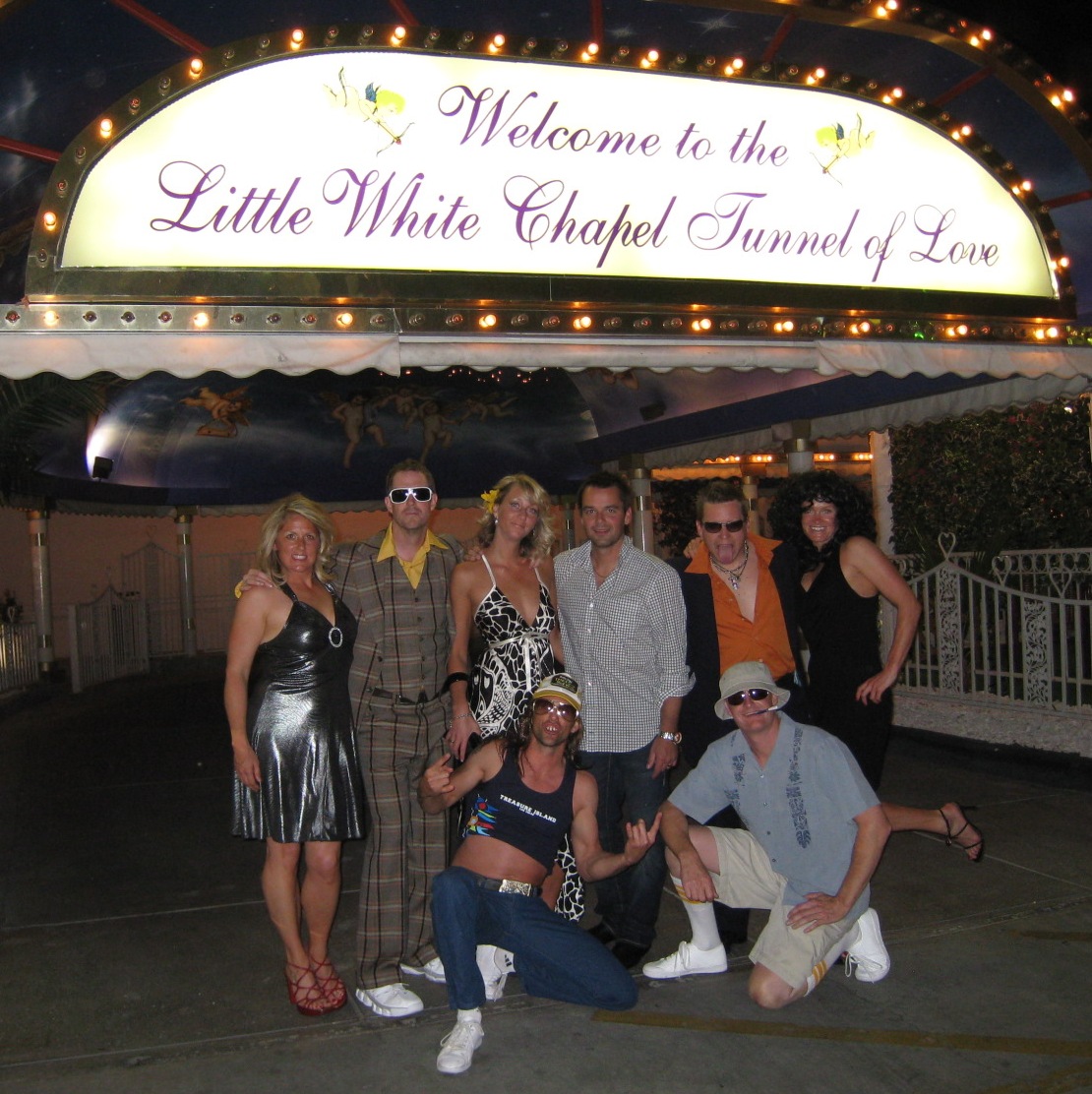 I arrived Monday night to meet Ross at our hotel – The Trump! Deals abound in Vegas this year so we got a decidedly sweet hotel for low dollars. This year I had no reason to be at Vegas…other than to look around at some potential sponsor equipment and join Ross since he was there to look at stuff for Procity (the bike store he is a minority stakeholder in with Troy and Bill http://www.procitytrek.com). I used the week as an opportunity to get some intense workouts at sea level done, see some industry friends and enjoy some time with my girls Day and Maia (Bill and Troy’s significants). I felt like a lameass half the time because I was the first one wanting to go home every night, I was always careful how much I was drinking and I missed half the fun during the day due to training. Don’t mind the sacrifices we make as pro athletes…. really, it is our FRIENDS that make the bigger sacrifice. Keeping us as friends when we are such lame-Os is what I really appreciate in my buddies. They were very good about being understanding when I was home in bed at a still unreasonable hour.

The defining workout of my Vegas week was on the new Saris Powerbeam. Saris has come out with a load generating trainer which they launched at Interbike. I NEEDED to use that trainer while I was there. My only option? Grab it at 6 pm on Wednesday and return it by 9am on Thursday. I said IMPOSSIBLE in Vegas but I got it done. Getting up at 6:50am in Las Vegas sucks ass. Pardon my French. It was awful getting up that early, my dinner that didn’t happen until 10pm the night before was ready to come back up with my heart rate at 190 bpm at 7:45 am but I beat the crap out of that workout and got it done. Then I lay on the floor for awhile while Ross returned the Powerbeam to Saris. This pro athlete thing is a team effort I tell you. My report on the Powerbeam – it kicked my ass in a good way. Love it! I love the fact there is only a power cord, the rest is wireless, the display is simple to hook and unhook on your bars, I could figure it out with minimal instruction and it was very consistent with my Powerap SL2.4. All in all…. I give it a 5/5. I would suggest inflating your tires more than I had because riding a trainer with low pressure sucks anyways. 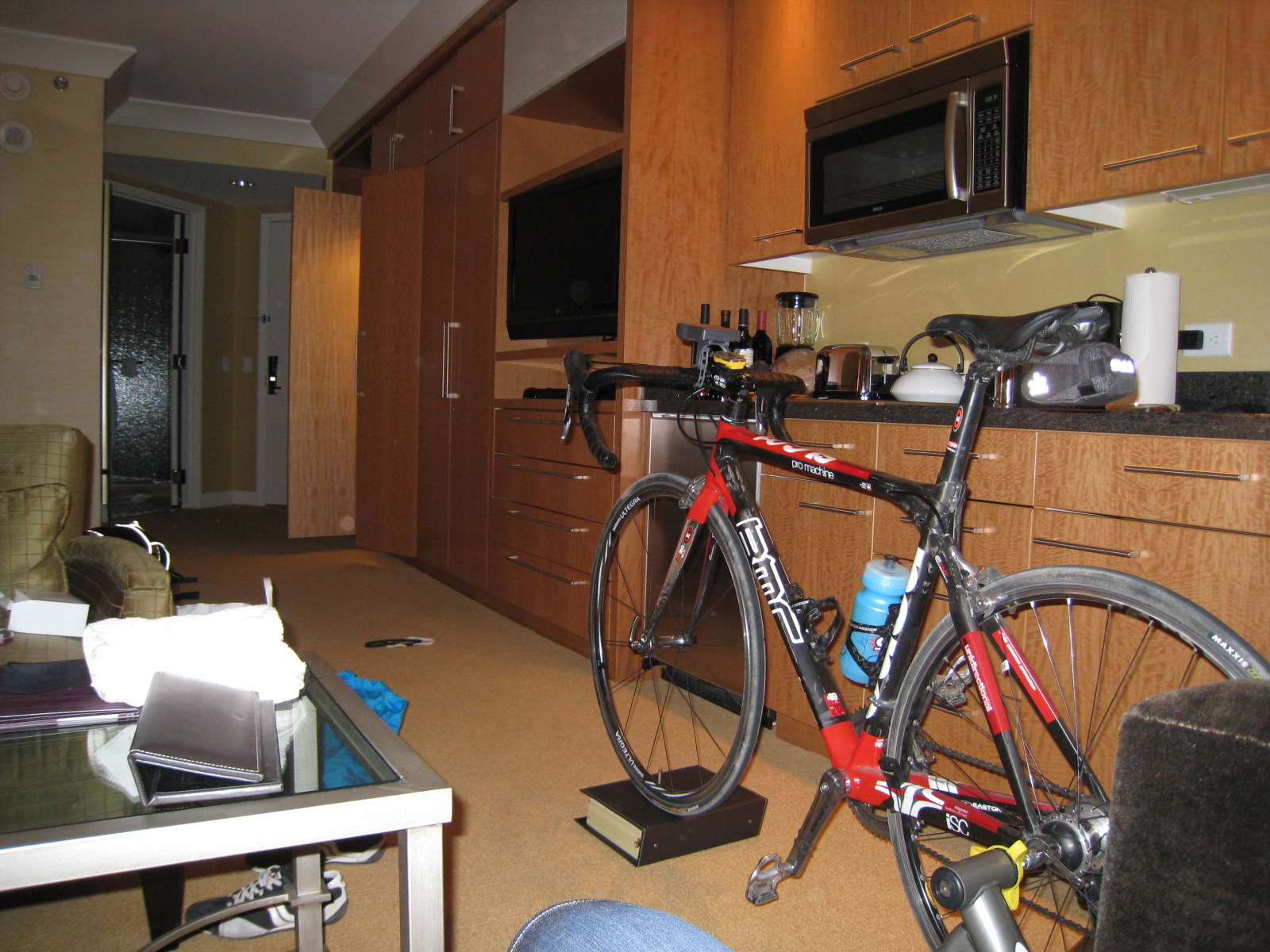 The defining evening in Vegas was the wedding. No trip to Vegas is complete without a theme night and a wedding. Troy and Maia were doing the wedding so it was up to the rest of us to be an appropriate wedding party. The photos tell all. Ross was accosted by every woman in Vegas in the plaid suit. Maybe the size 15 Adidas were sending a message they couldn’t resist? He was having more luck with the ladies than cousin Ernest (Johnny). The funniest was Hunter S. Thomson though. Holden and Johnny were in character the entire evening which was the funniest thing I have ever witnessed. What can I say? A picture tells a thousand words…. I would say I was almost a bit self conscious when people were looking to see if they recognized me and when Sean from Lazer did I was worried.. but he said I was looking good (Vegas good) so he was either drunk or lying…. You never can tell. 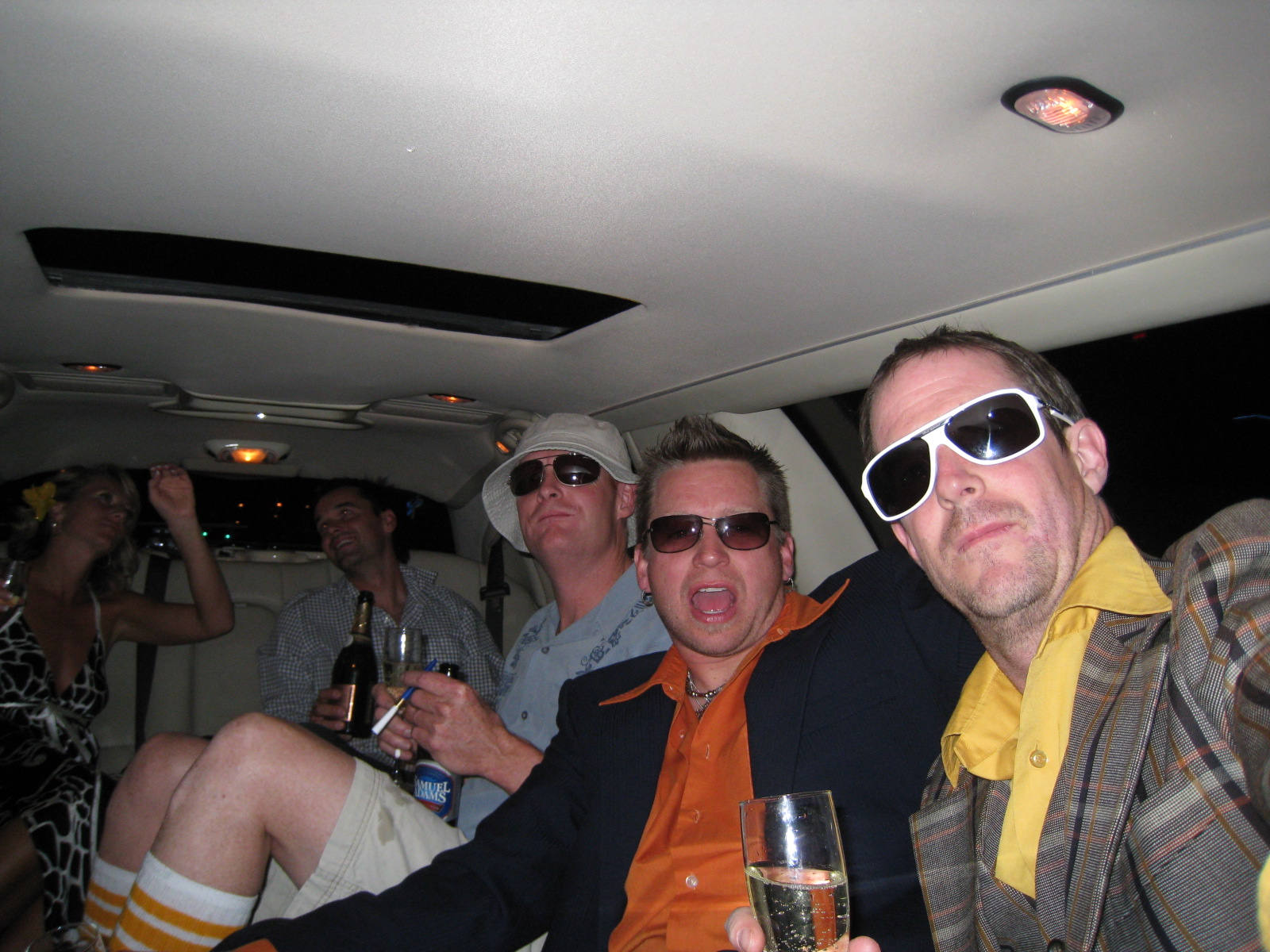 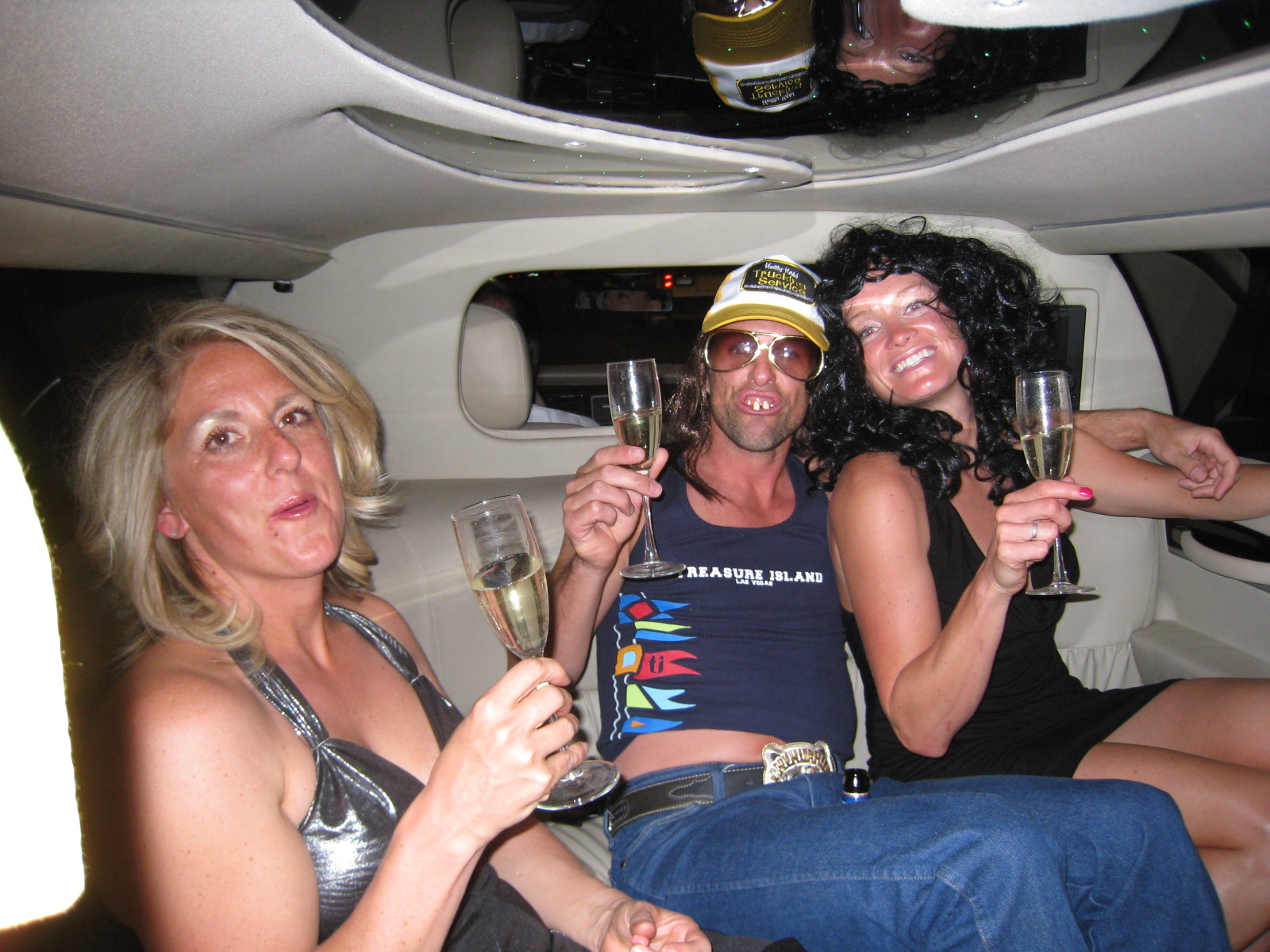 Day, Johnny and Mel in the limo on the way to the wedding… 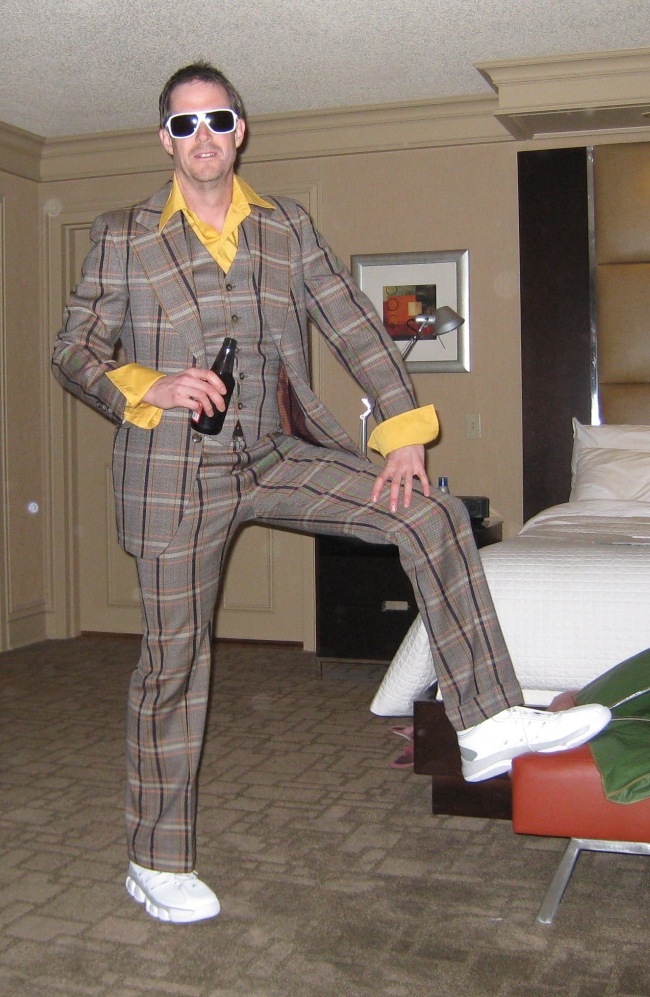 Ross was HOT in this suit…. 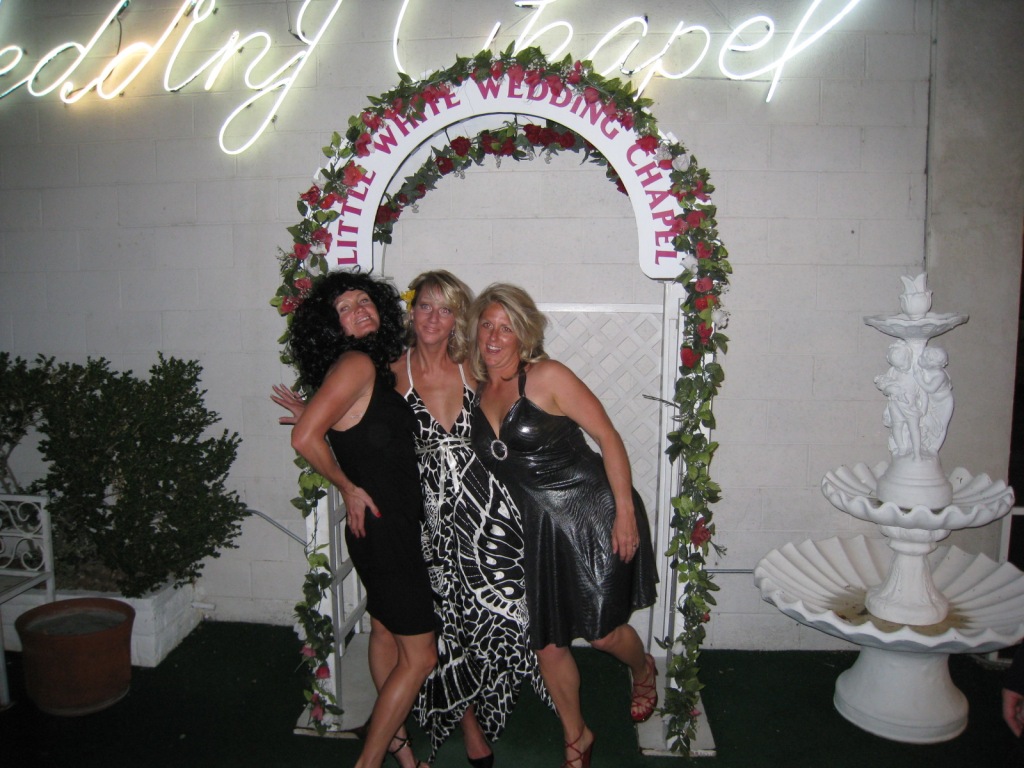 Maia and her wedding party…. yikes! 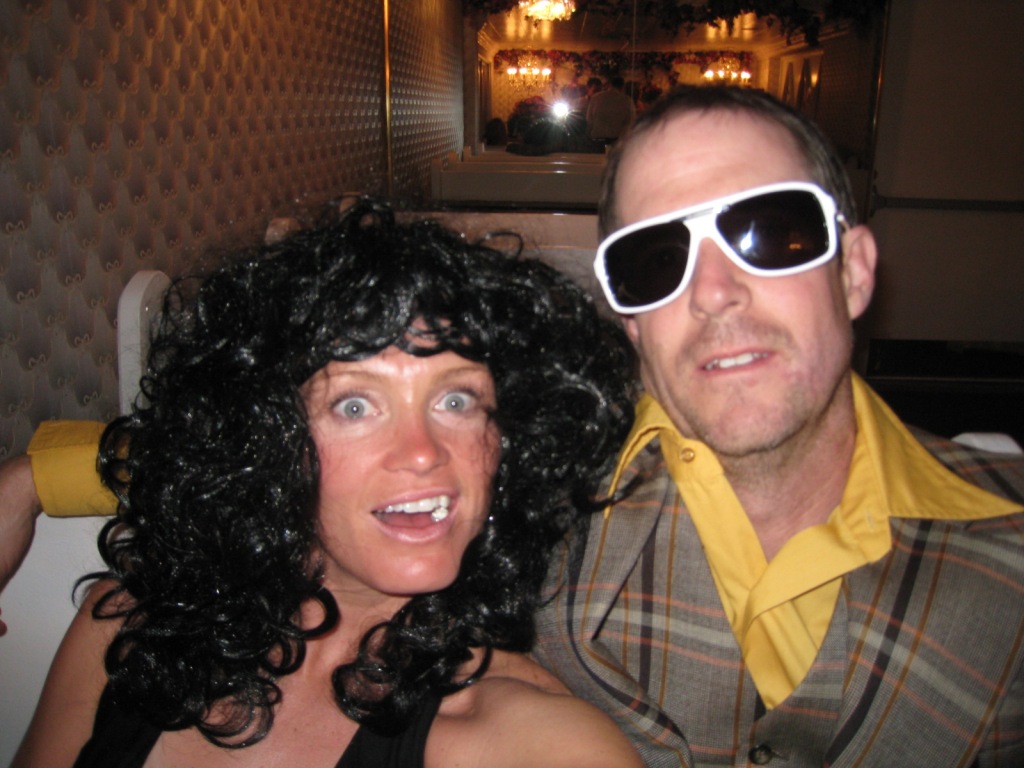 I think the gum really finishes off this trashy scene…..in the pews at the wedding ceremony with Bill crying so loudly the pastor had to ask him to be quiet.. ha!

So Ross and I got back to Truckee on Friday. We rode the course on Saturday cruisy and Chris Jeffries and I had a sweet speed workout in the pool afterwards. I was throwing down 50 yard times I haven’t seen since Maui last year. I was super happy with that given we were at 6,000 feet. She still worked me though. Sunday was a key workout to see whether I had screwed myself or not with the top loop of the Flume and Rim trails at race pace. I went two minutes faster than last week so once I taper it should be all good. Finished the loop doing the rest of it (including all of the distance to the top of Tunnel Creek and back super easy) in 2 hours five minutes. I think that the winning form for this race is going to be fast. Knowing how fast Shonny and Jenny are, and how well I am going right now, super sandy or not some kind of record is probably going to be set in the women’s event.

Decided on the hardtail for Tahoe and last week’s time was on the duallie so I am pretty sure when you add the time up Tunnel Creek riding the hardtail it will be an even bigger speed advantage. Tahoe is a road the whole way where you want your bike light and floating on top of the sand so I would say if you have a hardtail…. Choose that. Then the run off the bike in the sandbox that is the run course this year was painful but effective. It is not going to be the legspeed run we have had in the past… more like a preview of Makena Beach in Hawaii for 10 kilometers. Yikes.

So, one week to go until the big Nationals show. The women’s field is impressive. Stay tuned.