I have spent this past week in Truckee, CA (at an elevation of 6000 feet) and it has been amazing. Although the evenings are very cold, down to 29 degrees F, the mid day temperatures are late 60s and comfortable with brilliant sunshine. I also have another incredible homestay and I fully enjoyed a few days with Rick before he was off to Yosemite and then Maui for his daughter’s wedding. My hosts here are Rick and Gail, friends of Kevin from Vail, and they are super cool people who live in an absolutely kickass area. They have both gone to Maui for their daughter’s wedding so now I am house sitting the abode. And what an home it is! Actually, it is kind of fun to compare Mel’s altitude training accommodation this weekend to those of Conrad and Amber which you can see here…. One is not better than the other, just very different! I feel like I may have the advantage only because I have had a couple of reconnaissance missions on the actual race course as I too love the taste of coffee on an open fire. It is nice out of an espresso machine though….

I have also been pleased with the training thus far. Honestly, I wish Maui was next week… the waiting is killing me! I feel like my form is awesome now and I am trying not to screw it up before October 26th!! So now the game is pulling the reins in… don’t rest too much… don’t train too much. Don’t want to peak yet but also, don’t want to get so tired I can’t dig out in time. This is a scary time for me because it is so easy to ruin a year’s worth of work… but you still have to work hard to make an awesome race happen so here is a little taster of the past week… 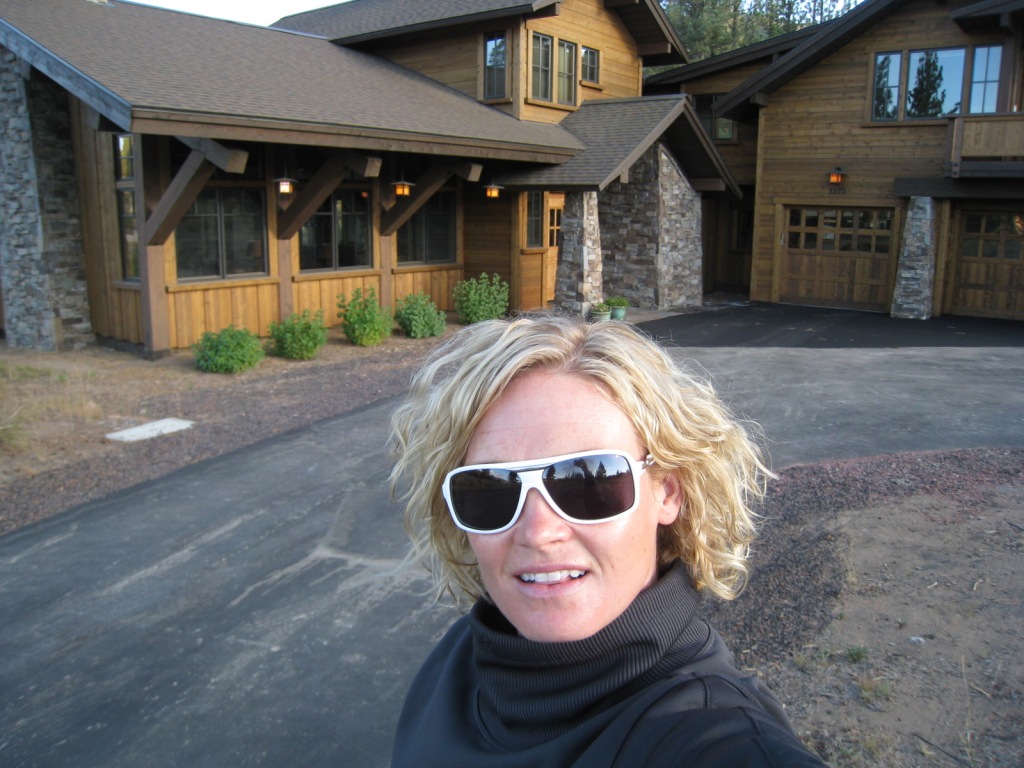 The Stephens House is pretty wicked…and you can’t even see in the GARAGE!!

I arrived to Truckee and my welcome was an amazing dinner of roast chicken, risotto and broccoli paired with a nice Cabernet from Heintz vineyards. THAT is what I am talking about! Rick is totally into healthy food, major hiking treks in remote places, and fine wines. I would say those are three winning qualities as far as I am concerned. Rick and his wife Gail have been married for 40 years, have two daughters and enjoy some amazing trips to incredible places. Three places they have been that I have identified on my top three list include Iceland, Peru (Inca Trail) and Chile (Torres del Paine). Wow. So anyways, I have now added more cool people to the people I meet through XTERRA. These two are one degree of separation from XTERRA but still it was triathlon that brought me here. 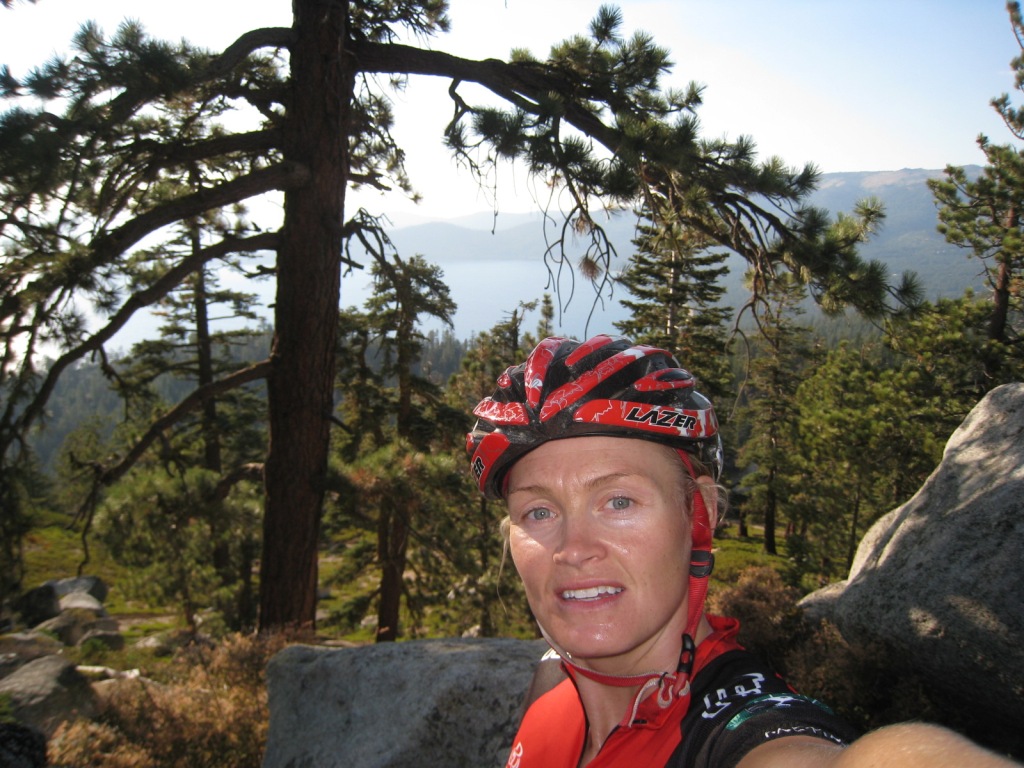 Sightseeing Thursday before really getting down to business

So when Rick left to join Gail on Maui for his daughter’s wedding I was given run of the place. Wisely I have chosen to NOT raid the wine cellar because I am sure there are wines in there that would be impossible to replace. Not to mention I am also pretty focused on going fast in two weeks. I had a fairly mellow week from Monday to Friday with only one interval run on the treadmill and a couple three hour rides, one road and one mtb. I did kick up the swimming a notch over the last few weeks with some mixed results. This week was the good results as I have been swimming the fastest I ever swam at sea level in yards but at 6000 feet. Nice. Maybe, just maybe, I can swim well in Maui? At any rate, the pool I am swimming in kicks ass and is very motivating to go to so I will be getting my 20-25 km/week in per week with pleasure this time around.

My own pool to swim in

The key workouts were on the weekend. Saturday was a ride on the course with the planned work being one lap of the top at race pace and another at base pace before descending back to the transition area and doing a small run off the bike. This is the biggest amount of riding I have ever done here. For some reason, every year I come I feel like crap, can barely get around the course, blow at the top and struggle to finish. On race day it might go by faster but honestly this course usually kicks my butt. This year is looking promising. Despite heavy opposing traffic I stayed on task to ride the whole loop HARD in the deep, deep sand (it is super dry this year) and then actually had gas left to do another lap. It still got hard on the second lap when I was on the last steep climb up to 8000 feet but not even as hard as I found it preriding ONCE last year. I also did it 30 minutes faster than I estimated which is a good sign! On my second lap I got a little boost from some riders from San Francisco who recognized me and told me they would be cheering for me on Sunday! That was cool The run off felt good if not like orienteering since they have done a lot of logging in the forest. The run course is maybe going to be changed. Overall, it was a super amazing solid day on course. It was very motivating. Maybe I might like this course this year? I mean, at some point I would have to come around to liking it… 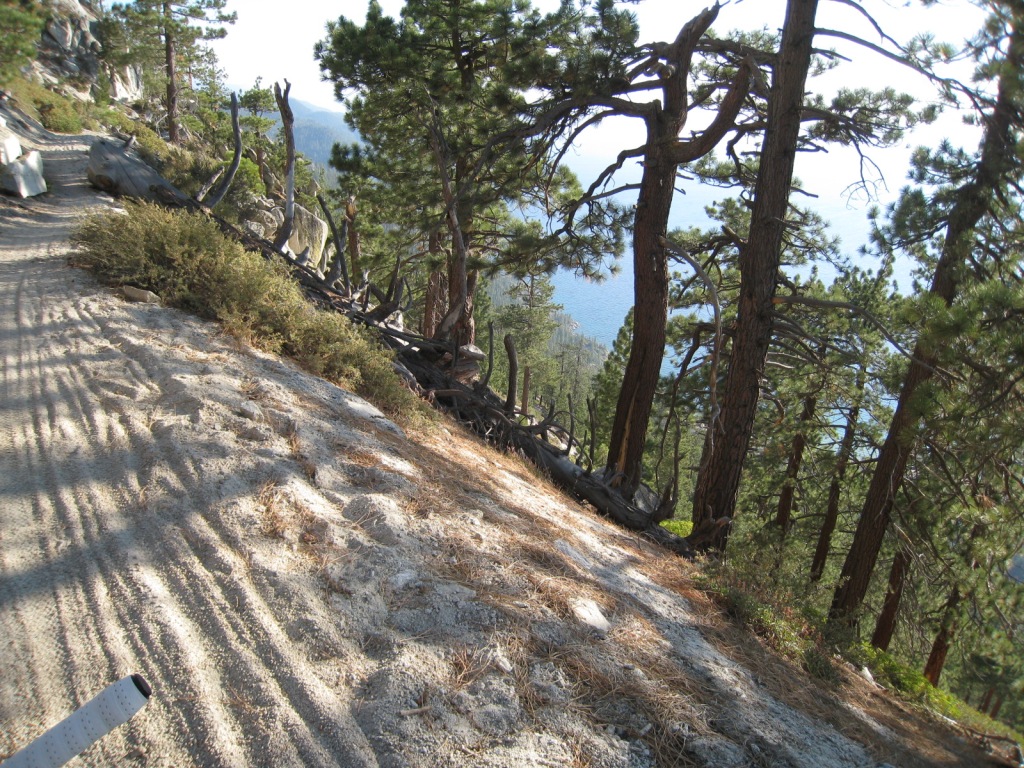 The course is very sandy and the drop to the lake is steep!

I finished the week with a strong run on the treadmill. I got some good hints from Neal Henderson on how to maintain some speed while up high so I put them to the test during the 90 minutes. They actually flew by as I had some new songs on my iPod, decent legs and a gorgeous view of the wooded area around the Lahontan Golf Course to entertain me. I shut it down after a short spin, deciding that any extra swim or bike volume was going to be crap and instead did some core and later some yoga to finish the week. 20 hours of strong work done and still feeling good.

Tomorrow I am off to VEGAS, baby! Well, I am not really going to be that cool while I am there since I plan to use the time at sea level to good advantage and train. However, I do have a wedding to go to at the Little White Chapel on Thursday so that will likely have some photo opportunities. So until then, happy training and keep rubber side down! 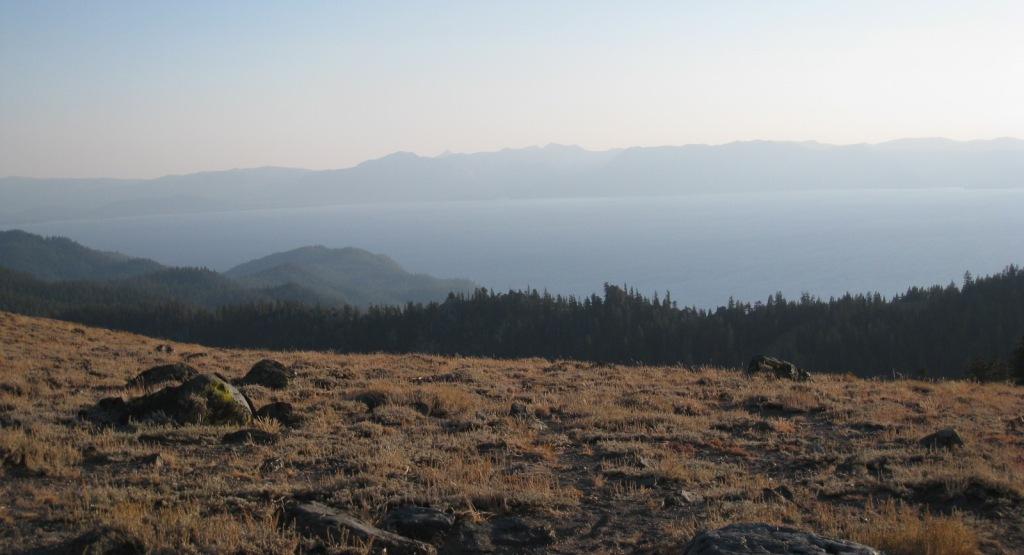 View at the very top of the course (above the treeline)