Speaking at the 2015 Triathlon BC Gala before Racing IM 70.3 Silverman, Las Vegas

My last trip took me from Vancouver, BC to Las Vegas, Nevada.  I hopped on friendly Westjet and my first stop was in Vancouver where I spoke at the TriBC Athlete Gala.  The gala is a fundraiser to support youth development in British Columbia so it was an amazing opportunity.  The event itself raised $10,000 for youth development and by speaking I was able to donate $500 to the Victoria chapter of Kidsport.  I was so happy to be presented the chance to do something for the youngsters that I train with so I flew out of Vancouver on a high.  It was a great night and thank you to all the folks that organized and attended.  I love nights where everyone dresses up, haha!  I have always been a bit of a magpie for cute outfits.  Thanks to Blueseventy, USANA and Champion System for helping me to donate to the silent auction that night! 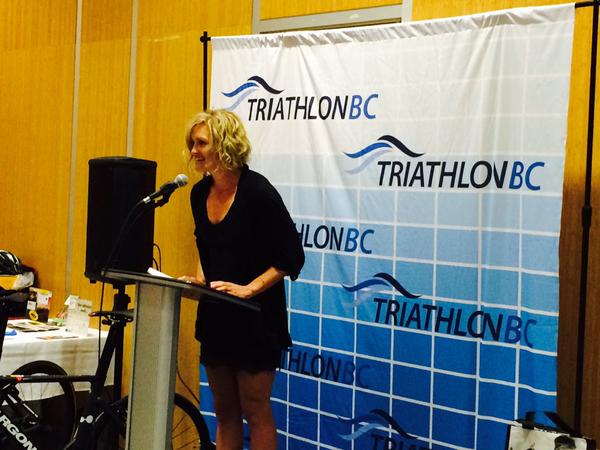 The next day I carried on to Las Vegas for the Silverman 70.3.  The spoils of that weekend went to Lauren Goss, my Trek teammate with super swimmer Heather Lendway taking second and super biker Nikki Butterfield in third.  I was somewhere in the mix of the race but fading rather than building.  It was a very tough day and finishing was all I could accomplish with my effort.  I fought hard but this was a rare race where my bike legs failed me… I stayed in the mix on my Trek Speed Concept but my Powertap Joule let me know after the race that I was riding at watts lower than what I raced at Ironman Canada (I race by effort not watts during the race-then look afterward).  It wasn’t even close to my normal pace.  I went out on the run thinking that maybe I just had a rough bike day but the run was even worse immediately.  I saddled up for a tough run because I hate DNFing more than anything and I knew there was nothing wrong with me… I just couldn’t go fast.  I made the most of cheering for the girls around me in the race and enjoying some of the fun banter from my fellow competitors on the day.  I had a conversation about my awesome Rudy Project glasses on the course which was fun!  Lots of people had amazing days and equally as many had below expectation days.  No point panicking about one crap day and it is much better to just be a bit overcooked than injured or sick.

I stubbornly maintain that the race course at Ironman 70.3 Silverman is well suited to my ability.  A hard, windy bike course is always right up my alley and the run being more about strength than absolute speed is usually good.  I have to guess that having completed a four week block of Ironman training in the last five weeks leading up to this race for Arizona I thought that the trailing volume would really set me up for a good day on a course known to challenge strength more than speed.  Coming in I was showing signs of significant fatigue at the end of that block, which was a bit more ambitious than my Whistler training, and it is clear that I was pretty tired.  I couldn’t even get close to half Ironman race pace. 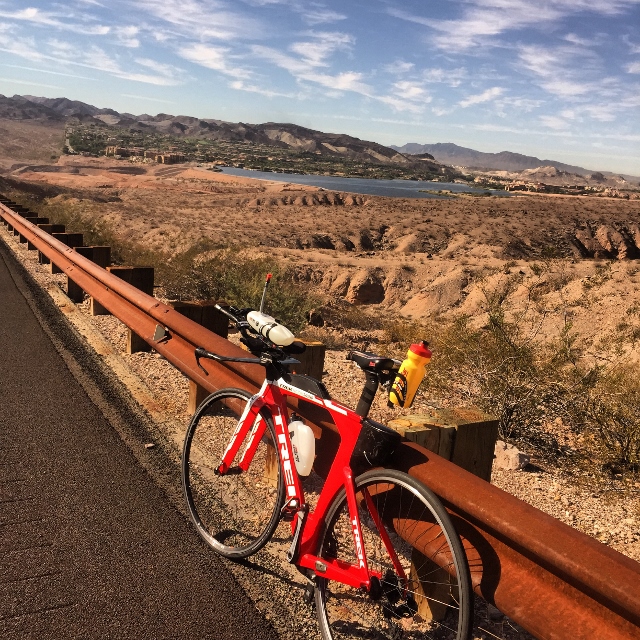 Ironman (and I mean full Ironman training) is overload and extreme training where you just push through fatigue for weeks on end.  Looking at my plan now in hindsight, and comparing it to what the more experienced Ironman girls do, it looks like it was super poor planning to come to this race while I was in the middle of building to the race in Arizona.  I completely underestimated how much time I needed to come back to life and training in the  extreme heat in the days leading up delayed that recovery further because I was worse than when I left Canada.  Frankly, I was in no shape to race that field.  Lesson learned.

Even if I am a “mature” pro this is trial and error for me.  Luckily there is still a lot of time before Arizona and I am already forgetting this race happened and moving on.  I am guessing that Cabo will go a lot better if I just rest a bit.

I did get a chance to chat with some parents who were racing and cheer for their kids at the Ironkids event.  This is such a great idea and it is great to share the fun of racing with such young kids. 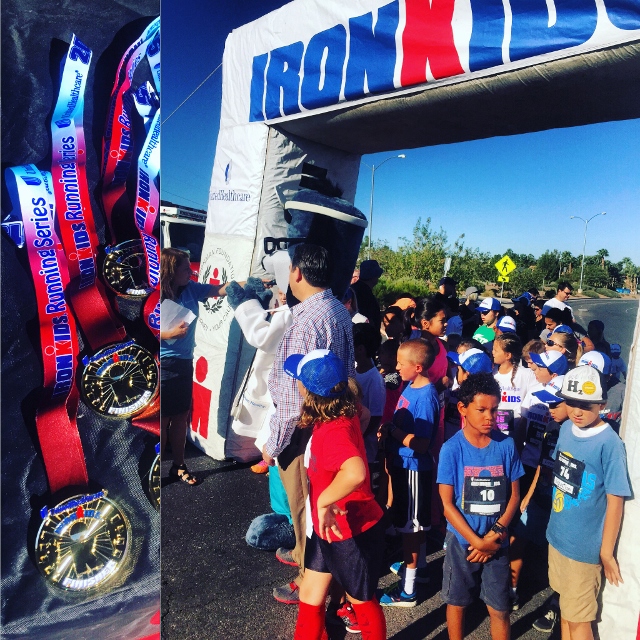 I will remember my fun week with my host family John and Laura Mercer.  These guys are gearing up for their Ironman in Kentucky and I am not surprised at how much they know about Ironman and how hard they work to get there.  John is a bio-mechanist at UNLV so it has been great chatting with him about training and some of the studies they are conducting.  One of his colleagues Tedd Girouard took me out riding on Tuesday on the course which was fun.  Tedd had a fabulous race and is off to Australia next year..way to go Tedd!  It was very interesting to get their perspective on the sport.  John has been doing triathlon since the 1980s so I wasn’t sure there was much I could offer in terms of advice but we did have some good chats looking at the sport from a variety of perspectives. 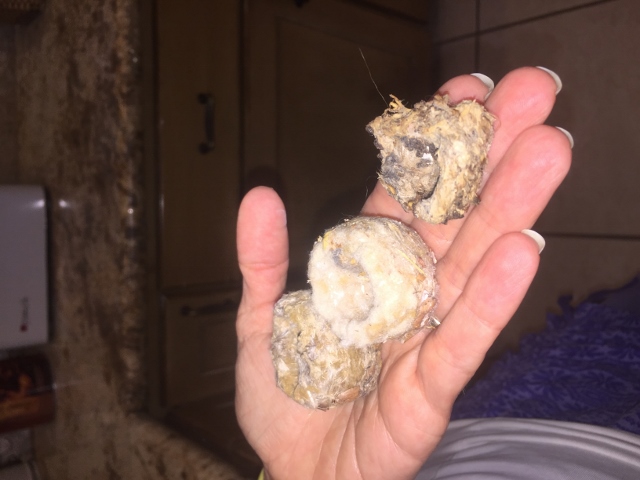 Having trained in Vegas for over a week  I see why Angela likes riding there.  There is a lot of open space, big hills and long flat road.  The problem is it is baking in ridiculous heat most of the time and that killed me.  Who knew they would have a heat wave in September and hit an all time high for the end of the month?  Not a problem if you want to be good in the heat like she is.  I had some new life experiences, like finding a scorpion in the dark with a black light (they glow bright green!) which was neat.

So lots of good times in Henderson with the rescue animal menagerie and loads of intelligent conversation with my amazing half Canadian/half New Yorker family.  They even cheered for the Seahawks with me.  #KEEPERS.  This was one of my best trips to Las Vegas even if I am going home with just a tan and some extra heat acclimation.

Thanks very much to my sponsors who allow me to go out there and push my limits and also help to give back to the community at large:  Blueseventy, Champion System, Rudy Project North America, USANA, Trek Bikes, Shimano, Bontrager, Powertap, Asics Canada, Frontrunners, and Synergy Wellness.  It isn’t going to be long before I get another chance at a race so I will be reassessing the plan to make sure I am at my best for Arizona. 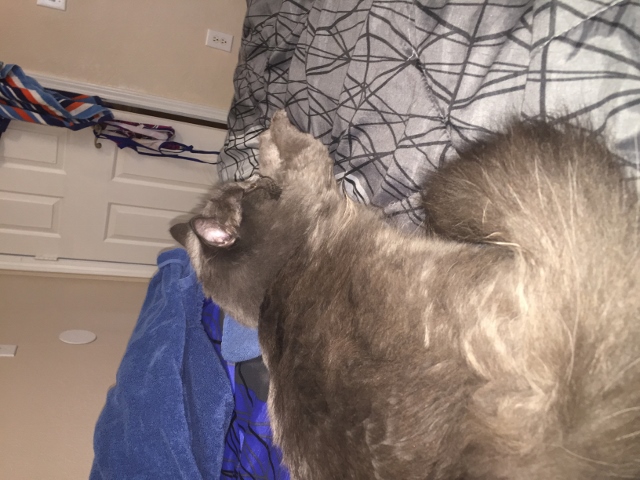 This is Spartacus.  He helped me try to get the most out of my day by sitting on my butt for more of it 🙂