Trekworld is Trek’s own personal Interbike trade show.  Given the range of offerings from Trek and Bontrager it is a no brainer that Trek avoids dragging all of this stuff across the country to Las Vegas and instead has their own open house in Madison, Wisconsin to show dealers what is coming for 2013.  Madison is also a cool place so I am sure Trek dealers across the country look forward to this annual event.  This is my first time at Trek and Trekworld.  I was invited along with Chris and Linsey, some of the mountain bike team including Aaron Gwin, Heather and JHK, Katie Compton, Jens Voigt, Melissa Stockwell and some of road people including Axel Merckx and the Trek Livestrong U23 guys plus more.  There were loads of memorable moments so I will summarize how the quick trip went.

First, I wasn’t sure if I was going to make it on the trip.  The Saturday before I left I had a long ride plus a long build run planned and on my way back from the ride I was stung twice in the face by a wasp or bee right on the eye.  I was sure I was going to turn into an alien.  MC was awesome and went to get Benadryl for me while I sat on the floor blown to bits feeling sorry for myself thinking about how I was going to meet everyone with a swollen face and immediately dreading the run.  I took the Benadryl and then opted for the treadmill just in case I blew to pieces and ended up 10km from home unable to return which turned out to be a good option .  I got the work done before starting to feel really crappy as the bee venom attacked me.  The post run fallout was extreme.  I don’t know if it is because I am super allergic, which I am or whether it is because of the anti histamine but I could not sleep, had massive skin aches and a huge headache all night. I thought I had come down with West Nile, ebola or at least swine flu.  I was very apprehensive  of a day of travel.

So the next day it turns out I did not have ebola which was excellent news and I arrived to Madison to head to a fancy party at John Burke’s house.  This was a pregame warmup for the next two days of Trek happiness.  Lots of excellent toys, super fun people and good times were ahead.  Good to see the boys from Elevation Cycles although that did mean explaining again what happened in Colorado which has now become somewhat comedic relief for every conversation.  My face started puffing up that night but oh well, it was just ugly for the photos 🙂

The triathletes started the next day with a swim at a local health club followed by a morning touring the race department and the other awesome spots at Trek.  Highlights of that day included riding the new Superfly SL 29er which is ridiculous awesome.  Lowlight included crashing the new Superfly SL on a logride because the log seemed like it was coated with ice.  Oops.  I have to say I was so excited to be riding the stunts in the super fun Trek trails after quite a long block of road triathlon racing.  I do heart offroad more than road at the end of the day, despite how exciting the long distance road format of triathlon is.  It just can’t compare to how awesome riding dirt is. 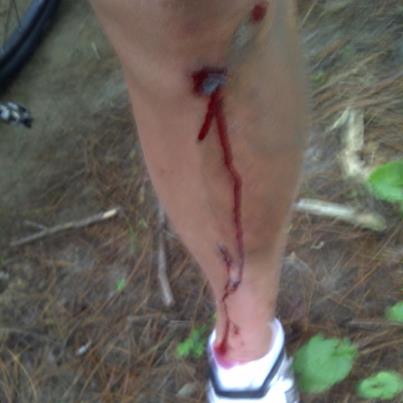 You aren’t testing product hard enough if blood is not drawn.  Poor Renegade Hilo got a little stain 🙂

That night we went to the expo and saw all the new offerings for 2013.  We also were introduced to Bo Jackson and Melissa Stockwell – two inspiring people.  Highlights on the Bontrager side for me include the new Paradigm saddle which is on my most wanted list, all of the aero wheels which are awesome, the District, all of the new mountain bikes but especially both Superfly SL and Superfly 100s.   There is so much awesome stuff it is hard to get into it all but those are the standouts for Mel.  Kirsten and Jamie, our garage door opener project is done.  Trek has designed a garage door opener that goes right in your stem cap.  They are smarter than we are although great minds think alike.

Visiting Trek was a fun review of my athletic past since I already know a lot of folks in the company from my days of mountain bike racing.  There are so many to mention but it was good to catch up with Bontrager’s Michael Browne and Trek’s Ben Coates and Dean Gore.  People I know from waaaaaaaaaaaay back.  So nice to see everyone and it is amazing how happy everyone is at Trek-it is an excellent place to work! I also got to meet Sophie who did my visa and Stacey who did my kit was a huge bonus!

Sunday’s highlight was taking the Superfly 100 out for a solid test ride with Woody and Bill from Procity Trek Store Victoria, Brandon and Chris Lieto. I got back on that log ride (essential to crush any obstacle you crashed on ASAP and put it behind you) and then proceeded to destroy singletrack at max velocity on that Superfly 100.  The improvements on the duallie for 2013 are insane… that thing is a weapon and I am pretty excited to add that bike to my quiver of awesomeness.  We also got to preview some of the plans for the triathlon future which are very exciting!

I was lucky to get bikes that were all Shimano components and I have to say even the new XT groups are quite fantastic.  I have noticed that the electronic age has arrived and nearly every dealer is talking either DuraAce or Ultegra electronic everything which is absolutely no surprise!

Now I am headed back to the homestead to finish off the prep for 70.3 Worlds in Las Vegas.  Seeing what an awesome company Trek is and all the things they are doing for us as athletes and for their dealers was really inspiring for me.  Their mission is to make everyone wildly successful which for me was a massive shot of motivation.  Not that I really needed much more… I cannot wait to get the work done for the World Championships events to come.