It has been almost two years since I have raced a UCI mountain bike race and longer since I raced the mountain bike circuit.  Racing in Fernie at the TR3 the past few days was an absolutely wonderful reunion with mountain biking in an absolutely stunning venue.  I was lucky to stay with Martin Vale’s family (1996 Canadian National Mtb Champion) along with Carter Hovey and his wife Tina (1995, 2001 and 2003 Test of Metal winner and her a former pro triathlete superstar), Roddi Lega (2004 Canada Cup champion badass) and Specialized teammate Max Plaxton (2011 Canadian National Mountain Bike Champion).   Needless to say the bar was set VERY high with that cast of superstars.  Max won every stage and the race overall while at time of publication Marty and Carter are within seconds of the Open Men TR7 lead after a 12 km detour on day 2 with a broken bike.  There were such incredible athletes and people all around me and I really enjoyed time with Tina and Marty’s wife Marlene.  It felt like a summer vacation at their beautiful ski-cabin style home.

I was excited to finish in third overall after the three days.  I was consistently strong and I felt I got stronger as the race went on.  In particular, my descending improved significantly by the end of the race.  I was working hard to climb well on all stages and ride all of the singletrack.  I was not surprised that Mical Dyck took the overall as she is an incredibly strong athlete who has destroyed this race twice in the mixed team event.  Catherine Vipond took second overall showing her form for the upcoming UCI World Championships is right on track and Jean Ann took the spot right behind me. 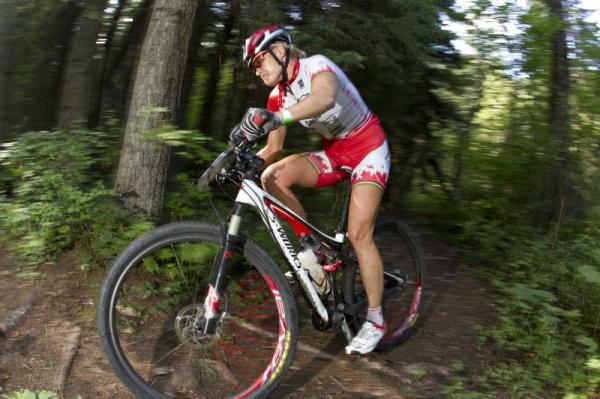 I have Aaron McConnel and Dan Savage to thank for bringing me to Fernie to compete in the event.  I am sure my form for the upcoming XTERRA National Championships is going to be all the convincing the XTERRA crowd will need to see that this event should be on everyone’s training cycle for the race in Whistler September 4th.  I wasn’t the only XTERRA regular on the startline as Cal Zaryski finished 3rd overall in the 40+ men’s event and was very impressive on all three stages.  He is going fast!

Read more for the story….

The Transrockies event is similar to BC Bike Race with the nightly awards and dinners, mass start stages, fun awesome singletrack and overall super stoked vibe you feel.  The TR also attracted some European competitors which gave it a more international feel which I really appreciated.  Although BCBR was 7 days and TR3 was only 3 I think I managed to dig an equally big hole.  Racing the current Canada Cup celebrity list over three days I was re-introduced to how hard really fast mountain biking can be.  Catherine Vipond, Mical Dyck, and Jean-Anne Birkenpas are all Canadian National Team familiar faces and are the present stars on the Canadian scene and likely soon to be international stars.  It was so much fun to go toe to toe with all of them and sharpen my skills and suffer face over three days.  Thanks to the Swiss and Czech guys for being such amazing riding partners out there!  Best of luck with the TR7!

I rode my Specialized 29er epic with the 29er Maxxis Ikon Exo tires and Shimano 2×10.  I also tried the new women’s specific Sworks mountain bike shoes with the double ratchet which were perfect for these long stages.

The first day was a 26km time trial starting and finishing in Fernie.  We left in 1 minute intervals with start positions determined by UCI points.  I was the very last starter and was shocked at how steep and hard the climbing was.  I was riding a 29er Epic with the 40×28 front chainrings on it and I was busting ass to make it up the switchbacking vertical goat paths up into the mountains.  The benefit of a 30+ minute absolutely steep and vertical climb is how well rewarded you are on the downhill.  The tight, steep, twisting singletrack in the trees on the first descent was unbelievable.  So, so much fun.  We then went into another wall of a climb, some more fun singletrack, another wall, some road, then a fast rolling singletrack back to the finish.  A rollercoaster of fast, flowy, fun trails is the best way to describe the time trial.  I thought I hadn’t had a good time because I could speed up so much when the men behind me caught up to me and I had a small mechanical that cost me time at the end.  However, I opened the race with a second place finish.  Nice.

Day 2 was the longest day with two big climbs that topped out at 7000 feet.  I felt awesome at the start and managed to sneak away from my female competitors on the first climb only to lose my small advantage when the lead moto took the top guys and myself off course.  I have the dubious distinction of being the last of the fast people led off the course.  🙂  I only lost about a minute as the lead moto turned me around right away but the best guys lost probably 15 minutes going far, far off course.  It was kind of weird getting passed by Max halfway into the big climb but fun to watch the race while I was in it!  The little detour meant me, Mical and Catherine started the next portion of the climb together.  After some battling, Catherine Vipond and I managed to sneak away from Mical and I shadowed Catherine to the summit.   The climb finished with this mushy, loamy, steep singletrack that took everything I had in me to ride up.  That climb then dropped you off the cliff into some steep, loose alpine switchbacks that demanded some attention.  I was pretty stoked to ride it cleanly, albeit slowly as I was dropped instantly white knuckling the brakes down the side of the mountain (I am afraid of heights and that stuff, no matter that it was totally safe, freaks me out!).  Sissy.  The bottom of that trail, Porky’s Blue, is a washed out off camber section that I swear took me 4 minutes to walk 10meters of because I was so afraid to fall off the side, which I watched someone do.  By the time I was down and out the last 9km Catherine was minutes ahead but I stayed solid in 2nd with Mical third.

Day three dawned and I was under pressure from the house to win a stage.  I was feeling pretty good so I thought I would open the day with a solid effort and see what happens.  The worst that could happen is a blow to smithereens, right?  So right from the gun I was at the front challenging myself to climb with the fastest guys I could.  Mical had a great start as well but I was climbing a bit faster so I managed to take enough of a lead by the first checkpoint to be out of sight.  A long vertical hike a bike later and we were on the powerline climb and I was in the fastest group of men I had been with for the week and feeling pretty good.  They dropped me on some waterbars on the fast descent so I lost sight of them before an S turn at the bottom.  Unfortunately, I missed one of the right hand turns (my Czech friends said they saw me go down and called but I didn’t hear them sadly)  and down to the bottom of that road I went.  The problem with road descents is you get used to not seeing ribbons for awhile.  When I got to a fork in the road I knew I had added another climb to my day.  I turned around and found the course again.  Shortly after I rode back up to Catherine and tried to pick away at the lead of the other two girls.  I don’t think the second half of the course suited me well.  Slow, technical and vertical singletrack without any bailout gears really wore me down and I found myself standing on the pedals just to keep moving which isn’t ideal in a hard, long stage.  Up closer to Island Lake Lodge I found myself in a section of singletrack without marking ribbons for a long time so I turned around again, only to ride back to Catherine coming towards me.  That resulted in a little more frustration with myself.  The stage finished with this hellish grass climb where we were riding a combination of 2 km/h and pushing our bikes which, had I not had Catherine with me, might have seen me stop for a break or start to cry.  It was so punishing.  At the finish Catherine could hear the announcer and launched a well timed attack up a hill that I had no will to answer.  I was happy that I was going to finish at all so fourth was awesome.  Mical had an awesome day and crushed us all to take the overall win on that day.  It was a brutal, brutal day so kudos to her for doing that.

This is the first race where I really felt that a 29er was not a slam dunk advantage and just strengthens the opinions of a lot of riders on the west coast or on the World Cup that the 26 inch bikes have their usefulness.  29er wheels are slower to accelerate and in the stop/go choppy singletrack it is a lot more work to ride them.  I also felt that the very tight, steep and winding singletrack on the first day was kind of tricky to ride with the 29 inch wheels but this was the first really technical race I have done on the 29er.  I think there is a strong case to stay on a 26 inch bike for this kind of riding.  The open sections of trail and the roads were certainly awesome on the 29er but for very steep stuff, over a number of days, maybe smaller wheels are more efficient?  I am not 100% sure but it definitely made me think.  Max rode a 26 inch wheel bike to win it all.

Thanks so much to the TR3 organization, the Vale’s, Max for driving my bike home, Specialized, Shimano, Maxxis, Sundog Eyewear, Powerbar, Nathan, USANA, Profile Design, Titec, ESI Grips, Genuine Innovations .  This was a great investment into my cycling fitness.  The next piece of my plan is to add a bit of triathlon specific training to this block by racing the 70.3 in Lake Stevens this weekend.  The whole point of the crazy Vail/Vineman double was to ensure I could maintain my pre-worlds training plan and not worry about qualification anymore.  The TR3/70.3 back to back was part of that plan.  I am not sure how fast I am going to be this weekend but that race will be a solid workout to cap this first 3 week block of training.  I am excited to see how it goes!