This past week was planned as a recovery week. The three weeks prior had built to a 28 hour week that included 20 hours of cycling, 5.5h of swimming, 2.5 hours of running, 2 hours of plyometrics and weights, 1.5 hours of yoga and 1 hour of massage. I don’t count the weight training as hours towards my season only because I seem to only count the endurance stuff. I feel weights are imperative to my season… I just only use total hours of aerobic activities to compare year to year and then seperately compare whether I did weights or not. Weird, I know.

Because I decided to learn something from my Christmas meltdown, I really did take it easy this week. I didn’t go to any group swims or rides (to make sure I wasn’t tempted to do anything but recover), I avoided the children’s gymnasium for the plyometrics (it is a very dirty place and I was afraid in my weakened condition on Tuesday that I would find out just HOW dirty) and I spent the week nights very casually on the couch. I still did the intervals that I had planned for that week (I have a 9 week aerobic build that I am sticking to) but I did next to NO volume and lots of easy everything else.

It was good it was a recovery week as by the end of it this is the view from the kitchen patio: 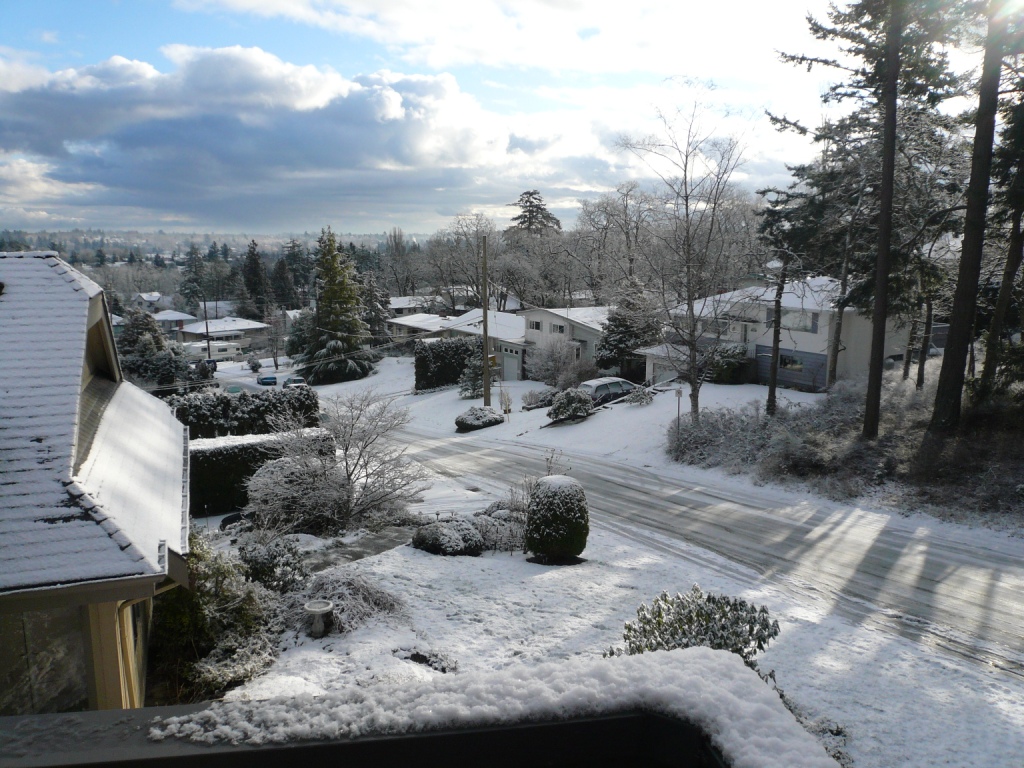 Waking up to a cold morning in Victoria

We had made plans to join our friends Jane and Mike for a weekend of skiing at Mount Washington. We met our friends Paul and Lisa when we were there so they joined us for the rest of the festivities. On Friday night we went to an incredible Thai place in Courtenay with incredibly bad service. It was awe inspiring how bad our waitress was but the Tom Kha soup made up for some of it. I would recommend take out.

Conditions on the mountain were “hard pack” on the alpine so I stuck to the nordic trails with my new mad pimpin skate skis. The first day was awesome and I put in four hours of trail exploration where by the end of the day I almost felt like I could ski. A nice lady skiing with some paralympic skiers gave me some technique hints. But on Sunday, not so much fun. The temperature had dipped to minus twelve Celsius overnight so in the morning the snow was SLOW. It was like skiing uphill the whole day. I am sure there are some people that only know slow snow… like those who are used to minus twelve, but for me, it was heinous. It almost felt like my skis were sticking. They probably weren’t even waxed for that, who knows, but it was hard and after two hours I was ready to be done. My ankles were actually more sore than anything else… I am not used to pointing my feet out like that. Unfortunately, so was Ross. Danger Boy’s rotator cuff suffered some damage on a particulary icy corner of East Bull. He was done for the day. Poor baby sat in the condo for an hour before casually asking me (cellphone) how long I wanted to ski.

So we booked it back to Victoria only to discover that the city was in chaos. I guess a bunch of wet snow fell during the day. When the temperature dropped that evening the wet snow turned to ice. The highway and the sideroads were in chaos. According to the newspaper today five accidents in five minutes occurred. Mostly it is idiots in tiny Mazda pickup trucks or Civic hatchbacks driving on summer tires. We watched a tow truck get stuck on pure ice trying to pull out someone else. We pulled out and drove around him. GO Subaru! Ross’s Tribeca was the shizzle. Anyhow, it took an hour to drive about 8 kilometers back to the house so we were pretty stoked to be home safe and sound. Unfortunately, the snow was still here this am so I guess it will be a couple days till I hit the roads again. Oh well, have to get back in the pool anyways.