This past weekend was my annual trip to beautiful Buntzen Lake to take part in Teri Taylor’s awesome offroad triathlon in Port Moody. This race has been on my schedule nearly every year since I first did it as XTERRA Canada in 2003 and after that event I went on to win my first XTERRA World Championships race. I often look at my results and motivation from this race to get a bit of a gauge on how I am going to feel at Worlds. It is a fairly late race date so to still be stoked in early September is a good sign and the course features some beautiful enchanted forest single track and a lot of loose, shale rock in sections which certainly remind me of the descent on Haleakala. I feel like racing well on this course is good sign you can race well in Hawaii.

That said, I think this race falls at a lower priority than Maui so it has the honor of being a “test” race for some ideas I have for the Maui race. I used the race this year to test how quick I can recover from certain swim and run efforts and I used it to test some equipment I would like to use later in the year. I also wanted to see how I felt on the bike after my super mega week last week. Some of the testing was good and some was not so good. Overall I think the race was great, I was super motivated and held off a hard charging Danelle Kabush for the win and managed to squeak a better bike split than Wendy Simms out of the deal. Now that has to be prefaced with the length of Wendy’s marination in Buntzen Lake- all of 32 minutes – so we know where she can improve, haha! But more on that later… it was a fun weekend and there are some funny details including a video of my first helmet cam foray so read on to enjoy… 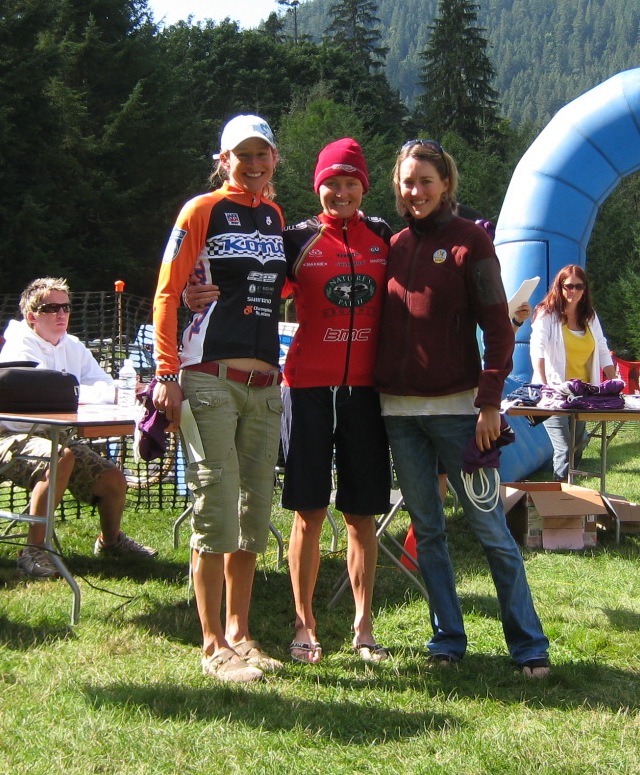 The chick podium at this year’s Nationals

My week involved a key tempo run on the treadmill and three laps of my Hour of Power loop. The run was for training and the mountain bike loops were more of a warmup to make sure I had blown all of the fatigue out of my legs from the week before. The problem was my run on the treadmill absolutely demolished my legs. They were sore to the touch immediately after and really sore the next day. When I went to do intervals on my mountain bike I set a World Record for me so I didn’t worry about it too much but running off the bike was not very good. I put a video of that ride at the end of this post for your enjoyment. I had a great massage where Markus tore the crap out of all of the adhesions and said my legs felt great but really, they hurt. Lots.

Friday morning I did my fifth hard swim practice of the week and the main set was 24×100 on 1:30/1:25/1:20/1:15 six times through. So for Simon and Brent and the rest of the 17 to 18 minute and change 1500m swimmers this was no big deal. For 20 minute Mel? My crippled and sinking legs didn’t help matters but I swallowed my ego, blew up for three rounds and then threw fins on to finish the set. I have the mini Finis fins so you are still getting a workout but really, it was a hard set for me given I might sprint a 1:08 100m if I really giver. After that I hopped on the ferry to Vancouver and upon arrival to the race course Ross and I prerode the entire bike course. Not before eating some nasty panini from the IGA store which I promptly cookie tossed back up after eating it. Don’t eat grocery store grilled paninis. Yuck.

I felt like crap riding the bike on Friday but didn’t worry about it because shortly after I was at Ross’ brother Alex’s place with his mom, Alex’s wife Alison and their daughter Charlotte enjoying some nice snacks and a glass of pinot grigio. Life it good! We had a wonderful meal of ribs and some delicious red wines and I was decidedly pickled when I finally fell into bed. When the alarm went off at 6:15 I completely ignored it until closer to 7am when I forced myself out of bed.

Half a piece of toast on the way to the race site (I tell you, the meals that matter are TWO nights before… you can have a nutritional nightmare day the day before) and a big ass coffee and I was ready to rock. I did a mini warm up on the bike and set up transition. I decided to ride my BMC Fourstroke 01 with the Maxxis Crossmark UST on the rear and the Larson TT on the front at about 29 psi because of the road sections. I thought I was going to do a long swim warm up but it turns out Ross had an opportunity to do a relay so I got all involved in getting him rolling. Brock did the swim, Ross did the bike and Kelly Guest did the run (after running the 10km in the morning first) and I got about a 300 m warmup.

I had less time to warm up in the f-f-freezing water but I think it was enough. I wore a smaller Profile by Aquaman Goldcell wetsuit and I think it was much warmer. I lined up somewhere in the middle of the bunch hoping to hold onto Stephan Jacobsen’s feet to the first buoy. After the start and being drowned and pawed and worked over, I found myself in a reasonable swim pack but not on his feet. I got out fourth behind Jordan Bryden (I think he took two minutes out of us), Stephan, and Andrew Sellars (I was beside some people who may have made the run to T1 faster).

Out onto the bike I took it easy on the first hill waiting for my legs to come around and then started going pretty well. I think I rode less of the course than I have in the past. I don’t know if I was just “off” or whether everything seemed harder to ride but I pushed my bike more than I liked. I still suck in flat sections but I was climbing super well and had tons left at the end of the bike to keep pushing hard (most important test in this race). I could have done another lap of the whole course the same speed I think as I was just getting going by the end. I came into T2 with Cal Zaryski and Jordan Bryden on my wheel and I was hoping to hang onto them on the run.

I fiddled with my shoes a little too long so those two beat me out of transition and threw down a MUCH faster first kilometer than I did. I was feeling my sore quads and a bit discouraged by that but was talking myself into running hard. When I was sure I was dropped and left in no man’s land I saw that Cal was not far in front of me at the floating bridge. I thought I would try to catch him on the technical uphill but in that section plus the downhill he unfortunately extended his lead. By the end of the lap I could see he and Jordan were maybe a minute in front of me but I think I shut it down on the second lap because they were almost three and four minutes by the end. I think seeing where my competition was made me relax and stop pushing as hard. Plus I was getting a blister. I know, harden up. I was happy to run that pace and save it.

Danelle KILLED me on the run, four minutes! Yikes. I beat the untrained mountain biker Wendy though. She was running in about fifty layers of clothing for some reason (rookie). Maybe it was to further intimidate me with her crazy ripped-ness by further dehydrating to have veins on her veins (I kid because I love). Anyways, Wendy is thinking more XTERRA next year which I think is awesome. Her legs are even longer than Danelle’s are so once she trains she is going to be super fast. The swimming… well that needs some work too. Note to Wendy: freestyle is a faster stroke than breast stroke. Also, wetsuits come in women’s sizes now too. 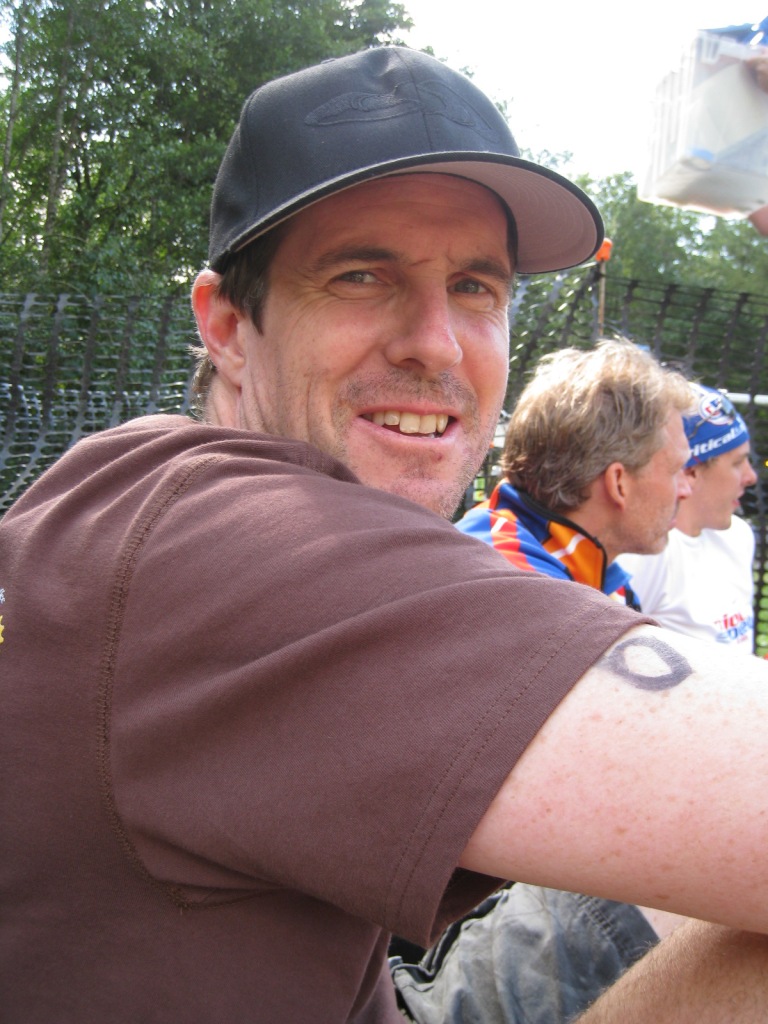 Ross with triathlon numbers on his arm…looking happy about it

Anyways it was a low key and very fun event. You need to do this race if you are in the Pacific Northwest. Yummy burgers post race, great raffle prizes and clownish behavior are in full force afterwards. It blows my mind how many fast Canadian racers there are and we don’t even have a full on race other than this one…. You wait until we get ourselves organized. Teri had 43 kids in the Kids of Steel event at her race in Campbell River which is great. This race is super fun and inspiring for me.

The race was yesterday so today I went for a forty minute jog in Capilano Dam Park and ended at the base of the Grouse Grind to head up there with Ross and Alison. Ross was a bit pooched from his effort yesterday (his relay came second…but they were beaten by the women’s team as well ) so he struggled compared to what I know he can do on that kind of hike. He made it up in 47 minutes which is pretty good given the last three days have been the most exercise he has done this month! We had fun. Alison enjoyed her first time up as well and we took the tram down for a view of the city. What an incredible day! 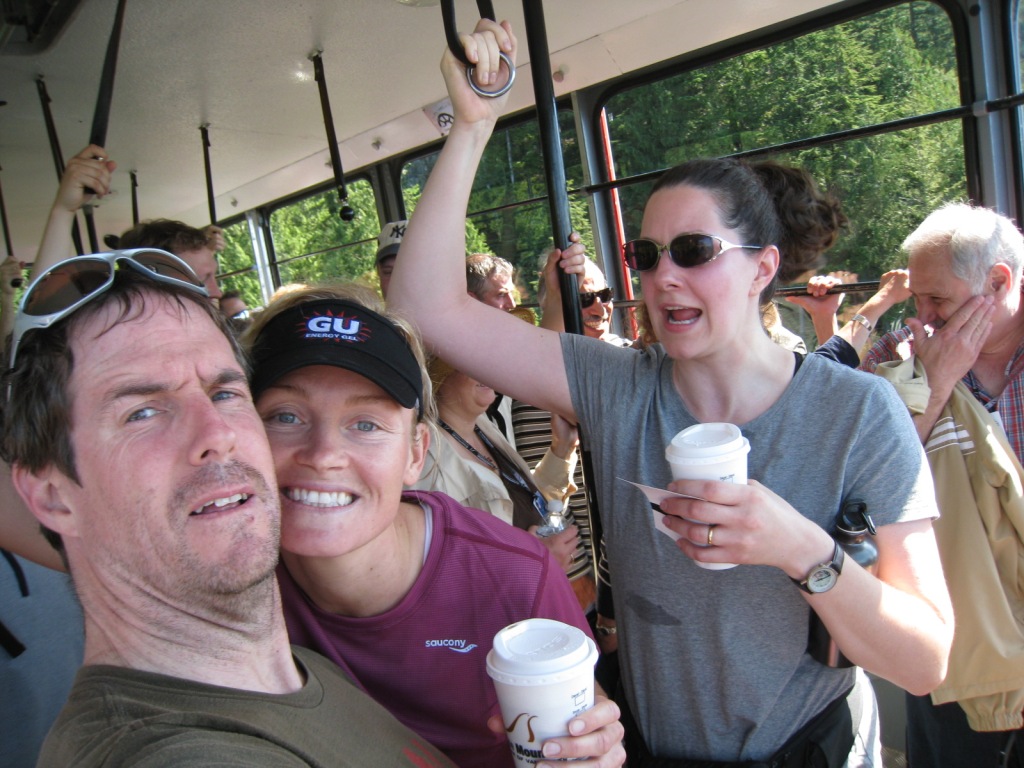 Mountain climbers on the way down

I have one more week of training at home before I leave for altitude training for Tahoe. Thanks so much to all of my sponsors who have helped me get to the place where I think I have won my sixth Championship in Canada: Nature’s Path, BMC bikes, Shimano, Fox, Sundog Eyewear, Maxxis Tires, Titec, Profile by Aquaman wetsuits, Fizik, CycleOps, Pactimo, Gu Sports, Saucony, Genuine Innovations, Albabici, and Procity Trek Bike Store. Thanks for reading!

Thanks to www.helmetcameracentral.com I can now bring you some video footage. The idea was to video the Canada course but unfortunately we forgot some of the equipment. The camera. So here is the workout I did with some “rider’s point of view”. I promise the future ones will be much better.