Sea Otter instantly becomes the Ocean Weasel when you have a bad race. This year, it was very, very much the Ocean Weasel. I went back to look at the report from Sea Otter 2006 and I pretty much could post an identical report in 2007 as I had in 2006. I was too slow, I got shelled all in the name of good training, had a decent feeling in the super muddy short track and suffered terribly in the cross country. Of course, this year I crashed hard (in the same section I crashed last year no less) and hurt myself so I had an unfortunate DNF. All I can say about disappointing races it that they are motivating if nothing else. I HATE bad races. They send me into a frenzy of recap and analysis followed by a few days of relaxation and refocusing. Although you don’t want to overanalyze bad results you don’t want to miss any lessons to be learned. If anything, I could predict what I was going to feel like given the camp I did in Phoenix. But since my swim coach Neil always says to not be alarmed if you are going fast, I always want to see if I can surprise myself. I guess not this time.

Sea Otter was mostly enjoyable because of the camaraderie I experienced with the BMC-Sports Garage girls and guys. What a super group of people! Congrats to all of them for their finishes and thanks to all of them for making my weekend much more fun. Particular mention goes to Scott Thomson… who, as the MAN at BMC, made the weekend a gong show by just being himself. Scott is one of those guys who can make you laugh in the most dire and disappointing situation. I am a lucky girl working with these people. An example includes arrival at the airport with Scott handing me a bag of Peets and chocolate. How much does that rock?

Anyhow, lots went on at the Ocean Weasel. I set up and rode my brand new Fourstroke 02 (the Fourstroke 01 is “coming soon to a store near you – in Julyish” and I will be on the Team Elite 01 in Temecula). Unfortunately, I did not warm up enough for the Time Trial or preride the course so I blew pretty much every corner and ended up 17th, 17 seconds off first. Silly little race. First unveiling of the new kit from Descente, what do you think? Pretty frickin wicked huh? 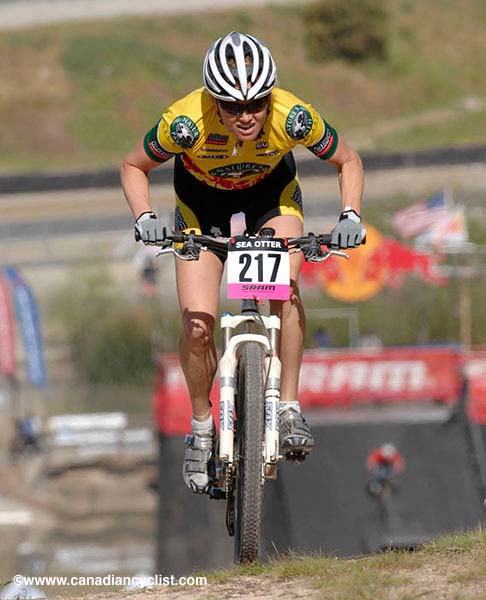 The short track was the same as last year. A muddy mess. The skies opened up in the morning and poured down the hate. On the first lap anyone cutting left was shut out, the top 8 got away, I couldn’t do a proper cyclocross mount onto my bike because I couldn’t throw a leg over on the off camber side slope (and white girl can’t jump that high) so I was getting on like my grandmother. SLOW! Katie Compton the cross queen kicked ass on 29 inch cross wheels. I chased my butt off and ended up 14th. These muddy races are pretty fun despite the mess, so I did have a good time busting my butt for that result. 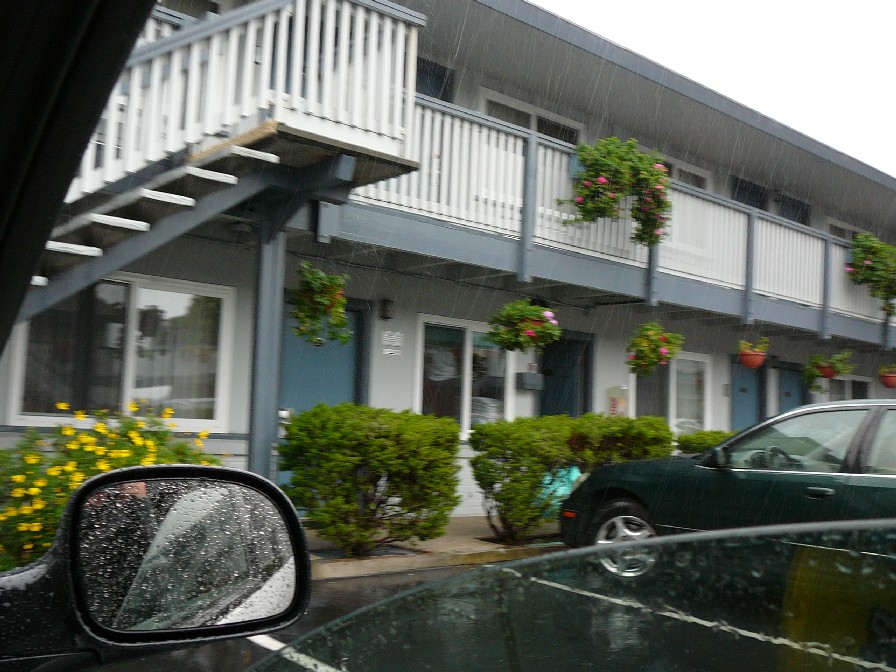 You know it is raining hard when you can see it through the lens.

The cross country was another epic affair. Crashed in the sand, hurt my hand, cue the band, this I can’t stand… a DNF. I remember not feeling 100% last year until Ogden so it looks like I am on schedule for August again, haha. Not planning to start as slowly as last year but this race is a recap of 2006. Without the trip to the podium in the short track, dadgummit. Oh well, put the training in the bank and move on. 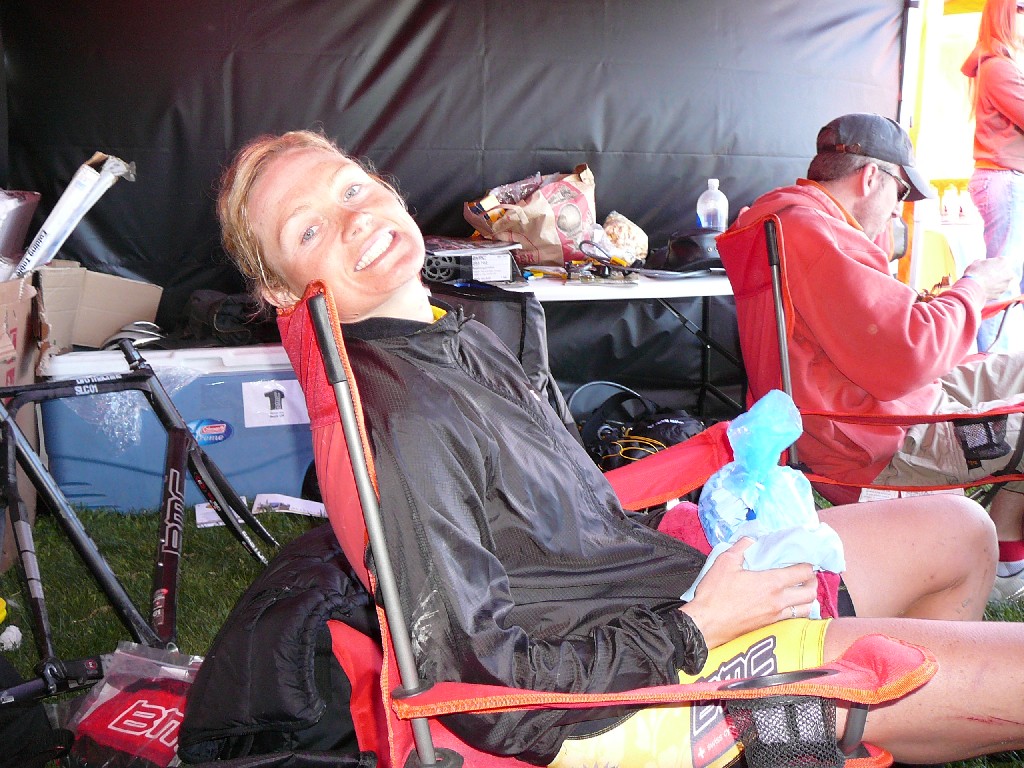 It’s only a flesh wound… icing the hand post race.

After the race Ross and I spent a day in Santa Cruz bumming around. I actually dragged him to UCSC for a swim as well, which was cool because the campus is gorgeous. All in all, a fun trip thanks to the people I spent it with, especially Ross 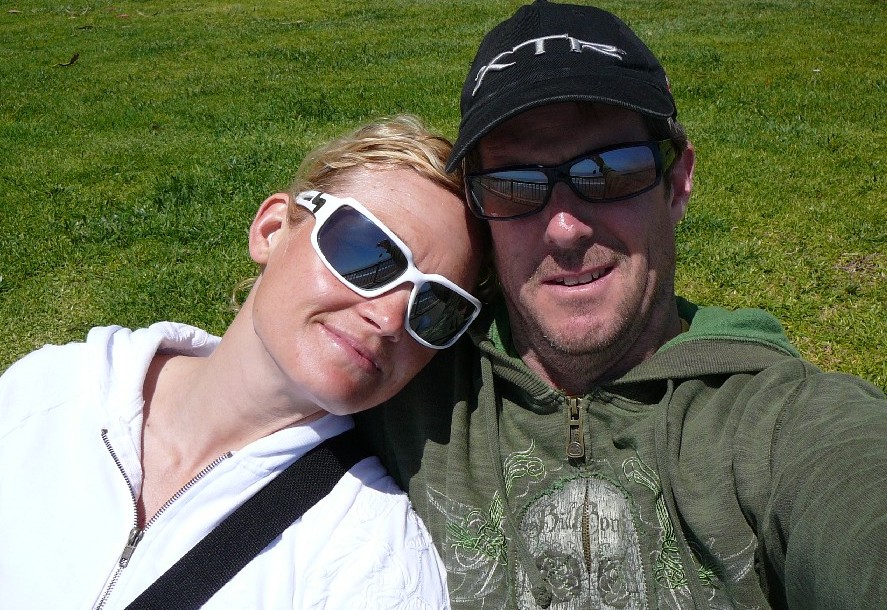 A big thanks goes out to BMC for the support this weekend and the BMC-Sports Garage crew. We had a true team environment at this race. Thanks to Nature’s Path, Shimano, Maxxis, Fox, Titec, Profile, Fi’z:ik, Sundog Eyewear, Cyclops (definitely needed trainers for this one), Descente, Lazer Helmets, Gu and Gu2O, and Rider’s Cycles. The Ocean Weasel is a stepping stone for Xterra Tour 2007 so moving on…..