Well, for a moment, I am reining XTERRA World Champion, US XTERRA Overall Series Champion and now the Canadian Offroad Triathlon Champion. Of course, I am set to defend two of those titles in upcoming weeks. 2007 was the first year we had an official Canadian crown and I get to keep it for a whole year. It was a record turnout for a Canadian offroad triathlon this weekend and both Kelly Guest and I put on a good show for race fans, lopping minutes off our last year’s times to take the 2007 titles. It was a beautiful day and showcased some of the best of Canada’s off road talent which I am sure is also a warning shot for the upcoming Maui XTERRA World Championships…the Canadians are coming! 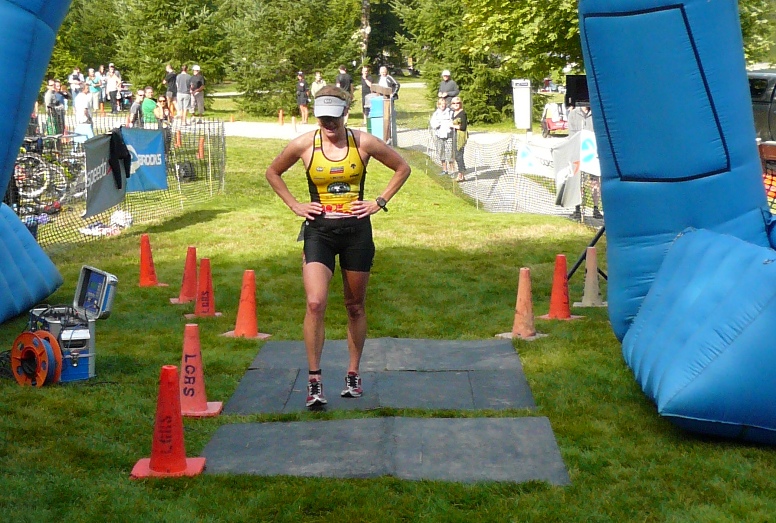 I personally love the Canadian Offroad Tri Championships course in Buntzen Lake. It is an idyllic setting with the forested hills surrounding a crystal clear lake. The course is NOT in Vancouver, really, as Port Moody is about 40 minutes outside the city and although it is a large suburb, by the time you reach the race site in Anmore you feel like you are so much further away. I travelled to Buntzen with my two favorite training partners, Mike Palmer and Sean Cruikshank, and my favorite guy, Ross. The four of us were having a gourmet getaway/race weekend as Cruikshank hooked us up with sweet accommodations for cheap at the Fairmont Vancouver Airport. The hotel was fantastic, maybe a bit out of the way which we had fun bugging Sean about, but worth it at the end of the weekend. Some luxury digs and wonderful meals really put the cherry on top of a very fun weekend of racing.

Both Mike and Sean are not strangers to racing, having been mountain bike pros in the 90s (Mike actually raced with me on the Rocky Mountain Factory team back in the day – I have a yellow poster to prove it J) but the triathlon thing is relatively new to both of them. Both of them are cyclists morphing to triathletes with Palmer swimming more and Sean a more natural runner. It is going to come down to the bike in Maui and who is more motivated to see who wins the private battle between the two of them. Palmer thus far is definitely winning the prize of dedication as he stomped on the weekend and took the title in Campbell River but Sean was under the weather this weekend (too much bad influence in the form of a red liquid courtesy of Melanie) so it will be a double or nothing, winner take all war in Maui. However, of everyone, Ross gets the “most improved” award. His commitment to his Tahoe relay team is outstanding and during the preride on Friday his stealth accelerations were dropping the whole lot of us. He is on fire! AND, his team might need a runner in Tahoe… if you are very fast and looking to team up with Team “DianaRoss” we may have room for you…

Okay as for the race…. With main Canadian superstar sister Danelle Kabush getting ready to pop out a child, the elite female field in Vancouver was a less experienced group. I focused my race on the men’s age group field as Cal Zaryski is always a good partner of battle in this race> So is Mike Champigny but he is frankly just stomping right now so no longer is racing with this particular girl J. Both of those guys beat me soundly but Cal and I had a good race going up until the run.

I arrived to the race site fashionably late so I ended up doing absolutely zero warmup. Nada. It was my fault we were late, I needed the extra Starbucks given the race started at the crack of dawn in XTERRA terms: 8:45am!! I would never make it in Ironman. We rolled up to the start, set up transition, threw on the suits (Sean and I looked the coolest in our Profile by Aquaman suits – he borrowed Ross’s suit so we bugged him about his resemblance to the breakfast sausage we had the day before) and headed down to the water. I started next to Kelly and Jordan which was a mistake given that they completely obliterated the rest of the field. Note to self: start on slightly faster, not ridiculously faster, feet. I ended up in a pack with Melissa Spooner, Andrew Sellars, Mike Champigny, Cal and my good buddy Sean Cunningham from Victoria. On the second lap I pulled to the front thinking I would try to pick it up in the last 400m but then my cap came off completely and I couldn’t see a thing so Andrew and I swam in together casually and headed to T1. I am still consistently much faster than even May in a wetsuit as Andrew beat me by almost a minute earlier in the year and I have been out with him now twice. Still great.. and I was the first chick out of the drink.

A quick change to biker-Mel and it was up the first of many short but intense climbs that characterize the Vancouver course. It is amazing to me how beautiful and fun the trails in there are! It was SO rough this year, much like Maui was last year after heavy rain. Heavy precipitation had washed a lot of the dirt off the trails exposing large loose rocks, again, much like Maui. The ascents were as tough as last year in the wet conditions and the downhills were arguably worse. I kept thinking during the preride and the race of how lucky we were to have a chance to ride that race before Maui. Perfect preparation!

Cal and I rode together on the bike. He was more powerful than me on the flats and on the road but I was spinning up the hills well so we swapped the lead back and forth until we got to transition. I actually transitioned faster than him and headed up the climb first but he was absolutely charging. He absolutely blew me away up the first climb and even though I had planned to stay with him he was too fast. I finished the race with some “hard tempo” because I had no reason to really kill it other than for training. It was fun to cheer and encourage people in either direction and I got totally outsprinted by a half distance racer for the finish, which I was okay with. Here is a photo of me and the lady in green who took me out (she was finishing the half distance race): 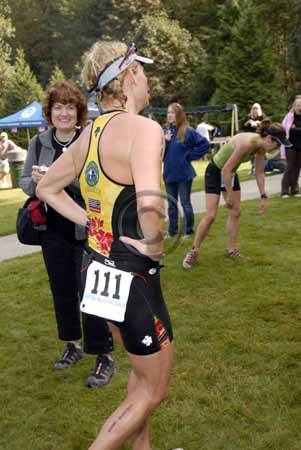 I took this photo off www.Toddsphotos.ca hence the copyright.

Ann Yew took second in the women’s race and Kathy Mackay rounded out the podium. Both of them will be competing in Maui! Kelly Guest ran away from Mike Vine on the run to win his first national title with Luke Way powering in for third man. Solid performance! The top two amateurs kicked butt with Mike Champigny fourth overall, Cal Zaryski in fifth and my university buddy Andrew Sellers breathing down my neck in third overall for amateurs. Absolutely stunning races by all of the top athletes in the field… I really believe all of the athletes I have mentioned really have found a new level this season so I am excited to see how everyone does at the World Championships.

In all, I went five minutes faster than last year, which is great given there was no pressure and the post race heart rate recap indicated there was considerably more in the tank. Kelly and I both went faster but I really think it is because we are so much stronger than last year. Sean, Palmer and I have been training with Kelly so we know he is absolutely stomping on the mountain bike right now…which is why his time was also a lot faster than last year. I am so happy with how things are progressing leading up to Maui. Obviously the foot thing is going to be an interesting sidenote on the season as I get back on track.

Also of note is the fact that every year I have won Maui I have raced in Vancouver and won.

The day after the race I went with the very fast boys of Victoria (Sneddon, Scotty, Virgil, Simon, Johnny, Cruikshank, Palmer, and now ROSS!) did a ripping fast mountain bike ride. I worked so hard and stayed closer and longer than I ever have. This ride is like a race where there is only periodic mercy so that you can see where the route goes. My singletracking is really getting strong right now and I am super stoked with my climbing. Of course, I blew in about 1h 45 mins because I did do a race the day before but it was a record amount of time spent in the Sunday ripper!

I can’t believe the season is almost done! The sea level power training has been successful and now I am on my way to Tahoe to finish the preparation for the US Championships. I have a slightly different plan this season as I felt a bit flat on the run last year. I hope to build on the fitness I have right now keeping in mind all the training I do now will be in the bank in Hawaii. I may be sorta screwed for the series but I can still win some races. That will be motivation for sure!