The XTERRA USA Championships tour kicked off this past weekend in Lake Las Vegas, Nevada.  A star studded cast of XTERRA pro athletes and a big contingent of new and returning age group overall championship hopefuls toed the line at Lake Las Vegas to compete in the opening round at 8:30am Sunday morning.  After the considerable amount of dust settled, Shonny Vanlandingham showed that she is in superior fighting form as I settled for second place before Lesley Paterson, Christine Jeffrey and Marie Gerspacher filled out the podium.  Notable were the three CANADIANs on the podium (me, Christine and Marie) so when Danelle comes back maybe we can continue the takeover!  Similar to last year at this same event, I found my form a little soft for our first race of the season – only this time I couldn’t hold Shonny off on the run.  Instead,  I ended up running in on fumes after a heat induced detonation.  The podium was a star studded cast, so I can certainly be happy with a runner up position on the day and congrats to Shonny for having a really great race!  I decided in Hawaii last year to gear training towards the fitness requirements and schedule dictated by the Maui World Championships at the end of October and without the best form possible, the top rung of the podium is out of reach.  Although I am happy with my progress so far I can’t really be satisfied with that with any hopes of winning the series! 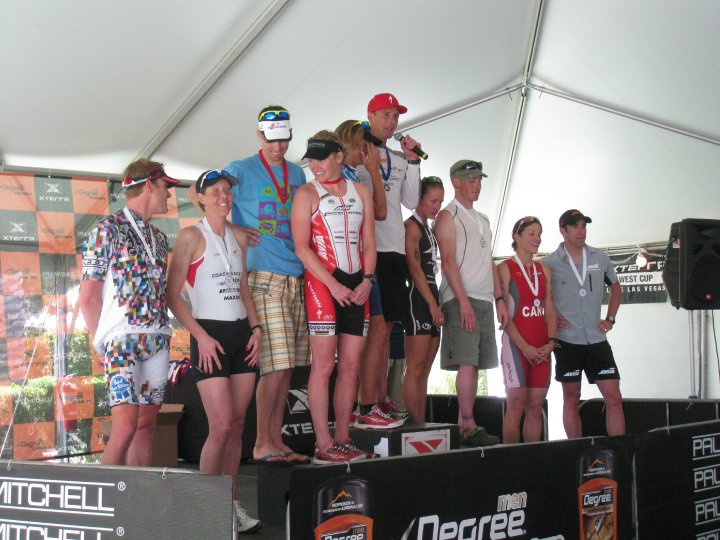 With just a warm up at Sea Otter to count as racing thus far this season, I have delayed higher end training by at least a month in order to not have the trouble I had in Hawaii last year .   I could definitely feel that on race day.  The race was incredibly difficult for me to find the speed I needed for the flat power sections and although my running is much better than it has ever been, I was absolutely gutted by the bike effort and had nothing in the tank to battle the hot, hilly conditions on the run.    There were a few fun, sketchy downhills  that my new Specialized Era with the new kickass shock platform absolutely destroyed but unfortunately they lasted all of four seconds to descend so there was NO recovery anywhere on the course.  I could tell I was already fading by the second lap (the bike only took 1h 21 for me so that is not acceptable) so it wasn’t a huge shock when Shonny caught me.  I also found I was a bit slow in the corners and technical stuff so probably my race skills are a little rusty as well because I wasn’t really tearing it up out there.   Kind of rusty and definitely work to be done.  My sentiments were reflected by some other athletes in the field who found the race not to their liking, including Renata who just shrugged it off as “not her course” which I believe given her outstanding form to start the season.  Another performance worth noting, although not recorded in the media, was my team mate Sara Tarkington, who managed to fall on this slippery water pipe we needed to cross in the dried riverbed midway through the first lap, damaging her wrist in the process.   At this point we aren’t sure if it is broken or just heinously sprained but it was useless to say the least and she still managed to finish the race (a whole second lap of gnarly downhill on it, I might add) before running herself to 8th place just behind teammate Emma.  Gutsy, brave performance that deserves a mention.  Nice highlight for the MelRad Racing team’s awesome athletes!

The  best part of the weekend was having the opportunity to get the entire 2010 MelRad Racing squad together to give away team goodies, hang out and meet some of our sponsors including Dan from Nathan, Gary from ESI grips and Shawn from AVIA.  The team recieved gloves, clothing and wetsuits from Profile Design, helmets from Lazer, nut butter from Justin’s, lube from Squirt, grips from ESI, packs, bags and multisport laces from Nathan and a few other goodies to add to the Specialized bikes, Sundog Eyewear, Pactimo gear, Powertap training tools, GU beverages and energy packs, USANA vitamins and Genuine Innovations flat tire relief they already were expecting.  Some product knowledge was handed out along with much appreciated hydration packs (pretty useful for this particular race).   Fred Smith managed to finish 5th overall amateur, an effort that netted him fourth in his age group given they all managed to beat a large portion of the pro men’s field!  Incredible job!  Our big “W” of the weekend went to Tim Holland, who won the men’s 25-29 age category and Meiling and Jo had podiums on the women’s side!  A complete recap of the MelRad Racing team’s results and weekend will be available at www.melrad.com. 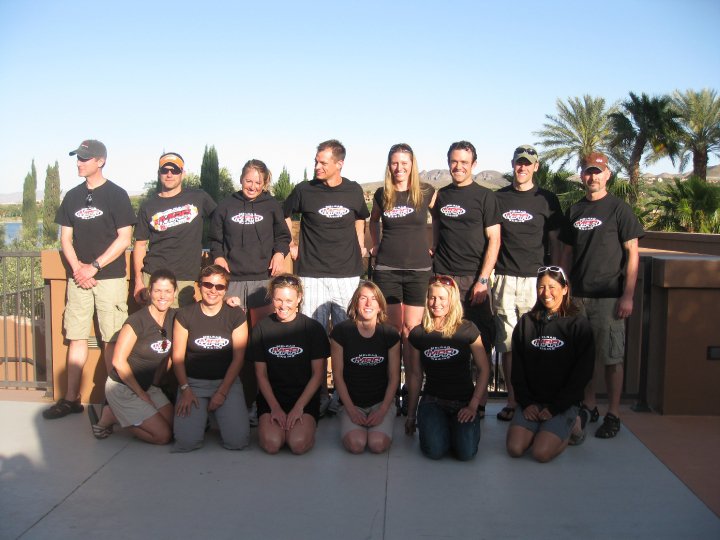 I wasn’t sure if I really would want to race Wildflower after this race but now all doubt has been erased from my mind.  Nothing can replace some solid racing to find the fitness needed to win these races so Wildflower will fit the bill perfectly.  I am sure the half Ironman girls are going to punish me mercilessly which will be just what the fitness doctor ordered.  Totally looking forward to the carnival that is Wildflower, along with the topless water girls, the rock bands, the crazy partiers, the campground and the hilly run.  Should be good times.
Thanks very much to all the amazing supporters of me and my team.  Thanks to Conrad for a fun time in the XTERRA University clinic… I think we are a good comedy act!  Thanks to my 2010 coaching ‘staff’:  Jon, Houshang and Ron.. not a shabby start to what I am sure is going to be a memorable year.  Only five days till the next hitout.  Until then, keep it rubber side down!