I guess the reason that this blog might be interesting to anyone (hi mom!) is watching the progression from off season training to race season form and how that translates to results.  Having a blog means anyone can follow along and see whether what I did then gave the outcome I was looking for.  So in the spirit of creating a history of cause and effect, I will again give a few boring details of the last week or so of training.

More interesting though, will be my new blog entrant: the farm!  I was so excited last year when I planted everything entirely too late to enjoy bushy green tomato plants in September (of course, only green tomatoes as well) that I have been inspired to actually start this farm when I am supposed to:  now.  I have planted watermelons, four varieties of tomatoes, peppers, calendula, african daisy, two varieties of beets, arugula, spinach, rainbow chard, broccoflower and four varieties of basil.  I plan to grow ALL of this on my porch.  In addition I have a pot of strawberries along with two blueberry and two raspberry bushes I have planted in the backyard to test whether deer are interested in them at all.  I do live in a city, mind you, but I live across from a park and a lot of green space so we have LOADS of large deer roaming around eating TULIPS this time of year.  Mine have escaped capture thus far but I am sure I will not have any flowers upon my return from Monterey this weekend.

Read more to see photos of the “farm” in its infancy and to read what the triathlon nerd in me has accomplished….

After returning from California I took it easy through the weekend with a couple longer mountain bike rides to learn how to ride the Era in gnarly terrain (2x 3.5 hours) and did a long run at Elk Lake that was horrible and painful and required too long to recover from.
Starting with Monday of last week I began a serious body maintenance campaign because too long in the car followed by hard (but not supposed to be that hard) training meant my lower back was way too sore.

I got massage on Monday and did an easy swim.  Tuesday we did a moderate swim with a bunch of band only pull and I followed that by 2 sets of 4×4 minutes with 1 minute rest on the trainer at a VERY difficult wattage (90% of MAP).  It was my best set ever so obviously I am still performing fine but my back was sore so I called up Paul the wonder physiotherapist and he saw me pretty much at night (7:45pm.. you are a star Paul!!) and fixed the damage.  Wednesday I did another moderate swim of 4.5 km where I was totally drowning followed by a 2.5h mountain bike ride at SOLID pace with Ross (we were railing the trails.. probably dropped 15 minute off what that loop should have taken) and I did 3x6mins run off the bike which was very average.  To console myself.. I started the farm. 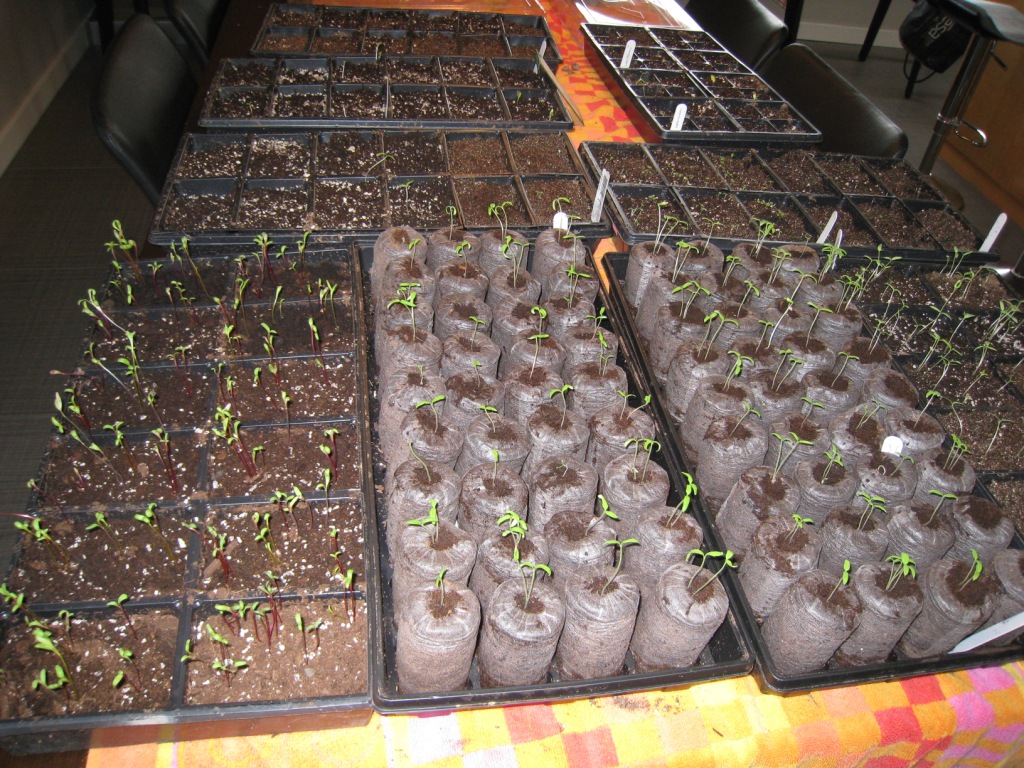 Thursday I was given a mandatory day off from Ross.  I was allowed to swim alone but other than that I was only allowed to sit on my butt or lie down or stretch or do taxes.  After Thursday I had planned a solid ride with Ross and Palmer where they would submit themselves to pursuit laps on my Hour of Power loop.  Basically I gave them 3 minutes head start and then chased.  On the first lap I went a 9:05 and they were nowhere in sight.  Second lap was 9:08 and I saw them.  At the top of the lap I caught Ross and Palmer speeded up to act as my rabbit to make it a 9:03.  On the last lap I was trying SO hard to catch Palmer that I screwed up a few sections in the single track and it cost me… 9:10.  So a 36:26 which is my best recorded time ever so I will take it.  Rode the trails home and went for coffee.  Lunch, rest with legs up and then treadmill workout.  Short warmup of 10 minutes then 3 sets of 3 minutes at solid 10km pace, 2 rest then 2x 1 minute at way faster than 10km pace with 1 rest.  Best set on my Woodway ever and I didn’t even feel sore.  I like it.  Saturday I did the Burnside group ride which wasn’t as hard as it can be but was still very brisk in sections which ended up perfect for me.  Some legspeed without blowing up my legs (which at that point could feel the Woodway experience).

Easter Sunday Ross woke up to find the Easter bunny had hidden a cache of Easter eggs and jelly beans around the house.  He celebrated by donning the chicken slippers and making short work of two piles of eggs before losing interest and instead reading the paper and drinking a coffee.  We still need a child to come to our house and clean up this mess of candy I have strewn all over the place.  I also would like to stop eating jelly beans so please someone donate your child! 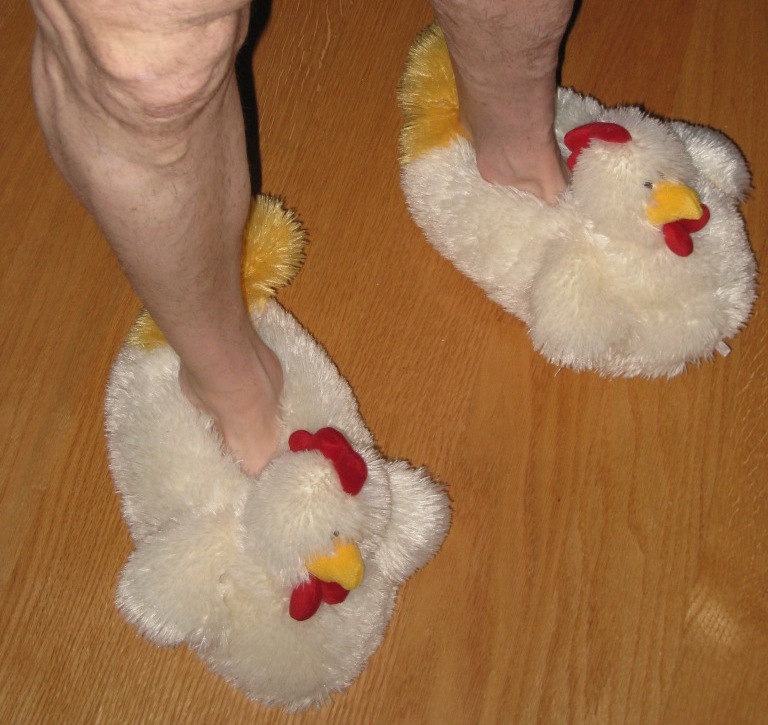 After the anticlimactic egg hunt I met Kerry at Elk Lake to do my favorite long run workout.  Three km warm up, a 5km steady state, a 5km solid base, another 5km steady state followed by a 2.5-3km warm down.  It was pouring rain that morning so the trails were a mess so we ran pretty fast for jumping puddles and dodging sinkholes.  I think we were both happy with our runs with each five km repeat under 20 minutes with neither of us going over the prescribed effort.  Last week I did that run and my second 5 km was positive split by 90 seconds so keeping both within a 2 second deviation was a strong effort without overdoing it.  I am going to be interested in what I can run a 10km in when I do the TC 10km race in two weeks.  I finished the day with an hour of cadence drills on the rollers and went to Ross’s mom’s house for Easter dinner.  21 hours of training with two days off.  Logged.

So today I had lots of massage, physio and downtime which actually made my back sore (too much prodding) but my legs feel good.  I hope I have some gas for the weekend as I am leaving for Sea Otter on Wednesday.

Today was bad news for the farm. Ice balls fell from the sky.  I hope it is okay!  I will give you an update when I get back from California… until then…happy trails! 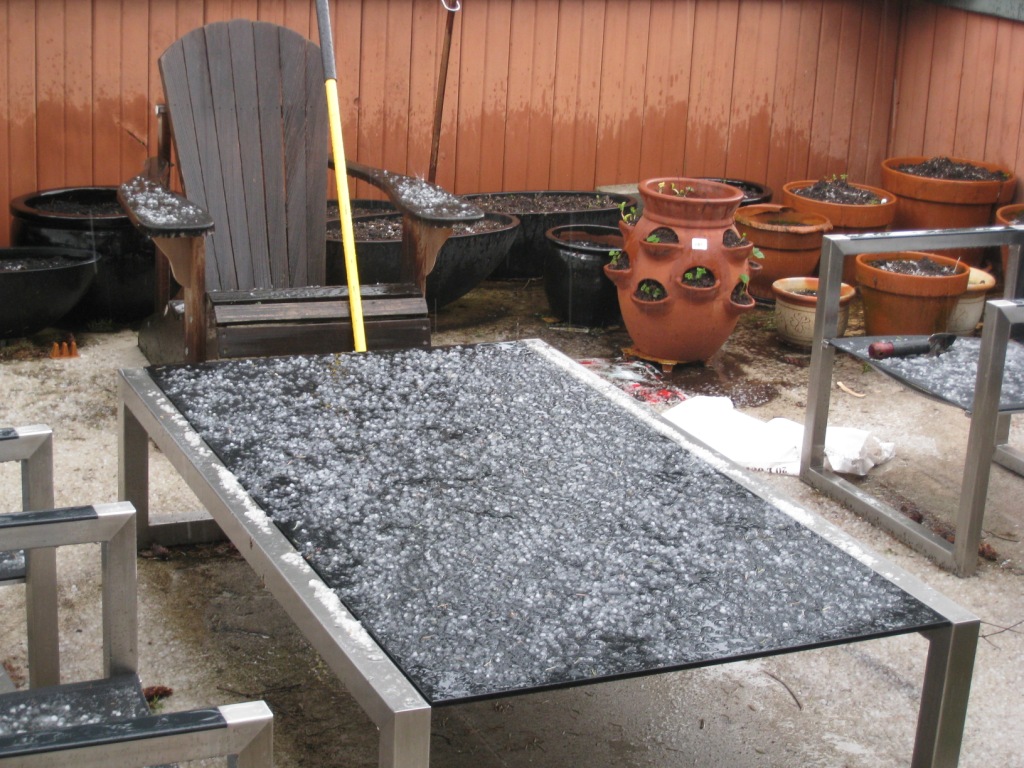 Hail on the farm…my strawberries better make it!!