Undefeated at the Canadian Nationals.  That is a good feeling!  This weekend I took home another title from the Sport Chek XTERRA Canada National Championships presented by the Nita Lake Lodge with a solid field of XTERRA veterans and national mountain bike stars that made the battle a lot of fun.  I am not going to lie, the course gave me a distinct advantage on both fronts:  the bike course designed by Trevor Hopkins was pretty technical for a triathlete and the run was absolutely diabolical for a mountain biker.  Cheers to that!  After leading the pro women out of the water and setting the fastest bike split I had the time to burn on the run on my way to the victory.  Brandy Heisterman was a bullet on the bike setting the second fastest bike time and great swim/run times to take second place in front of a fast running Danelle Kabush in third.  Mical Dyck had a super fast bike but Emma Garrard’s run time and finishing kick meant she ended up in a sprint finish with Emma snatching fourth place by 9 seconds at the line.  Great racing ladies!  Congrats to Josiah Middaugh for repeating as men’s winner and sad for Conrad to have to DNF.  Great job to Canadians Mike Vine and Kelly Guest for podium in 2nd and 5th respectively with Americans Seth Wealing and Branden Rakita taking 3rd and 4th.  Nice work boys!

Looking forward to TSN’s coverage of all the action!  Thanks to Tony Smith, Cal Zaryski and Yoeri Geerits for bringing the race back to Whistler! 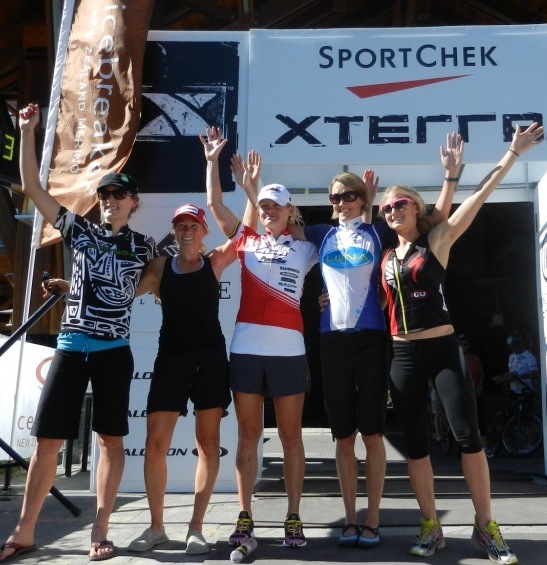 Of note was the outstanding 8th overall (including pros) place for Kate Button of MelRad Racing.  Not only has she won her age group every race she has entered this year but this 26 year old phenom who has only been riding 2 years took the overall age group title as well.  Fred Smith of MelRad Racing also won his age group and took a solid 3rd overall age group finish.  MelRad athletes Lance Thatcher, Jo Markham and Alexia Droz all finished top 10 as well so MelRad Racing was certainly top team in attendance.    So, so proud of all of you! 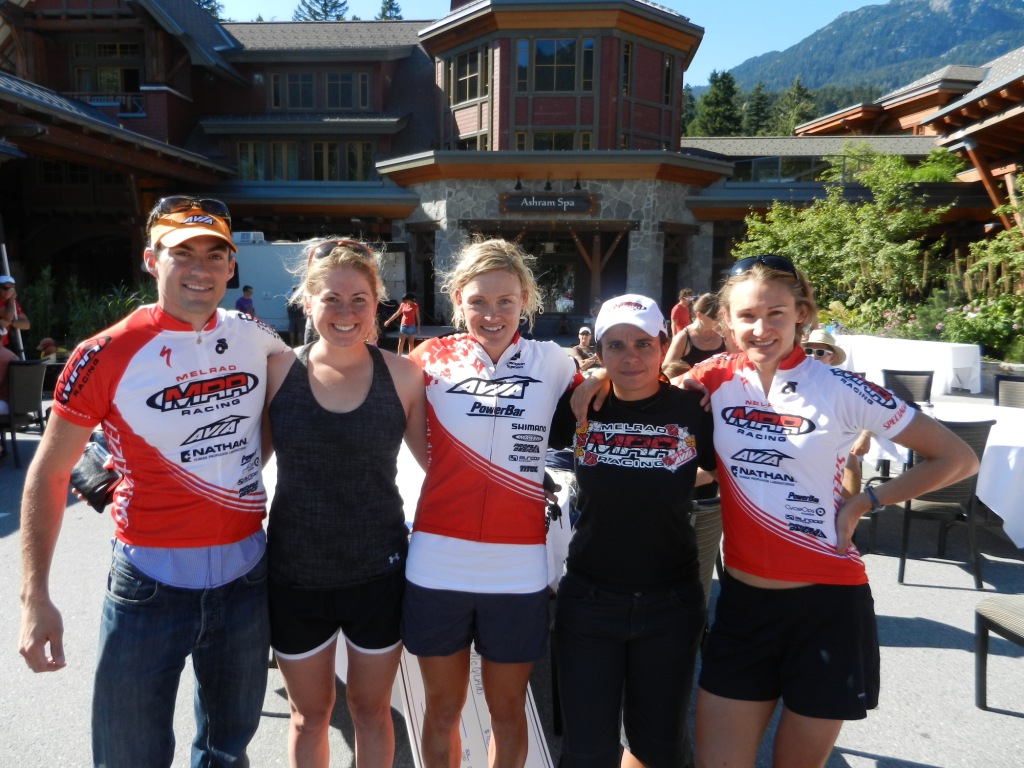 Fred, Jo, Mel, Alexia and Kate kickin it in Whistler – how awesome are those Champion System race kits huh???

My weekend was top notch.  Having an incredible room at the Nita Lake Lodge and my friends with me to keep it light it was one of my best weekends in Whistler, ever!  The staff was so friendly and remembered me from last year which was pretty special.  Conrad and I were spoiled.  The people in Whistler LOVE athletes because they pretty much all ARE athletes of some sort.  Nita Lake Lodge was so accommodating!

I only had one loop of practice on the bike course (two times through the very last section) as I wanted to focus my energy on Vegas to the last minute and come in late.   Perfect weather meant that was a great strategy and I finished the hard work for Vegas by Wednesday.  Had it been wet it would have been another story as wet roots and bridges are far more technical to ride. Lucky for all of us.

9am race morning the gun went off.  The swim was in Alta Lake and a warm day, smooth as glass water and windless morning meant we had a clean start and perfect conditions.  I found myself in a group of men including Andrew Sellars my university buddy who used to do 6am runs with me (he was a triathlete then and I was just an overexerciser).  That group was going the exact right pace so I pretty much had the easiest swim ever in history.  No stress, no fuss and out on Josiah and Mike Vine’s heels which shows my Profile Wahoo wetsuit is working and I am right where I like to be in a wetsuit swim.

Out onto the bike we were treated to a lot of fun sections.  I can’t remember all the names but Emerald Forest, Get Over It, Barts Descent and finally River Runs Through It.  So, so much fun on the Specialized 29er Epic!!  My first lap was a little rough when my rear seatpost bottle cage decided to break.  It was falling and twisting all over the place and when it went sideways I couldn’t really pedal.  I was distracted and out of sorts my first time through River Runs and it was really dark in there so more than once I think I got lost and almost turned around.  I think the Sundog glasses I chose were a bit too dark.   It was not my best run through there although I rode all the stunts without a problem I actually just struggled to keep momentum through the rooty stuff.  I was caught by Cal and Luke in there and they instantly dropped me.  Out onto the second climb I almost pulled Cal back completely but he would make time on descents that I would almost get back on the climbing to have him get away again in the technical.  Cal is really riding well so I was stoked to make time on him on the uphills.  The cage broke off completely on the second lap and it was half relief because the distraction was gone but I ended up racing a 3 hour race with one bottle of Powerbar Perform and six Powergels.  Yikes.  Not ideal but it worked. 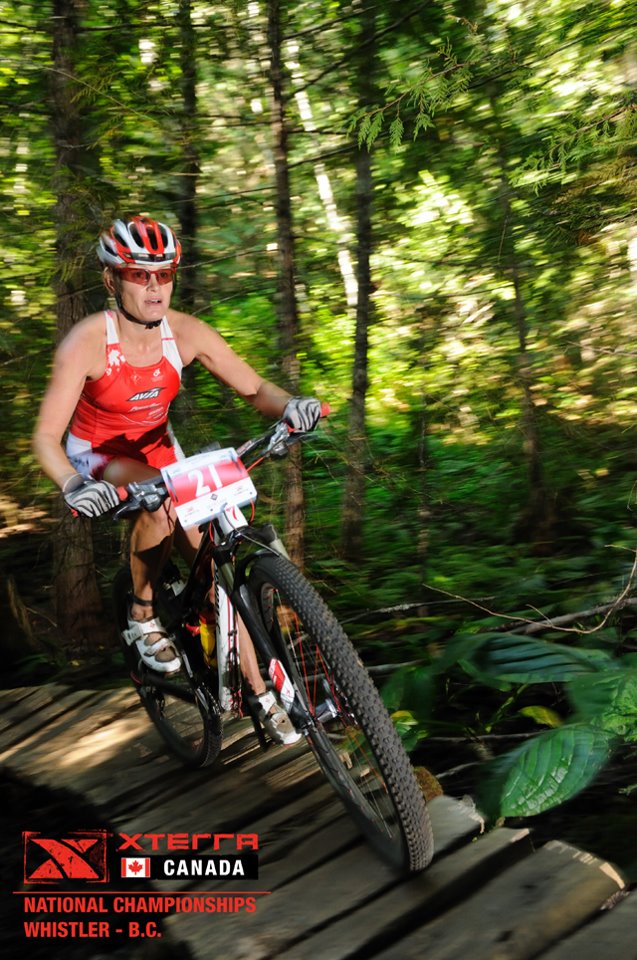 Cool features on the course…

When I headed out on the run I was told I had 6 minutes on second.  I have been running well and my legs were great so I was very confident for this run.  I took my time in transition to put socks on (no blisters for Worlds!) and focused on feeling good.  I ran strong and steady on the uphills and took my time on all of the descents.  We ran up Danimal and down Hwy 99 which featured some large cliff drops and a million gnarly roots so the chance of lower leg injury was WAY too high for me to run fast downhill with a World Championship in 7 days.   It wasn’t really anything like 21km on the road but it was a lot of fun…. I just didn’t want to make a mistake and I didn’t.

I had two of my best girls in attendance so after the awards we were poolside in Blackcomb and a guests of a friend of Tammy’s who sent a little welcome and we enjoyed the “Gold” level of the hotel.  Swanky.  Our room at the Chateau had a very nice message and a little post race recharger of Vitamin Water and energy bars… both of which were appreciated but relegated to second priority since our evening plan was to hit the Bearfoot Bistro to partake in some sabrage – opening a bottle of champagne with a sabre. 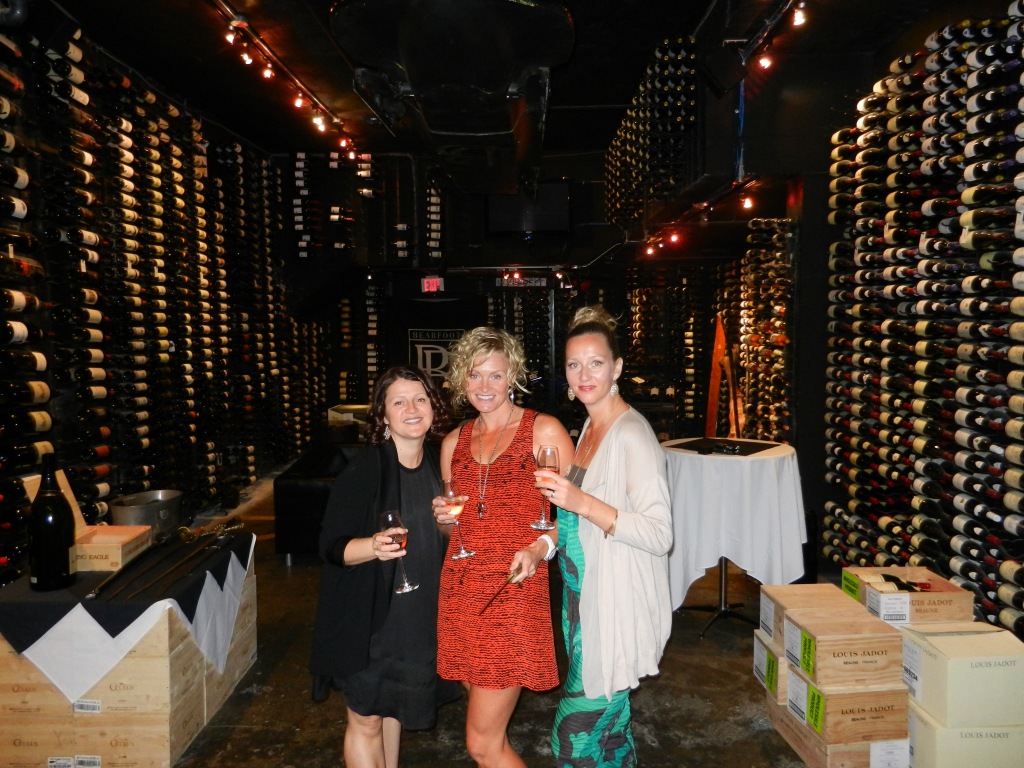 Tam, Mel and Maia.  Thanks for the fun weekend ladies! xx

This technique became popular in France when the army of Napolean visited many of the aristocratic domains. It was just after the French Revolution and the saber was the weapon of choice of Napoleon’s fearsome light cavalry (the Hussars). Napoleon’s spectacular victories across all Europe gave them plenty of reason to celebrate. During these parties the cavalry would open the champagne with their sabers. Napoleon, known to have said, “Champagne! In victory one deserves it; in defeat one needs it.” may have encouraged this.. 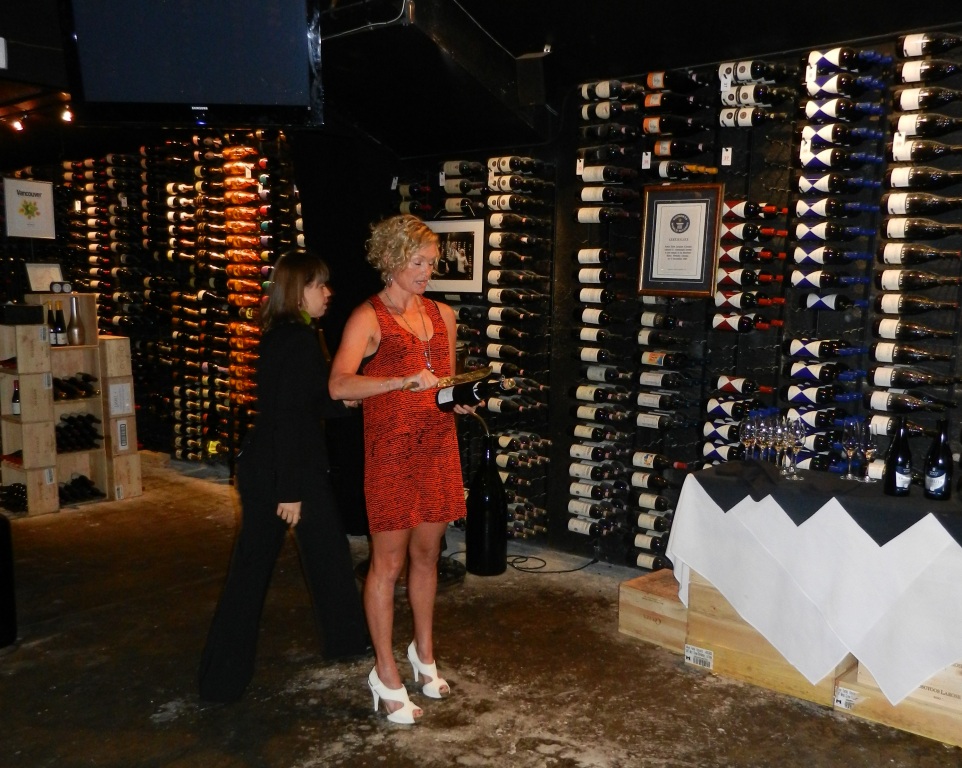 It was also considered a harbinger of good luck to have the bottle break cleanly.  Happily, I have a good luck charm to take with me to the upcoming World Championships in Vegas and Maui as I successfully chopped the end of that incredible bottle of pink bubbly which me and my besties drank with the most insane meal I have ever eaten in my life.  At one point Tammy claimed to be angry because the food was so good she didn’t want it to end.  Pretty incredible especially the ice cream made with liquid nitrogen which closed the evening.

Our waiter used to race with Sam Gardner back in the old country… small world!!   Again, some overkill love for this victory but much appreciated nonetheless!

So after enjoying some success it is now time to work towards some bigger success.  I am in shape.. now it is time to put some good stuff together on race day. 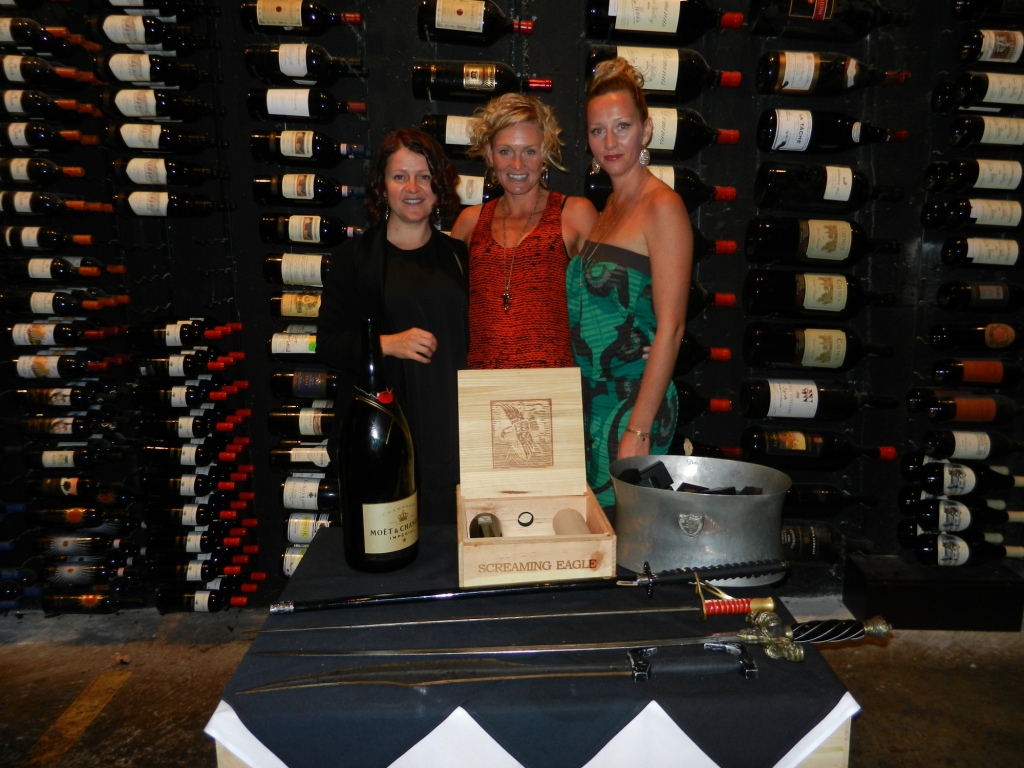 Hot chicks, big swords and Screaming Eagle (the wine in this cellar was insane)

Vegas 70.3 World Champs next week with an absolutely star studded cast of competitors.  I am so excited to be a part of it.. the challenge is going to be the experience of a lifetime.  Bring it, eh? 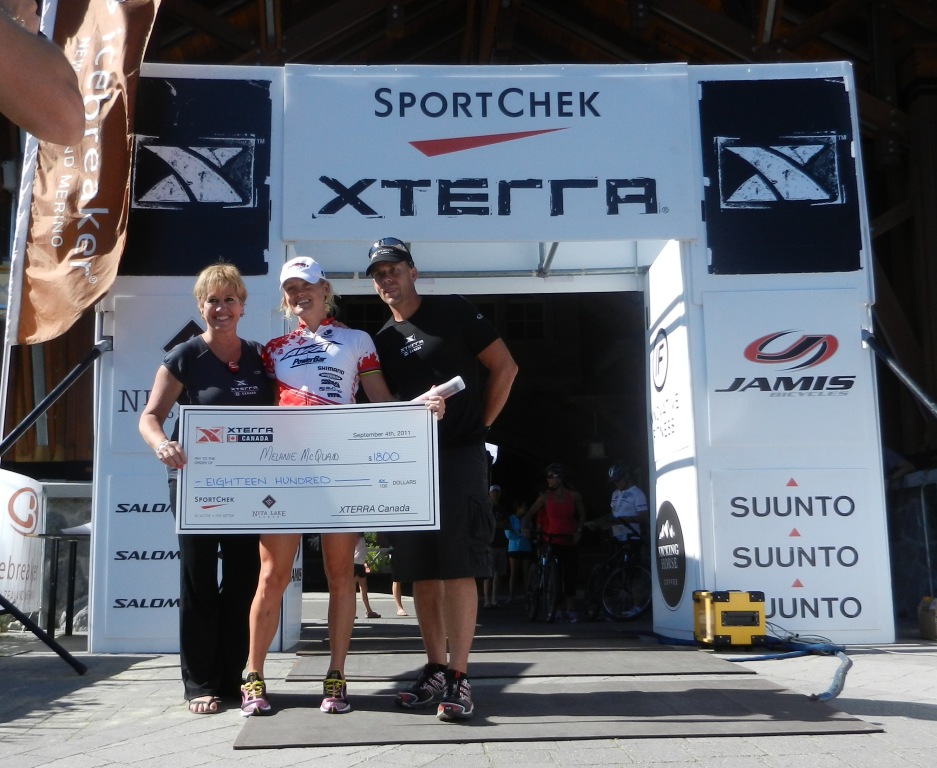 Thank you XTERRA Canada and Sport Chek and TSN for the support!

Thanks to Specialized, Nathan, AVIA, Champion System, Powerbar, Sundog Eyewear, Maxxis, Shimano, CycleOps, Profile Design, Titec, Genuine Innovations, Usana, Saltstick, and ESI Grips.  Also a big thank you to the MelRad Racing team especially Dee Thatcher for really bringing the team together.  The team is kicking some serious ass and their success inspires me so much.. way to GO GUYS!!!  CANADA UP!

Big thanks to my superfans Emily and Morgan for cheering loudly for me! Pretty awesome to see their mom kick some butt out there on course. See ya in Maui!! 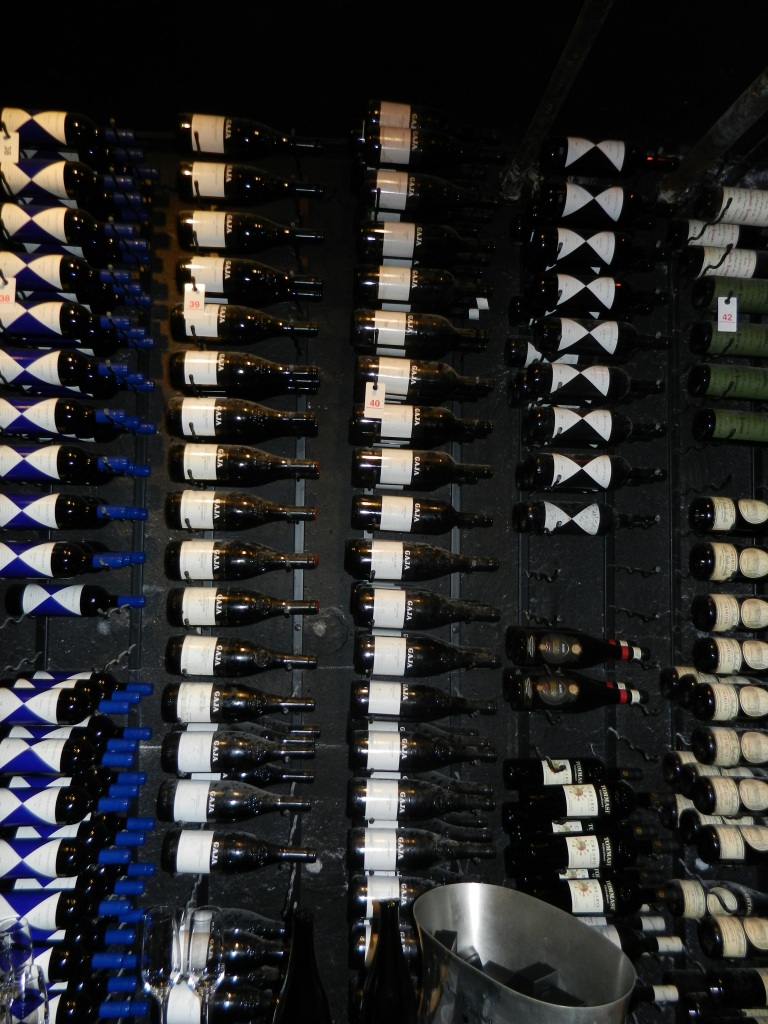 More scenes from the cellar.. this is the Gaja section? xoxoxx  There was also a large Masseto by Ornellaia selection but since I have never had any… Gaja is still my top rated 😉