Tomorrow is a mystery, yesterday is history and today is a gift.  That is why it is called the present.

In order to perform well at altitude, I need a solid block of acclimation and training at altitude.  Although I have a solid grip on the series going into the final with a perfect score of 500 to Shonny’s next best 462, I believe that Nationals and Worlds are a showcase to the sport and deserve a very high priority.  It is go-time, the point in the season where Ross and I are both on the same page:  get Mel going fast.  This year was a bit different since I skipped the early season altitude prep along with the Beaver Creek event to rest and repair an injury.  Then I did a block of base training leading up to a 70.3 event in Lake Stevens, where I was pleased to earn a fourth place among very fast pros, a Clearwater spot (not going), prize money and some confidence that my fitness is going in the right direction and my injury had cleared.

So after an easy week to recover and prepare to leave (see my last post) I did one last hard road ride with the Wheelers to blow that last bit of crap out of my legs from a rest week (where my seatpost dropped and INCH since I didn’t tighten it enough, explaining why I was suffering so bad in the last hour of a 3h ride of 108km – very solid pace for hilly Victoria). This becomes relevant to this post soon.  Sunday morning Ross and I hit the road on our Epic Mountain Bike Ride Adventure on our way to Vail, Colorado.

Now I must clarify what “epic” meant on this trip.  First off, I went through the IMBA (www.imba.com) list of epic rides and cross referenced them with the route we were taking from Victoria to Vail.  If a ride looked appealing and was in an area that was reasonable given our routing, it was on our list.  I added to our list some of the rides I had found in the past that we liked and we would nominate to the IMBA list as well, or you can just try them sometime if you are in the area.  Of course we rode without a GPS, a map, enough food, or a clue which made the rides ten times more epic than necessary.  Not advised.. maybe at least find a map before you do what we did.

So without further ado… onto our list.  We did Kachess Ridge in Washington, Twin Lakes Loop in Oregon, Mid Mountain Trail in Park City, the Mormon Tr/Great Western Trail/Jeremy Ranch Loop outside Park City, Three Suds Park City, and the Commando Trail in Vail.  There are other rides but those are the biggies so read more for pictures and stories…

Kachess Ridge is just East of Snoqualmie Pass.  We parked at Lake Easton so our Subaru full of stuff would be around people and rode to the trail.  It was a terrible, terrible day on the bike for me.  For whatever reason, my legs did not work.  Whether it was the road ride the day before (which would not even make sense for what was going on) or the fact I jumped back on my Era without checking the seat height/position (much more significant) I SUCKED.  Poor Ross had to wait for me and although I was climbing with a heart rate of 110 (which is ridiculous.. 140 is barely moving) I couldn’t do anything.   So after a very lengthy climb, we got to the saddle in the mountain and started the amazing hour of descending through meadows, down drops, roots, rocks, switchbacks and fun, fun singletrack.  Ross got a video of him pouring some water on his disk after the descent where it evaporated from the steam.  Crazy.  Epic.  Fun. 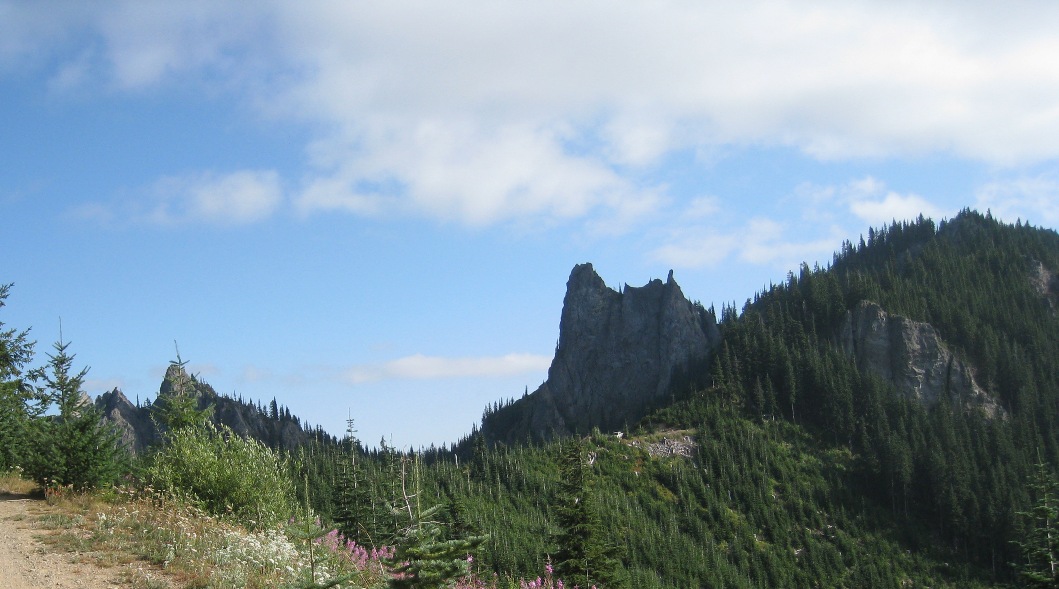 Approaching the top, we go around that rock outcropping

The singletrack winds its way through trees and through meadows

After I jumped in Lake Easton for a quick dip (Ross chose to stay dirty) we drove to Baker City, Oregon.  It is a town I have never noticed before.  However, 20 miles out of town at the end of a dirt forest road are more forest roads and a super fun singletrack called the Twin Lakes Trail.  Unfortunately, it is a bit confusing to find that trail so we ended up riding the loop in REVERSE.  Crappy.  It was still awesome, epic singletrack but I am sure it would have made more sense to ride it down vs up.  Also, because we were riding it backwards our directions made no sense to us at all.  Until we got to the summit and realized our mistake.  Still, this ride was insane!  The views, the wilderness, the exposure – I was frightened and exhilarated all at once.  My advice is to try to ride up the road past the lime quarry first, it would be better but I still would not ride down that talus slope that we walked up.  I am scared of heights so that was not my friend but regardless, up or down, it would be super scary.

After Baker City we went to Park City, Utah.  We got a crazy deal on the Waldorf Astoria Dakota Mountain Lodge and checked into our one bedroom suite that we had for four days.  So plush! 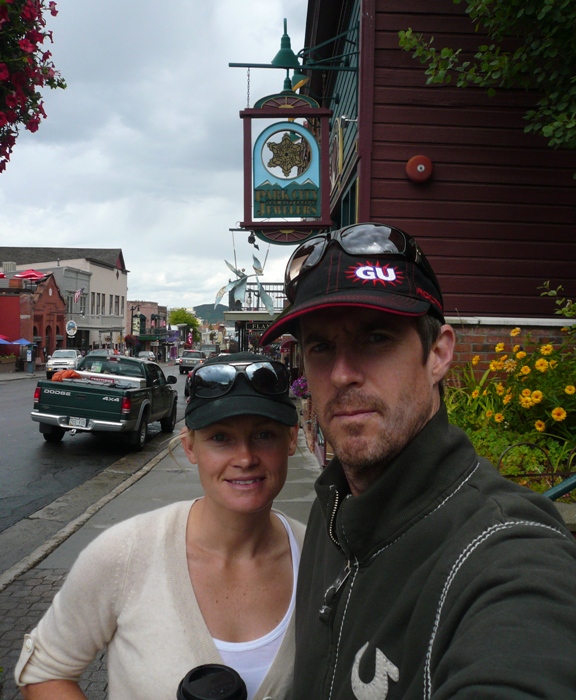 Our first ride in Park City was actually a small ride on the Lost Prospector loop.  I took a day to be a triathlete and ran the Farm Trail and swam at the Recreation Center.  Then Ross and I did a cruisy evening ride on the Lost Prospector loop.  After our chill day we were ready to go ride the Mid Mountain Trail.  One word:  awesome!  This trail starts up in Park City by Deer Valley and meanders along the mountain at about 8,000 feet for about 20 miles of fun.  At about half way we got to a lookout where we could see down to our hotel in the Canyons and thought the ride was close to ending but no.  We had an hour and a half of fun singletrack cutting through the woods and along ridges back to the hotel.  Well worth it!

Then we did a truly epic ride up the Mormon Trail (which was the original pioneer trail and pony express route!) to the Great Western Trail.  That was a tough ride but incredible as we were travelling along the mountain ridge high above Park City and Salt Lake.  Lots of very steep climbs were included that were not Ross’s friends since he does NOT have a granny gear.  We then ripped down the Switchback Trail to Jeremy ranch to finish the just off three hour loop where I proceeded to go into trigeek mode and ran back to the gas station where we bought and consumed well-earned Cokes!

We had decided to extend our stay in Park City since it had good pools, good trails and our hotel was awesome.  Our last day we were going to go to Fruita instead of riding in Park City but the weather was horrible.  We weren’t into riding in 100+ degree temperatures.  Instead we attempted to ride the Three Suds Loop which was lame.  That part of the mountain was under construction so we go lost a million times and ended up riding an out and back which I was trying my hardest to avoid.  This caused some tension since I am anal about being lost but I guess the trails we did ride were fun.  Even if we had to ride the trails twice.

So after Park City we finished the journey to Vail, unpacked and went ski surfing.  Haha!  Ross was so excited for a day off the bike.  I went for another run easy before hopping in the boat but it was an awesome day of sort of summer vacation!

Sunday we went and rode the Meadow Mountain Trail to finish our first week of easy, long, epic riding.  The singletrack descent after that climb was unbelievable gorgeous and stupidly that was the only day we didn’t bring a camera.  Fun though.

That brings to a close my first week at altitude.  No intensity, no pressure, no workouts (other than some swim workouts that were very average) and all fun.

More of the same kind of fun continued the following week so stay tuned!