This week I have been down in Monterey for the Sea Otter Classic, a multi day all things cycling festival held at the Laguna Seca Raceway in Monterey California. I have done this race almost every year and it has had a few different iterations but really, it is mostly the same format. Gone is the time trial however, and the stage race format, so this year year I am only racing the short track and the cross country on Saturday and Sunday, respectively. I have been in California since Tuesday, however, so there have been a few things to do before the actual racing starts so read on for the week of pre race activity…. 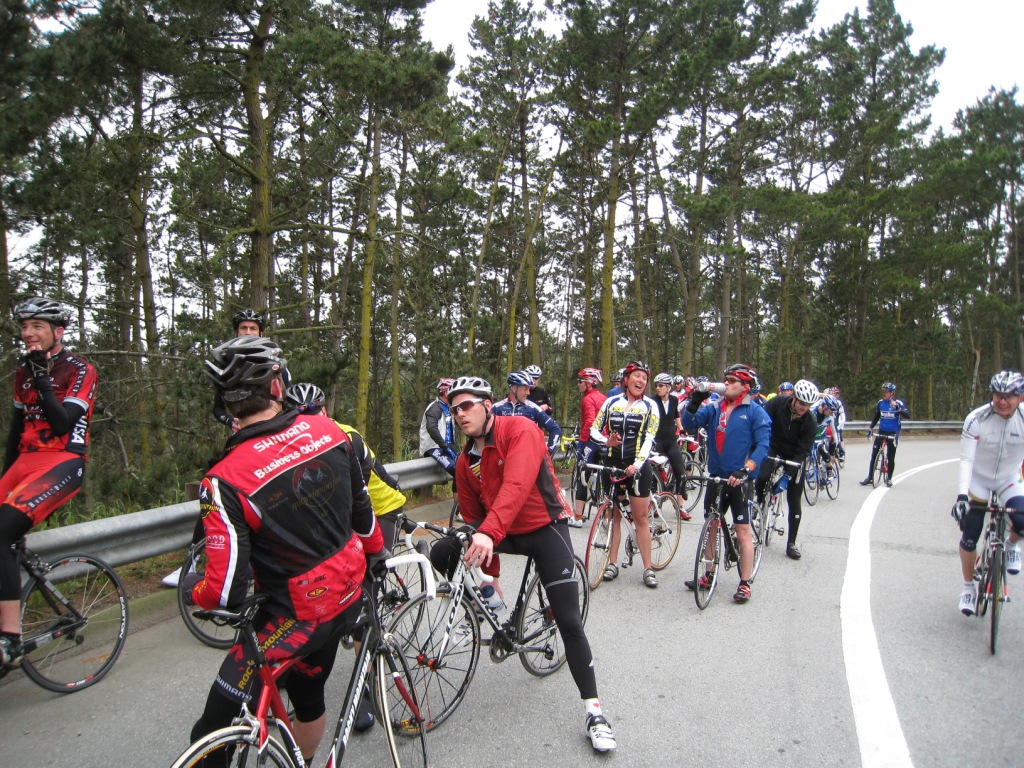 I arrived Tuesday night 25 minutes ahead of schedule. WHEN, I ask you, does that EVER happen? I could have hugged and kissed the pilots, the flight attendants, even the grumpy man behind me on the plane. A tail wind is a good thing for any mode of travel. So I got into our hotel fairly early and had time to do pilates, build my road bike, find a pool to swim in the next morning, arrange getting one of the cars for the morning from Scott and have a leisurely salad dinner in my room (I hate sitting in hotel restaurants alone so I got it “to go”) and hit the sack early.

6:30 am I was out of bed, insisting to the front desk person that there were keys waiting for me. She said the only keys were for McCoy. I said they must be mine, not really being sure, but certain I could return them to the “real” McCoy early enough that no harm would be done. Still I imagined a frantic businessman wondering where his rental car was and chuckled. Of course, when I got the envelope with the keys they were perfectly labeled for Melanie McQuaid. I don’t know why my name is so hard for so many front desk persons?

I swam at Burlingame Aquatic center and just cannot believe how nice it is to swim outside. I had a great set, knocking on the door of respectable swimming I tell ya! I did 16×100 on 1:30 (yards!) and held 1:11 for the first 10 and 1:10 for the last six going a 1:08 for the last one. The real swimmers out there are like, yeah whatever you still suck but the non swimmers can appreciate that I am pushing the 20 minute 1500 barrier here and that is pretty darn good for a former cyclist. I am really excited about this triathlon season! I am thinking I may soon shuck the “cyclist” label with some reasonably reasonable ability in other sports

. However… you will have to read the next instalment to know that the “cyclist” in me is no less than in the past!

We then went to Palo Alto Bicycles to get some air for the tires of my new BMC Promachine SLC01 because I was planning to ride from Palo Alto to Santa Cruz. Adam hooked me up with a new mini pump, some snacks and water and a trusty directions guide and I was off. The ride was unbelievable. I rode up Sand Hill Road to Old La Honda, which reminds me of goat paths in Europe or Finlayson Arm road in Victoria… cool twisty treed road that is really only one car wide. Unbelievable! I then rode straight into a gale force headwind to Hwy 84 to get to Hwy 1, turned left and headed south with another unbelievable tailwind. Ah! 40km/h at 100W. I motorpaced the next two hours or so in the wind and arrived to Santa Cruz in no time at all.

Thursday I went to the venue to ride my brand new 2009 BMC Team Elite 01 hardtail which Markus had presented to me the night before. The red and black paint scheme matches my outfit perfectly! Plus, the new improved lateral stiffness is incredible… the bike handles like a little light bmx. It is awesome. Greg from Speedway Bicycles in Alaska was joining us for the weekend since he won a trip from QBP at Frostbike to Sea Otter so he and I went and rode a lap together. It was sunny, beautiful and very, very sandy out there. Many large sections of beach. Good times though.

Friday I did the industry ride put on by Bicycling magazine. A pile of cyclists headed out to ride 17 Mile Drive which is awesome and spectacular. And on that particular day, very cold! We are in California and it is colder than when I was at home. The highlight of the ride is the cyprus trees I think. They are quite lovely. After the ride we had a coffee at Peets and headed up to the venue where I picked up a car to head to the pool to get some water time in. Done and done… time for dinner and bed. 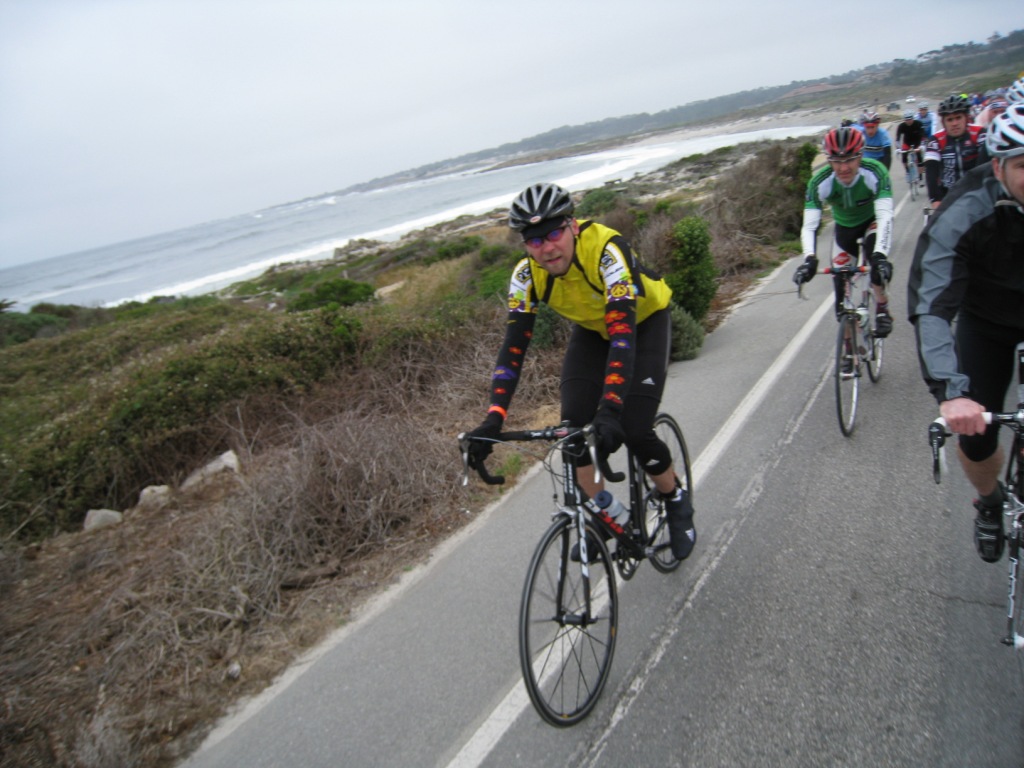 Christopher Zigmont from Pedros on the Bicycling industry ride

So Saturday was the first day of racing and…. that is our next story. But I will leave ya with a little teaser: 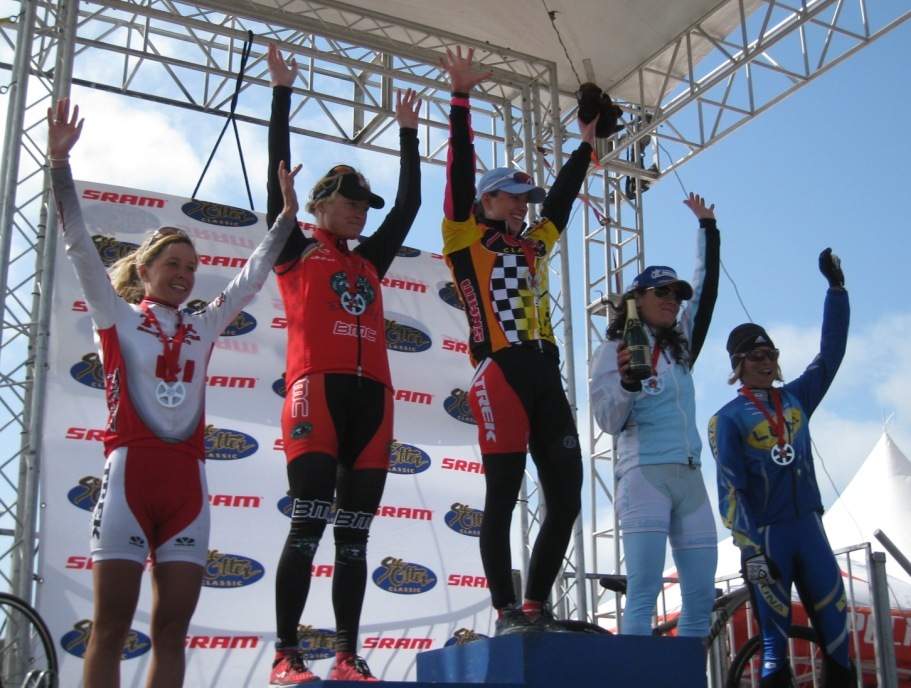