Jan. 29, 2008 — I have a very strong passion for the sport of cycling despite my new excitement about triathlon. I guess once you are a cyclist, you are always a cyclist at heart. This past weekend I had the opportunity to travel down to Santa Rosa, Calif., as part of the BMC “World of Sponsoring”. I was there to pose down with the new BMC women’s specific “Shiver” dual suspension mountain bike. During the trip I had the chance to hit the road with the BMC boys on two occasions. They are a great team, both the riders and the staff, and they truly made my weekend special and really kick started my enthusiasm for the 2008 season.

Our first night was in Palo Alto after which we moved to Santa Rosa. When we arrived I had the chance to swim in a pool adjacent to our hotel (dubbed the “Flaming O” by the guys but really it was called the "Flamingo"). I was late to join a masters group but found the locals were very friendly in helping me get oriented on their local pool etiquette. Triathlon is reinvigorating the masters swim clubs across the country! My hair and swim cap were heavy clues for a number of the swimmers that I was a particular pro on the XTERRA circuit and the fact I was recognized just goes to show that triathletes are taking over! 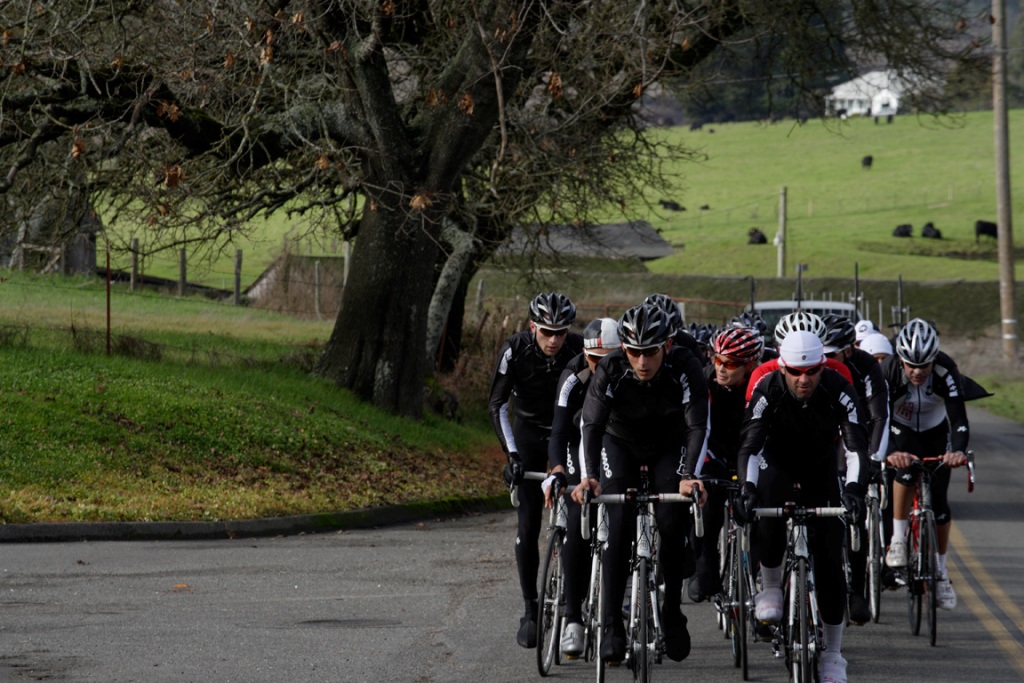 The team was creating some noise in the California area. Santa Rosa is a little hotbed for cycling and is home to none other than America’s favorite cycling son, Levi Leipheimer. In fact, the Tour superstar actually dropped in on a dinner we were having one night just to say hello to the team and say "happy birthday" to Mike Sayers, who was celebrating that night. A few of the guys on the team actually live in the area and train with Levi so it was pretty cool to have him coming by to hang out for a while. We also rode to the “Service Course” where all the BMC team gear is warehoused and met with Team Swift, a junior team that is sponsored by BMC and mentored by the pro team. It was great to see all the young teenagers rubbing elbows with their cycling inspirations.

My job was actually just to be a mannequin for the weekend, so my training schedule was not as vigorous as the boys. But once I got my photo taken eight million times to get the exact right ONE photograph for the marketing magicians, I was free to go ride with the team. I did get to do some fun riding on the Shiver to get some video on a trail while the photographer drove alongside in a topless Ford Mustang. By the end of it both the bike and I were covered in mud so I felt I truly ran the bike through its paces.

My favorite ride was on Sunday morning. We all met at 9am at the big fancy BMC rig with the washing machines, the bike hangers, the tool boxes, the couches and the fridges (a bona fide awesome race truck). Sunday was exciting for me because I was the only non-race team athlete on the ride. We were riding five hours starting with the Trinity climb from Stage 3 of Tour of California, paying special attention to the descent after the climb and then doing 2x 15-20 minutes of team time trial. I was nervous, to say the least. I brought a map, a pump, two spare tubes and my phone in case a catastrophic explosion of my legs happened somewhere along the way. Charlie Livermore, a team director I know from way back when I was a pro mountain biker, assured me that since I am Canadian I would be tough enough for the ride. Charlie worked with Alison Sydor on the Volvo team back in the 90s so he is well versed with the culture I grew up as a cyclist in: Suck it up when you are hurting and then if you can’t stand it, suck it up a little more.

We rolled out of the hotel with our entourage of team car and a reporter with a photographer. They were taking photos of the team the entire day. It was about an hour into the ride that we hit the Trinity climb. I was getting reports from the guys that the climb was about 18-20 minutes and it was quite steep. Now, this team is headed for the Tour of Qatar and I have been doing the Tour of Everything Tasty for a few months. We were going about 15 km/h up a steep, switchback road with slow and rough pavement. The team was riding a good “tempo” and at 12 minutes of crazy watts on the Powertap, I was absolutely headed for the red zone and complete explosion and we had four hours of riding to go. I drifted back to the car in shame. I held on to the car through a couple of turns to recover then flung myself back in the mix only to drift back to the car again, with burning legs and cheeks of embarrassment. On my third attempt I did stay, only because there was about 400m left of the climb. The guys said nothing because I think it was just assumed I was not going to stay with them. I enjoyed the banter between the sprinters: “You call that tempo, my legs weren’t thinking that was tempo” and the climbers: “It was a COMFORTABLE pace!”

After the climb was an incredible descent, complete with hairpins, off-camber corners and mossy wet pavement. Ah, the fun part, going downhill! Here I did manage to stay with the group which was probably more important to me because I wanted to let them know that, although I am a girl and a triathlete, I have good bike handling skills! There are some bad stigmas and incorrect stereotypes associated with both of those conditions that I was dead-set on contradicting.

After the descent, we were rolling through the Napa Valley countryside. It was a gorgeous, sunny day and about 60 degrees, essentially perfect winter conditions. We came to a straight stretch of road and Charlie indicated it was time to practice time-trialing as a team. My direction was “Melanie, just try to hang on the back of the group”, which ended up being a decent workout for me as well. Motor-pacing on a scooter is not as cool as motor-pacing a pro team. I was pretty stoked and got a couple words of encouragement from the guys when they didn’t drop me during the intervals. Ah, success!

The only hitch for the weekend was when my saddle almost dropped off from some shoddy mechanic work (completed by me) and I had to go back to the team car to have it tightened. It was cool to roll back and see John Lelangue in the car, pretty much as close to experiencing the Tour de France as I will ever get, and have him remark after the incident “she should have been on the other side of the car, she is going to get hit by oncoming traffic.” A photo of the incident indicates that yes, I was in the middle of the road. I am a road rookie, no matter how many years of racing on the road as a mountain biker I have done. 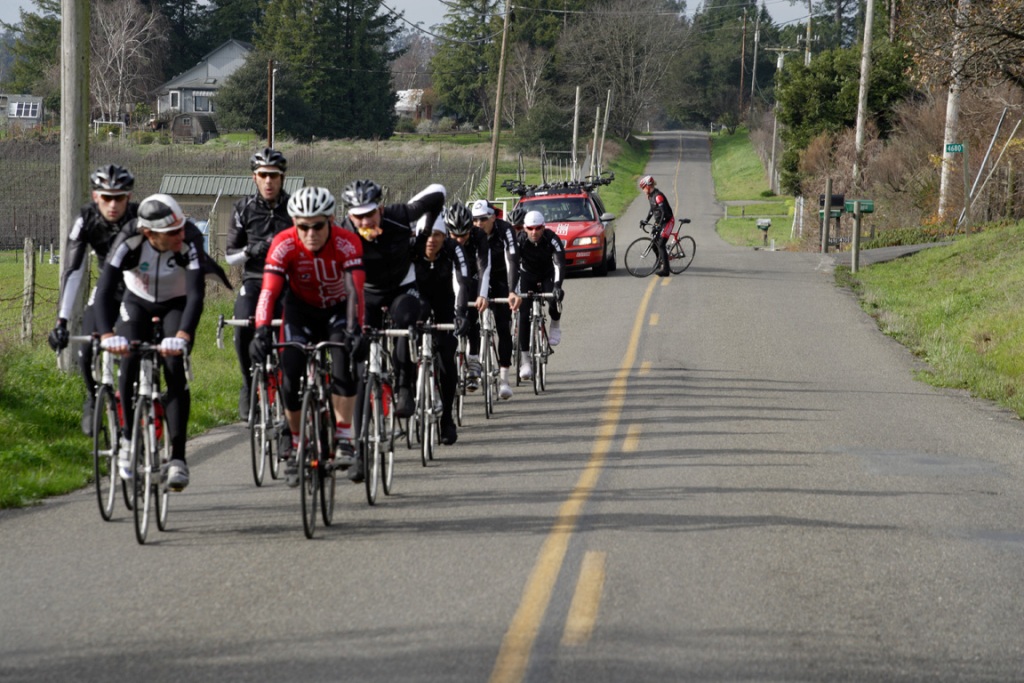 Riding with the team was only half of my excitement that day. We also rolled past some of my favorite wineries in the Russian River Valley and the Alexander Valley. It was spectacular to cruise past large vineyards and estates in the Napa Valley. If you ever have a chance to go and ride your bike in Napa or Sonoma you really should. It is fantastic. I am thinking the Vineman 70.3 needs to be added to my schedule for next season.

So after the ride was finished, the guys rolled their bikes to their mechanics and went inside to eat lunch, get massage and nap. In contrast, I frantically packed my bike, ate a Nature’s Path bar and went to the airport. Not as "pro" a finish to the day, but an upgrade at the airport definitely improved my "cool" factor. It was a great weekend as part of the BMC family and I am really looking forward to watching the team in Tour of California under the tutelage of Gavin Chilcott, Charlie Livermore and Roger Lelangue. Thanks very much guys for treating me to some fun training and all the best to BMC for 2008!