I flew to Vermont hoping I had enough in the tank to finish with a big W for this first half of the season.  Didn’t quite happen but I did have a wonderful time visiting northern Vermont and raced well.  I was lucky with the weather and rode in the sun every day despite torrential rain leaving all of the trails muddy to the maximum and massive amounts of rain falling the night before the race.  I was excited to ride in slippery, technical conditions but unfortunately a little too MUCH rain meant the course was un-rideable for much of the bike course.  This sort of cancelled out technical riding ability and increased the amount of running required for this race.  More running was not good news for a girl dealing with a foot issue so the course did not really play into my strengths at the moment but I did my best with what I had.  Renata Bucher had a better race than I, taking the lead on her way to a much deserved win on the second lap of the run .  This was her first win in the United States (she is a multiple European Tour Champion and Global Tour winner so no stranger to the podium) and overall the race was blown apart.  Renata and I ended up in the top 10 with the pro men as the carnage and gaps in finish times was incredible.  Shonny V had an epic crash on the course before fighting her way into third, Christine Jeffrey had a solid fourth and Danelle Kabush ran up to fifth.

The men’s race was particulary exciting.  Nico Lebrun was in his element and solidly won the event but Conrad was holding strong until the last descent into the finish where Seth Wealing had an amazing final sprint to steal second place at the line.  Fourth went to Sam Gardner from the UK who nipped Dan Hugo by the line.  It is notable that both European Champion athletes, Renata and Nico, both being former champion duathletes, ended up winning the event.  They both excelled at the bike/run/bike/run transition that we did the ENTIRE race.  Regardless, fantastic performances by them, a great breakthrough for Renata and I am happy I held strong to keep a good lead on the overall points series with second place more than 50 points behind.

I was fortunate to visit the Catamount Bed and Breakfast and the Catamount Outdoor Family Center, a beautiful place in Williston, Vermont where they have miles of cross country trails built for skiing and mountain biking.  While I was there they were hosting mountain bike camps for kids so all weekend there were hordes of nine year old “Little Bellas” (the group coached and mentored by Sabra and Lea Davison of mountain bike fame) and Bliss development kids riding their hearts out.  Don’t be surprised when the US Cup mountain bike series is dominated by kids from Vermont ten years from now.  The passion and dedication from Lucy and Jim running the B&B and the Outdoor Center as well as Eric and the coaches putting their hearts in the program is going to yield awesome results.  Thank you to the family for their hospitality and kindness.  I had a great, restful time hanging out in the Gilles Chittenden Homestead, build in 1796.  It is beautiful in Vermont… although the course was not in “beautiful shape” so read on for more pictures and more race details… 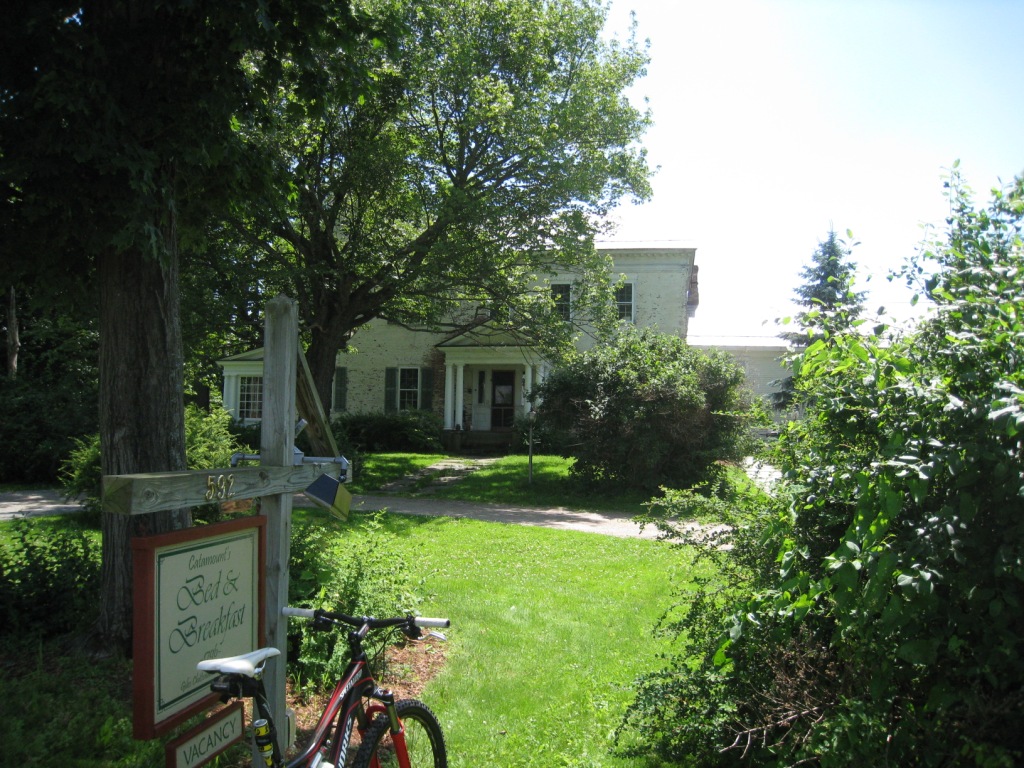 The B and B in Vermont

The swim was in a snowmaking pond down at the bottom of the mountain.  The race was point to point with two transitions similar to Ogden.  So I set things up the same way I would for Ogden and was a little late for the start which in the end didn’t matter because the race was delayed.  So I had time to get organized and ready to start well in the swim.  I started awesome and I could see two faster swimmers RIGHT in front of me.  Unfortunately, I got trapped between Dominic Gillen and Nico Lebrun and Nico was clobbering my right arm and slowing me down.  By the time I extricated myself from those two I was five strokes or so back from Dan and Conrad.  I dug super deep a couple of times between the first and second buoys to close the gap but I missed out and it was too late.  So close!  Next time I am starting very aggressively because I really am swimming well so with some decent feet I am going to really take advantage of it. 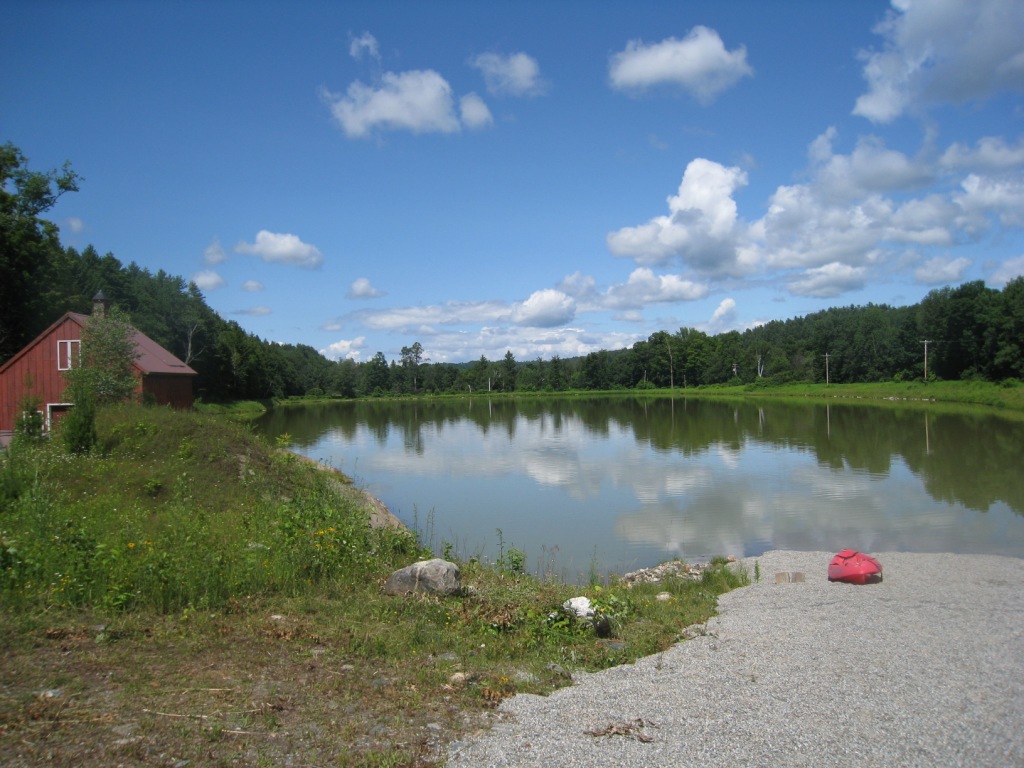 Coming out of the swim I hopped on the bike to start the bike/run to the top.  I have to admit I was having a hard time going “hard”.  The constant disruption of any rhythm, a bit of frustration making mistakes along the way and the fact that granny gear wet mud is not my favorite meant I was less focused than I could be.  I tried as hard as I could but like I said, this really wasn’t 100% my cup of tea.  Had it been either less steep or less wet I might have stood a better chance against 100 pound Renata but it was only a matter of time.  I held her off on the bike but the run was going to be a problem. 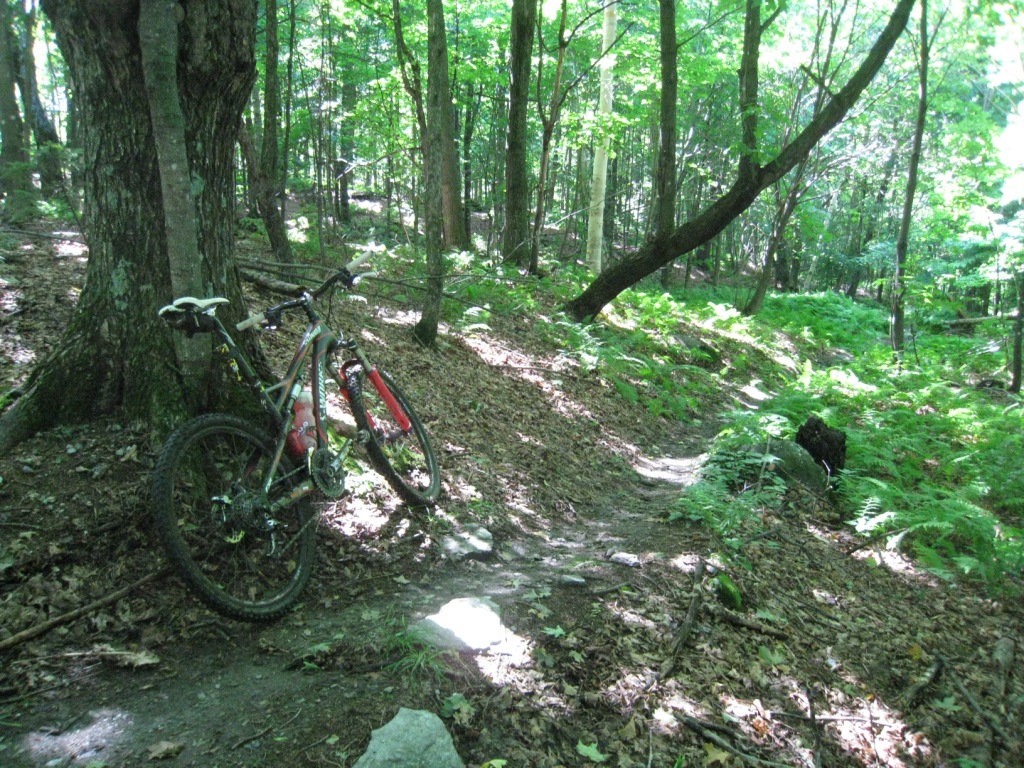 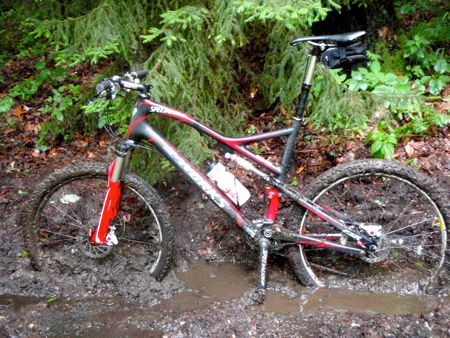 However as this photo of Conrad’s bike illustrates.. the trails were not in their best shape for the race

When you add up the bike and the run for this race there is almost 7000 feet of climbing in the granny gear and a straight uphill running.  The run course went straight up for 15 minutes, went straight down for maximum 2 minutes, straight up for another 5 minutes then straight down about 500m to the lap point.  So as you can tell, there were about 2.5 minutes of vertical downhill in an otherwise super long vertical uphill race.  The only thing that would have made it any worse would have been altitude so luckily the mountain was too low for that.  The lack of any appreciable descending or flat terrain on the run course didn’t go well after my lack of quality run training.  I went out on the run going as hard as I could and caught Dominic Gillen but then the second lap I hit the wall.  I totally blew and could feel a rush of air as Renata levitated up the climb and proceeded to put four minutes into me in one lap.  Seriously.  I held the gap for one lap and then BLAMMO!  I was done for.  Luckily everyone else in the race was also suffering their own private battles to get up the hill and the race was blown to pieces.  I actually anticipated that since most mountain bike races I have done have resulted in huge gaps when the race is super mucky and this event was no exception.  It was a long way to third so luckily I had plenty of time to haul my butt up the last climb and run it in to the finish.

After the race we had some awesome food, great comraderie and were given some great prizes including Vermont maple syrup which was a complete hit.  Thanks to Sugarbush Resort for hosting, for Chad and Eric doing a great job in pulling off the event, to Team Unlimited for being there to make it official and to all of MelRad Racing for putting on a clinic on how to be FAST.  Kristoffer Neilsen again won the overall amateur race, Keri Grosse and Heather McNamara both won their age groups, Greg Seaman was second, and Don Kinne had a blistering sprint into the finish which mirrored that of Seth and Conrad…all sporting their new MelRad Pactimo race kits.  Awesome job guys!  Thanks to all of my sponsors for supporting me and giving me their blessing to scratch Vineman and Beaver Creek to get healthy and focus on a build to the second half of the season.  Up this weekend?  A trip to Whistler.. yay! 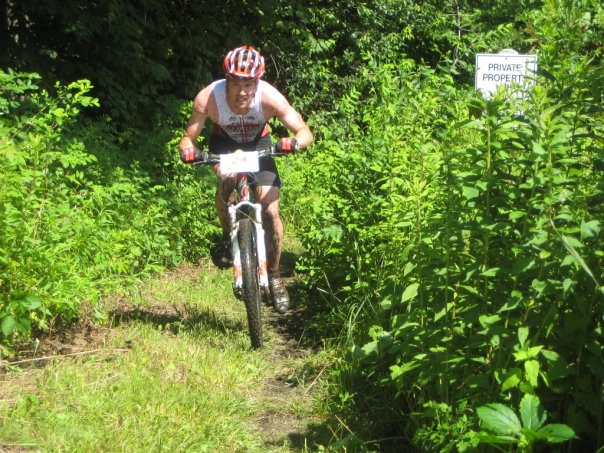