For 10 days after the NOVA race, I was training in Mesa, Arizona, a Phoenix suburb southeast of the city. Most of the roads I was training on were used in the Arizona Ironman the week I left so I had a good idea of what that race would be like. Windy! I was hosted by Debi, Kevin and Tiffany and my little mini camp was awesome. I think I got a lot of hard work done thanks to good weather, good friends and huge motivation. It is amazing how a little sunshine really changes my attitude as I was getting pretty desolate in the Victoria rain before I left to do the NMBS race.

After a day or two of somewhat casual training to recover from the mountain bike race, I hit the training pretty hard for about 9 days. Is this the best thing for Sea Otter? Probably not, but when your main focus is Xterra some mountain bike results may become casualties. I was focused on a hard block with some solid run volume. I also wanted to use the long climbs that are available in Arizona so along with the running I had a date with Mt Lemmon and a lot of plans with Usury Pass. Arizona is fantastic in April as the weather is ideal (80-90 degrees) and although the traffic is insane in Phoenix, if you can get out of the city it is so picturesque. That said, drivers in Phoenix are incredibly inconsiderate, bordering on homicidal, so I would be on your guard at all times riding in that city. The naive little Canadian was shocked and appalled at some of the behavior she witnessed in Phoenix. Can’t we all just get along, people?

The second night in Phoenix I visited the Phoenix Tri Club for their monthly meeting. What an AMAZING organization! The junior program is so incredible. I actually got to meet their main elite juniors, including Stuart and Claire Moty, and it is so motivating to hear how stoked they are about racing. In fact, Stuart wanted to talk mostly about mountain biking as he was pretty keen to buy a mountain bike. See, eventually everyone will be assimilated to Xterra.
I averaged about 4500 yards/day in the pool (about 18,000 per week) but still felt awful in the pool. Whenever my bike volume and intensity is up I pretty much suck at swimming. When this happens I go into the “gederdone” mode which is, look at the clock but only to leave on the correct interval. I don’t freak out about bad blocks of swimming because I know as soon as I drop the volume it will come around. In general though, it sucked.

For the runs I got in a fartlek run on the canal, a couple runs off the bike, a hard builder treadmill workout and a 1h45 run at Usury Mountain Recreation Area. The highlight of all the runs was at Usury. We did an amazing run on the Pass Trail where I saw a live rattlesnake (Kevin had to convince me to run around it because I was ready to go back). In fact, I saw another one on the Blevins trail as well and I guess April is the time the snakes come out of hibernation and are hungry, which is why you would see them during the day because they are actually nocturnal. Welcome to Animal Planet c/o Mel.

On the bike I got about 20 hours done with a day at Mt Lemmon (we basically rode directly into a tornado the wind was so brutal), four days on Usury Pass (my interval location of choice) and a loop past Saguaro Lake where the AZ Xterra is held. Usury Pass is about 3.5 miles long so it is a good short interval spot. I was focused on aerobic power intervals (desperately trying to find some speed at these early stages of the season). Using my Powertap, I will accelerate for 5-8 seconds and hold that power up to 15 seconds, then pedal smoothly for 15 seconds in the same gear and accelerate again. I will go on 15s and off 15 seconds for 6 minutes with 3 minutes recovery. This is my favorite workout for trying to find race pace. 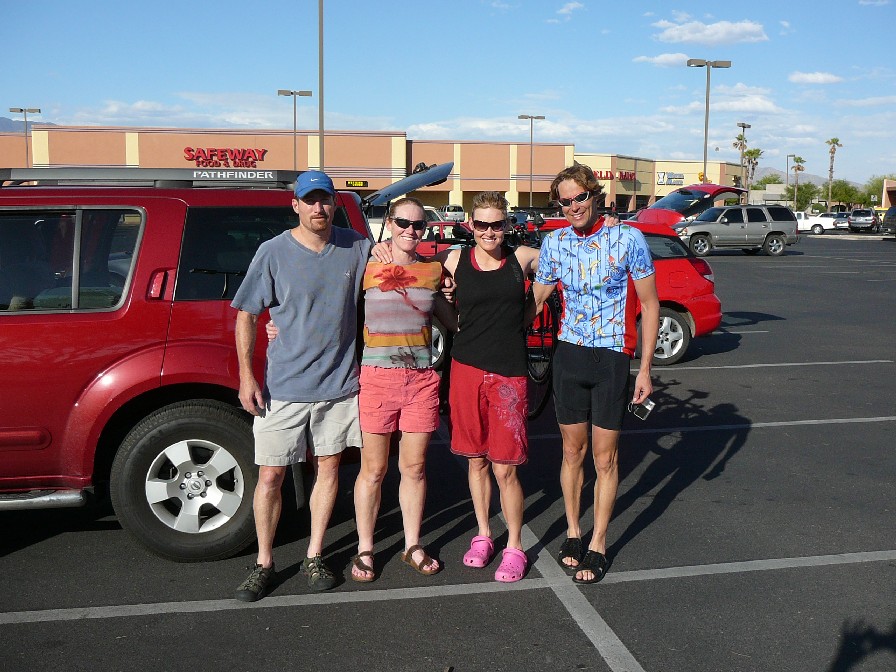 I spent Easter in Phoenix so I was invited to Kevin’s parents’ house out by 9 mile road in North Scottsdale. His father is an architect and has an incredible house with windows all around so you feel like you are in a fishbowl with desert wildlife all around you. I saw a pack of havolina go by (giant rats basically) which is another cool desert critter you don’t see very often. Some interesting conversation and Swedish princess cake made the evening a very enjoyable one. I also went for a barbeque at Mark and Kristie’s house where they have (I am so jealous) a wicked lap pool! They actually live right next to the Usury Recreation area which is a perfect spot for triathletes to run and ride with relatively little traffic. Fun night with funny people.

All too quickly it was time to pack up again and head to Monterey. With some good mileage in my legs I was focused on my best effort for the next event. Thanks again to my friends in Phoenix, I look forward to my next visit!