So after the race in San Dimas I drove to Tucson, Arizona.  My plan was a three week cycling build to get my bike legs back up to speed.  Although I am happy with how I performed in San Dimas, I really have done more running than cycling so far this season because of poor weather in Victoria.  In reality I was well behind where I planned to be at this point in the year so this trip to Tucson couldn’t have been better timed.

We are lucky to have our friends Kirsten and Murray.   In addition to being a load of fun, they rented an enormous house in Tucson and invited Ross and I to come stay.  I ended up having a homestay in Tucson with friends from Victoria, a perfect mix to try to stave off homesickness!  Kirsten and Murray were wonderful housemates for this whole trip.  I am not sure they expected me for three weeks… but I tried to make up for it by being the resident chef.  My first week with them I got myself organized, did some of the Tucson Bicycle Classic and gathered Ross from the airport.  Part one of the story will be the week and a half with Ross.. part two and maybe three will be the finale of the trip.  This is part uber-geek training recap and part interesting adventures during our stay in Tucson….READ MORE 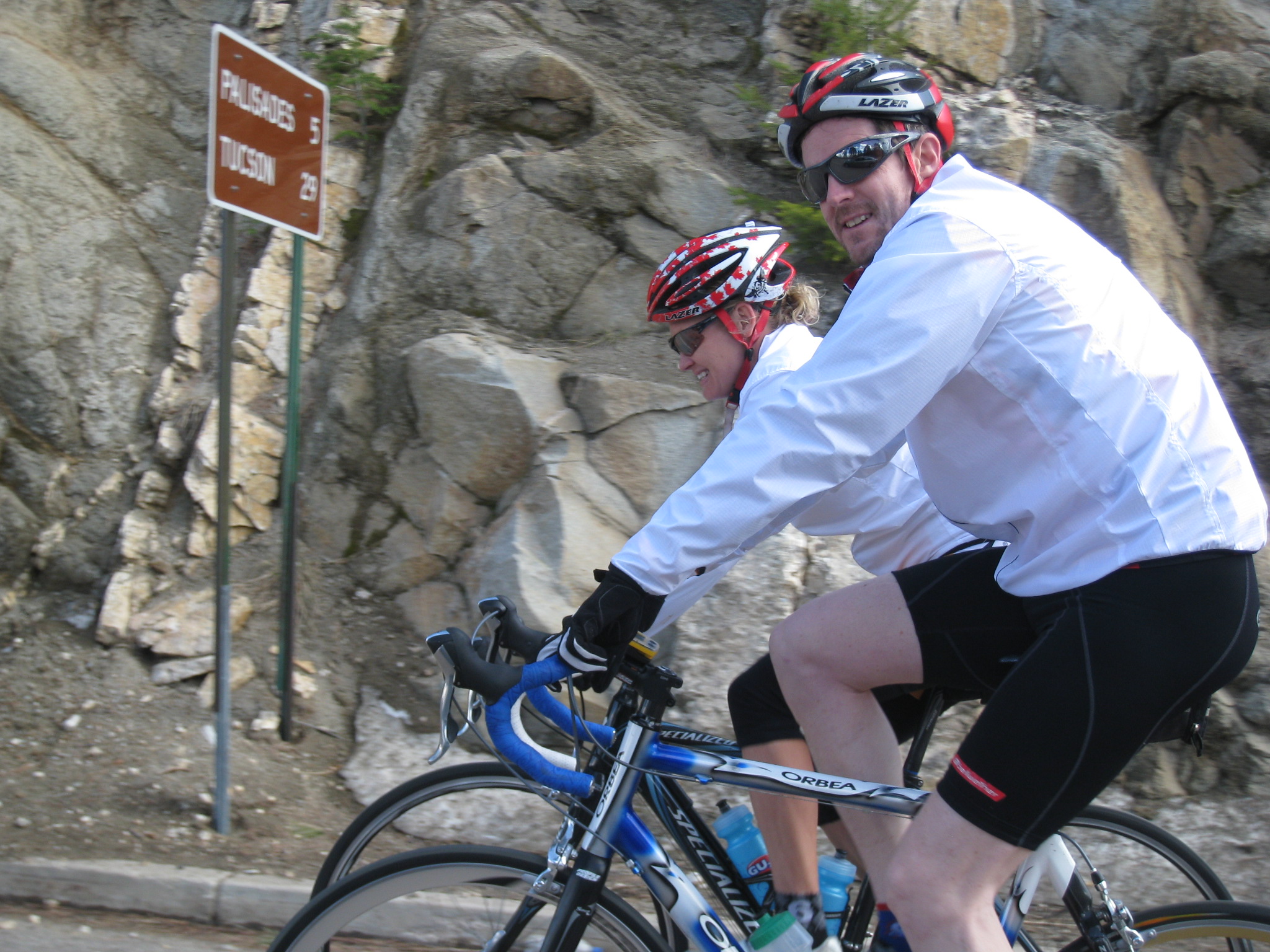 I think I will start the story with the first Sunday after Ross arrived.  The plan was a long run of 1h35 minutes.  In that run I planned 20 minutes of steady state on a flat road and then 20 minutes running hard up the Phoneline Trail in Sabino Canyon.  In order for us to do this together I ran from home to do the first steady state and then Ross warmed up during the break between efforts before I gave him an 8 minute head start up the trail.  He was my rabbit. 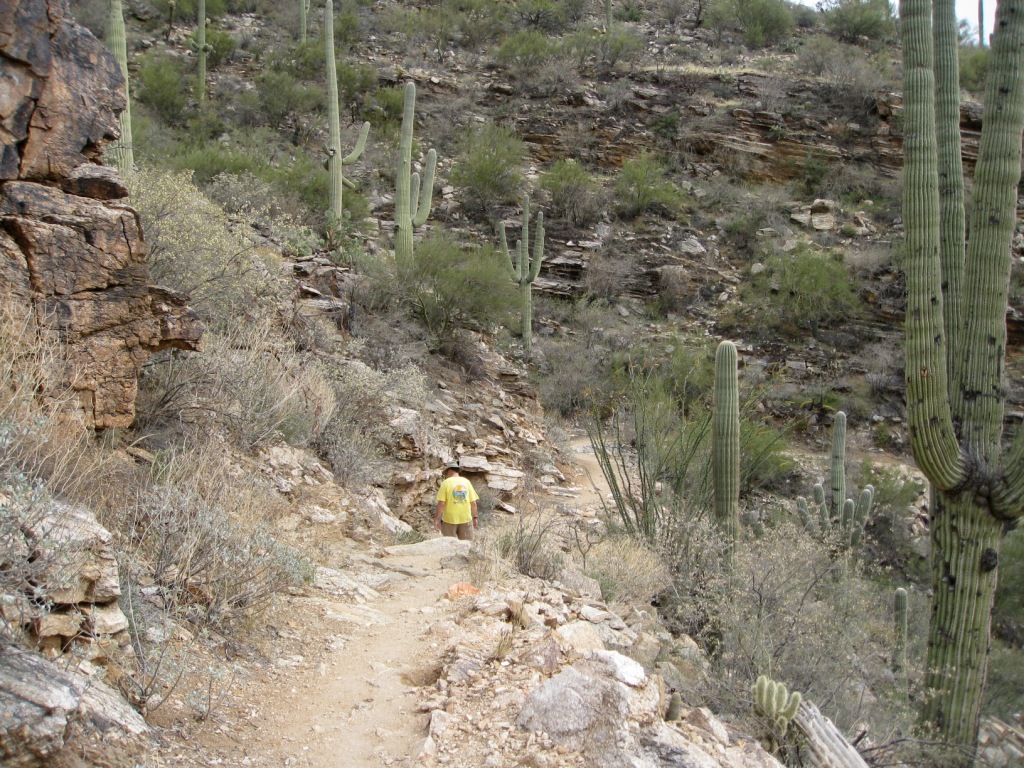 So eight minutes is a long head start.  Plus, Ross is fast.  Never mind the fact he spends way more time in an Aeron office chair than on a bike seat, Ross is a natural athlete.  So when he is faced with a challenge from his woman, he rises to that challenge.  I ran so hard up that trail and never, ever caught him.  I ran the steady state for 20 minutes and still couldn’t see him.  I kept running sort of hard and after almost 35 minutes of running up that trail was just catching glimpses of him.  He stopped just before a cool viewpoint and said I was still 3 minutes behind.  Wow.  Of course, at that point he was finished and ready to be carried out but I admire the motivation to kick my butt!  It was a solid 1h45 minutes of running for me.

The second week in Tucson went as follows:

Monday: Easy swim in the morning followed by a trip to Tombstone Arizona.

Tombstone is home of the OK Corral, the Oriental Café, a number of gunshows and locals that are likely to be fugitives from the law dressed in Wild West costumes so as to not be discovered.  I admit, I had never heard of the OK Corral or Wyatt Earp.  Tombstone is a cowboy town with lots of cowboy stuff.  I have the button “I shot the parrot in Tombstone Arizona” to prove I was there.  You have to go there to see what that means.  It was definitely a “guy” day for Murray and Ross.  Kirsten and I had fun indulging them in the silliness of it all. 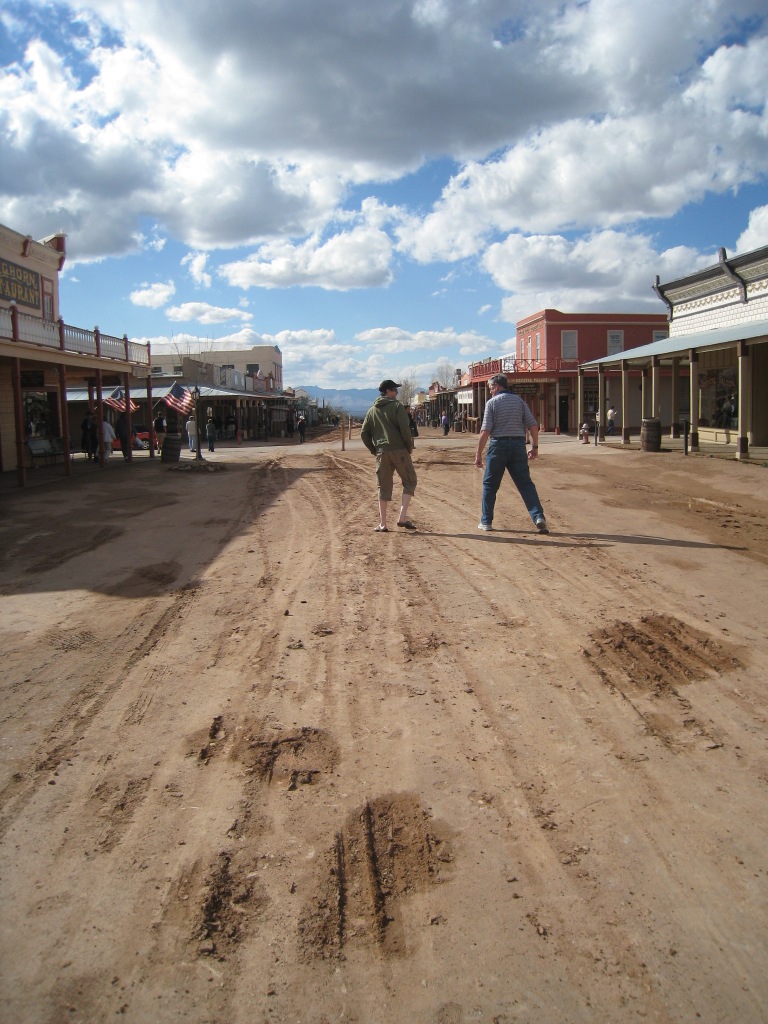 The boys cruising the strip

Tuesday:  Intervals on Mt Lemmon to the 12 mile marker with Ross.  I did intervals, Ross rode steady and I doubled back for him.  Then a run off the bike of 4x5minutes race pace and a 4.5km swim.

Wednesday:  Group ride in the morning was pretty easy – definitely not the Wednesday ride from the past!  Hard 5km swim in the afternoon.  Holding solid times for 4×400 yards best average.

Thursday:  Mt Lemmon to the top with Ross.

This was a fun day.  Ross and I both left the house at the same time only Ross was in the car.  He decided all the fluff riding to and from the mountain wasn’t for him…he only wanted the meaty part of the workout.  So that gave him a little under 30 minutes of a head start.  He rode incredibly!  He said he was holding 6 min/mile which is very solid for a non-road bike riding individual (Ross prefers to mountain bike almost exclusively).  For those not in the know, Mt Lemmon is a 24 or 26 mile ride to the top (depending on where you want to finish) and probably averages somewhere between 5 and 7% grade with more and less along the way.  I caught Ross at the 14 mile marker and was so happy to see he still looked fresh and motivated so I wasn’t worried I would have to talk him into finishing.  I was riding hard so I just kept plugging away to the top and then turned back to pick him up.  As I was heading back down, Ross came barreling by me… on his way to breaking 2h30 minutes to the top.  For a non-racing individual Ross is very competitive!

So we went to the Cookie Shack to contemplate our accomplishments with our friends Murray and Kirsten who were along for the ride videoing Ross’s first ascent in the car.  Unfortunately I had dropped one of my gloves somewhere along the way and I was not happy about the possibility of a bare hand on the way down since the temperature was very cold at the top.  Luckily Vic Zimmerman, proprietor of the wonderful Cookie Shack in Summerhaven happened to have a selection of orphan gloves for me to adopt for the return trip.  Thanks Vic!  You are a star! 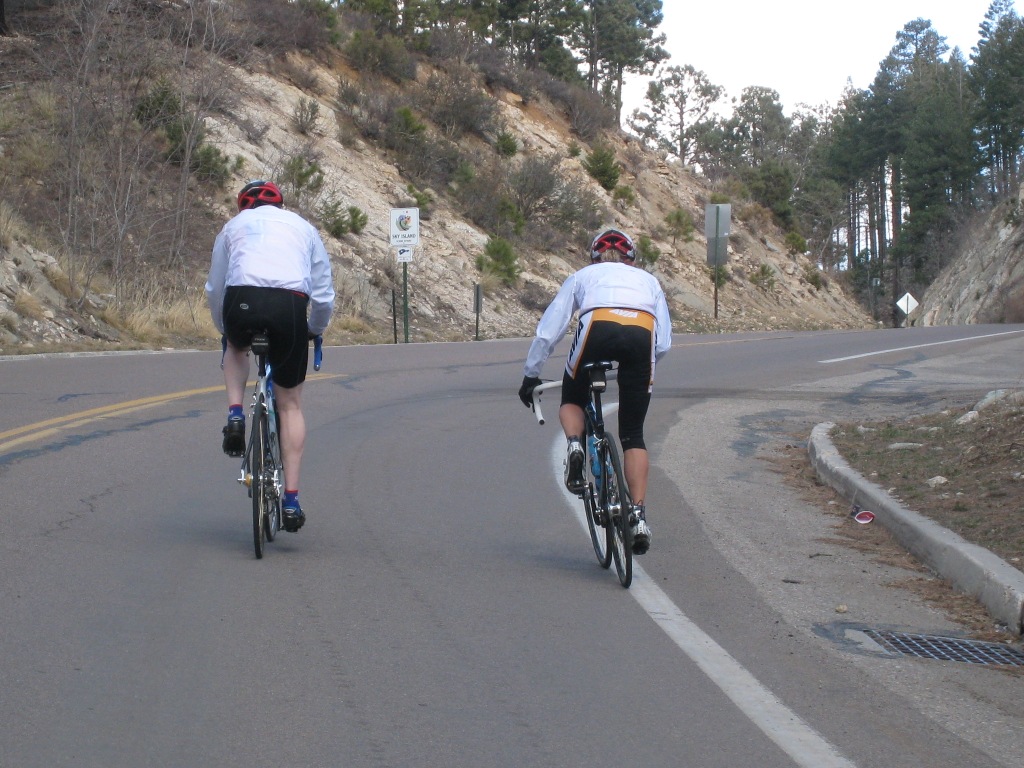 The rest of the week went as follows:

Saturday Intervals up Mt Lemmon on the mountain bike only to the 5 mile marker and then some mountain biking in Molino Canyon, followed by a swim in the afternoon.

Sunday: Pursuit intervals up Sabino Canyon’s phoneline trail with Ross  again after another 20 minute steady state.  I only gave him three minutes and it still took me 26 minutes to catch him.  I think he gained 50% fitness in one week.  It is not fair but it does show I am a good coach right?

I did an easy spin in the evening.

Monday:  Ross to the airport at 4am.  Unhappy to see him go!

The week total was 27hours but the week after he left?  30!  So stay tuned for Part Two of the Excited States adventures! 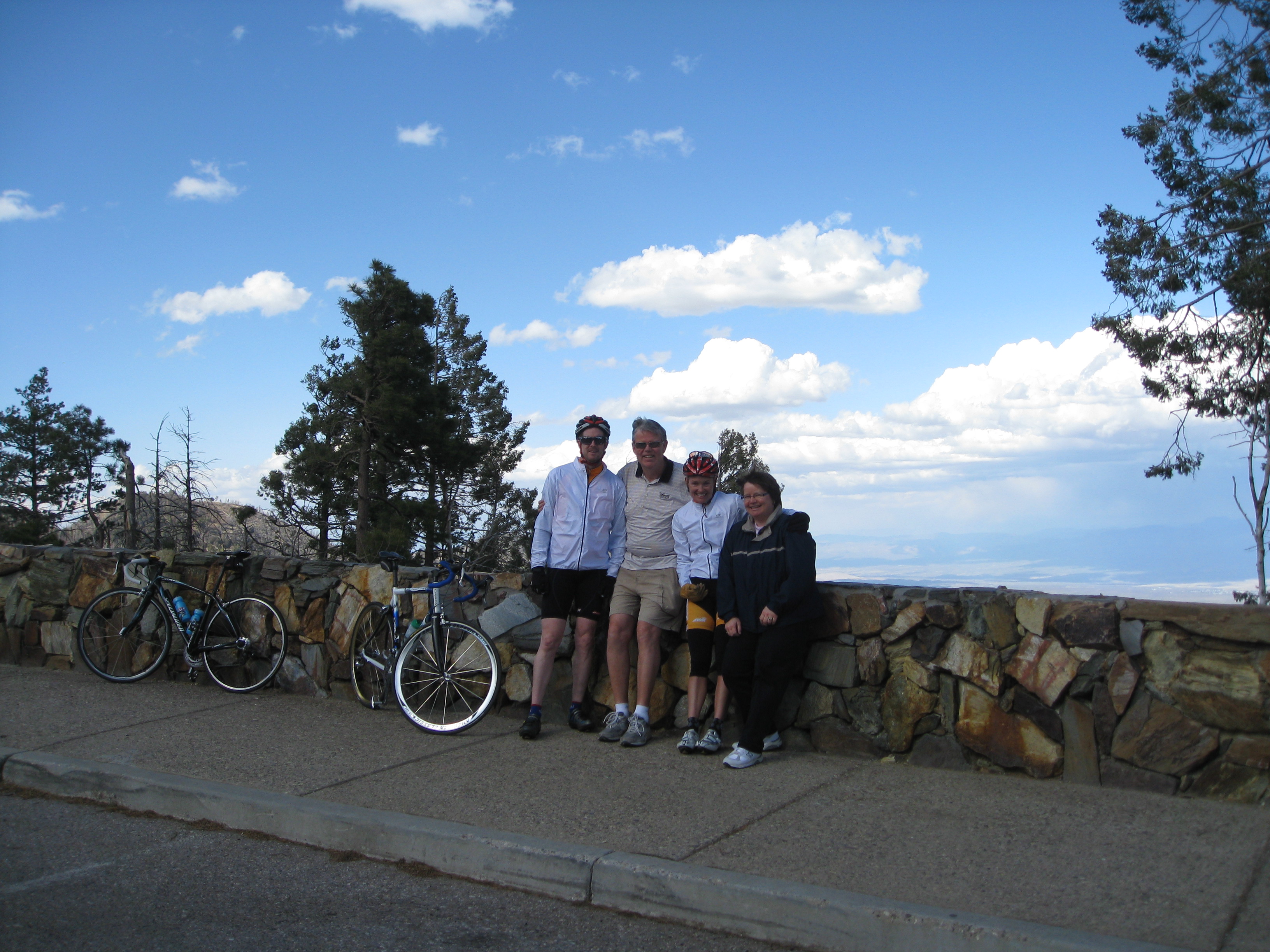 Ross, Murray, Mel and Kirsten on Lemmon… nice to have our friends cheering us on!