I spent a total of three weeks in Tucson training.  The last week topped out at 30 hours and my legs were happily sore and tired by the end of the three week build.  I had some really great training sessions and even had some company from Sam McGlone during that week.  I am definitely feeling fit and was excited to hit the second US Cup mountain bike race in Fontana, California.

Before I get into the microscopic details of the last two weeks here is the good and the bad from the Fontana race.  First, the good stuff.  My overall race was much, much better than last season.  I think I have a really solid base right now because although I dropped to ninth by the end of the race from about sixth, my last lap I was gaining back time on Kelli Emmett and Monique Sawicki.  In the past I would have been fading quickly after 90 minutes of racing so to have a strong last lap and actually still feel very strong at the finish is a testament to how awesome my Specialized Era is and to how fit I am right now.  Another race positive was my descending was very good and I gained time on anyone I would follow downhill.  I also managed to ride the entire steep climb twice when I was not in traffic which felt good and the other positive was that no matter what I was feeling in the race I was having fun suffering through it.

The aspect of the race where I need improvement: the speed killed me on the first lap.  The pace that was set by Georgia Gould and Catherine Pendrel at the front of the field was too much for me.  After one lap I was DONE, stick a fork in me, must slow down now.  Doing two hour intervals on Mt Lemmon doesn’t really make you speedy, it makes you strong. It was a good reminder of how fast you can go on a mountain bike and having these fast mountain bike girls drag me around the course faster than I would have chosen is PERFECT race preparation for me.  My training actually came in handy on the first lap when we ended up having to hike the last bit of a steep section because of traffic -I managed to run past two or three people.  A bonus that my running would be helpful at a mountain bike race.  Now if only we had to run the last lap of the race instead of riding… that would have definitely moved me up at the finish!

Despite not having much speed I still rode strong in the top ten, finishing ninth which is a HUGE improvement on my poor finish in this race last season.  My next mountain bike event will be Sea Otter and even though I am going to work on a more balanced program including all three sports for the next month to prepare for Vegas I look forward to working on getting more speed into my legs.

So on to a recap of the training in Tucson, my sponsor/photoshoot week in Laguna Beach before Fontana and my trip home through Sonoma with a BFF getaway at the Fairmont Mission Inn…

As I already mentioned, my last week was a 30 hour odyssey with 21 hours on the bike racked up on the roads and trails in Tucson.  Key workouts were an assault on Mt Lemmon to Ski Valley, a steady state long run with Sam and some fun mountain biking in Fantasy Island.  The Mt Lemmon day was really fun and I took a full four minutes off my time from the previous week averaging sub- 5 minute miles the whole way (not even including the downhill miles where you get more than two for time of one).  We ran on the Broadway Trails which are killer and the run was a solid 1h 45 minutes for me with 2×20 minutes at a solid pace (15.9km/h average at 180 bpm for me is pretty solid with low effort… I race at 195 bpm).  Mountain biking in Fantasy Island was fun and I was so excited to not ride my road bike that day… I definitely prefer to mountain bike.

The week after Tucson I was in a hotel near Laguna Beach.  On the schedule was shooting a short video for AVIA, a photoshoot with Nils Nilsen and the guys from Triathlete and a race in Fontana.  In between I sandwiched swimming, pilates, easy spins, the hard Wednesday ride in Carlsbad, a treadmill run, getting a new bike sorted out, a number of crashes on the new bike and some athlete coaching.  It was a very, very busy easy week.  I think both the video and the photoshoot went well.. here is a funny outtake photo with Mel running like a girl: 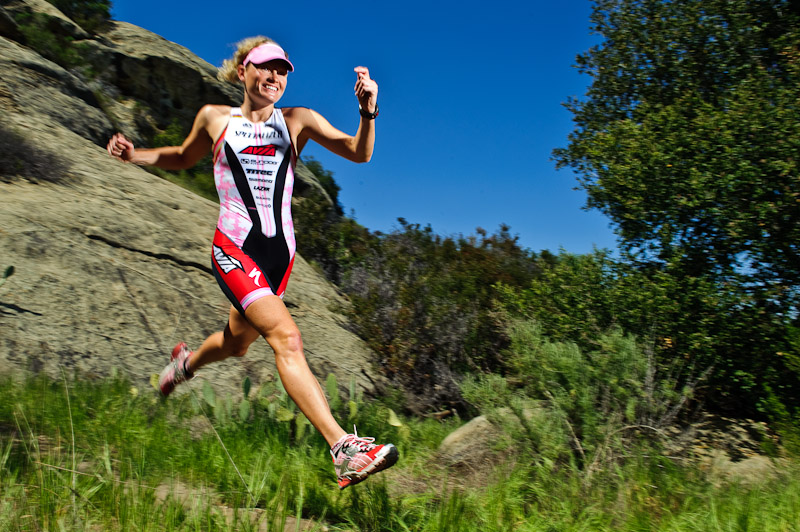 So once I had finished all my obligations, crushed myself at the mountain bike race and repacked the car with a mountain of gear, I pointed the car north and drove like a maniac to Sonoma.  I was meeting my friends Maia and Todd at the Fairmont to have a three buddies weekend in wine country.  We had a super time in the spa, by the pool and at various wineries and beautiful spots in Sonoma.  It is heaven there.  We really enjoyed visiting BR Cohn for the olive oils and De Loach to learn about biodynamic farming.

But all too soon it was over and Maia was subjected to a Mel-style travel day which included packing the car with goodies from Whole Foods so that any stop along the way would include training rather than a restaurant.  After Sonoma we stopped in Redding so I could get my last outdoor pool swim in.  I swam while Maia went shopping.  We rolled into Vancouver, WA after midnight and left by 8 am to catch a 2pm ferry to Victoria from Port Angeles.  24 hours after we left Sonoma we were home.

I have one more cruisy day before I get back to training.  The XTERRA season is right around the corner.. I’m ready, are you?