This is a two part race report since I have sorely neglected my updates and feel that with the races somewhat far in the rearview its best to update both in a short-ish double report.  I was 5th at the Australian Pro Champs in Mandurah and 2nd at the IM 70.3 Shepparton event.

The first race was in West Australia in Mandurah.  I did not do a lot of research on anything with regards to this race other than discovering the travel from Maui was more than 30 hours.  It was a long way especially since I had to fly to LAX from Maui to then fly BACK over Maui to Melbourne on the way to Perth.  WTF.  However, travelling there was a fantastic decision on my part.  I was well taken care of by Ian Crane of the Mandurah tri club who connected me to Gill and Jamie who were superb hosts. Jamie and I were both racing so cruising around pre and post race was a family affair and I ended up having some local support in the crowd which was awesome.  His daughter raced the kids race and her number was 111, just like I was in Maui.  111 is a number associated with divine intervention and manifestataion which is a bunch of new agey hooey but it is so weird how this number has followed me around since Maui.  I thought it was following my friend Barb because she read about it and experienced a bunch of it but here I am in Australia and 111 followed me there.  Here is a quote on the number:

Angel Number 111 is a message from your angels to be very aware of your persistent thoughts and ideas as these are manifesting quickly into your reality.  Ensure that your beliefs, thoughts and mind-sets are positive and optimistic in order to draw the energies of abundance and balance into your life.  Angel Number 111 signifies that an energetic gateway has opened up for you, and this will rapidly manifest your thoughts into your reality.

I know sounds like massive BS but anyways, number 111 was with me again.

Mandurah has similar temperatures to Las Vegas but a very fast and flat course with a “downhill” current-assisted swim.  I wasn’t pleased with my swim but no time in my wetsuit in the past two months probably contributed to this weak performance.  On the bike I had one fantastic lap where I took back ¾ of the time loss to the leaders out only to fade and lose most of it on the second lap.  I didn’t have one fast step for the entire run and managed to lose a 2km lead to Laura Bennett.  I probably saw that coming when I tried running the day before and my legs felt like tree stumps and running 4:00/km felt like an all out sprint.  All in all, the race had bright moments and some lowlights.  I think I should have travelled earlier to the race.  I didn’t manifest a win.

My feedback to these organizers is having 2km between aid stations handing out warm water is probably not the best in 40C temperatures.  More feed zones are definitely needed here.  Other than that, I loved the event and would go back for sure, maybe travelling a few days earlier to give myself time to loosen up a little more next time.  I loved all the wildlife everywhere (roos, and lizards, and pelicans oh my!) and the seaside towns are very cool.   Mel Hauschilt won the event and is not only a phenomenal athlete… she is a very gracious and conscientious one.  I really enjoyed chatting with her and listening to her post race comments.  She is an excellent ambassador for the sport. 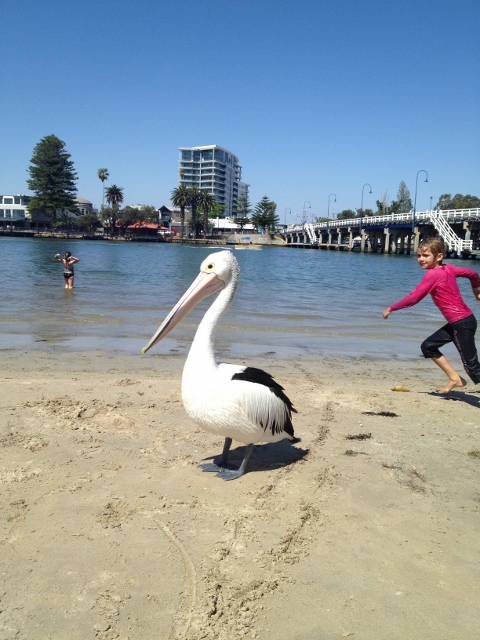 I flew in on an A380 and it was about the same size as this bird. 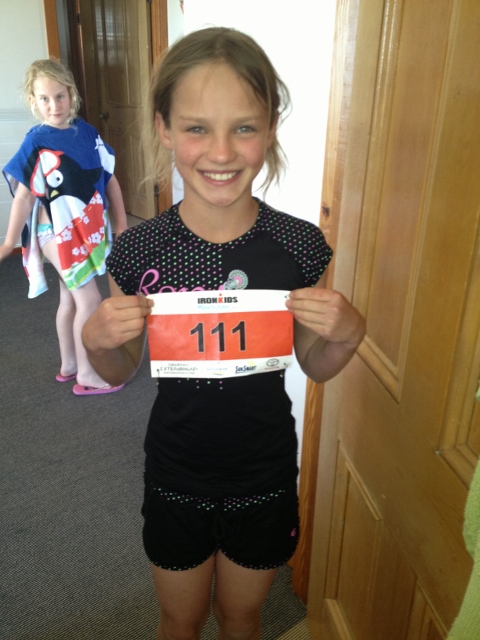 Number 111 was following me. 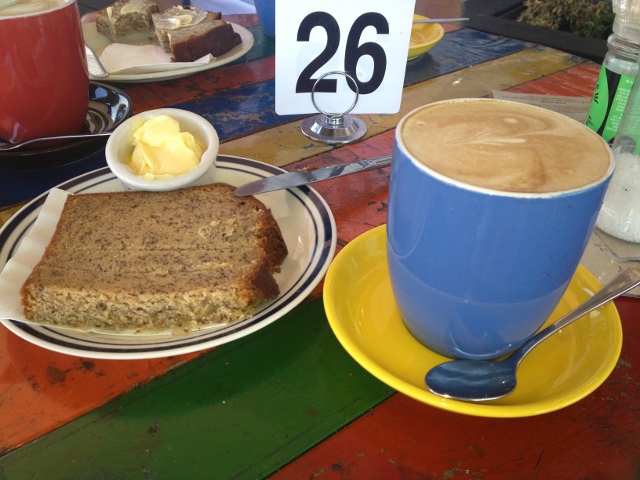 Melbourne was superior to Mandurah for coffee but this spot in Rockingham was awesome. 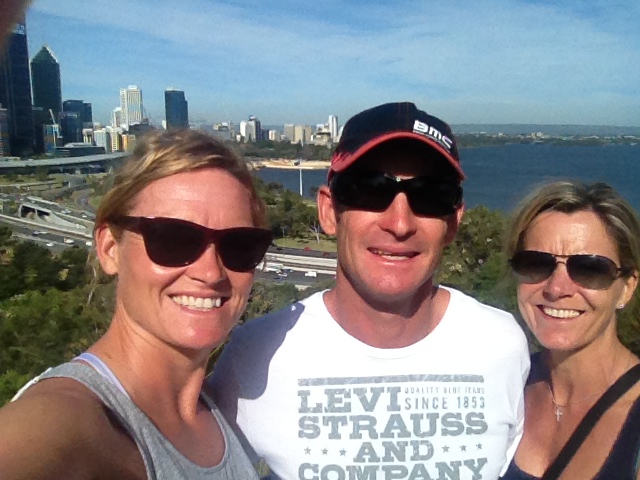 Mel, Jamie and Gillian check out King’s Park in Perth

I then travelled to Melbourne before doing the Shepparton 70.3.  In the days leading up to the race my legs on the bike came around very quickly which was encouraging. However, my swimming and running were stubbornly terrible.  I think I need to run a lot more than I have in the past few weeks with the taper to Maui, the recovery from Maui, the travel to Australia and blah blah I just need more workouts for this stuff.  Whereas for riding, I can take days at a time away and still ride well.  I guess cycling is just part of my genetic makeup whereas swimming and running are foreign entities.  The last couple days before the race I at least felt like I had some shock absorption when I went for runs and my mindset was go as hard as possible.

Shepparton 70.3 is put on by the local tri club and it is the biggest local race I have ever been to.  The event had a complete local grassroots feeling but massive participation and professional execution.  This race further confirmed for me that I want to be at Ironman events.  Even the tiny ones are huge.  All my family and friends at home watched video of the event start to finish.  This is how to run a race!

The swim was in a man-made residential lake that looked like chocolate milk.  There was clay in the soil so the water was extremely turbid.  You couldn’t see a thing 1 mm from your goggles so sighting on feet was impossible.  I swam across the lake to get a good warm up in which achieved the warm up objective right up until I got cold waiting for the gun to go off.  I have never started so slowly in my life.  I was still able to swim on some feet (we started with the men) but I saw the caps of Rebekah and Lisa swimming away from me quickly.

Once we got on the bike the temps were warming up nicely and I cruised off in pursuit. This race was not to be without some turmoil as it seems after my preride of the lap on the very rough asphalt my bottle cage on the front of my bike between the armpads decided to rattle loose.  Coming out of transition my bottle was swaying precariously left and right.  So I quickly reshuffled the bottles to leave that cage empty but it was dangerously close to coming completely unbolted.  I spent a lot of that lap retightening that bolt with my fingers every 3 minutes or so which was a distraction but in the end might have helped me not go out too hard?  Not sure.  I caught Lisa Marangon in 20km and Rebekah Keat shortly after.  I kept the bike pretty steady throughout and ended up with a good split, seven minutes faster than any of the other women and surprisingly earned me a lead.  I actually thought Rebekah was right behind me the whole time but I guess it was a pro man.

So I had a three minute lead on Rebekah into T2 which should have been plenty to hold her off and for one of the seven kilometer laps I was going fast enough to actually do that.  But then I starting tying up and I started slowing down while she continued accelerating.  I could see when we passed each other that the real estate was shrinking between us.  I ran a 1:26 which might have been enough had she not out run all but two of the pro men with a 1:20 flat.   Very impressive running and she was a deserving champion.  We both crushed the previous course record but she gets to hold the new one with her awesome race.

So overall it was a fabulous trip.  I hung out in Melbourne with my hosts Lucy and Jared and they took me for a bike ride with our buddy Jonesy on Beach Road and a run around the Botanical gardens where a million people do workouts.  I checked out downtown and the Queen Victoria market, the Mornington Peninsula wine region and a bunch of areas of town for shopping including Elwood and Chapel St.  It was such a great experience and I have to say Melbourne has amazing coffee culture.  Anyone from the Pacific Northwest would be impressed. Thank you so much to all of you and to Meg and Luke who I haven’t seen since they lived in Canada for connecting me to the Melbourne crowd.

Now I am home.  Ending the season with a strong performance is awesome.  Last year I ended the season with a terrible race, an SI joint injury and downward momentum.  This year I am strong, healthy and motivated.  I look forward to a solid winter of training to kick off a year focused on Ironman events where I will stubbornly pursue success in that arena. I am not ready to throw in the towel yet.

Thanks for reading and thank you to all of my sponsors for getting me through a stormy two seasons.  I think we can safely say I am back on track with the fastest bike split and course record at three Ironman 70.3 events, four top three performances in 70.3 and some wins in the XTERRA/mountain bike arena.  I look forward to improving on this season next year with a solid winter of training.

Thanks to Adam Zucco and Trainingbible coaching for resurrecting this career.  I don’t think we have actually knocked it out of the park yet but we are at least on track to step up to the plate.  Thank you to Jamie Grimes at Synergy Wellness in Victoria and eSoles, Paraic McGlynn and Wolfgang at Endurance Rehab for getting me off injury roster and back in the game.  Thanks to Nestor at Studeo DNA for optimizing my racing position on the Speed Concept.  Thank you to Trek, Bontrager, Shimano, Polar, Champion System, Powerbar, Blueseventy, Powertap, Frontrunners, Synergy Wellness Victoria, eSoles, Saltstick, Procity Victoria and Wiink2.  I love you all so much and am so fortunate to have the best team behind me.  Here’s to 2014! 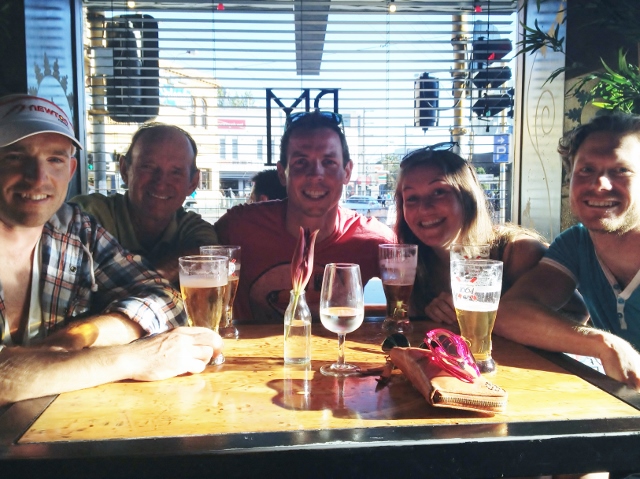 Mates and I check out a pub in St Kilda-Paul, Luke’s dad, Luke, Lucy and Jared 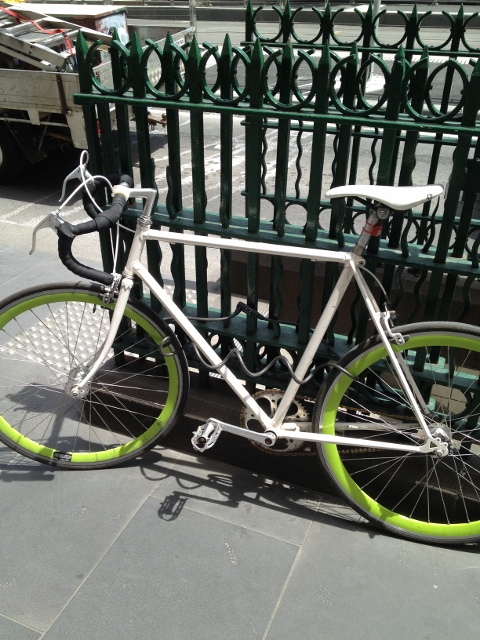 Preferred mode of transport in Melbourne 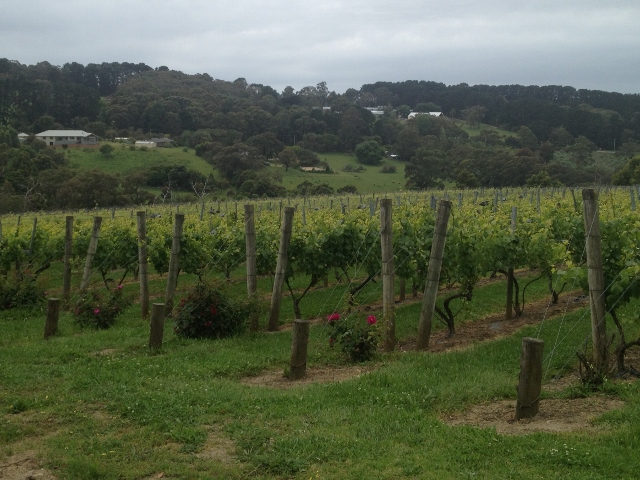 Gorgeous roses at the ends of the rows in the vineyards of Mornington Peninsula. This is Paringa Estate.