This little update is very overdue mostly because I was busy training and not writing.  I managed to pile in a whole lot of miles in my little two week break and that is going to mean one of two things.  From what I have seen this course is flames or glory.  I am hoping to turn down the suck and turn up the rock this weekend.    Not much in between I am afraid.  The course is gnarly even though it is almost 100% uphill so bringing your skills and your big engine is necessary.  For both the run and the bike.  Put it this way.. I nearly crashed RUNNING the UPHILL on the run course.  Chew on that one a little while.

So in preparation for this race I decided to suck it up and train.  Hard.  Conventional wisdom suggests that given my race schedule, lack of a break and general fatigue that a break in training and a rest were in order.  I would agree with that.  However, staring down a hard race that I knew was all climbing meant that I needed some legs.  Legs that I wasn’t sure I had after some unhappy racing on my last trip.  Don’t get me wrong… I raced well given what I had but some of the shine had come off my form and I didn’t want to see how dull I could be if I was not training before this race.

This meant mileage.  A whole pile of a lot of it.  Mostly biking.  I did a ton of running the first week but ended up doing mostly riding the second week.  Scientific recap of exact training details follow if you read more.  The highlight of this training block was very much the group “race” up Hurricane Ridge.  Hurricane Ridge is a 17 mile climb just a puddle jump across the water from Victoria in Port Angeles, WA.  Every year on Canada’s birthday (that is July 1 for the American’s in the audience) a bunch of Canadian cyclists like to celebrate by racing to plant our Canadian flag on the top of Hurricane Ridge in the U.S. of A.   We all board the 6am ferry, start climbing the 5 miles to the ranger station where we take a photo and GO!  12 miles of fun.

No real flag is ever planted but there is a cup where the winning male and female have their names engraved for all future generations to remember their climbing prowess.  This was my third win (I was the only female professional athlete present so “winning” is used in the most loose fashion possible) and Max Plaxton’s second win (holding off a charging Mike Neil) so the mountain goats took the cup.  It was a very fun day complete with Pro City cheerleaders, Team Palmer trying to take me down, Ross taking 15 minutes off his time and Team Rockracing looking fabulous.. which is the most important.  Enjoy the story. 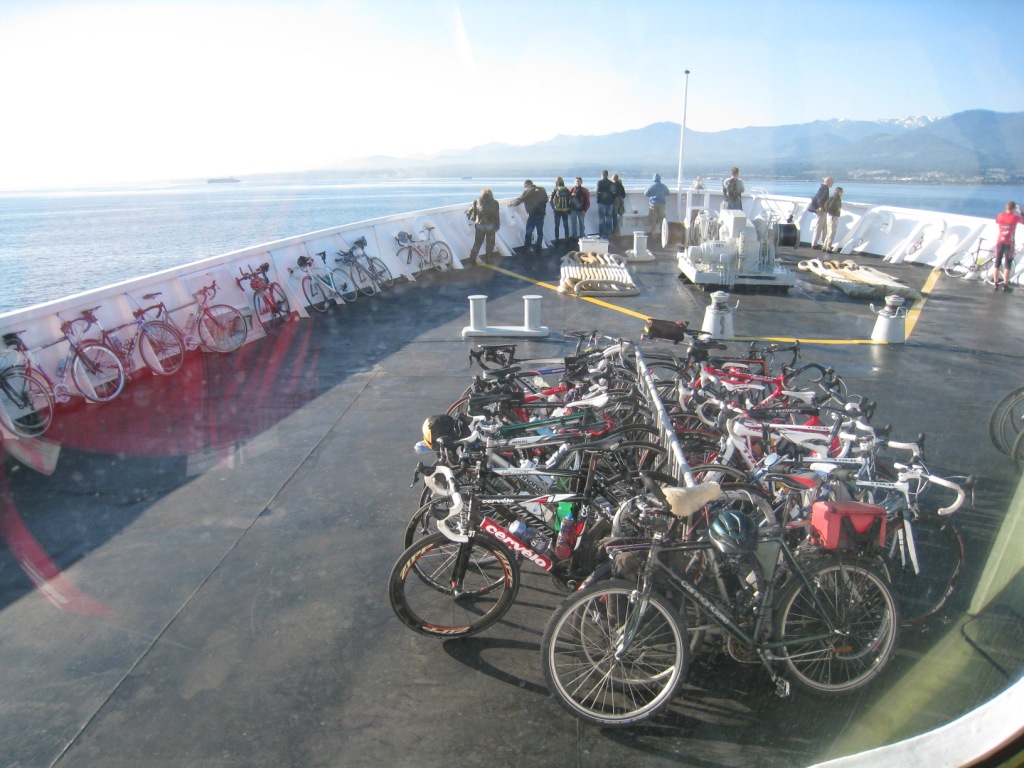 The ferry on race morning with bikes filling racks and sides of the boat.  We counted 94 of them.

Okay Hurricane Ridge always takes me 57 minutes plus minus some change.  So this year was no exception.  The difference this year was I was on my own steam nearly the entire way rather than in a group so staying in the same ballpark was good.  The start of the “race” was also different.  The front pack was tiny and hard to stay in and splintered early.  The boys from OB decided not to race which frankly, is lame.  You guys are lameasses.  The rest of the non-lameasses enjoyed a hard, strung out attack to start the long climb… then aloneness!  Lots of mini packs the whole way up.  I did have company with Aaron but mostly I kept tempo and he would keep me honest.  I was on a mission.  Palmer was trying to domestique for his super fit wife who definitely looked like she was fired up to take the title.  I knew Team Palmer would be strong so there was no looking back.. just hard tempo all the way.  However, Palmer himself decided he at least needed to beat me and left Pam to come after me.  He attacked me at mile 16 and unfortunately I was too slow to respond.  Next time I need a domestique as well.  Taking applications now for next season. 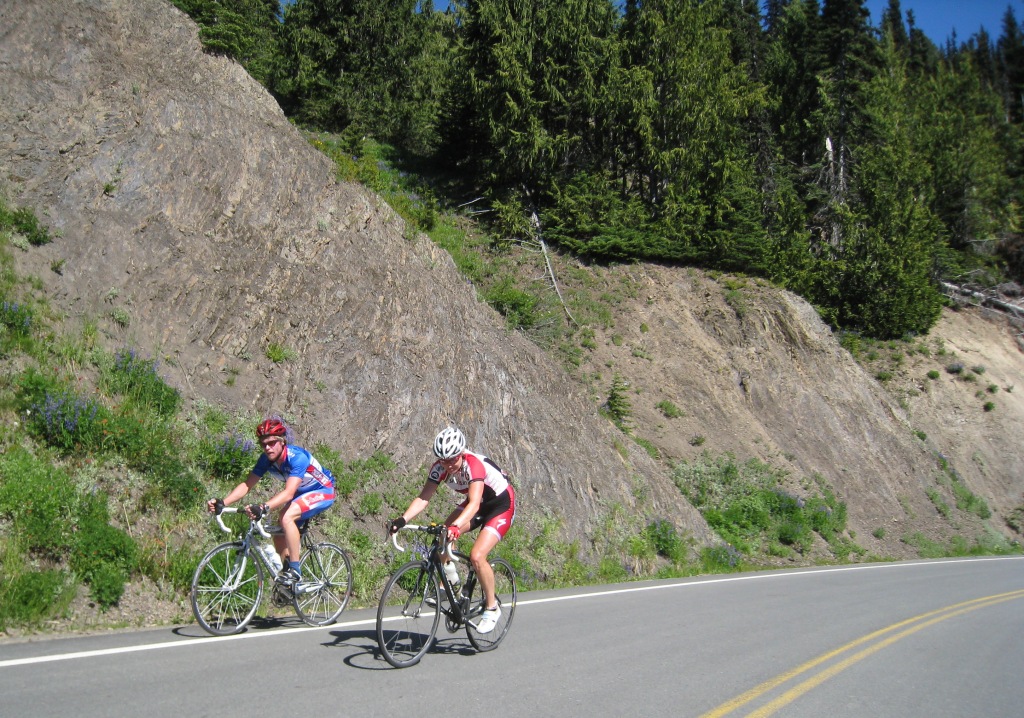 Mel and Aaron suffering for 57 mins

I am sure the gentlemen enjoyed the super fans on course.  Maia and Erinne were the hottest superfan cheerleaders to ever don a ProCity shirt.  I am not sure if any dudes crashed as a result but the beer the ladies had on hand at the top was more than compensation for any distraction they may have caused.  I doubt there ever was, is, or ever will be two more fun chicks who would get up at the crack of dawn to cheer for a non race …. 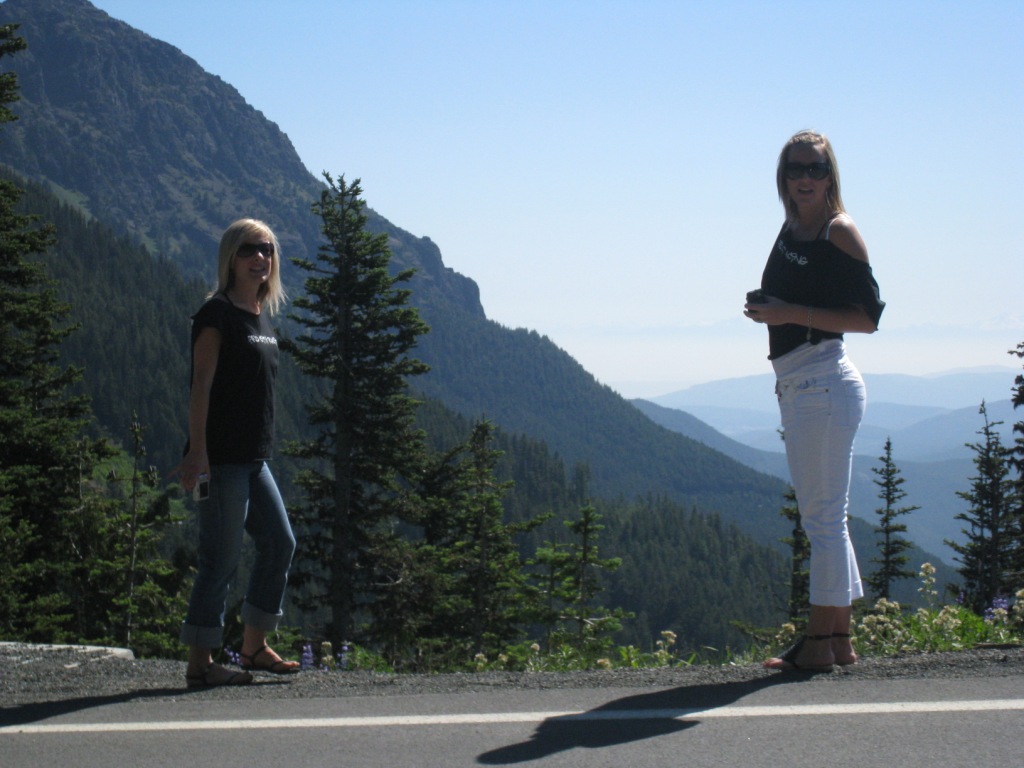 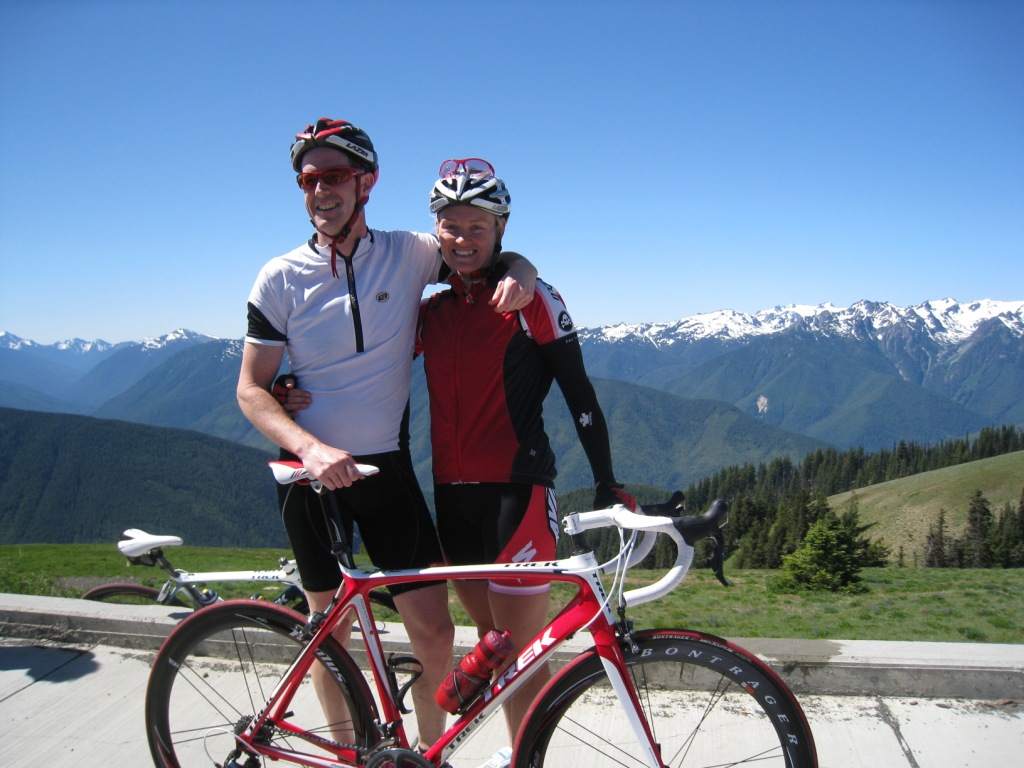 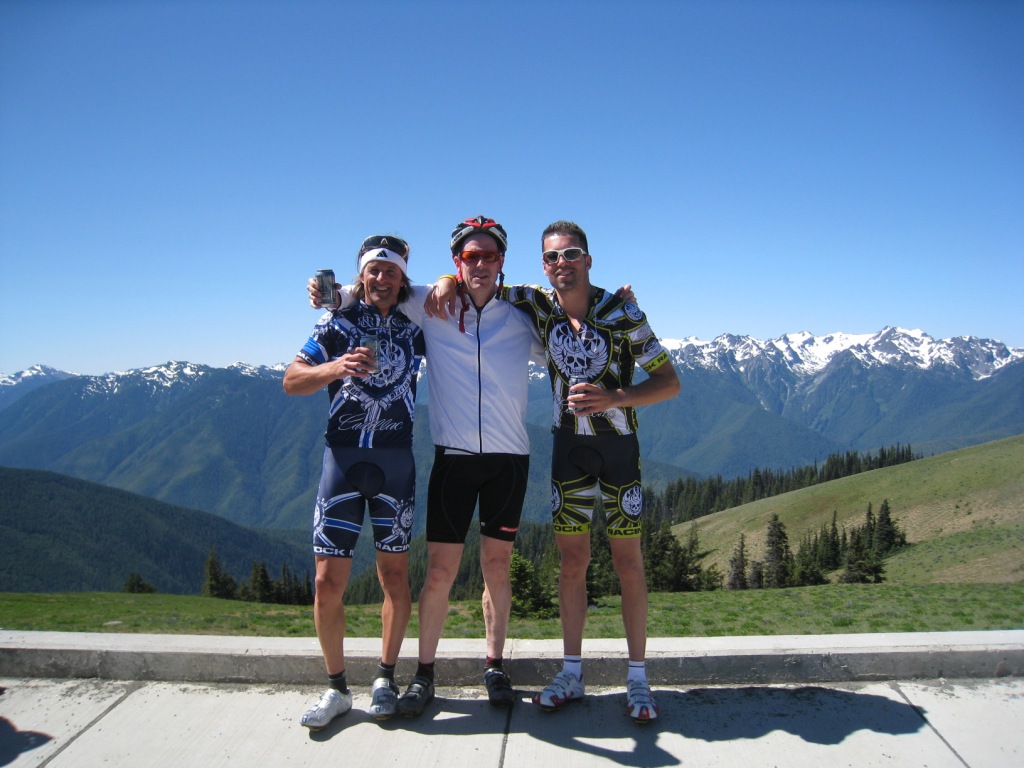 Ross and Team Rock Racing (not really, but kinda)

This training block picks up after the 4.5 epic that Ross and I did in the last post and starts with a long, hilly run on Thursday.  Three lower repeats on Cedar Hill in hot, dusty, dry conditions.  Suitably shelled, I swam 40×50 on :45 before massage and spin.  I then went to swimming on Friday with a 20×100 on 1:30 best average set.  It was not my best average but I was under 1:20s.  Well, not for all of them.  The afternoon I mountain biked for 2h whatever.  Then Saturday was two laps of Shawnigan with 2x up the Goldstream Heights climb.  5.5h mostly because I cracked at about 1.5 hours and sucked it up with Palmer to get it done.  Thank you for being patient, Palmer!  He said he had never seen me so messed.  Finished with a swim.  Then Sunday I did a long run with Palmer and Lisa at Thetis with 2x 12 minutes hilly/hard and 20 minutes hard lap (lake loop plus).  At least I crushed Palmer on the run the next day.  90 minutes of steep uphill as hard as possible.  Monday was an open water swim and an hour spin.  Tuesday started with some band only stuff where I actually swam under 45 seconds LCM.  That is a world record for me.  Then on super crushed band only arms we did the same best average swim as Friday and it was a better average… 1:17-1:18s.  Getting somewhere but I wish I was more consistent.  Consistently faster, haha!  Then I did repeats on the first steep part of Willis Point.  The repeats take anywhere from 95 seconds (fast! for me) to 110seconds (not as fast!) and this week I was in the 105  to 110 range.  Hmmmmm… obviously I have less power.  So I did 10 inside a three hour ride with a hard run off the bike on the treadmill. Wednesday was the shootout on Hurricane Ridge.  I performed solid.. I felt like there was some residual fatigue from training so I wasn’t as snappy as if it were a real race but overall fitness is good.  I was fast.  Thursday started with a five hour odyssey to Jordan River on sore climbing legs.  Hard but necessary.  Followed by an open water swim.  Friday started with Mel swimming the 10×400 set in short course meters around 1000 people at UVic so it wasn’t fast but it was outdoors and sunny and logged so whatever.  5km done.  Then I ran the same hilly loops at Cedar Hill feeling ABSOLUTELY crap, foot not good and still the times weren’t terrible.  Not the best but not awful.  Stupid foot is bugging me.  Easy spin in the afternoon with cadence stuff and more chats with physio and chiro Dr. Day.  Discussions about taping etc.  No action other than more perfect pushups and stretching.

Saturday I did the Wheelers ride and enjoyed some power in my legs staying with the group through the hard hills and along Lands End no problem.  I shut down the hard at 2.5hours and ran off the bike with 5x 3 mins as 1 minute 5% and 9.6 mph and 2 minutes 0% and 10mph with 2 rest.  The first minute is the hard part, the next two minutes are settle into tempo.  On tired legs that is a great set for XTERRA.. obviously at your own paces.  Then Sunday I did the boys ride where Troy, Virgil and Dean kicked my BUTT offroad and Ross later beat me by a country mile in both sprints.  I was struggling (here are my excuses Woodie:  I trained SO much this week, my tires were for mud so too slow, my legs hurt, I have been on my road bike too much, I am only a girl, I ate too little for breakfast, I had too much coffee…

but my real one is you were too fast!!  I want a rematch.  There are no excuses when you are the pro athlete) but after I did that ride with the boys I feel SO good on my bike.  Riding in Victoria is technical.  Riding as hard as you can, effectively at race pace, chasing pro mountain bike rider calibre athletes who wait just long enough for you to know where they are going is awesome training for me.  I am so ready for this muddy mess in Vermont.

This week was a lotta taper.  Like I said… flames or glory.  Either this training block stimulates some power and speed I have been lacking of late or it crushed me more and I need to rest.  I am betting on the former.  Tuesday I did five of the Willis Point repeats in 95 seconds.  Getting somewhere.  As far as race conditions.. no one in this race rides as much in the mud, slippery rocks and heinous roots as I have. Well, the Canadians probably have so I would bet on both Danelle and Christine having a good time here.  Despite my former lack of technical ability as a mountain bike racer I have gathered a lot of singletrack ability now that I am a triathlete (and rarely get to use it).  I am relishing in the mudfest.  We’ll see how it all unfolds on race day.. should be exciting.  The entire cast is present (sans the WC but she’ll be at Nationals so that will be cool) so we’ll see who’s got what then.

Over and out until its over.