I just got back from 2.5 weeks of sunny bliss in Tucson, Arizona.  On the eve of my departure from Victoria for this trip I was still not sure I wanted to go.  I was having such a fun time with Neil’s swim squad and things were going well in that department, the weather wasn’t THAT bad in Victoria and although I felt slow, I was getting the aerobic training in and my final excuse was I just wasn’t ready to start travelling.  However, I am SO glad I went!

The duathlon  result two weeks ago was a surprise for me.  I had put in a hard week of training and I just wasn’t sure if I had any speed at all for racing so to perform pretty well at that race was, well, a happy shock!  I carried some positive momentum into week two of my training block and rode the two hard group Tucson rides on Tuesday and Saturday on the Shiv.  I laughed at myself for being the only one on the group rides on a TT bike the second week.  I am pretty sure if I were on a road bike I would avoid the time trial bike at all costs in a group so I was giggling about whether everyone around me was trying to avoid ME.  Ha!  I was riding pretty well so when I stuck to the front group on the Saturday Shootout I decided to also ride the Madera Canyon addition and after being dragged to the top of that I was stoked to follow Ben Hoffman and Troy Wells for another hour or so to make the total number of rides over 100 miles officially 10 for the year.  Chatting with Ben a bit about what he was doing for training made me more calm about my preparation for Abu Dhabi for sure.  Even Rinny was giving me some advice on how to race in Abu Dhabi at one of the swim practices.  The Ironman pros I have met on this trip were so helpful in helping me get an idea of what I should be doing over there.  Honestly, going into this I was very nervous and unsure of what I could do.

I added number eleven on the Wednesday after when I rode to the top of Mount Lemmon.  From the west side of town that is a bit of a ride and that marks an absolute world record for me in terms of long rides.  I know you Ironman types ride 100 miles seven days a week but for me.. that is a lot of riding. Crazy.  I have to say I prefer to just smash myself for 4-5 hours.  You Ironman types are insane.  Add all the swimming and the running to a program and you have a recipe for an only-training soujourn in the desert.

A nice bike, a nice day and a big cookie is all you need to get yourself to the top of the mountain

Of course a lot of that work was motivated by the fear of racing a 200km bike leg in Abu Dhabi.  Still, there is still no pressure on me for this race.  I am excited to see what I can do there but really, the reward for this work will come later in the year.  I am happier with my time trial position now so I should ride better in my 70.3 events and really, all that aerobic fitness is good for everything.  I am pretty stoked to see what I can do on the road this year.   The challenge and the unknown have been super positive motivators for me for sure!

Tucson is particularly motivating this time of year.  I was happy to join Paulo Sousa’s group for a swim at the University of Arizona and I spent a couple of days in the water with Cliff English’s group.  I even did a super long set with Leanda one day so I had plenty of buddies to train with.  I did most of my running alone but did meet Bec and Sam for a warmup for our long run one day.  It is tough to match programs with people if you aren’t headed to the same races but it was nice to see some people while I was there.

There were some fun nights in Tucson as well including the night I got the gang of allstars together to have dinner at Poca Cosa.  Yes that is a pitcher of margaritas on the table.  We work hard but we aren’t totally obsessed 🙂  I also spent some time in the AVEDA salon downtown getting the best massage and facial ever and checked out some of the cool cafes like BLine and the Times Market.  I did my best to balance out the training obsessiveness with some life enjoyment-ness.  Not too much though. 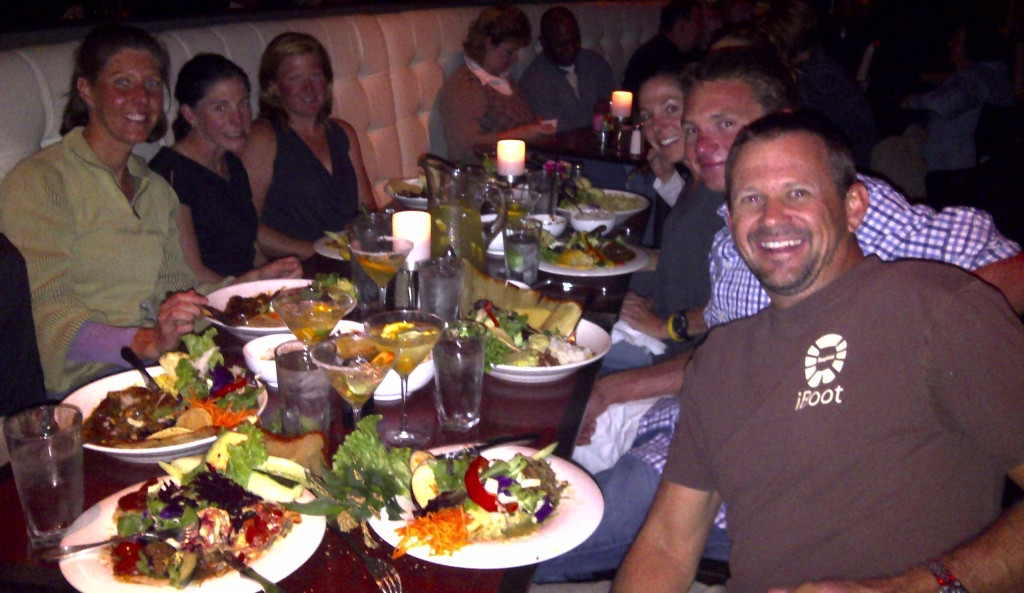 Christine, Bec, Laurel, Sam, Ben and Brian (you can’t see John.. or me behind the blackberry

However I did make a deal with myself when I was down there.  I have six big goals for this year and I wrote them all down and committed to them.   Then I decided to dangle a carrot in front of myself for all of them.  The goals range from seemingly impossible to definitely achievable success.  So I decided to treat myself to the corresponding great to effin amazing Italian according to how big the goal achieved was (it helps that the wine store happened to have an insane collection).   I guess already HAVING the reward is probably cheating but I guess I am just going to count on having some success this year.  I can’t actually open the bottle unless the mission is accomplished.  Can you name these bad boys?   That is what is getting me out there getting it done, what’s going to do it for YOU? 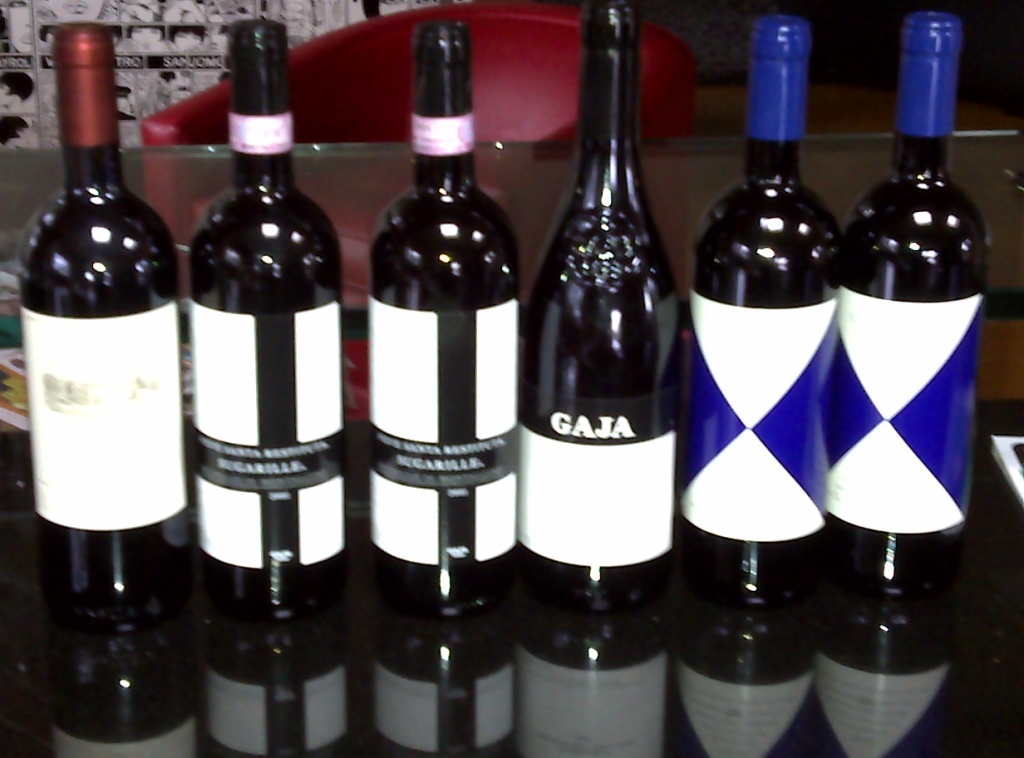 Thanks to my homestay John dropping me at the crack of dawn at the airport on Thursday, I got home relatively painlessly and already today was back at the 6km Neil Harvey zen swim practice at 5:30am.  Back to normal for four days.  Abu Dhabi on Tuesday.  Wish #55 some good luck next week 🙂