Every year the first race of the XTERRA USA Championships season is my birthday week. This year, my birthday was the day before the race and I was lucky to have lots of birthday and good luck wishes to propel me to a win under very trying circumstances. Although I have won a lot of these races it still amazes me how sometimes it is just everything you can do to finish and you just stop thinking about your competition even though you are en route to a great performance. This year the West Championships at Vail Lake in Temecula, California was a classic XTERRA challenge where everything went wrong and Mother Nature threw in her wrath to make it epic and exhilarating to conquer Race #1 in the series. Read on for the story… 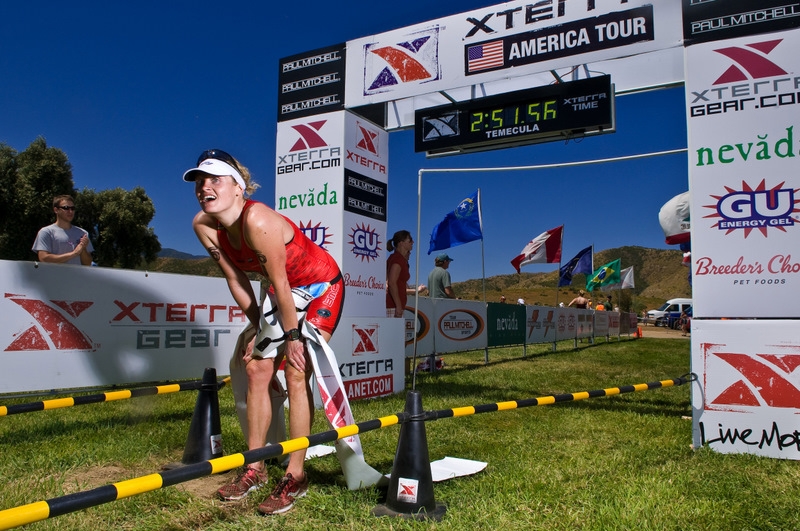 Conrad and I had a chance to visit the LA Tri Club on Tuesday and during that appearance someone asked the question “why XTERRA?”. My answer was that despite the fact we train professionally to be the fittest we could possibly be and take the competitive aspect of this race very seriously, the challenge of XTERRA is often the course itself. Your primary objective is finishing the race and your secondary objective is trying to win it. Sunday was a classic example of the most ridiculously hard race course and stacked fields of triathletes from a variety of backgrounds doing battle against the course first and then with one another.

Temecula is a "participants" race. The venue is kind of out of the way so this was a pure athlete venue with pretty much everyone a racer. Between the 400 trail racers on Saturday and 600 racers on Sunday, there were plenty of people at the venue. But this one is funny because there are the fewest people spectating. I guess it is better to have everyone out there doing it than watching it! All that aside, thanks very much to all the people who were spectating, who gave me the high five and big cheers… appreciated!

We knew it was going to be warm on race day because in the preceding days the thermostat was steadily climbing from about 92 degrees up to a whopping 100 degrees on race day. In fact, in the days before the race Billy and Michael, two boys in Brent and Kim Kay’s family who we stay with, had their lacrosse game cancelled because it was too hot for the guys to play. It was really stinking hot. The water was 74 degrees so no wetsuits for anyone and I got a chance to try my new TYR Tracer over my race suit. We were facing a one lap swim with two turn around buoys (which meant the second one was a LOOONG distance away), two laps on the bike course and two laps on the run. Despite the fact we were starting at 8 am it was still very warm right away and having the swim be non wetsuit and a bit chilly was a nice start to the race.

Everything went fine leading up to the start. Ross was a great pre race organizer and "get your head together" guy so before long I was off to defend my title. I started sprinting on the left side of the field concentrating on swimming behind the lead men when I felt something catch my right arm and twist it around backwards, pulling me under the water in the process. BRUTAL! That person disengaged and carried on but I was honestly a bit rattled by it all so I ended up avoiding close contact to recover. As we approached the first turn buoy I could see the back end of that pack and sprinted to get back in contact only to miss it and end up all alone. Sucky. I swam for about 1100 meters by myself. Cursing my slowness for a few seconds I refocused on my great opportunity to train hard that day, starting a hard race with a hard swim. So I put my head down and gave it everything I had and came out pretty far down on the lead girls. Despite my best efforts I lost over three minutes to the lead WOMEN when normally I come out just over two minutes from the lead men, so that was a complete disaster.

I transitioned reasonably quickly despite the new wrinkle added to T1 where we need to put on our run numbers as a timing chip and went off in hot pursuit of the leaders. I caught Candy Angle in the first mile but I believe she ended up with a DNF that day. I saw Michellie Jones by about mile 3 when I passed her, Linda Gallo was about a mile later and then it took me quite some time to catch the last two speedy swimmers, Chris Jeffries and Lesley Paterson, all of whom are new to the XTERRA tour. I knew that my poor swim plus the unknown of these new competitors’ ability meant I needed to truly throw down on the bike so that I would maximize my advantage going into an incredibly difficult run. I was experimenting with a new strategy… low tire pressure. I rode 24 psi on XTR Tubeless wheels and Maxxis Larson front and Crossmark UST rear tires. Fast. Super good traction and the bumps were totally eliminated… it was awesome. 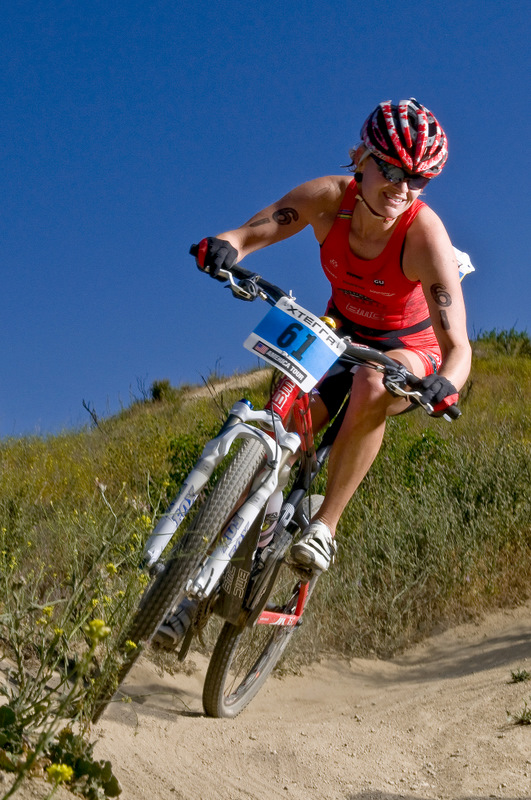 My first lap was fantastic but I had miscalculated the number of feed zones so I only rode with one bottle. This would not have been a problem if I had managed to get a bottle in the feed zone but I took a funky line through some ruts and would have crashed off my bike to take my hands off. Rather than stopping I chose to carry on because I had only just passed Lesley and was not interested in dragging her around half the course (it was largely fire road with a headwind so had she been on my wheel it would have been conceivable that she could have stayed there for some time). So I carried on without a bottle. Shortly after that something stung me on my mouth. So I was feeling funny (probably psychosomatic I am sure) and got dropped by Will and Damian who I was hoping I could stay with along the fire road. I was thinking all weird stuff because I have had some reasonably horrible reactions to bee stings so I was a bit distracted for a while but when I didn’t keel over and die on the climb I decided I would be fine and carried on with racing again. 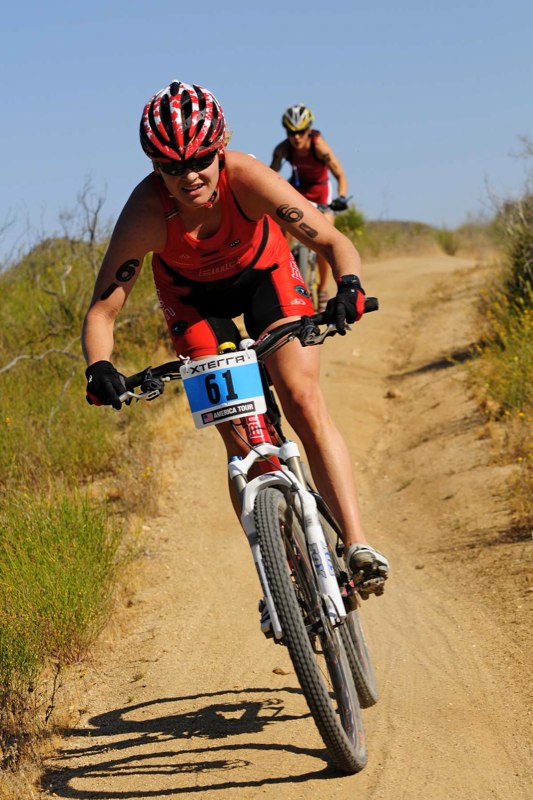 Just passed Lesley on the downhill

The second half of the second lap on the bike was difficult to ride very fast because I began to lap competitors in the race. Despite everyone’s amazing graciousness in letting me pass I really couldn’t ride as fast the second time through so I am sure my competitors and I stayed about the same distance apart. Climbing the last paved road before descending to transition the effects of my missed feed were evident, my legs nearly seized with a cramp (never happens to me!) and I was feeling AWFUL. So I coasted to transition shaking my legs out and grabbed my start bottle in transition to finish it while I ran out (it was about 100 degrees as well but was liquid) and focused on FINISHING!

My legs were not heavy but my body didn’t feel good. I think I was running fairly well for how bad I felt and as soon as I went through the first run feed and poured freezing cold water on my head I felt better. In fact, as the run went on and I poured more water on me I was feeling better and better so by the end of the run I think I was feeling stronger than when I started but I had run very conservatively throughout. Probably just bringing down my body temperature was bringing me back to life.

It was great to kick off the season with a win on a race course that, on paper, doesn’t really suit me. It didn’t really show as I still took fastest bike split and a satisfying victory. On her first race as a pro, Marion Summerer had a fantastic performance finishing under two minutes behind me for her first podium after winning the overall amateur World Championships last season. Jenny Tobin showed great run form and overall fitness to take third with Danelle scoring fourth place and a podium on her comeback as a mom and Amber Monforte building on last season to score her first pro podium of the year as well. Chris Jeffries took sixth in her first XTERRA after switching from ITU so looks like I will have some more Canadian company on the scene. It was really great to have Michellie Jones come out for fun to give our sport a try and her 10th place finish really underlined the speed and skill of the field of women who work so hard to be great at XTERRA. I am sure all of us really admire Michellie’s accomplishments and I personally breathed a sigh of relief when I managed to solidly defend my territory on the weekend!

Congratulations to my new rival Conrad Stoltz who also won the men’s race in dominant fashion. Dan Hugo from RSA took second, Brian Smith ran to third, Josiah Middaugh took fourth and Seth Wealing rounded the podium in fifth. Conrad and I are going to race to see who can be first to win their fourth World title while trying to scoop a few other titles along the way. So he has become my added motivation… must perform as well as Conrad! Of course he pointed out to me that if we both win this year he would still be first to four titles because he would cross the line in front of me… cheeky monkey!

Thank you very much to the Kay family for their awesome hospitality and the very thoughtful birthday gifts! Thanks for the pre race warm up ride Brent, thank you for not killing me and my confidence pre race

. Thanks to Ross for showing up for my birthday and being #1 support guy every day!

Thank you goes to my 2008 sponsors who have been loyal and supportive through many good and bad days and I love them all. Thanks to BMC bicycles, Quality Bike Products, Nature’s Path foods, Shimano cycling components, wheels and shoes, Maxxis tires, Sundog Eyewear, Saucony shoes, Titec and Profile Design wetsuits, Gu Sports (Roctane and Gu2O), Fox Racing Shocks, Lazer Helmets, Saris/Powertap, Pactimo custom clothing, Fizik saddles, USANA vitamins, SciCon bags, and Genuine Innovations inflators. This is a DREAM TEAM of sponsors that I am sure is giving me an advantage over my competition and I am so grateful to have them on board again for a super fantastic season.

Congratulations to all those who finished XTERRA West Championships… that in itself is truly outstanding. I look forward to hearing some stories from you guys and especially the story of the LA Tri Club free entry winners who came out on Sunday!

And lastly, Jamie, we already miss you on the podium! No matter the challenge right now I am sure you are going to continue to motivate and inspire all of those around you with your fiery spirit and positive attitude! 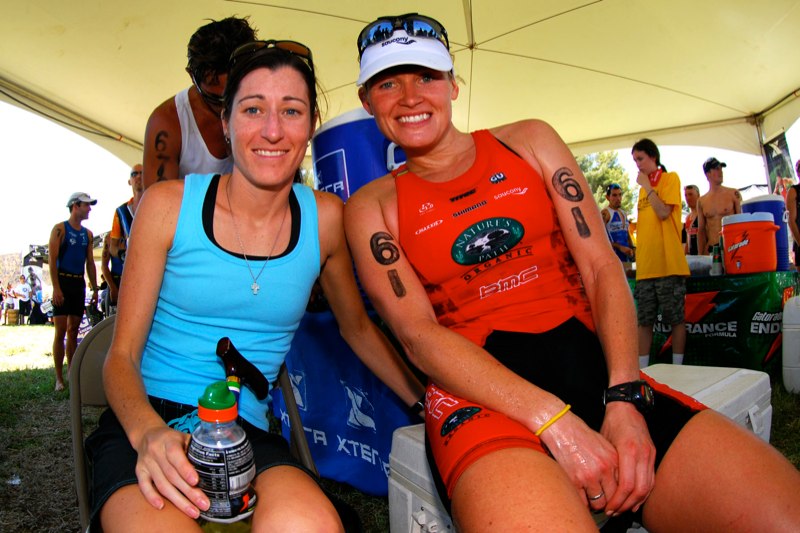 So bring on the Southeastern Champs in Alabama… I am ready!