I picked up a new mantra while I was in Alabama: “If I got it…they’re gonna get it!”.  Love that, thanks Dianne!

The race in Alabama went almost as close to perfectly as I could ask for.  The second half of the bike course my shifter cables gave up due to an overload of wet conditions and sand but really, it was an inconvenience causing me a few seconds and some grief rather than any meaningful problems.  I put together the fastest swim by two minutes (thanks to Christine Jeffrey’s absence), the fastest bike by a minute to give myself a solid lead off the bike.  I then used my lead to gingerly tiptoe down the sketchy downhills on the run course enroute to winning the Southeast Cup Race in Pelham, Alabama this week (solidly outsplit by second place Lesley Paterson on the run, not surprising).

I put together a race that Steve Larsen would approve of with Conrad and I winning our races with the fastest bike splits.  I had a good swim, threw the smackdown on the bike on the Maxxis Larsen TT outsplitting the next fastest athlete on the bike by a minute and then ran it in.  With heavy hearts we had a moment of silence before the start for this incredible athlete who at 39 years old is gone far too soon.  Steve, the sport of XTERRA and all of us who hope to be as influential and gracious as you were will miss you a lot.

This is my third win in three starts this year… not a bad opener?  The podium included Lesley Paterson in second, followed by Renata Bucher, Shonny V and podium newcomer, Emma Garrard who is a newbie pro rocketing up the ranks.  Read on for more….

The race in Alabama is highlighted by the hospitality and friendliness of the people in the Birmingham area.  A big shout out this weekend goes to my four-peat homestay family Mark and Dianne Jacobs who rock the house.  The two of them volunteered to take in myself (which is a big ask) and then kicked it up a notch to offer Renata and Jim a place to stay (two wonderful athletes that are super fun to hang out with).  Coming to Mallard Lake to hang out with the doggies, the snake, the turtles, the swans and the duckies is a highlight for my season.  This year I actually swam in that lake with the critters (hmmm, I had a good swim this year as well…) and really took in the beauty and calm of the woods here in Alabama.  If you have never visited Birmingham to hang out and ride mountain bikes you are truly missing out.  Oak Mountain Park has been transformed into a mountain biking mecca with fun rooty, twisty, rolling trails, a kickass bike wash and a big, clean lake to dip into when you have finished your 19 mile loop.  This race venue is really great.

For how much I like the venue I have not had the results here that I would have preferred to list on my resume.  The main reason is the weather.  The past two years in Alabama we faced 100 degree temperatures and I did some downright stupid things pre race.  Last year took the cake for stupidity and I ended up walking the run.  This year, I was not so silly but I also had the benefit of high 70s temperatures to keep my cool and go a LOT faster.  In fact, the race was wetsuit-legal for amateur racers because the cool weather this spring kept the lake at a brisk 71 degrees.

The week leading up to this race was short because we raced last Sunday and would be racing on a Saturday.  The plan was essentially to try to recover but still stay sharp enough to race well.  Most of the field was in Michigan last week but the two super runners, Lesley and Danelle, had skipped last weekend and would be expected to be very fast and fresh.  The Alabama course suits me well up until the last three kilometers of the run.  We usually have non-wetsuit swims, a technical mountain bike course with a reasonable climb in it and then a long run course that starts out flat, fast and twisty and then becomes a hellish experience of vertical climbs of about 2-3 minutes followed by equally vertical technical descents which I do not fancy.  So up until the last three kilometers I love this course and then I curse it until the finish.

After good training during the week including a fun track session in Vestavia Hills with some good ol’boys and Johnny, the Alabama Ironman, I was feeling strong.  Of course, I was 100% paranoid because I have felt strong, confident, blah blah and still blown this race in the past.  My main objective was to maintain my paranoia at a manageable level so I didn’t do something stupid again.  I hung out by the lake the morning of the race finding calmness and arrived to the swim start relaxed and ready.

When the gun went off I sprinted my heart out.  I was going to swim with the boys.  I was fast, likely because I was wearing one of the kickass TYR Sayonara speedsuits.  I could see the very, very front right in front of me but decided to settle in with Josiah because I really didn’t think I would make it all the way to the front with Conrad.  However, I SAW the group this time not too far in front at the first buoy… and maybe next time will be different and I will be part of it.  Josiah and I had a good swim as the age group athletes overtook us by the end of the first lap (in their wetsuits) which meant for the first time we actually formed a pack rather than being stuck all alone in no man’s land between the super fast swimmers at the front and the pack of swimmers that are usually behind us.  We really only lost a minute to the main group and another 30 seconds to Craig Evans to kicked ass and came out of the water solo way out in front. 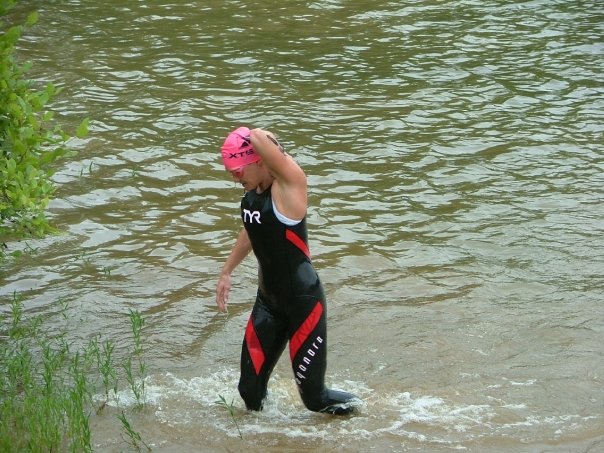 Still last in my group to come out but best swim this year…nice suit huh?

Onto the bike I had a few more men than usual to ride with because of the wetsuit advantage.  I managed to ride most of the bike course with Casey Fannin, a super fast local boy, which made the time go by very quickly and kept me focused.  This week I rode the Sundog Triathlon glass with the clear lenses and I think that was a good call for such an early morning start.   Not much to report on the bike – I pedaled hard, I cornered fast and I came into T2 in first.  Mission accomplished!  The bike course was much rockier than it has been in the past because of significant rain so I may have made an error in bike choice.  I rode the S-Works Stumpjumper hardtail which I would not do again.  I would have been much more comfortable on my Specialized Era but I gotta ride what I brung!

Out onto the run I nailed the first five kilometers fast in my comfy AVIAs.  In fact, I was told my lead extended in the first half of the run and then it was whittled away as Lesley rocketed up the climbs in the second half.  I didn’t even look at the run course, preferring to try to stay fresh, and thus sections like the river crossing and some sketchy downhills required me to walk a little in order to be 100% sure of my footing.  That meant very slow going for those sections.  However, I ran well for most of the rest of it so I still came into the finish with a significant lead and enjoyed my third win of the year.  I ended up racing the run with Casey as well and being the Southern gentleman he is, he slowed up and let me run through the finish line in front of him to take the tape.  Thanks Casey!

Thank you so much to all my sponsors for making this happen.  I really have a lot of advantages being supported by these companies that is showing now in my results.  Thanks again to the local organizers in Pelham for such a well run event, thank you to Mark, Dianne, Pettus and Virginia for letting the pile of pros invade your home and thanks to everyone reading for their cheering via the internet.  You are all the best!  And lastly, good job Nat Grew and Errol Lassiter. I hope to be able to do battle at XTERRA when I am in the 70-98 age category.  You two are awesome!

Home now until the next event in Coeur d’Alene Idaho.  Giddy up!