I then hopped on a shuttle to get to QBP headquarters, where the Frostbike festivities were happening. Frostbike is a tradeshow showcasing all of the vendors that QBP distributes. It is NOT a small show… it is like a mini-Interbike show. Of course, all the cool kids were there. BMC, Saris, Shimano, Maxxis, Titec, Profile, Fizik, Fox Racing Shox, Lazer, does any of this sound familiar? Yes, nearly every sponsor I have is a QBP vendor and this was before I started working with QBP. It is a relationship that was meant to be, really. Anyhow, visiting BMC at Frostbike is also an opportunity to visit with some of my other sponsors and their sales people. A family reunion of sorts.

The first day was the most nerve wracking. I had a photoshoot in the afternoon in my new uniform from Pactimo and then I was speaking that evening to the QBP dealers. I was most nervous about that. I mean, when I speak to a corporate group it is unlikely I will ever see anyone again but this group would certainly contain people I would end up seeing again. Particularly if I bombed it, ha!

I think it went well. Either that or the entire group was hugely charitable. I have totally bombed before and someone always tells me so and no one said I sucked, so yay for that. I was given a bottle of Bollinger Pinot Noir as a gift from Scott for doing the speech which was super cool and interesting… and I will be carrying it to Bermuda and back to Canada so it will have travelled from France, to Minnesota, to Bermuda to Canada. A worldly wine now! Just like 007 (Scott informed me that James Bond is famous for preferring Bollinger champagne).
Saturday involved spending time in the booth visiting with dealers followed by a fondue party in the BMC booth complete with Swiss cheese and sparkling wine. They do it up right at BMC. I had a chance to see the super cool new ad Saris has come up with for the new mountain bike Powertap hub (on my site now!) and I visited with a few sponsors. Saturday night was a group dinner and then a reasonably early to bed time. Well, it would have been had we not gone to the hotel bar for one more drink (I had two, but they were cranberry sodas!) and we shared some more stories with my Swiss bosses. In particular, Peter cracked me up regularly. Maybe it was because he spent so much time in Holland but I found his sense of humor great… my Dutch heritage must come out at some point.
A highlight was hauling my new Pro Machine SL01 out of there… so excited. I chose a red and black one again since this year it will match my uniform. There is a definite difference this season in the new frame, particularly in lateral stiffness. Good stuff.

Of course, when I was supposed to leave at 11 the next morning, I discovered my flight had been cancelled. Instead, I left at 6pm and spent most of the day doing a lot of nothing. I arrived into Toronto at 11pm and had to fly out at 8:25 am the next morning. YUCK! I had about an hour to visit with my friends Chris and Sascha before Ross and I were up again at the crack of dawn to leave again. We nearly missed our flight but that is the next story… Bermuda! Stay tuned… 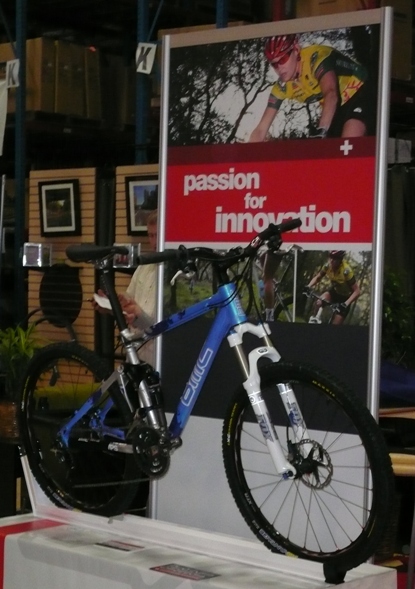