Well the race didn’t go how I had hoped but unfortunately it did go somewhat as expected. This was a low priority event that I placed in my schedule for "training", while many mountain bike girls use these NMBS events as key events for points. The difference is obvious when you look at what I was capable of doing this early in the season and some of the amazing form being displayed by the other girls right now. My New Year’s Resolution was to enjoy every race, good ones and bad ones, so I will never again take for granted what I am so fortunate to be doing. So without further ado, here is the story of my first races of the season…. 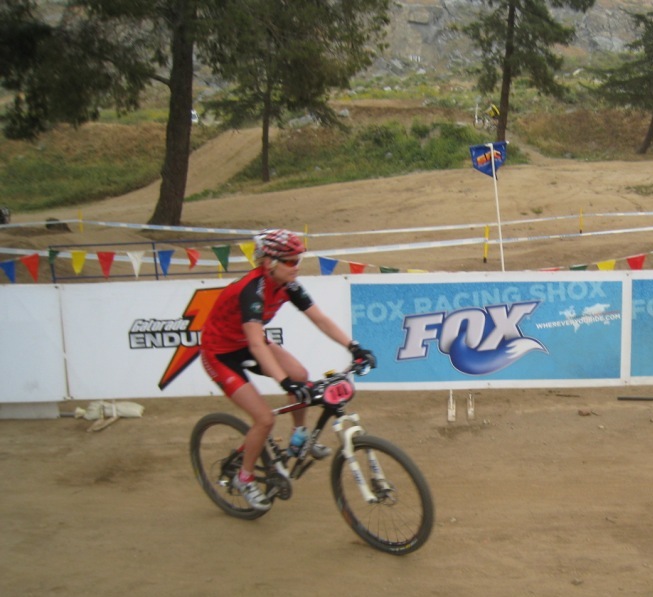 This is the list of what I gained from the weekend:

1. Some needed speedwork (the race was my first day of speed this year)

2. A crash (they say all cyclists are those who have crashed or those who are going to)

3. A flat tire (bad luck must come some time)

4. A super cool number plate. The NMBS numbers look like little moto numbers and are very cool plus the girls get pink ones.

5. Some time in the sun riding my bike as hard as I can.

6. A better start position for next weekend… at least in the cross country since I have a 20th now.

7. Practice pacing myself. Unfortunately, it was very true to XTERRA style since I was ALONE out there!

8. Some fast single track on terrain similar to Temecula.

I knew that the mountain bike girls would be starting this season VERY fast because the Olympic qualifying events start in three weeks. Given that the first race I really need to be fast for is still two months away and my key race is SEVEN months away, this race was far from a priority.

Still, I like being fast. I wasn’t this weekend. In the cross country I had a reasonable start but instantly knew I was in trouble. It felt like I had a governer so I could only go up to a certain speed but the field was going faster. I would yo-yo off the back of the front fifteen, catching up on the descents but dropping on the climbs. That is, until I was descending like a maniac to catch back up again on the descent and stacked it. That wasn’t that fun. I was really getting frustrated (unnecessarily, I might add) so on the third lap I was pretty despondent and dropped to 19th. Then I woke up again only to be passed by one more person but I did ride the last lap a minute faster. Should have been more like three minutes faster but I finished and it was done.

I felt quite a bit better the morning of the short track. My legs didn’t hurt like they did on Friday so I thought it would be a good day. In fact, my MOOD for the short track was much better. Probably because I am not bad at short tracks.. it helps to be a little bit good at something to feel positive about it. However, that too was not to be given I did one lap (good position after my one lap) and then a flat. DANGIT!! A huge steel nail or something went right through my tire. My new Maxxis Monorail was done.

Congratulations to Georgia Gould for winning the first race of the season and her Luna teammate Katerina Nash for taking second. Then it was all Canadians with Wendy Simms, Catherine Pendrel and Emily Batty rocking up 3-5th to finish off the podium. Nice work! Of note for XTERRA fans was Shonny Vanlandingham in 13th for the XC and Danelle Kabush bearing down on me in 23rd in the XC.

Thanks to all the XTERRA fans who said hello this weekend! It is cool to see that lots of us mix it up a little. And lastly, a shoutout to Jamie who just finished surgery this weekend. The mountain bike crowd was talking about you this weekend and they look forward to having you back as well.

Talk next week after our next adventure in Phoenix, Arizona.