Well, I am happy to say I finished my first half-Ironman this weekend at Vineman in Sonoma, California. In the end that was what it was… finishing, rather than racing. Not quitting my day job at this point. Note to self: four weeks was not enough time for me to feel strong for 90km in aero position on my BMC given that is as far away from my position on a mountain bike as is humanly possible. Race in a nutshell: crap swim, okay for the first 40 km of the bike (although not feeling great since it was f-f-f-freezing out), got shelled on the flat sections of the bike course, cruised the run to finish sixth. Despite the super fantastic BMC TT02 bike, perfect bike fit from Bill at ProCity Cycle and perfect mechanical operation care of Troy, my legs prefer pedaling with my body upright, not all leaned over. I was so happy to see any hill on the course, especially Chalk Hill, since it gave me some respite from massive butt cramps. Ouch. I just rode to the finish as best I could and then ran cruisy to the finish…. offering encouragement to everyone as I watched the out and back foot race unfold in front of me. Ross essentially coaxed me into finishing (he and Cliff chased the race in the car giving me splits and encouragement the whole way – I can be a real baby when I am not racing to win) and in the end I am super happy I did. I was not sure what to expect going into the race but since nearly all of the girls who beat me have won a half Ironman before and have half-Iron wins this season, so for my rookie attempt I guess it wasn’t too crappy. At the end of the day, it really wasn’t that hard (I didn’t really go "to the well" on this one) and this was a good test event to see what I need to do next time. Our weekend was a lot of fun so read on for the latest installment of Mel’s excellent adventures…. 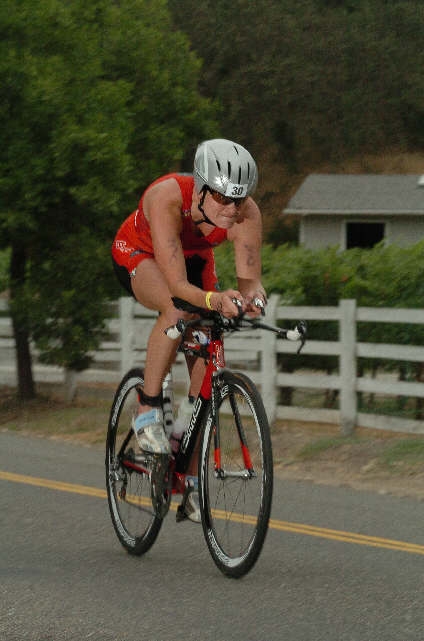 Fun times on the BMC TT02 at Vineman photo by Photochambers

I flew down to San Francisco on Friday afternoon, drove for WAY too long to get to Santa Rosa (traffic was a nightmare) and met up with Scott from BMC at Steve’s store in Sebastopol – West County Revolution. There I got my bike built and tweaked for race day and we arranged for Ross to get a bike the next day. We had a nice dinner at Riviera then headed to our home for the weekend with Lisa, Mark, Stuart and Nate on Crane Canyon road. What a sweet house! This was yet another super cool homestay family with whom Ross and I have tons in common and hope to have come and visit us in Victoria. Good karma for the weekend!

The next day Ross and I went out to the start of the race course and rode a bit. The riding was a waste of time because really, a road is a road, but I did get a chance to hop in the water and we got some idea of where the course went. Then we drove to the high school in Windsor to get my registration and go to the pro meeting. I had a chance to catch up with some of the road athletes that I never see like Sam McGlone and her fiancée Cliff , who has given me tons of run advice in the past. I also ran into my sponsors Holly from Gu and Carrie from Saucony so all in all, a fun day. 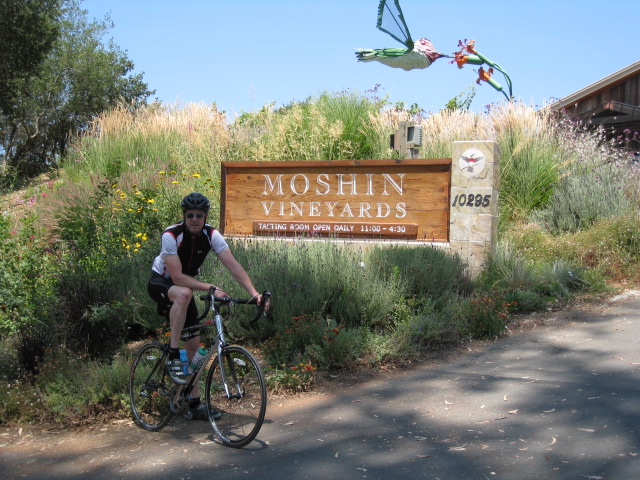 Ross by one of the hundreds of vineyards on course

Sunday morning was an early wake up call. The race started at dark-thirty so I was up after four am, which apparently is not even early enough. We packed up and left and it was pitch black for nearly the whole drive out. When we were about four miles from the start I jumped out to warm up on the bike and rode to transition. I was cold in my trisuit, legwarmers, jacket, jersey and long fingered gloves!
Our racks were at the far end of transition and with 2,000 people sorting themselves out in there it was not a quick trip. By the time I figured out my rack spot, got dressed, got my goggles, blah blah I was running to the start as they yelled for all pro athletes to be lined up in the water. I was still zipping up my Goldcell wetsuit and hadn’t finished putting my cap on when there was a thirty second countdown so essentially I swam straight into the back of a starting pack. Boom, off I go…stupid early races.

I had an absolutely terrible swim. Just crap. My cap kept falling off so I was taking swipes at my head to keep it on and I really wanted to stop to pull my wetsuit on more. I don’t recommend that late a start. 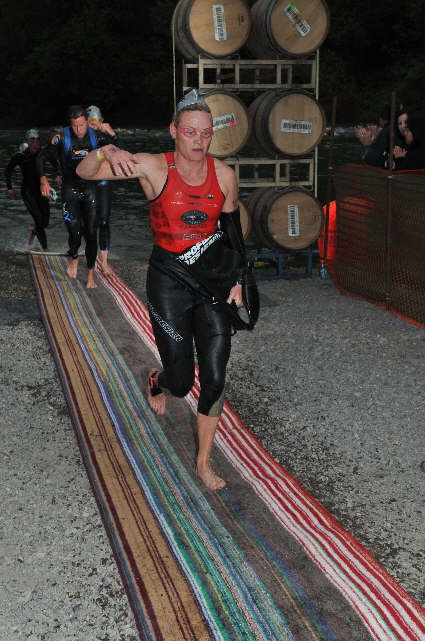 Swim exit – notice it is still dark and my smurfy cap

So when I got out of the water I was already a minute down from Sam and Kate Major who were the people I was planning to try to stay with. I totally baffed the “get on your bike” phase of transition since we start up a hill. I lost a lot of time there but I finally got on and got moving. I was cold… really cold. It was foggy, dark, misty, chilly and cold. Not what I prefer to race in. My legs were cold the whole way on the bike which doesn’t make me perform at my best . Despite that I was moving okay through the first hilly phase of the bike. I like hills. I got within sight of Kate, I think I was fifteen seconds back but not long after we turned onto a flat road where she promptly started riding away. That was also where I ran out of any power. I have about an hour’s worth of power in the muscles required for aero position. I ended up standing up a lot because my legs were cramping and I was really uncomfortable. So then I started worrying about an injury.

As soon as I started questioning why I was there, I slowed down. You can’t go your hardest when you are questioning yourself so I spent about half of the bike leg waffling between, should I drop out and save it for the next race or just get it done? Ross was adamant that I stick it out and go my hardest and I could see him being frustrated with me because he was saying “They are RIGHT THERE… GET GOING!!” Of course, I couldn’t get going because my legs weren’t working but I hate dropping out so I thought I would just get through the bike and get to transition.

When I got there I figured I at least needed a brick workout so I asked Ross to meet me at the La Crema winery where I was going to jump in the car (halfway). I ran cruisy along the road, cracking jokes with Ross and generally being completely unconcerned with the outcome of the race because I had no intention of finishing. Ross would yell something funny at me and give splits to the other girls which made it obvious I was not going to win any money or be caught so there wasn’t much to really run hard for. We just had fun with it and he yelled things like “You look like shit!” which made me laugh. It was like having Ross out at Elk Lake with me on a training run. However, when I got to the winery I had to run around it and back since Ross couldn’t park in there so when I got back to him I was already at eight miles. So I figured, what is another five miles at this pace? I wasn’t hurting and I was having fun yelling encouragement at people I recognized in the endless stream of people running in front of me and behind us (it is out and back) so I just ran it in and finished sixth, six minutes out of the top five, eleven minutes off of first place but another seven minutes in front of seventh so fully in no man’s land all by myself. The top five were pretty close with Joanna Zeiger in first, Tyler Stewart second, Sam McGlone third, Kate Major in fourth and Alexis Smith in fifth. 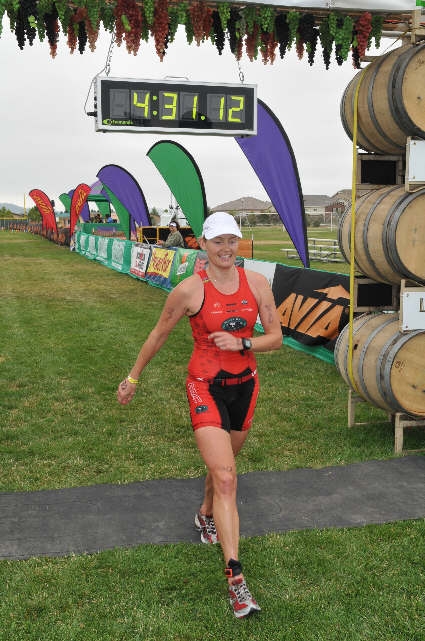 Happy to be done photo by Photochambers

I was outsplit by everyone in front of me on pretty much every leg of the race (except for Tyler Stewart who recovered from a slow swim with a bike split that crushed everyone else’s) but for what was a good training day rather than a hard racing day, I wasn’t that far out the back. I think there is some hope in the future for me at this distance but it will require more time on the time trial bike. I do think that I will be back at 70.3, maybe next time with a bit more preparation time behind me. Unfortunately, that is time that I do not have right now. So, I am back to mountain biking starting with a brutal XTERRA at 9,800 feet in Crested Butte, Colorado this weekend. Let the altitude phase begin!

Thanks to Dave and Amy LaTourette for welcoming me to my first 70.3 event at Vineman and thank you to the super fantastic women’s field for showing me how it is done! Thanks to the Young family for their welcoming hospitality and witty banter all weekend and thank you to all of my sponsors for being so fantastic and encouraging when I wanted to try something new. I gotta say… I have a bug now. That performance was not good enough so it will certainly not be my last. And lastly, thank you to Sonoma for creating wonderful red wines, one of which I plan to enjoy with a Vancouver Island ribeye steak this evening…