This past week I decided to do a big focus on cycling to boost my endurance on the bike before we get to Maui. In the winter I do a week like this every four to five weeks to push my base higher before the season starts but generally when we get into the season devoting 20 plus hours to just cycling doesn’t happen. Since I have a solid break before I go back to Tahoe to acclimate I have time for not only a week like this past week but also another week to spend working very hard on a more balanced program with some high volume. This week I did five hours of swimming (corresponds to 19 km of swimming), 23 hours on the bike and a tiny 30 minute run (plus a 1.5h run/hike with Ross that I am not sure how to quantify so it did not go in the training log). For me, given that every swim was quality, two of the rides were HARD and I finished the week with a HARD race, this is probably the best quality volume week I have ever had. Now the key is to recover from it… 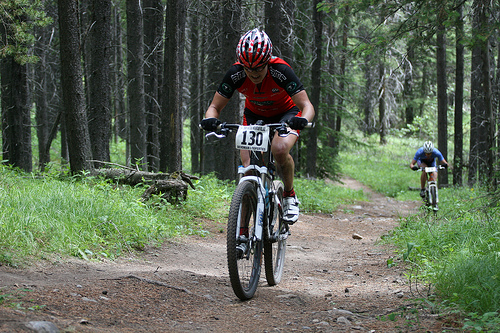 This picture is from Canmore, not Mt Washington but Ross didn’t take any photos this weekend so….

I came back from Ogden very tired but very fit. Taking the six days off was a good idea. By Saturday I finally hopped on my bike to go do the group ride but all the time off meant I was flat and feeling kind of terrible whenever the group would have someone attack. The short, punchy attacks were killing me! This was probably an after effect of three and a half weeks at altitude – a certain amount of detraining in my high end power. So yeah, dropped from the first group and when I turned around to join another group heading in the opposite direction? Yep, dropped by them too. Then I got a flat tire. Saturday sucked.

Sunday I went for a wonderful and social run with some girls from the UVIC running team and 90 minutes and 20km later I realized how much my running has improved. Now 4:30/km really is low end aerobic base for me. I started the year running probably 5:00/km. So that is good news for me and good news for my runs off the bike! So after the cruisy run I did an easy spin with Ross and made my fancy dinner… but that is my last POST so onto this week..

Monday was a solid swim with some efforts and a two hour aerobic ride for volume. The swim I did was 4.5 km main set 20×100 on 1:30 best average for a very average average but whatever, JFT. Ross rode with me and we took our mountain bikes on an urban/trail assault.

Tuesday was another solid effort swim, more solid times than Monday, with 4.8 km and main set 10×200 6 swim and 4 paddles. That day I rode the Hour of Power loop within seconds of my best average pace without my heart rate getting anywhere near max. I think I was still a little flat to get right up to race pace without some competition around. It was good hill training and great descending practice and another 3.5 hours on the bike with about 50 minutes of hard effort. I finished the day with core and strength work for 30 minutes.

Wednesday Erinne Willock, Brent McMahon, Trevor Connor, Megan Rathwell and I went to Jordan River. Jordan River is a very hilly 150km ride along the West coast through Sooke. The weather was atrocious but since we had a group of serious athletes it was never suggested to turn around, which is why there are so many good athletes in Victoria. It was a solid, solid day with the highlights being Brent is riding awesome and apparently I am riding pretty good too. I finished the 5h on the bike with a thirty minute run off and after lying unconscious for a few hours did some yoga and stretching.

Thursday started with a 4.5 km swim with 3×800 m negative split and descending one to three. Two pull, one free. That was a pretty good set for me actually. Then I went to ride out to Shawnigan with Erinne only to be stung inside my lip by something. Within 10 minutes my face had doubled in size. Erinne and I rode straight to emergency but after sitting there for an hour I told Erinne to go ride and after an hour and a half I still hadn’t died or seen a doctor so I left as well and went to Shawnigan with my fat face. I rode the steep way, taking Munn road and Finlayson arm and on the climb on the way out of Shawnigan my seatpost slipped so my seat was pointing straight up. DAMN stupid Thursday! I got the climb done and rode most of the way home like that. In Langford on my way into town I asked someone for a multitool (turns out he’s on my facebook list but I wouldn’t have known that I know him but thanks David!) but another couple minutes later and it had slipped again. My back was sore when I was home but 4.5hours were done and logged. After some food and stretching it got better but my face did not. I was an alien in a fat suit.

Friday was only volume without intensity on the bike so I did an easy 2.5hours on the road and a 4.5 km swim with a bunch of “speed”. After a week of riding my legs were pretty dead but I did 2 sets of 3×100 fast, 200pace, 2×100 fast, 100pace, 100 fast 2x50pace on 1:30 base. My “fast” was 1:16 and my pace average was 1:19. Go figure. Anyways.. at least I am swimming around the 20 minute-ish mark. I should be able to swim 19 minutes by Hawaii, which is the goal but for now 20 minutes is better than 21 minutes. We had dinner plans with friend Paul, Lisa, Brent and Carolyn and I had to go with my fatass face. Carolyn said she could hardly notice, bitch! Haha. Anyways, Paul noticed and took photos as below.

Don’t get the face in the photo!

Saturday I did 2.5hours on the way to Duncan where Ross picked me up and we drove to Mount Washington. When we got there I registered for the BC Championships mountain bike XC race that was happening the next day and Ross and I went and rode a loop. This was Ross’s FIRST day back on a mountain bike in singletrack. Ross described the loop as “27 minute loops (for MEL) of steep, non technical climbs into technical, rolling, muddy, rocky, rooty singletrack”. It is pretty technical for a first ride back on the mountain bike so I was a bit worried about his thumb but Ross is a charger and was fine. We took 45 minutes to get through it because the steep sections were causing Ross some distress. Ha! But really, there is a climb on the course that is nearly vertical.

So Saturday night we had a belated romantic getaway at the Kingfisher Lodge. I bought Ross a gift certificate there YEARS ago for Christmas thinking we would go up skiing and use it but we never did. So Saturday we used it and had a wonderful three course dinner with a nice bottle of wine as well. Yummy dinner! The highlight for me was an appetizer with venison sausage and smoked tuna. Weird combination, yummy appy. 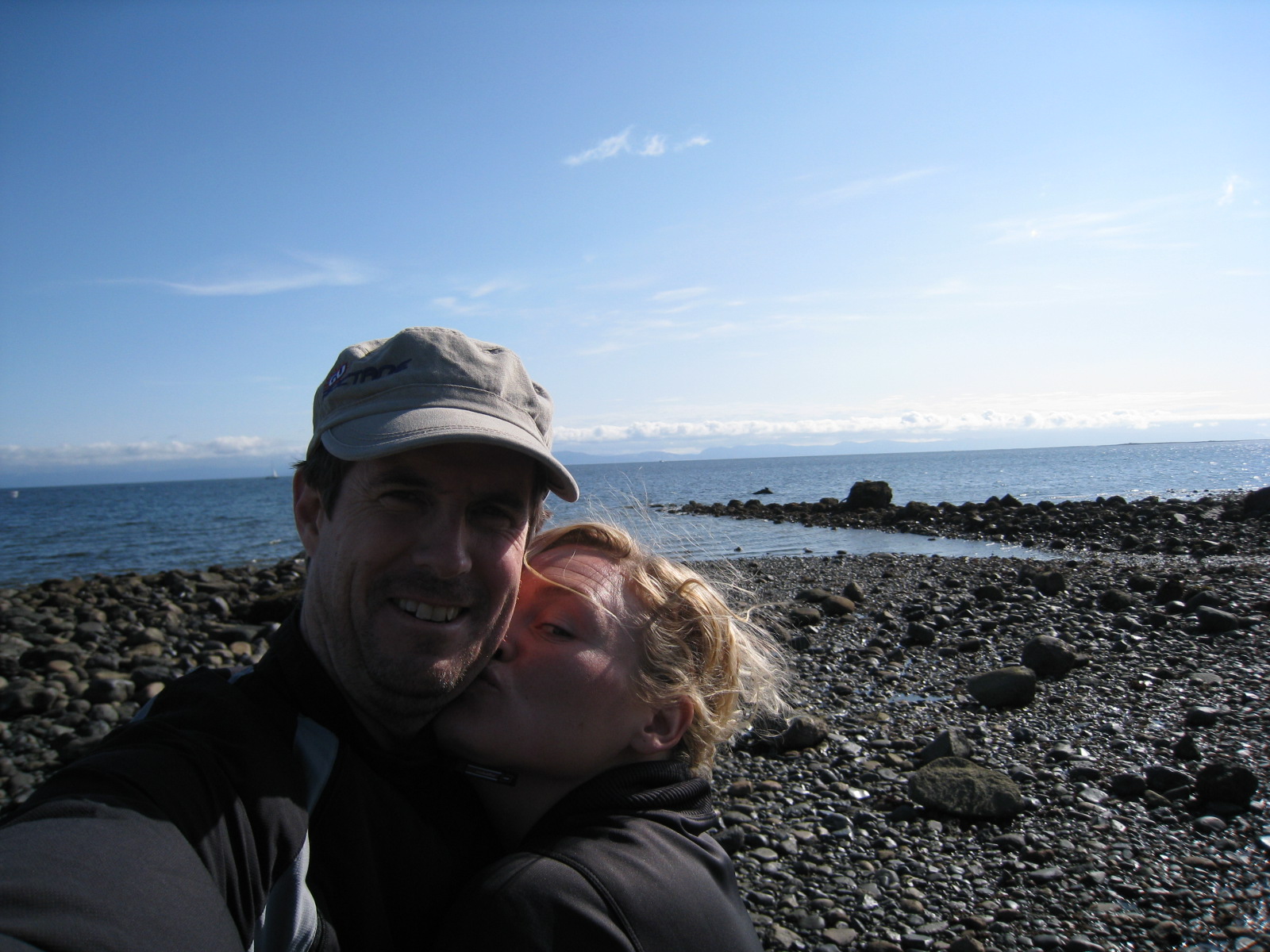 On the beach at the Kingfisher

The next morning we had a leisurely breakfast with a trip down to the beach, I washed the mud off my bike from the night before and then we packed to leave. I left in front of Ross to do my warmup down in Courtenay because it was much colder on Mt Washington where the race was so I set off down the road and Ross was to leave 15 minutes behind me. Of course, he lost his phone so 30 minutes into my warmup I was wondering if I was riding to the start! Ross showed up, sans phone, and we blasted up the mountain with exactly 5 minutes to spare before the start. In fact, on the start line I didn’t realize we were starting WITH the pro men and I ended up last up the first climb. Oops! It all sorted itself out by the second steep climb and I was off riding my own pace at the front.

I tried to hold steady on my lap times but wasn’t that successful. I went 26 for the first one and by the last one I was at 28 minutes. Could have been fatigue from a 28.5 hour week or it might have been the course drying up was actually making the boggy section at the back slower, which I think might have been the case. Regardless, I won my first BC Championships in like, 8 years or so! Ha.. bringing me back to my last life as a mountain bike racer in BC. Fun times! Dawn Berg won the overall BC Cup and she was second. I was the only one on the start line who actually rides around in spandex for a job so it was definitely on me to win it. 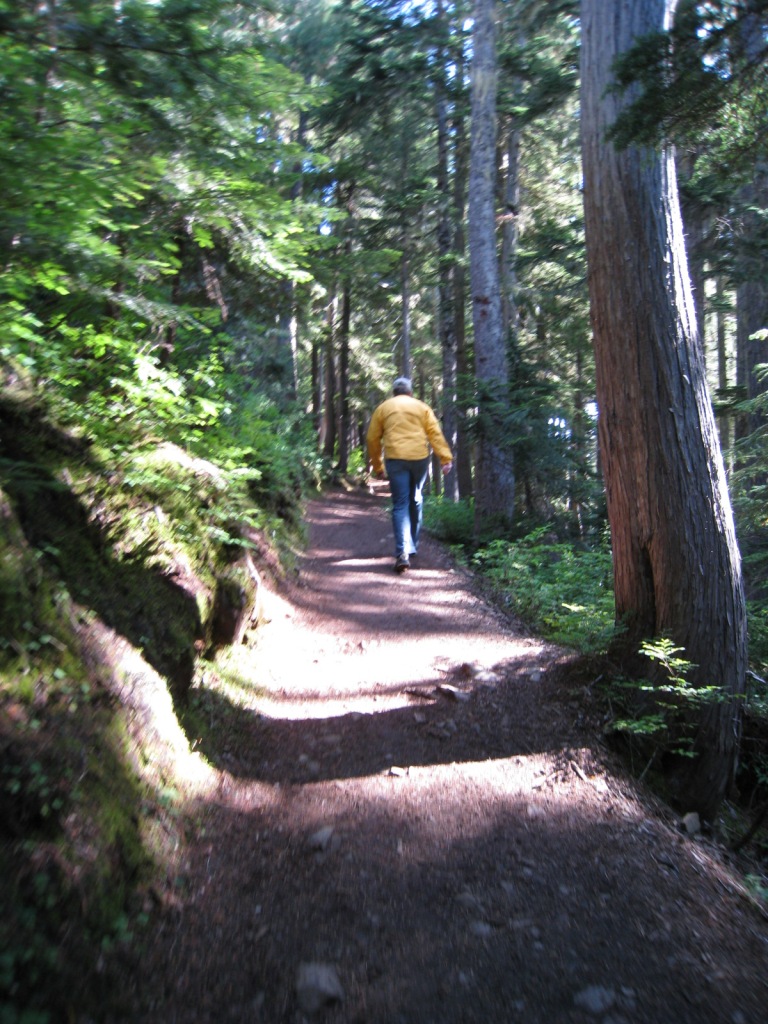 So after the awards Ross and I went for a hike to Battleship Lake in Strathcona Park. This area is where the Mt Washington Nordic center and trails are located and it is beautiful! Ross and I very much enjoyed it despite the fact we ended up WAY overdressed because it was warm and protected down there in the forest. 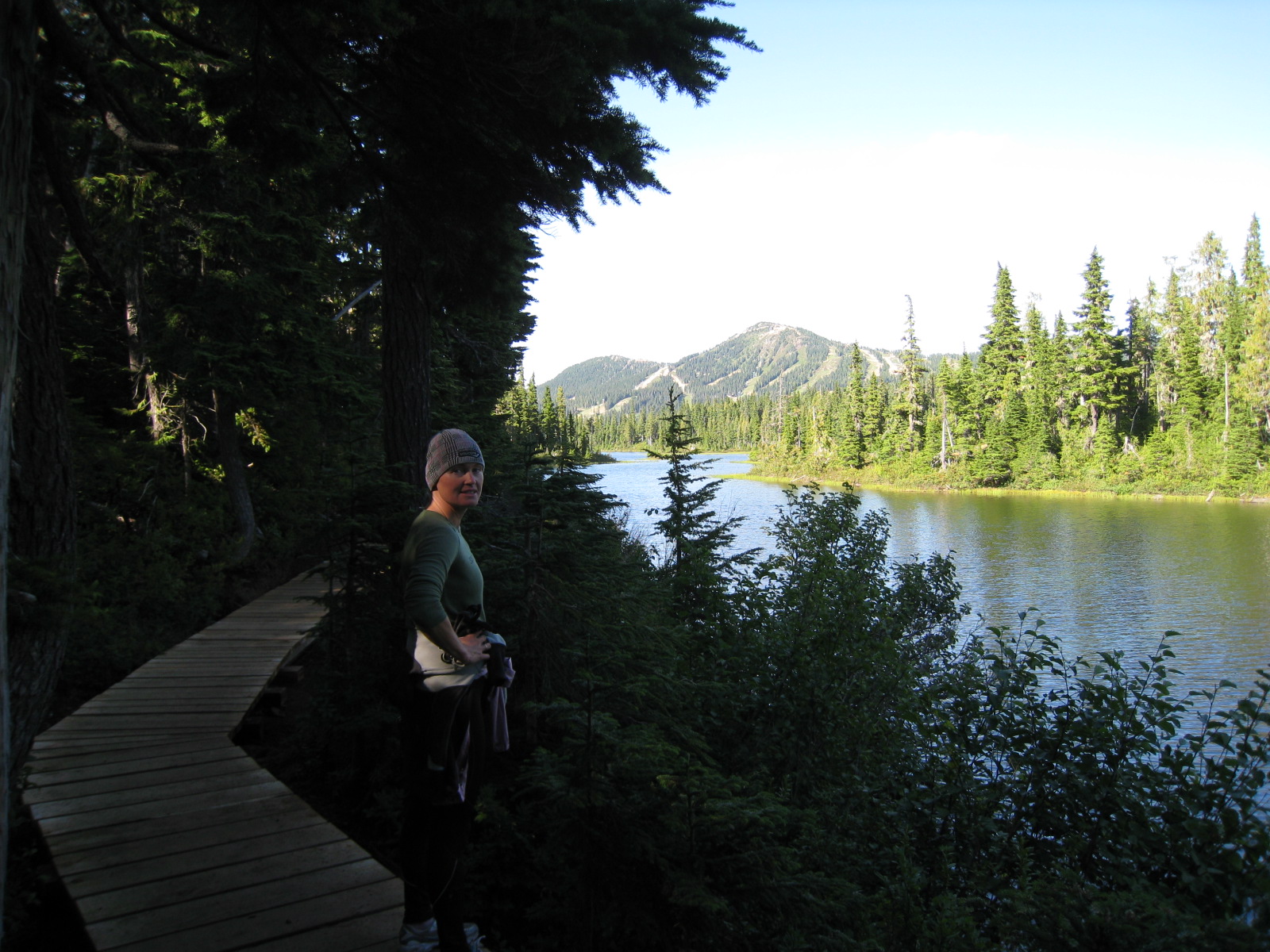 Views at Battleship Lake in my cute Saucony duds

The week ended with a trip to Gina’s Mexican Restaurant in Nanaimo just like the good old days when I raced mountain bikes and the whole crew would stop there on the way home to fill up on really great Mexican food. I never used to enjoy it as much as I do now. The whole wheat tortilla with spinach, chicken, sprouts and chipotle sauce was SO good after a tough day of training. Heaven on a plate!

So thanks to Maxxis for great tires to conquer the muddy mess at Mount Washington! Thanks to Nature’s Path for feeding me well to get me through the tough week. Thanks to BMC for the Fourstroke 01 that kicked butt on that course. Thanks to Shimano, Fox, Lazer, Titec, Sundog Eyewear, Saucony, Cycleops, Fizik, Gu, TYR, Genuine Innovations, and ALbabici for the fabulous support. Things are looking good. To still be strong and training very well at this point in the season certainly bodes well for October. Thanks for reading and stay tuned, next week is Canadian Offroad Triathlon Nationals.