Well I have made it to Gunnison, Colorado for the first leg of my 24 day altitude training camp. I am so stoked to be back with the Burt family in their awesome house with their awesome kids and awesome company. I love it here. This is such a nice place for me to begin my month of altitude training. I kicked it off with the Crested Butte Bank XTERRA triathlon this past weekend and it was déjà vu to last year where I raced as hard as I could, which wasn’t very fast, and the mountain woman Jenny Smith kicked the crap out of me, going very fast, only this time the mountain woman from Durango, Shonny Vanlandingham, joined the party. No matter. When you are coming from sea level and racing at 9,200 feet on the fourth (read: worst) day at altitude after racing a half Ironman these things can happen. Still, it was very beautiful with wildflowers everywhere, fun single track trails and a jam packed full race (there was a waiting list of about 100 about a month ago!) so good times all around. My travel started with a flight to Salt Lake so on to the story…. 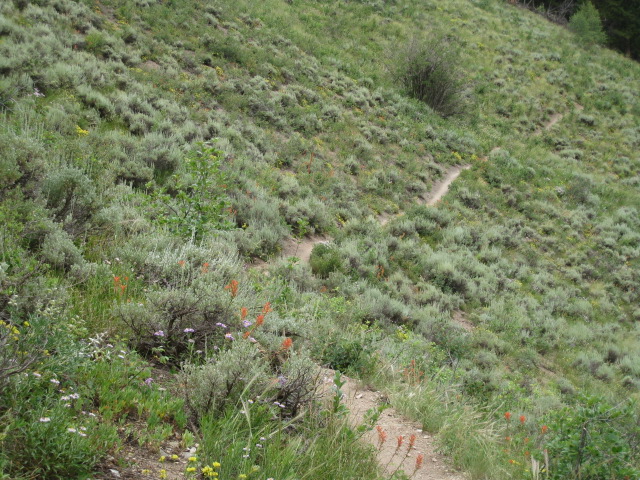 Sample of the singletrack and wildflowers in Crested Butte…

I stayed home until Thursday thinking it would be better to try to recover a bit at sea level before heading to altitude. Actually, I also wanted to have three days at home so I was sacrificing the weekend for my own homesickness. So Thursday morning I packed up my training life to last for almost a month on the road, said goodbye to Ross who wouldn’t be joining me because his thumb is still too gibbled to mountain bike, and flew to Salt Lake City. I arrived at about 7 pm, grabbed my bag and my bike (or what I thought was my bag) and cruised over to pick up my rental car.

I have rented probably more than a full consecutive month this year in total days, most of which were with Thrifty Rental cars. However, this day, I arrived at the counter and was told I needed my visa, drivers license (nothing new), a PRINTED copy of my return itinerary (huh?) and proof that I hold liability insurance for the car (WHAT???). So tell me, fellow travelers, do you carry this? Seriously. Nothing on my reservation indicated I needed to bring this stuff so it caught me blindsided. It was going on 8 pm and I didn’t have a car to get to my destination AND they were planning to charge me an extra $12/day for the liability. Add that up for a 24 day rental on TOP of what I was already paying for the car. I was losing it… trying to get Ross to find me liability info at home blah blah while the totally unhelpful, and frankly, complete asshole of a Thrifty middle manager was SMIRKING behind the desk.

So then I went across the aisle to the two nice ladies at National and asked, “Do you need my liability insurance info or a copy of my return itinerary?” The answer was “NO”. So I rented there. I think I probably got a better deal in the end as well so you know what, F&*(&ck YOU Thrifty!! Remember that Thrifty is the SAME rental company that towed my car away for no reason the day before Nationals in 2005. Off I went in my 2009 Nissan Murano from National to stay the night with my friends Bonnie and Adam in Utah.

When I got in I was so tired so I brought my bag in, unpacked my bike to check for damage, socialized for a little bit while we planned to swim early in the morning only to find when I went to get my jammies that someone had replaced my jammies and cycling stuff with a hideous bridesmaid’s dress and some other paraphernalia that I don’t even want to get into. Someone was going to Orem for a mormon wedding. That someone was going to have to be me if I didn’t find a way to get my bag back! I had grabbed the wrong bag at the airport and if you have ever seen my bag, is a very difficult task! Who has a green REI bag? Well, this girl did so at 20 to midnight we were racing to get back to the airport to swap out bags and only returned home by 12:30am, swim cancelled, crazy day finished.

So the next day I did an easy ride to Biker’s Edge in Kaysville to say hi, went for a swim and drove a ridiculous 8 hours to arrive in Gunnison (lost my Mapquest) at about 10pm. Blown. After a leisurely sleep in I went up to pre ride the bike course, register and do a fun clinic with Jenny and Brian Smith. We had ALL beginners at the clinic which was amazing. XTERRA is really catching on! So between the three of us and Ashley Burt, the race director, we managed to soothe all fears and get everyone fully stoked for the race the following morning.

Okay about the race. When I entered Vineman I knew full well that Crested Butte was going to be a training event rather than a key race so I was pretty casual about everything to do with the race. When the morning of the race arrived I was not even a bit nervous which may have been bad but no matter what, nothing I could have done aside from arrive earlier would have had any impact on the outcome of the race. It was a perfect day for racing, Grant Lake was gorgeous, the trails were in perfect condition and the competition was great. Jenny Smith was very obviously fired up for the race and Shonny Vanlandingham was there to get in some good competition. Not much different from a Championships event! But they were on a different program from me since I was in survival mode.

I have been down this road many times before, having done the Crested Butte triathlon three times and having been to Gunnison twice in the fall to train for Tahoe. I get in, I am okay for one, maybe two days and then all my power is gone until I have been in town for at least a full week.

The average altitude for the Crested Butte race is 9,200 feet. Keeping in mind that the effects of altitude are exponential per thousand feet (so 6,000 to 7,000 for instance is a larger jump than 5,000 to 6,000 feet) to go from 0 to 9,200 feet is fairly difficult. Your body quickly dehydrates and your heart rate increases to try to accommodate for the fact that you cannot get the amount of oxygen per breath that your body is accustomed to. When you are at altitude for awhile, your body will produce more red blood cells to try to harvest as much oxygen from the air as possible, it will stop dehydrating and although respiration and heart rate will still be higher, it will calm down. At the fourth day, your body is like “I’m dying here!!” and everything is uncontrollable. So that is how my race went. Lots of really hard breathing along with a lot of lactic acid for relatively easy efforts.

First the swim. You are already going without air when you are swimming, to some extent, so when the air you are breathing is of limited use to you, swimming is very difficult. I started the swim slow and got slower. I managed to swim on feet the whole time but it was very slow. And very short which also did me no favors in giving me a head start on the mountain goats thrashing about behind me. I swam 15 minutes so there is not much time to give away at that rate so I knew that Jenny and Shonny would not be far behind.

On to the bike. I rode the first loop very well. I made one mistake when I heard Brian Smith coming behind me but other than that I cleaned the whole thing. Thank you BMC Fourstroke 01! That was sort of like staunching the bleeding of time that was about to happen. As soon as we were on open road and going uphill I started going backwards fast. Without power you go slow. Period. That is how it went, as Jenny caught me by the top of the Strand climb and I stayed on her wheel through the singletrack only because I would catch up on the descents and get gapped on every little uphill or flat bit. No power. I was dropped for good as soon as we turned onto the main fire road back to transition as Jenny had a good group with her and we rode into a headwind. Shonny then caught me on the last climb to transition so we left together onto the run but I was already showing signs of meltdown so it was mere formality to get the run finished.

Then there was the run. I think it sounded like I was at a 200 bpm heart rate but really I was at about 175 bpm and none of the oxygen was getting to my legs. I moved so slowly through the forest but really enjoyed the beautiful singletrack in the aspens, the nice view from the top and all of the super great volunteers who were yelling encouragement. It was fun even if it was really, really slow. Frankly, I wasn’t worried about the result because it wasn’t like I gave up or anything, I just had no ability to go. The best I could do was just finish.

So Jenny held off Shonny and I rolled in for third place. Fourth place was another local girl and winter Olympian and XTERRA first timer Rebecca Dussault and fifth was Sara Tarkington from Boulder who probably liked the altitude only a little more than I did. Brian Smith won the men’s race with Brandon Rakita in second, Cody Waite in third, Spencer Powlinson in fourth and Will Kelsay in fifth. Mountain men for all top five and a mountain woman sandwich with Mel in between on the women’s podium.

This was a fantastic kick off to my mountain assault. I have no intention of going slow in Utah so we shall see my progress over the coming weeks as I plan to do XTERRA Indian Peaks, XTERRA Beaver Creek and XTERRA Mountain Championships… with the Mountain race being the ultimate goal. Right now I am training in Gunnison until Friday when I will jet to Boulder for the weekend.

Thanks to the Ashley and Tina at the Crested Butte Bank for running such a great race that I wouldn’t miss for the world! Thanks to all of my sponsors for helping me to do these training events that are so key for the World Championships at the end of the year and thank you to the Colorado triathlon community! I have homestays in Gunnison, Boulder, and Vail in the coming weeks because of your little mafia and I am so, so grateful!!

Okay, training on the menu…