The 2015 edition of Challenge Penticton was both a great success and a fresh start for this iconic race.  It appears that during the last three years the event has been trying to find a new identity moving forward and this year the race started to realize its new potential.  It was announced that in the future Challenge Penticton will be one distance, 3km/120km/30km and will become a qualifier for the ITU Long Distance Triathlon World Championship.  I applaud this new direction and I commend both Michael Brown and Kevin Cutjar for having great expertise, insight and ability in creating this new direction.  Challenge racing is amazing:  the pre-race dinner, the family atmosphere, the party at the finish line and the community involvement makes these events special. I also loved what is uniquely Penticton:  the iconic race course, the stunning scenery, the amazing volunteers (many who come out every year) and the new stadium finish line.  It was my first time experiencing long course racing in Penticton and I appreciate so much the wonderful people I met on this trip! 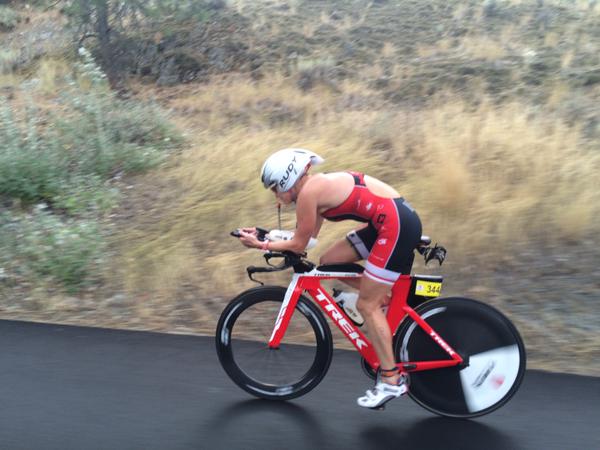 I did lead the race from 20km and set the fastest bike split.

Unfortunately, my race was not all that I had hoped for as it was marred by a penalty due to a pro male while I was leading the race and ended with DNF.  The woman at the top on race day were no strangers to the podium and put on a great display of strength.  I am so pleased for Jen Spieldenner, Carrie Lester and Heather Lendway for earning the top paychecks on the day.  Special mention goes to Canadian superstar runner Malindi Elmore for earning the top Canadian woman’s position with her superlative running ability.  The men’s race was a who’s who of amazing Canadian talent with Brent McMahon winning the race, Trevor Wurtele taking second and Jeff Symonds taking fourth after a flat.  Chapeau boys!  What a super field of professionals with 45 of us in total making the trip to Penticton. 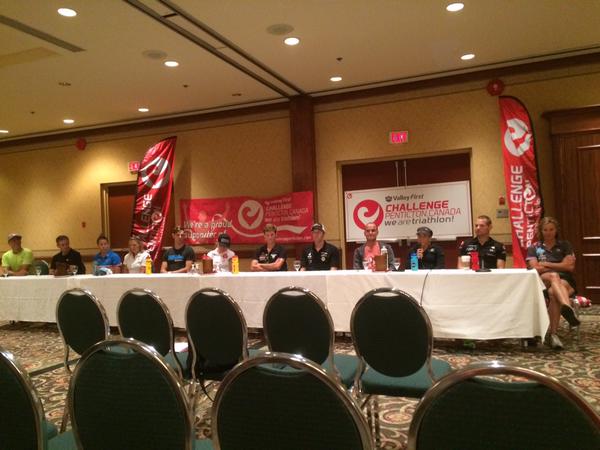 My weekend staying with Alan Kidd and his wife Gwyneth was so great.  Alan is very knowledgeable about triathlon so sharing stories about the race was fantastic.  Okanagan Lake was beautiful for swimming in my fabulous Blue Seventy wetsuit and the rolling hills were fun to take my Trek Speed Concept out for a gallop on that beautiful bike course that I enjoyed pouring some effort into.  Yves and Anne from Asics Canada were on hand  sharing the Asics love and I will enjoy trying out the new 33-M shoe on the trails.

Any fears of fire related air quality were fortunately resolved by a timely shift to rainy, cooler weather and the day was beautiful.  I did have some problems getting to Penticton because of the fires as my plane on Friday flew all the way to Penticton before turning and flying back to Vancouver without landing.  I was told no flights would land so along with three other women I hopped in a rental car to Kelowna to make it that day.  Nothing like some quick organization amongst four motivated women to fix a problem.  Thank you to Genevieve, Kirsten and Gwen!! 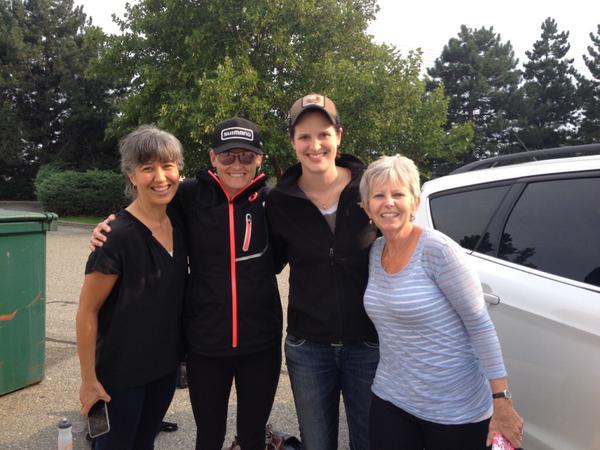 A broken toe on Thursday (random slip and smash into the couch), a botched flight on Friday and a penalty on Sunday means I have weathered this storm and it is time for things to come right again for the next race.  Cheering on the full distance racers on the run course and at the finish line at midnight was a highlight.  It was a great experience and it renewed my admiration for the Challenge style event.  These events are top quality with all of the character of a grass roots event.  This will certainly not be my last Challenge.

Thanks very much to Kevin and Mike for inviting me to the Challenge Penticton race.  It was great to see the Challenge St Andrews organizers Tressa and Scott there with the family to cheer Scott to the finish line as well.  Thank you to all of the amazing women pros who came to Canada to make this event so impressive with such a large field.  Thank you to my friends and family for coming to cheer!  Thanks Trek, Bontrager, Shimano, Blueseventy, Rudy Project NA, Champion System, Asics Canada, Frontrunners Victoria, Powertap, USANA and Powerbar.  I did ride another fastest bike split so I am recovering well from Ironman Canada and I look forward to another day at the races at 70.3 Silverman!