This past Saturday morning I participated in “Canada’s Hardest 10km”.  No joke.  It was retardedly hard.

I have been invited by Mark and Nick at Frontrunners in Westshore Victoria to run in this race for the past three years.  One year I had the flu and another I felt that my competitive fire had leached out of my body with the last of any of my race fitness post season.  So I had never taken part in this super cool but unbelievably tough race.

This year I have been having some fun running with a strong run group so heading out for a race at this point in the year wasn’t nearly as daunting as in years past.  However, after the first 2km of the race I was pretty sure the next 8 would be very, very tough!  I think it is awesome that the race had such an insane turnout.  They broke a record for the number of participants this year and let me tell you, you have to be pretty hardcore to do this race.  So Victoria, good on ya for rocking out the turnout for this event.

I was late for the start, as usual, so my prerace warmup was somewhat abbreviated.  I think that probably helped in the end because I took it so easy for the first 3km to let myself warm up and I am sure that paid off in the end.  I was also advised by Jon to really take it easy on the downhills to save myself any potential injuries so again, I was running very conservatively.  I knew I was going to lose time on the downhills so I just tried to make the most of the uphills.

The course starts with a short run on the road before turning abruptly right onto the golf cart path at Bear Mountain Resort.  From there you run either vertically up or vertically downhill for the next 9.5 kms.  There isn’t a flat section anywhere on the course and thanks to the Pineapple Express weather system we have been enjoying for the last few weeks the course was wet and slippery.  Only the bridges were really sketchy but running through some shallow rivers over concrete was interesting as well.

I took the lead at about 5km not thinking I would win, just thinking that I would keep my steady pace and see what happened.  I ended up winning with Sarah Baker taking second (I think she is a triathlete as well!) so good that the girls had a strong race.  One of the fast runners I am training with, Dave Jackson, won the men’s event.  My time was a glacial 41:17 which is not an elite time for a 10km but given the course record for women is 40:15 it wasn’t totally embarassing.  The men’s record was 32:50 or something, set by Jon Brown himself and I am sure he is about a 27 minute 10km runner so yeah, it was hard and slow.  Thanks so much to Frontrunners for hosting me and putting up prize money for this event.. I will be back to try to run it a little faster next year rocking the colors of the Prairie Inn Harriers (thanks Bob!). 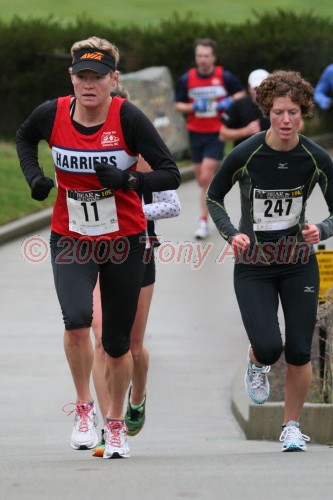 The ladies pack heads up the first gnarly hill (Photo by Tony Austin) and man I look haggard! 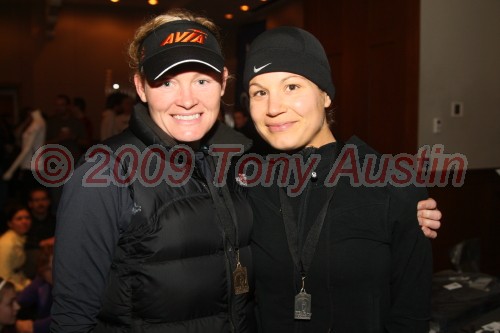 Good times!  I followed the day up with a wine and cheese silent auction fundraiser at Procity for Jamie and Linsey Duncan which was super fun.  Lots of people I haven’t seen in a long time and a good opportunity to just hang out and be silly.  We dragged the usual suspects back to our house to continue festivities.  Luckily I didn’t over do it but it was very late when I finally got to sleep.  I was tired the next morning so it took a huge amount of motor-vation to get myself out for my long run but by noon I was running up Willis Point into the dump to finish the week with a 1h45 effort in the muddy, wet trails.  It was actually a spectacular day for it.  Unfortunately, that run requires running from the very top of the mountain bike park down to Lochside and that descent was no fun today after yesterday’s race.  I am sure I am going to pay tomorrow for it.  I did a swim this evening hoping hydrotherapy might do the trick but not so far.  I am going to try couch surfing next.  It is off season so there is no freaking way I am going to park my butt in an ice bath until at least January.

Good racing by Sam and Jordan at IM AZ this weekend!  Totally inspiring.  Now if only I could find out how Mar did in Japan…

Resting tomorrow but working on the plan for next year.  For me, the athletes I coach and the members of my team.  Never a dull moment.