I believe that there is no magic formula that, when applied, will make any athlete faster/stronger/better.  I think you have to apply the right amount of training/recovery for an individual based on his or her background and needs.  Therefore, I think it is no big deal to talk about what you do on the internet.  If someone else tries to duplicate your training it will be very unlikely to produce the desired results.  You have to know yourself and be true to that otherwise you can meet with disaster.  So this preface is for anyone who thinks that any kind of “secret” is being revealed in these kinds of training stories.  The secrets lie in what goes on after training.  It doesn’t have anything to do with compression socks, ice baths and massage for recovery.  The secret is knowing what your body can come back from and staying within those limits and only pushing the boundaries that exist in your own head.  I think you can learn something from other people’s approaches but you shouldn’t automatically assume that it will work for you.

So on to our last “big” week at altitude which honestly, wasn’t that big.  In fact, I finished this week and immediately (within 36h) went on a 1 hour 45 minute run where I ended up negative splitting and probably ran more than an mile further than the previous week so really, I absorbed this week well.  Did I need to do more?  Hmm, we’ll see in Maui…  I have been getting some new advice, mostly on the running front but his thoughts are helping me to shape my overall program.  Not talking about him yet.  I will when I can dedicate some proper space and can show some solid results of his wisdom.  He is my secret sounding board for now.  Anyways, his advice was extreme moderation while training at 8000 feet with anything not-moderate done down at 5000 feet.  Sounded intelligent to me.

Week three started in Boulder.  After my not so hot 10km pace/marathon pace alternating run on Sunday I had only a swim on Monday to do.  So I did that and then hung around with Becky looking at new fall fashions.  Tuesday I was ready to go again.  The plan was a big set of 2 minute intervals I attempted to do in Vail done all over again in Boulder.  Luckily I had Kristoffer Nielsen to train with (along with Paul who wasn’t having anything to do with the intervals) and he made the set honest.  They were hard.  It isn’t often I am acclimated enough to hit the mid 190s heartrate within 2 minutes at altitude.  I was going really, really hard.  I found I was strong when Poorman’s Road flattened out a bit but was getting killed in the steep section around the corner by Stoff.  I focused and suffered through my weak section telling myself I was getting better each repetition, which I wasn’t, but I was staying very consistent in distance per repeat.  After that I bid adieu to Stoff and headed out for the run repeats which were 10×1 on a hill.  Yuck.  The first one was utter and complete crap.  I almost considered bagging it but after three I was beating the pulp out of that hill almost to the point that it wasn’t long enough. YES!  Done.  Couch.  Legs very sore and abused.  Confidence at an all time high (even though Stoff crushed me I was good that day so I am stoked for him). 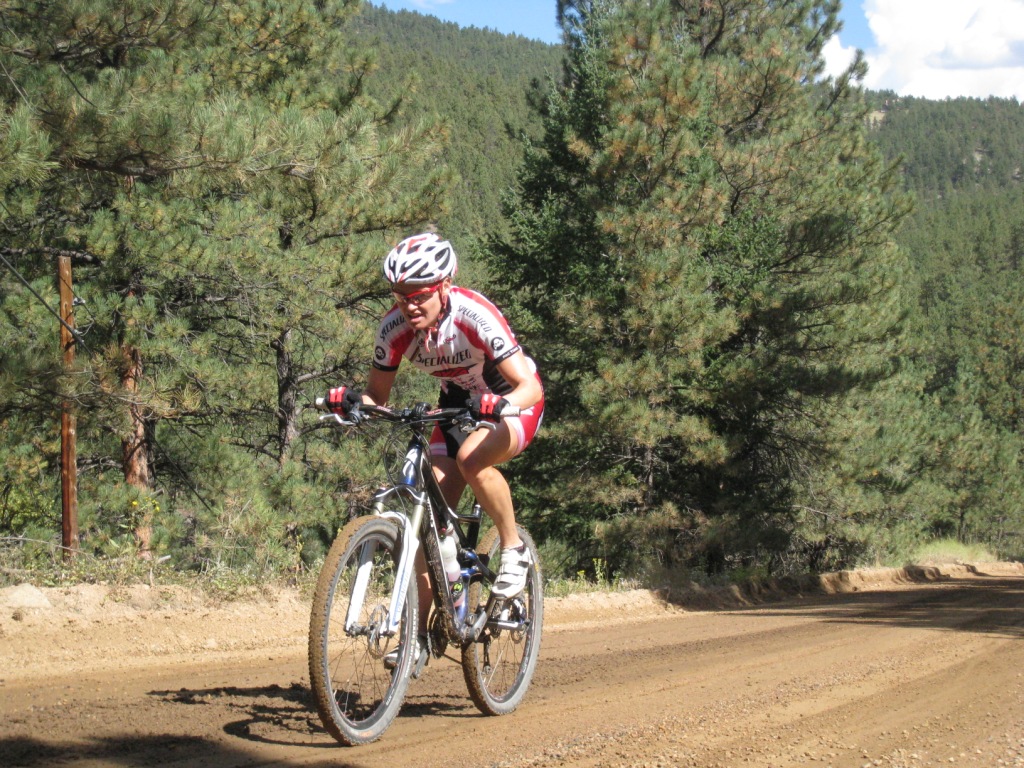 Stoff drops Mel but she keeps a lazer beam on him 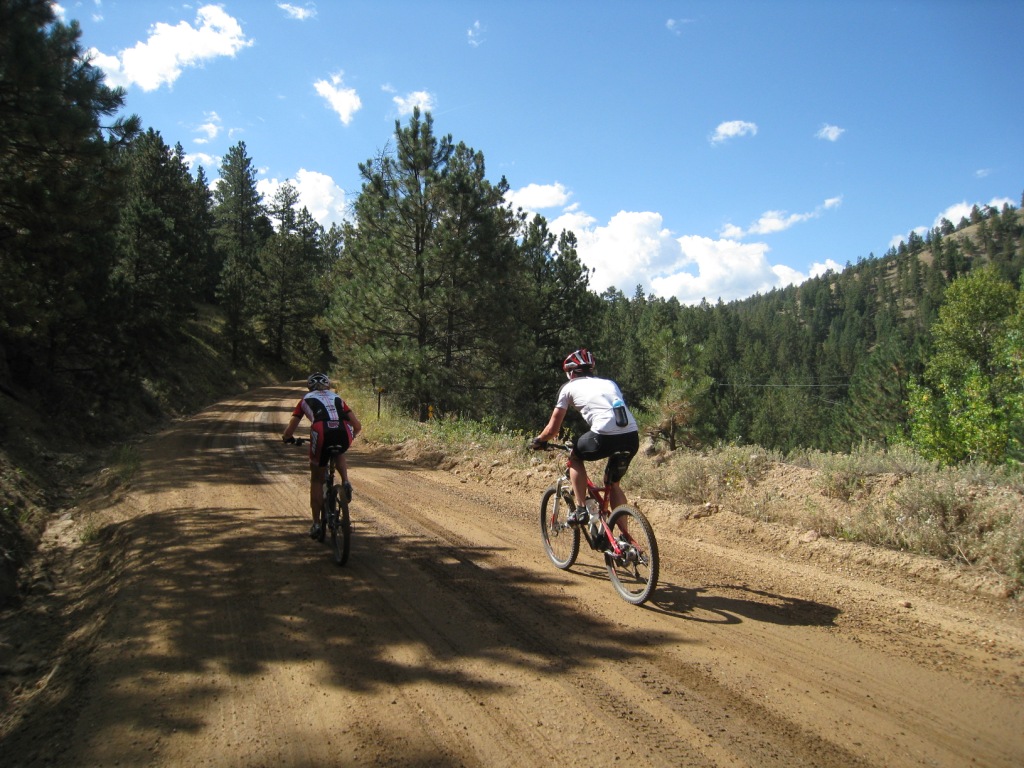 Mel takes off in front of Stoff

In advance of my Boulder arrival I contacted Julie Dibens to see if she wanted to go for a long ride while I was there.  I did ask if she wanted to go mountain bike but she is more focused on the TT bike right now so she was out for the intervals.  I was pretty clear on what I was doing:  3.5 to 4h of casual base riding.  Up to breathing a bit hard (steady) but absolutely no more (ie no suffering) as I already had enough smashing it.  She was happy to put together a training group and I met them the following morning (at the crack of dawn, I might add!)  So our group was Julie, the Chrissenator Chrissie Wellington and a friend of hers named Dion.  I was riding with the British Invasion.  They have the cutest accents!  I thought it was the coolest thing to have three strong girls out riding… RARELY have I ever found two girls that can ride that fast in Victoria, usually it is one other fast girl (like Erinne) and a big group of guys, so this was super cool.  Unfortunately, Julie told me Chrissie wanted to do intervals and she was going along with that, as opposed to my more moderate plan.

So, what to do?  Do I go and smash myself just to see where I stand during a training ride?  Once upon a time, I would have done exactly that just to feed my confidence.  But now, I am a little bit smarter than that.  And more confident.  And maybe lazy?  Haha!  Anyways, I didn’t need to smash myself up an enormous hill to prove anything to anyone on the ride so I started up the big Ward Hill (we rode Peak to Peak from Lyons) and as soon as I didn’t feel like it was easy/steady anymore I put the governer on.  I told them I would be riding casual so if they wanted to regroup at the top, great, if not, oh well.  Not the plan.  I know what I can/will/should do. 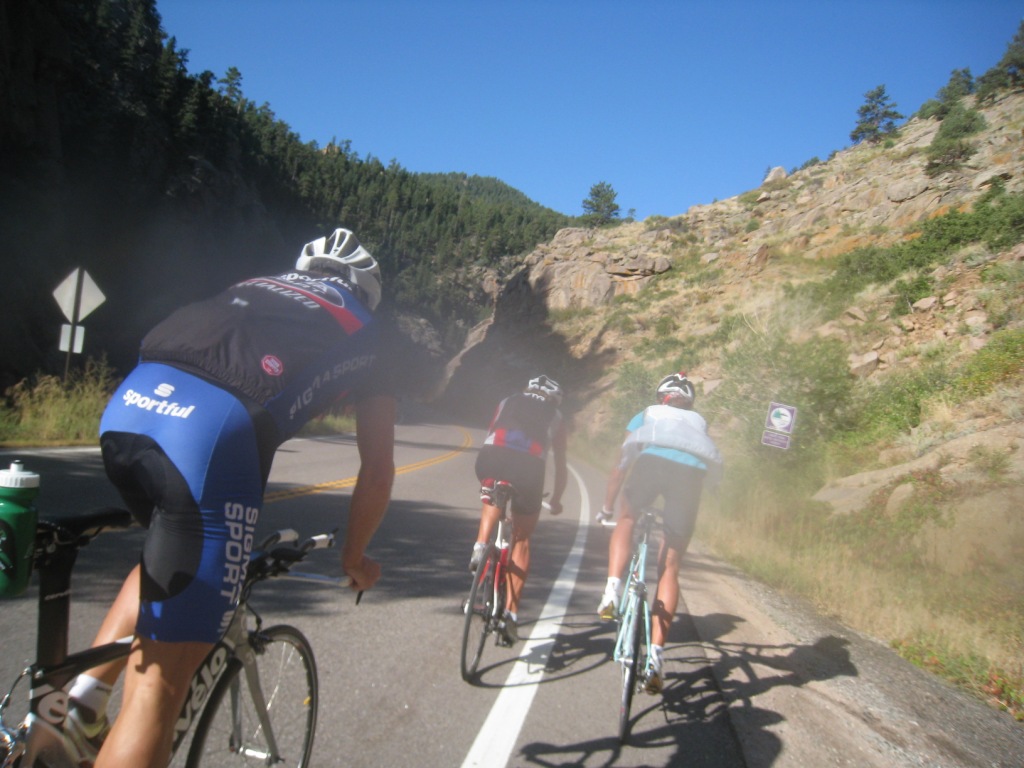 So I enjoyed a fabulous day cruising in the mountains, albeit alone for a lot of the time.  We regrouped and I had a chance to chat with the girls periodically and both are very nice.  They were riding TT bikes and I think when you get on one of those there is no point in cruising because really you are in a rush to get off of the thing.  I, on the other hand, was totally comfy climbing in the mountains on my new Specialized road machine and just took photos and relaxed.  I did 5000 steasy feet of climbing with some gorgeous vistas to enjoy.  Peak to peak is a beautiful ride.  One lost opportunity to train hard with strong girls but oh well.  Maybe next time.  I will have plenty of opportunity to compare arsenal with Julie in Maui.  This is part of that moderate approach I mentioned above.  It was tough mentally but I am feeling good about it now. 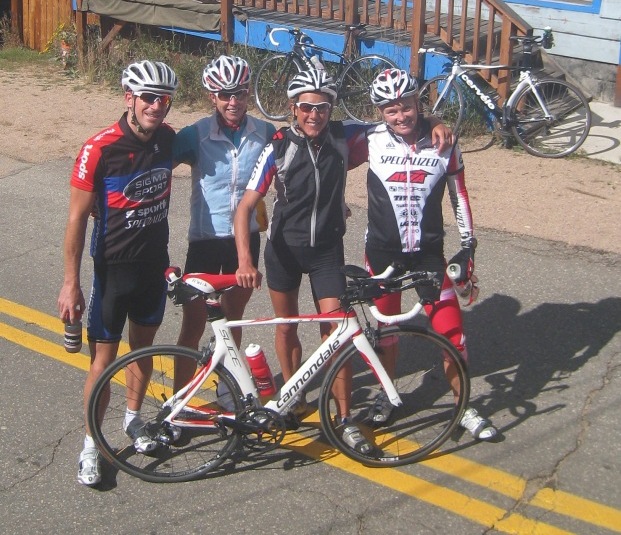 Mel and the British Invasion – I want to come back and train with these two!!  Oh, and notice the Canadian with knee warmers/arm warmers/vest/long fingered gloves while the skinny British triathlete girls head into the mountains half naked?  Honestly, the Brits are the ones who really tolerate the cold well 🙂

Thursday I was back in Vail and did my 1h45 run out to Vail Pass and back.  I ran on the bike path because that is the only “flat” running in Vail although it is a steady climb there and a bit of a descent back.  I felt awesome!  Then a swim in my wetsuit (the pool was FREEZING) and some yoga and a spin and done.

Friday I did a hard swim (well as hard as I could go in Vail) and rode out to Ingrid Middaugh’s house to go for a little run with her and Porter.  Porter is 3 11/12ths right now and is so darn cute I could barely stand it.  He rode while we ran and chatted.  It was a great cruisy day.

Friday evening I was back to Boulder.  I assembled a small crew for the Saturday Superwalker assault so I was joined by Paul and Stoff.  The plan was race pace up Flagstaff to the trail, ride the trail counter-clockwise so we would ride up the steeps and then race pace back up from the hike a bike to the top of the climb.  Again, I was crushed by the boys but I think it was starting to equalize on the way back out. I wasn’t going over race pace.. just at race pace so I would be as strong coming home at 3.5h as I was going out.  Then a quick 30 minute run around Wonderland Lake to finish.  Strong but not an outstanding day by any means. 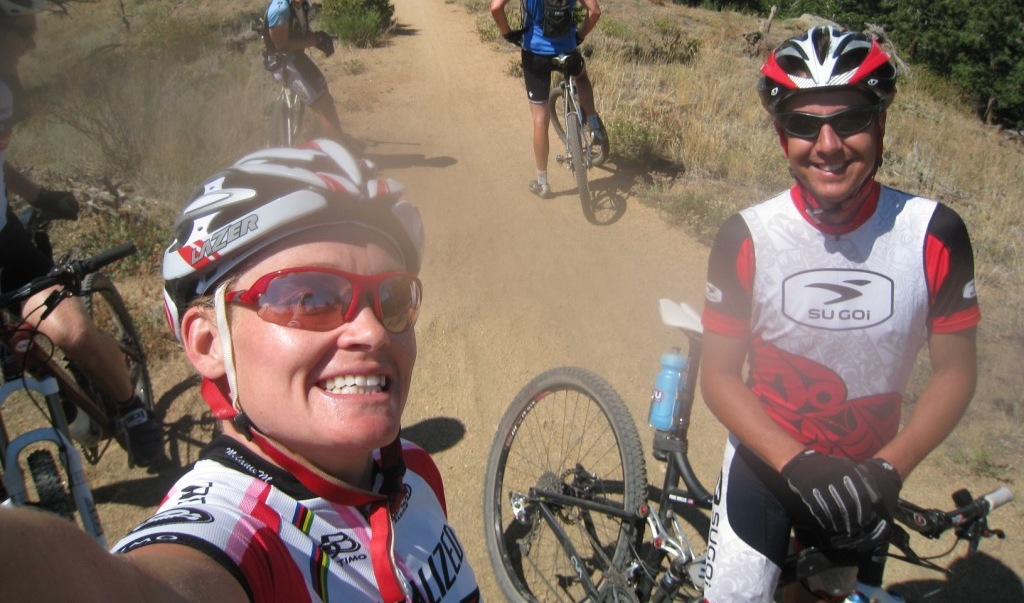 Mel and Paul on our Super Walker ranch assault.. still having fun!  My camera doesn’t like sweating in my pocket it seems.

Sunday I went running again with Brian and did a new workout.  We did 5 minutes at 5km pace, three rest, 10 minutes at 10km pace, 3 rest, twice.  The whole run ended up being 85 minutes because we did so much warmup and cooldown but the run was a heck of a lot better than last week.  We ran 5:50/mi and 6:15/mi which was a big improvement on last week.  I am sure if we did it again we would leap another notch faster given how big the improvement already was.  After that I did a spin on my bike for 90 minutes and packed my stuff back to Vail again.

Monday I woke up, did yoga, did an easy spin, got massage and had an ice bath.  I felt like a million bucks.  In fact, I really wasn’t that tired!  What the?  This 2 hard workouts per week for bike/run was not killing me.  I could have easily done more.  But would I be faster?  Not sure.  Only time will tell.  All I can see is week three, another 24hours and I was 100% recovered by Tuesday morning.  Weird.

So, there you go.   Three build weeks at altitude, now 100% acclimated probably to 8000 feet, one last run in Vail of 1h45 and I was in Park City.  Well actually, Deer Valley so I could stay waaaay up at 8100 feet but train down at about 6000 feet.  That is the next installment:  Sharpening.  Stay tuned. 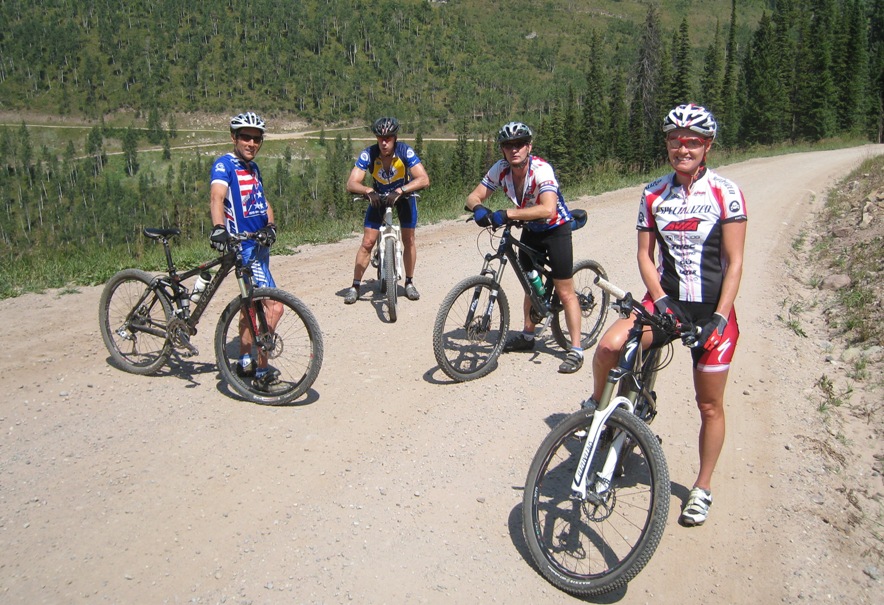 Thanks so much to Kevin Deighan (far left of me) for his awesome hospitality in Vail  Thanks to Karl  (immediate left of me) for all the awesome swims and Peter for the great interval workout.  Vail rocks!! What a great training environment!