I have been converted.

I raced the BMC Fourstroke 01 in Richmond this past weekend and after that experience will not likely ride a hard tail ever again. BMC makes the lightest dual suspension bike you can ride that still feels like a hard tail when you are climbing. There really is no tradeoff. I ride a stock bike that anyone can buy at their local bike store and it weighs ONE pound heavier than the hard tail I rode at Worlds last year.

Okay but I won in Richmond so things are good and lets talk about how I felt much more like me this past weekend. I managed to hold off both mountain bike phenoms, Jenny and Shonny, plus Candy Angle who held on to fourth and super runner Danelle Kabush who ran up from seventh to fifth. Mad props to Josiah Middaugh who broke away from Dan Hugo to take the win. I am stoked for Josiah to climb back up on the top spot…

(Conrad unfortunately was not riding Maxxis and had a flat-two races in a row!!! No meat pies for you in Wales…

Tyler Johnson took third, Andy Noble was fourth and Craig Evans was solid in fifth. So, read on for the tale of Richmond ….

I did a ton of nothing the week between Alabama and Richmond. First, my ‘Bama homestays Mark and Dianne helped me to ritualistically sacrifice whoever that was racing last weekend with my race number to the critters in the lake. She is gone now. I then flew to DC to stay with Kathy and Pierre (plus Valerie and Madison) at their house in Virginia. The first night we did a clinic on racing XTERRA at The Bike Lane bike shop which I think went really well. That day I also had a wicked massage and adjustment (she is a chiro) at Positively Chiropractic and we went and ripped some trails in Wakefield park. She is the best mountain biker/chiropracter I know… and she is from Victoria! Then I spent the rest of the week at our friend Jay’s house in Richmond lolling on the couch in between short bouts of fun single track riding, swims in a nice outdoor pool and a session on the tready (that was mostly for my head, less for my legs).

3Sports in Richmond built my new Fourstroke for me on Thursday morning and I was SO excited to head out riding on it. THANKS SO MUCH YOU GUYS YOU ARE SO INCREDIBLE!!!! Andrew said he took a quick burn on it and said it felt sweet… he was right. For the twisty, rooty singletrack in Richmond the Fourstroke was perfect. I rode with Maxxis Crossmarks and 20psi on Thursday and Friday and absolutely railed through the forest. Ross refused to let me race with tire pressure that low because of all of the road sections but for riding, the low pressure was amazing.

The volunteers in Richmond did a fantastic job of building new trails and improving the existing ones. The course was even longer with more fun bridges and corners to navigate. It is an incredibly fast race but still somewhat technical since you are only going in a straight line when you are on the road. Super fun BMX-style whoops and berms are everywhere. It is one of my favorite venues.

So race morning I woke up determined to prove to myself that last weekend was a “once in a career” mystery and this weekend would be redemption. Well, I had some help from Ross the night before in deciding that would be the case! I rode down to the course pretty confident that no matter what kind of legs I was having, I was better than the performance I had the weekend before. NO WALKING!!

I did a reasonable swim warmup and before I knew it we were off. I had a super start, was right in the front pack and then got beached on a rock. Scrambling off, I sprinted back on to feet. The pack was starting to split. Then everyone was running across Belle Isle and while I was running I was getting run down from behind and crazy people were diving straight in on the other side. Not being able to see all the stuff under the surface, it wasn’t worth it to me to do a huge dive there. Another shrapnel of the pack. Then I was beached again on some hairy rock. Gross! When do you get road rash from a swim? I am covered by it today… all from swimming. I then stupidly dove off it into another rock. Bam! Luckily my goggles took the brunt of the landing. DO NOT UNDER ANY CIRCUMSTANCES DOLPHIN DIVE AT RICHMOND!!! I am lucky I didn’t crack my head open or worse! 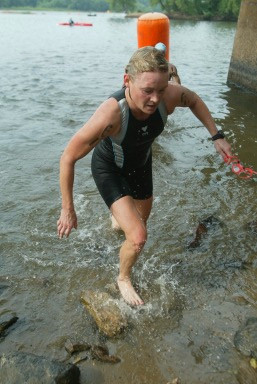 So then I just stopped fighting, finished the swim and ran to transition behind Lesley Paterson, Candy Angle and Christine Jeffries. I caught all three within 2 miles. SWEET! Miles of fun singletrack all to myself! In fact, I really did not get caught by anyone after 3 miles.. it was weird. Normally more guys pass me. I guess I was giv’n’er. Thanks to the Fourstroke.

So I got to transition not really knowing where anyone else was but knowing how fast Richmond is it is very difficult to put time on good riders on that course. Everyone kind of rides the same speed. So I starting running conservatively, planning to build a bit on the run then find out where I am later in the race.

I think I ran very solid turning over well and felt smooth and comfortable the whole way. Gas in the tank at the end (I thought I should save up since originally I was going to Wales to race six days later). Danelle Kabush the super speedy runner did run faster but if I need to get outsplit I can definitely handle it being her. I managed to steal a full minute from the second fastest woman on the bike and spent a lot of that race pacing off the men so I think my cycling is pretty strong right now. So all in all, a super race for the confidence. I know that my form is right where it needs to be right now and so is my head. All good. 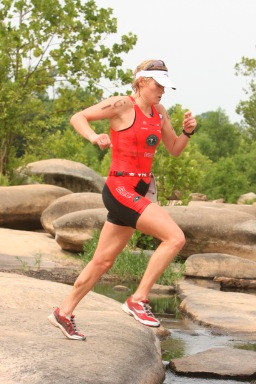 However, I am not going to be in Europe. You will need to read my next story for that. The racing home to check on Ross story…..

Thanks to all of my sponsors (please go HERE) and to my family and friends away from home: Mark, Dianne, Pettus, Virginia, Kathy, Pierre, Valerie, Madison, Jay, Andrew and Ben at 3Sports and to Scott at BMC. You rule.