So I have been going mental with a cycling camp the last four days… once I do the swim tonite I will have 24 hours of training in four days.  After very little bike volume for a number of months I was HURTING and GRUMPY and SORE today doing repeats on the back side of Willis Point.  The boys did nine.  I should bake them cookies for that.  I have no idea how that would be possible.  I was scribbled and did five.  Very obviously, this will pay off for all of us so thank you Houshang Amiri (http://www.pacificcyclingcenter.ca) for putting this all together for us.  I haven’t ridden that long/hard for a long time.  Ouchie.  I would like to give a high five to Erinne and Nic, the two other girls who did the whole camp. Erinne did six repeats today.  She is more manly than I am.  I have a sore throat so I figured doing a tiny bit less might lessen the chance that I get the whooping cough in the next two days.  My throat has been sore since Friday when I rocked up the fastest Willis Point time trial in my LIFE!  Screw you, old cycling Melanie, I kick your butt!  Then again my throat is raw from breathing so hard that day so I have been suffering for that asswhooping of myself for four days…who’s laughing now?

Okay so the point of this entry is I was google alerted to Alan’s recap of our day at the Olympics.  So, so fun!  I was stoked to be a part of Canada’s historic haul of medals and I had a super day with Alan cruising around town and cheering at the Olympic oval.  Even if I was the sole Canadian in USA Speedskating seats.. haha!  Sorry guys!  Gotta cheer for my girls 🙂  It reminded me of part of my experience there that I will share with you after his recap.

So instead of me re-recapping.. here is Alan’s version of events.  If you have never been to the Elbow Room, you must go.  The food is good too!  READ MORE

She lives in nearby Victoria on Vancouver Island and braved the ferry and traffic to drop by. Mel was actually thinking of retiring from triathlon racing and finished the 2009 season by demolishing the competition in the Championship series. But when she didn’t meet her goal of winning the World Championship she decided she needed to give it one more season.

Fortunately, she had a few days off from her training schedule so at 7:30 a.m. Wednesday morning she only needed to put in 45 minutes of running in the cold rain.

Therein lies the reason I was never a professional triathlete, plus a half dozen other good excuses. I expected high-tech rain gear, but dressed in her nylon wind jacket and toque (beanie, for U.S. readers) she explained that she wouldn’t be out long enough to get cold. 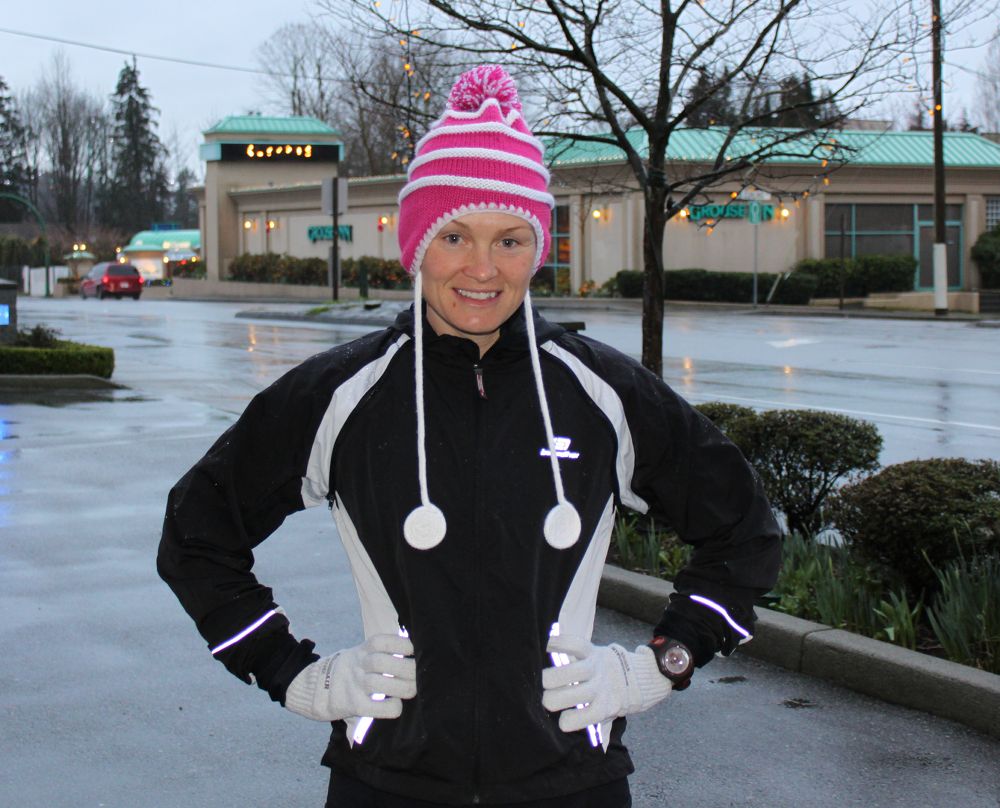 After her run she maneuvered her car through the Official Olympic traffic and we had breakfast at the Elbow Room Café, a Vancouver classic, which you would have to experience to believe. Suffice it to say that their specialty is being extremely rude to their customers. I really had to restrain myself to keep from helping them with their customer service skills.

We showed up at the Richmond Olympic Oval in time to negotiate the security screening and locate our seats with time to watch the skaters warm up. I asked Mel how it made her feel to see other athletes giving it their best and then facing the disappointment of defeat.

She explained that it seemed very different with the pressure of young athletes racing for family and country as opposed to the continual grind as a professional racer. It was obvious during the competition that she respected the accomplishments of those on the ice and was a strong “Go Canada” fan.**

Her reward was a bronze medal performance by one of the classiest of athletes, Clara Hughes, left, of Canada.

Clara Hughes, a summer and winter Olympian (one of only four), and Melanie McQuaid, the dominant force in the XTERRA Triathlon Series. Not a bad day for a mediocre jogger from Salt Lake City.

**  One comment on the Olympics versus what I do… it is incredible the volume of emotion that is tied into the performances of these athletes.  When I have performed at any event, from the UCI Road World Championships, the UCI Mountain bike World Championships or the XTERRA World Championships (and the run ones…) the difference is that fans are tied to that sport and their favorite athlete in that sport.  When I watched the Olympics, rabid fans that may have NO IDEA what is happening in the event (like ME) are cheering insanely for athletes they have no connection to other than nationality (well, for me I was connected to Clara having known and raced with her as a cyclist.. so some connection there).  It is amazing.  So to be an athlete that has essentially been working so hard in obscurity for four years to finally get your moment of truth…. WOW!  That would be an immense load of pressure to handle.  Added to that is the expectation of winning without appreciation for what a monumental task that might be.  For me, when I go to the line it is a race and likely another race will follow sometime soon.  Some races are more important/better funded than others.. but there will be another.  The Olympics… those are fleeting.  The stakes are so, so high.  Wow.  I was absolutely amazed at the whole rally/war cry of the Canadian fans at that speedskating oval.  It was impressive.  Canadians just do not go bananas like that very often.  This was a really, really special Olympics.  Thanks Alan… for the opportunity to witness it!