Abu Dhabi can only be described with an array of superlatives.  The grandest, the largest, the most expensive, tallest!!  Lots of exclamation points to further the emphasis on -est.  The transformation of this city that a short time ago was merely desert inhabited by nomadic tribes to a modern, bustling metropolis of western-style business activity is thanks to the discovery of oil in the region.  Petrol is inexpensive in Abu Dhabi ($0.30/liter) … I wonder why it is so expensive in Canada, also an oil producing country?  Progress is happening everywhere in Abu Dhabi thanks to this found weath.

The race itself was a spectacle worthy of the grandeur of Abu Dhabi.  IMG UK was an incredibly efficient, professional and welcoming organizing crew.  They flew in a pile of top professional athletes, treated everyone incredibly well, put us up in a fabulous hotel, put on an enormous show and attracted a huge field of foreign amateur athletes chomping at the bit to assault the desert challenge.  The distances of the race were also over the top:  a 3km swim, a huge 200km bike and a 20km run.  This race was not an Ironman but was still very difficult with the hot, dry, windy conditions and overdistance bike course. 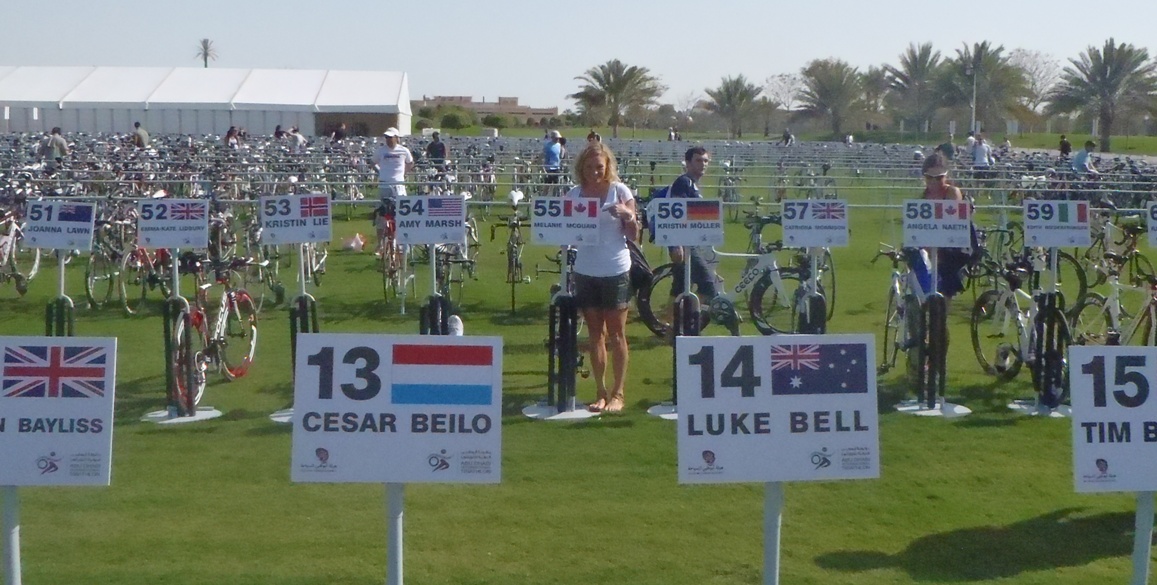 Not hard to find where to rack your bike 🙂

Click the read more tab for more of the story………………

I really enjoyed racing for the first time with the Ironman girls.  Most were super friendly and I think this race had a particularly relaxed vibe as March fitness can be a mystery for everyone.  Training leading up to the race was interesting.  Swimming in the shadow of the Emirates Palace is something I will not soon forget.  The landmarks that we encountered all day on course were amazing.  We rode past Corniche Beach and on the Yas Marina F1 circuit.  For 170km on the bike I was totally entertained by the sights, the sounds and the smells of this amazing foreign place and totally foreign style of racing.

And then I had enough.

It took me a little while to get to writing something about the trip to Abu Dhabi not just because I was hammered by jetlag but also because I really wanted to be clear in my head as to what I thought of my race.  Or non-race as my DNF would indicate.

I don’t have much to say about my DNF other than it was regrettable and certainly was not the way I wanted to start 2011.  However, on the day it was the only choice.  I can say that now that I have been there and seen what is required on that course, I would prepare in a different way than I chose to this season.

Negatives:  I dropped out.  As I enjoyed my descent through the field towards the back end I witnessed some heinous and disgusting drafting infringements in the women’s race.  That left me wondering why they even bothered to put race officials on course for if they couldn’t even assign a penalty to those three. Very not classy racing from women who have been around long enough to know a lot better.  Nice chicks other than a complete lack of racing integrity and luckily they were fighting each other only for the coyote scraps left at the back end of the prize list. (Note:  this might come across as bitterness which it is not at all…their cheating did not affect my day as I was done anyways… and I believe in karma.)

The rest of the trip was awesome.  Chris Lepik has some good race pictures and a recap at http://triathlonmagazine.ca/2011/03/sections/racing/abu-dhabi-international-triathlon-2011/ if you would like any more race coverage.  There is also a video here if you would like to see some clips from the event.

Despite the presence of western style life, there still exists the mystery of middle eastern culture and religious beliefs that I had come hoping to experience.  I still love to think about the adhan, or call to prayer, which would be broadcasted over a minaret to the faithful five times a day.  And although we were tolerated in our swimsuits and trisuits for the race, I certainly felt it appropriate to dress conservatively out of respect of their culture.

In the days following the race we tried to do everything we could.  We visited the Sheikh Zayed Grand Mosque with Ben and Amanda, had gold flaked cappucinos and tea with Jasper Blake at the Emirates Palace, debated buying gold from a vending machine, Ross rode a camel with Jasper, we went to Dubai and saw the dancing fountains, the ski hill, the indoor aquarium, the giant skyscraper, the gold and spice souk and rode a water taxi across the creek to check out the dhows carrying goods over to India and Pakistan.  It was a whirlwind of activity that left us absolutely cracked by the time we crawled onto airplanes to travel for more than a day to get home.  Dubai is like Vegas attractions multiplied by 10.  This includes the price of alcohol..for although it is tolerated it is very expensive. 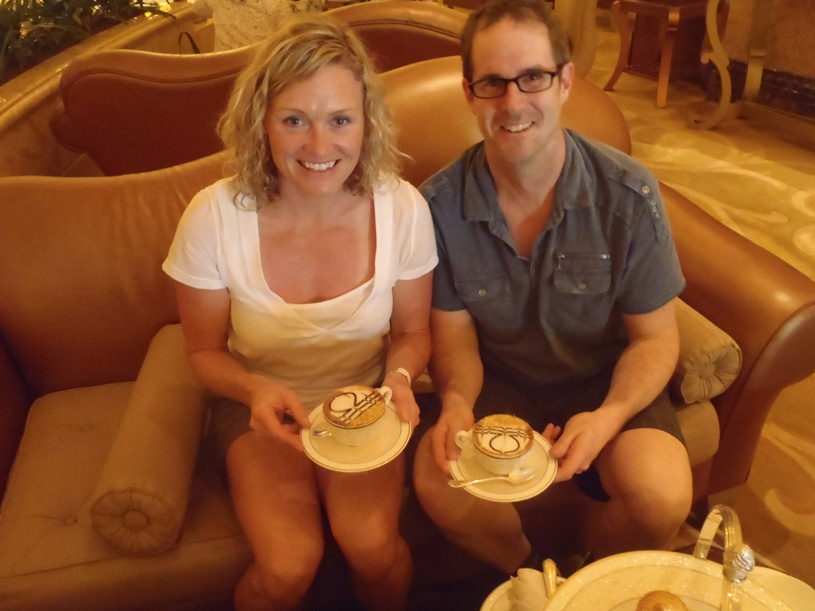 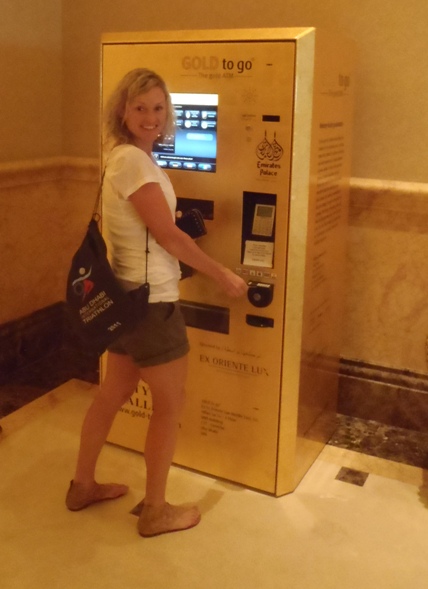 Would have bought some gold if I had won the race…. 🙂 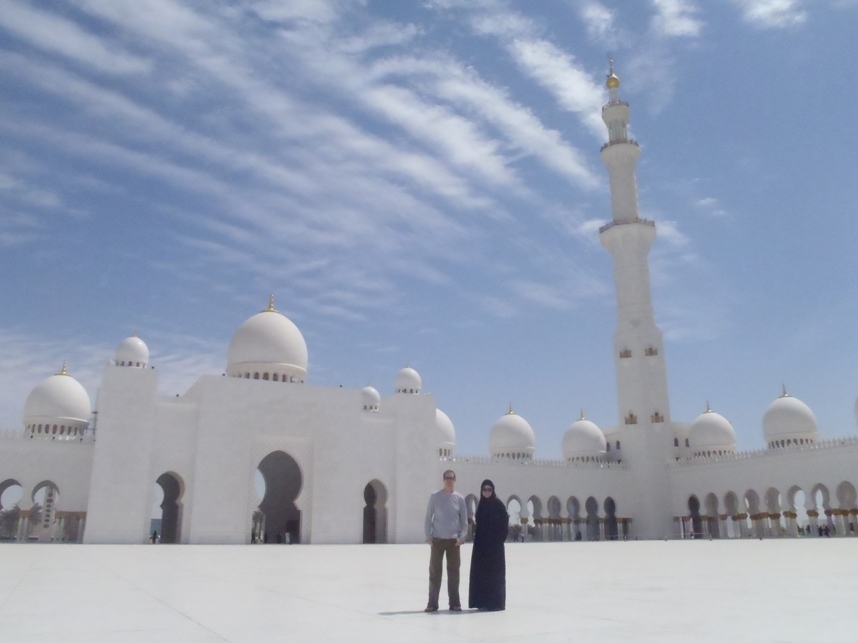 Ross and his modestly attired girlfriend at the Mosque 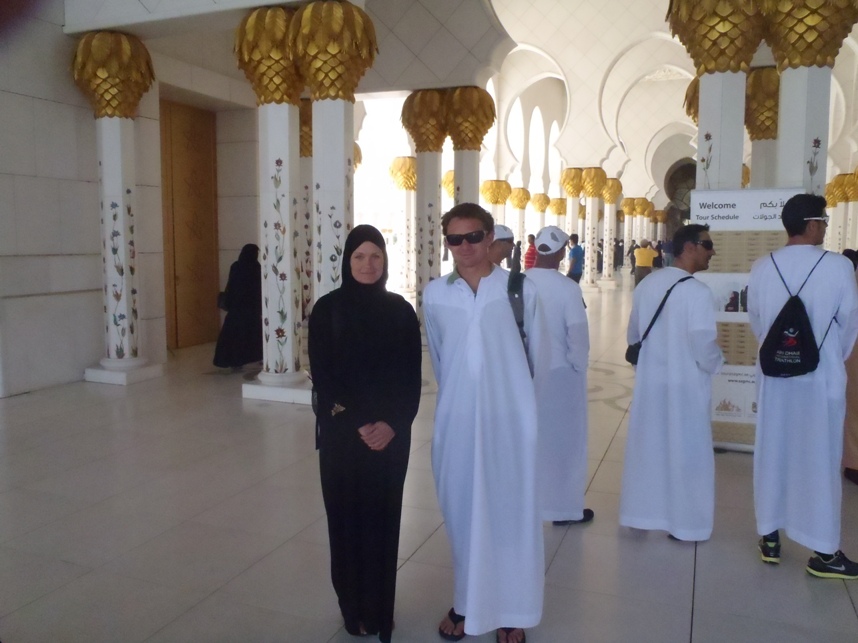 Mel and Ben at the Mosque

It was an amazing adventure and life experience.  This is a race that has to be participated in to truly appreciate.  However, make no mistake.  You need to train as if you are doing an Ironman.  200km is a long way in aero position.

Next up, team camp and Oceanside.  Thanks for reading and see ya at the races!