Ross and I went to Sonoma for me to try my fourth half Ironman.  I was pretty excited since the weather was gorgeous, I love wine country and we happened to find our “twin” couple in Thomas and Diana to stay with in Santa Rosa which made the weekend FANTASTIC!!  Diana made banana bread upon our arrival, has a wicked garden in the back and Thomas is into growing watermelons.  Anyone catching the similarities here?  We were so happy to meet those two.  Thomas even gave me an amazing parting gift:  seeds for Hokkaido Black Watermelon, which if I can grow them next year I could sell them for something like $10,000 a melon!  Thanks Thomas!

After an easy spin in Sonoma, being late for the pro briefing, hanging around while Ross was drinking some wine at the AVIA tent, and setting up my bike-Saturday was a wrap.  I made one of Ross’s favourite dinners for Tom and Diana (a caramelized onion/radicchio/spicy sausage number with rice pasta) and went to bed early.  Unfortunately, that didn’t matter because my cough plus Ross’s cough meant we got about 3.5h of sleep for the second night in a row.  Stupid summer colds.

I was up at 4am to be somewhat awake for race start.  For once, Ross was moving slower than me in the morning and dragged his butt out of bed at 5 am and being the trooper he is, he loaded the bikes and got us out the door.  We were late.  I was at the venue putting on my Profile wetsuit with 5 minutes to go when I discovered it was a non-wetsuit swim.  Oops!

So then I swam/biked/ran the best I could.  I ended up 4th which was below what I wanted to get but the women’s field was very tough.  There were a lot of girls that I knew were going to be tough to beat that finished behind me so I did well.  I only think my race was bad because my run was beyond horrendous.

For a “bad” race I have to be happy with the result.  Some of my objectives were met so I am satisfied with that.  Those include:

1.  Coming off the bike first!  Thanks Specialized and Shimano!!  (Yay! I had the lead cyclist in front of me for TWO WHOLE MILES.. haha!)  Thank you Bill at Procity for the killer bike fit to make me go mo’ betta!
2.  Testing my limits a bit on the bike.  More on that later.
3.  Going for a win. Even if I went down in flames I wanted to try to win.
4.  Winning some wine!  (only one spot more got a magnum and first got a DOUBLE magnum. DOH!)
5.  Having a crapload of fun.

With athletes like Mirinda Carfrae and Leanda Cave present, a win or even a second was going to be a breakout race for me of epic proportions.  Since Mirinda was a handful of seconds off outrunning men’s winner Chris Lieto, that was not going to happen for me with only a 90s lead off the bike.  However, running for a solid third, dangling off Leanda, with a 3.5 minute lead on fourth at the 10km mark was the kind of race I was looking for.  Only, it didn’t happen because of a catastrophic explosion at the 10km mark.  I lost a minute in ONE mile.  I am not sure what happened at the winery turn around but it was weird. I was sick with a respiratory infection leading up to this race which may have caused my mega bonk, or I didn’t eat enough or I went too hard.  Those are the options to explain the result.  I wasn’t going too hard so that wasn’t it (my hr was well within limits) so it was one of the first two candidates.  Regardless, my next race could be better and I will try more food and better health.

1.  I am slow relative to my cycling ability on the flats.  That is weird given I am not a tiny climber.  I took a full minute in like, 2 miles on Chalk Hill, but struggled to pass in flat sections.  And, lost my minute in the flats leading to the finish.  That needs work.  I also was confused in where we should go coming into the finish since we were short some marshals but that doesn’t excuse my weakness in power sections.
2.  Eat more.  A lot more.  In fact, this lesson will be transferred to XTERRA.  I need a feed bag from Nathan asap.  Picnics at all future races.
3.  Be more aggressive in swim starts.  I lost my place due to a lack of oomph off the start.
4.  Be early!  This is not a shocker but I was late to fit a good warm up in.  6:30am is waaaaaaaaaaaay to early to start races, IMO.  Not an excuse though so I need to be more early birdish.

So after the race the true fun started.  We went directly to Raymond Vineyards to start two days of luxury accommodations and good times.  Our first night we enjoyed a reserve Chard out in the chestnut orchard next to the pool before driving to Napa to eat at the funky new pizzeria Oenotri.  Delish!  The next day I ran like an elephant for 45 minutes while the boys (Ross and our friend Todd) went riding and then splashed in the pool.  After a trip to Oakville grocery for lunch we went tasting at Heitz (one of my favourite vineyards) and then gussied up for dinner at Bouchon.  We enjoyed a 1984 Raymond Cab that night along with my Truite aux Amandes.  Oh, and frites!  Get the picture, yes life is good.  We followed that day up with a 2.5 h ride in Calistoga with a climb up Deer Park Road and down Old Howell Mtn road, a tasting at Cakebread Cellars (Vin de Porche, yum and the 1999 Dancing Bear Cab, mmm) followed by a trip back up Deer Park to Burgess Cellars.  Burgess is another one of my favourite wineries and our afternoon with Steve Burgess was killer.  If you don’t know that wine you should definitely get to know it.  Not the showy, marketed crazy kind of Napa Cab, just solid, delicious, well crafted stuff that you have to know it to get it.  Love it!

Then we went back to Sonoma for an evening at De Loach Vineyards, a ride the following morning with Lisa Heisinger (general manager at De Loach who is a very accomplished triathlete) followed by a drive back to San Francisco to fly home. 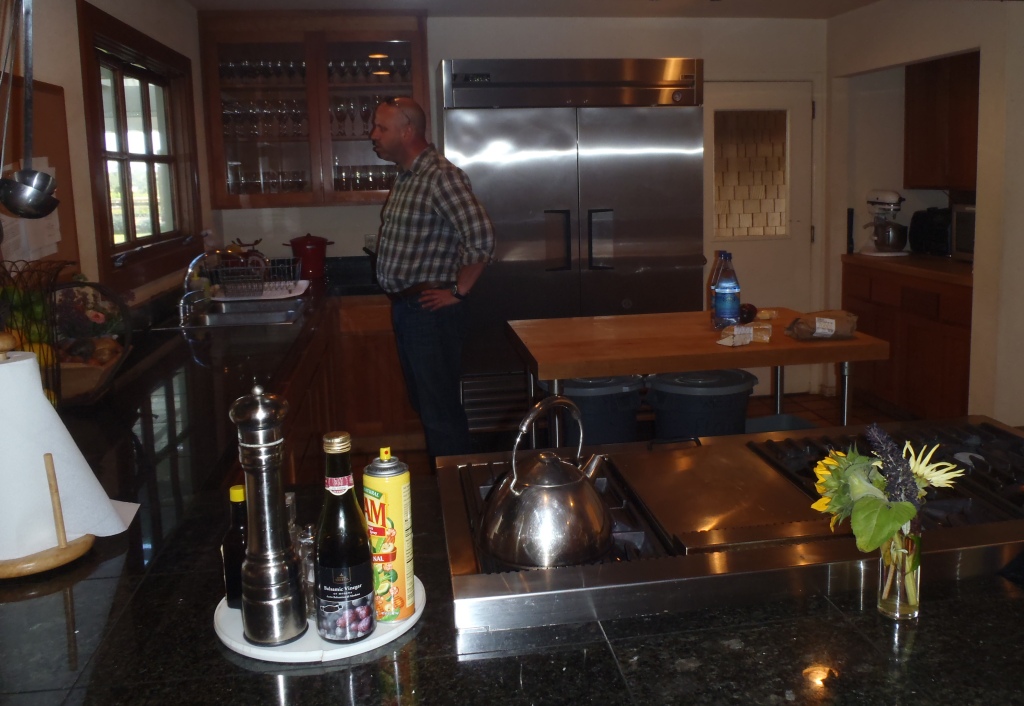 Todd in the gourmet kitchen at De Loach Vineyards.

Phew, did you get all that?

So much fun.  Looking forward to the next shot at 70.3 in Lake Stevens.  See ya there!