The last recipe in our butternut squash series will likely fool even those most adverse to the squash itself.  Basically, the squash is sliced and roasted before being laid as a layer in a lasagne dish.

The lasagne I make doesn’t really look like the one my mom used to make.  The soggy noodles, mushrooms, and ricotta cheese really made me want to gag when I was younger and I was never really a fan of the dish.  This lasagne is a little different.  I took guidance from a recipe from Jamie Oliver before adding and subtracting to come up with this one.

If you really love goopy cheese in your lasagne, omit some parmesan and add mozzarella.  Although there is some “white” sauce in this recipe, it removes some of the cheese that you might use so I think you end up equal in terms of fat content.  You can use light sour cream mixed with skim milk rather than creme fraiche but the texture will definitely not be the same.  In fact, if you are really adverse to using creme fraiche as a bechamel sauce then I would just do extra layers of meat sauce with some ricotta and call it lasagne.

If you are like me and aren’t adverse to a little bacon, meat and creme fraiche now and again, read on but be forewarned!  This is TIME CONSUMING!!!  Especially if you are making your creme fraiche which I recommend because it is stupidly expensive and hard to find and very, very easy to make.  The creme fraiche needs 48 hours to be good to go.  So here is a schedule for you:

Saturday night:  make meat sauce in a double batch, serve half on a bed of braised greens, put the other half and the creme fraiche in the fridge

Read on for the recipes:

500 mL whipping cream (or half and half)

Pour your whipping cream or half and half into a jar with a lid.  Add two tablespoons of buttermilk.  Cover and leave for 12-24h on the counter. 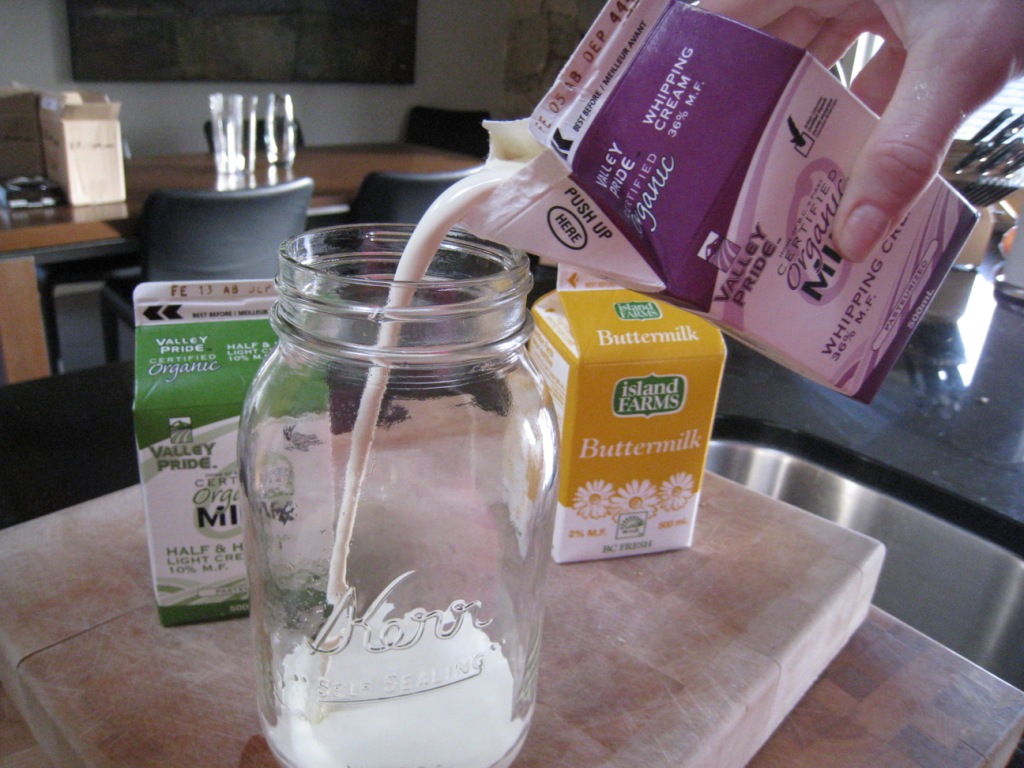 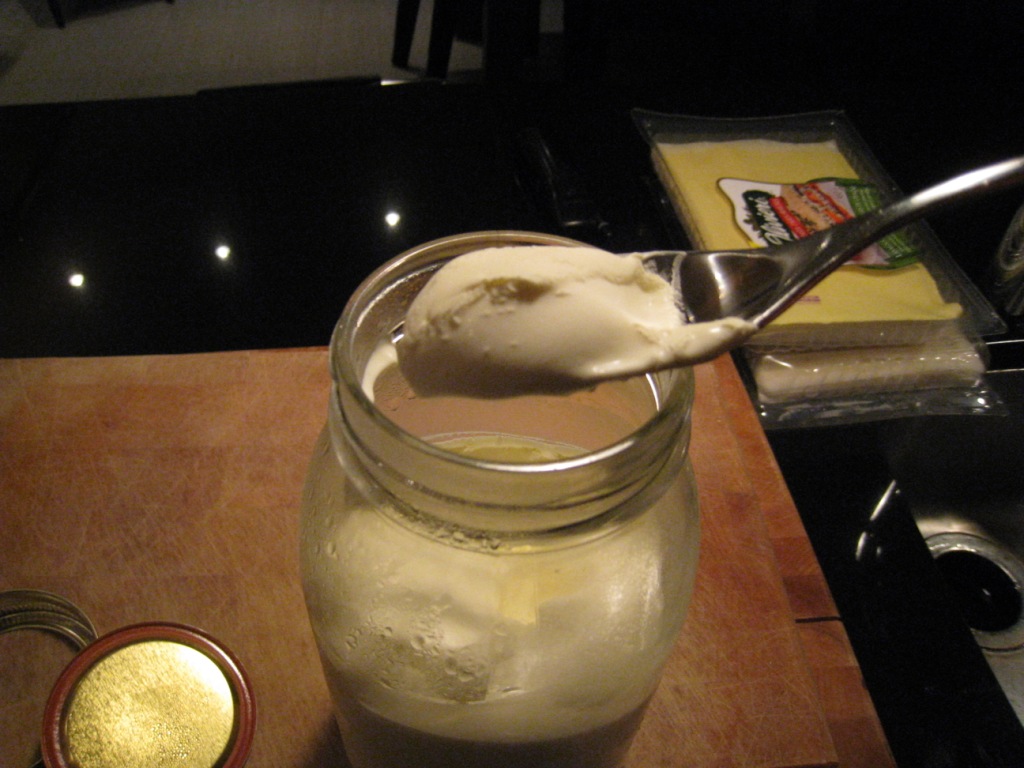 For the meat sauce you will want a large, heavy bottomed Dutch oven style pot with a lid.  Put chopped bacon in the pot and saute with the cinnamon until brown. 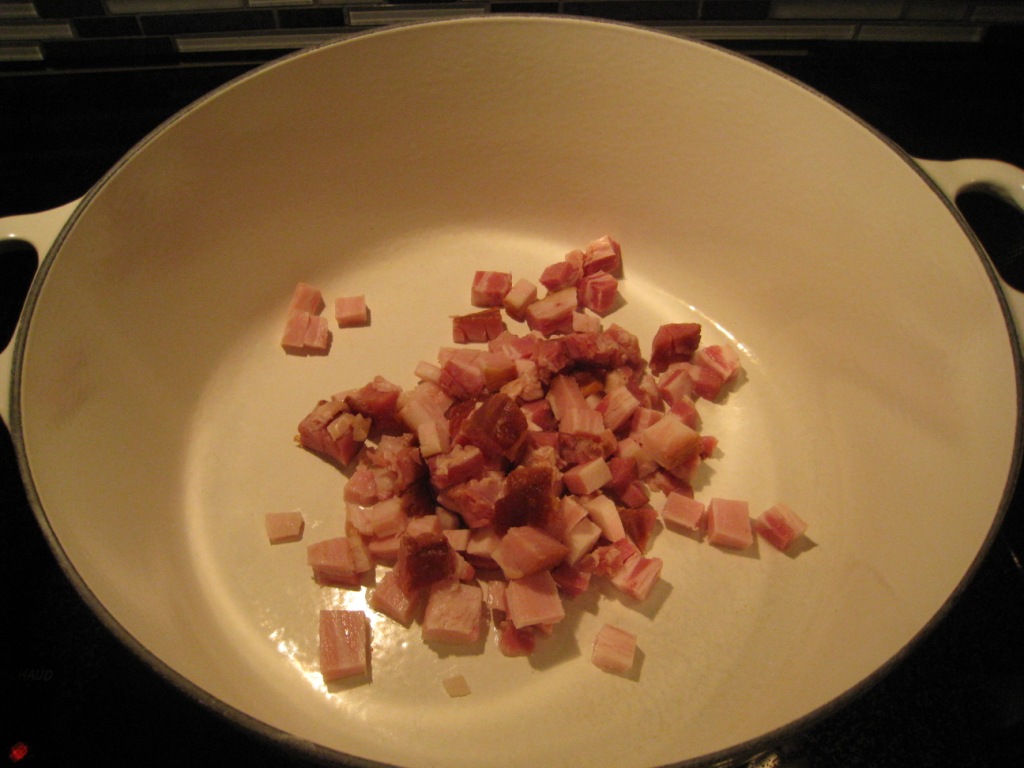 Add the chopped onions and garlic and cook until soft.  Cut the stewing beef into small pieces and add to the pot with the bison. 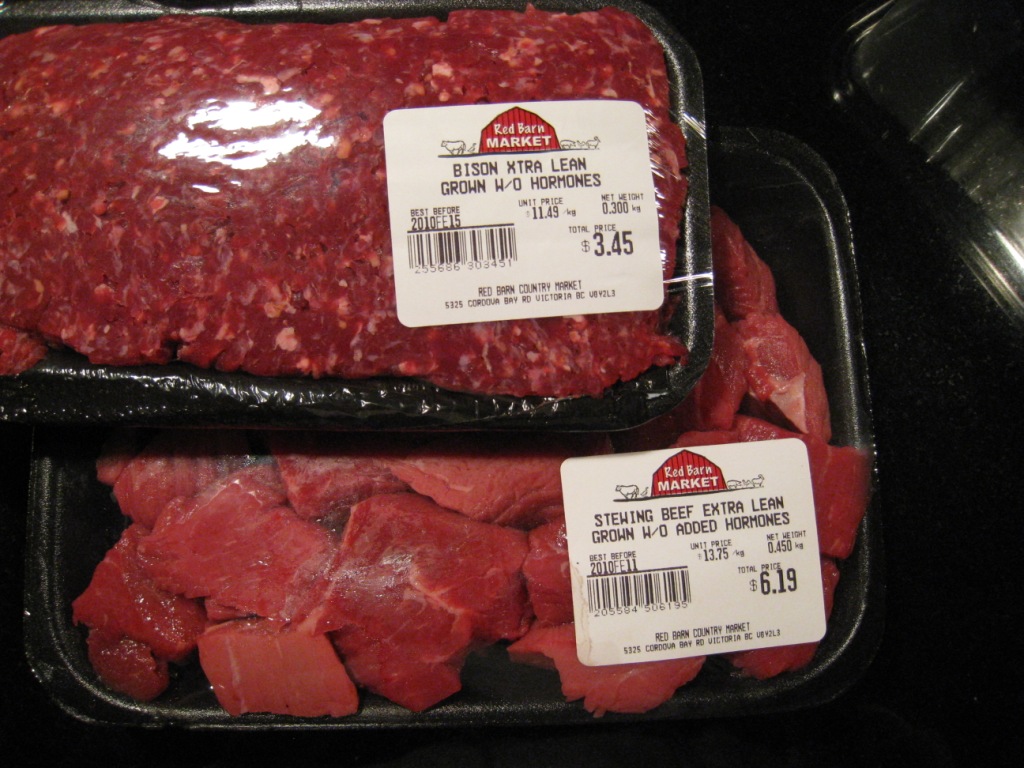 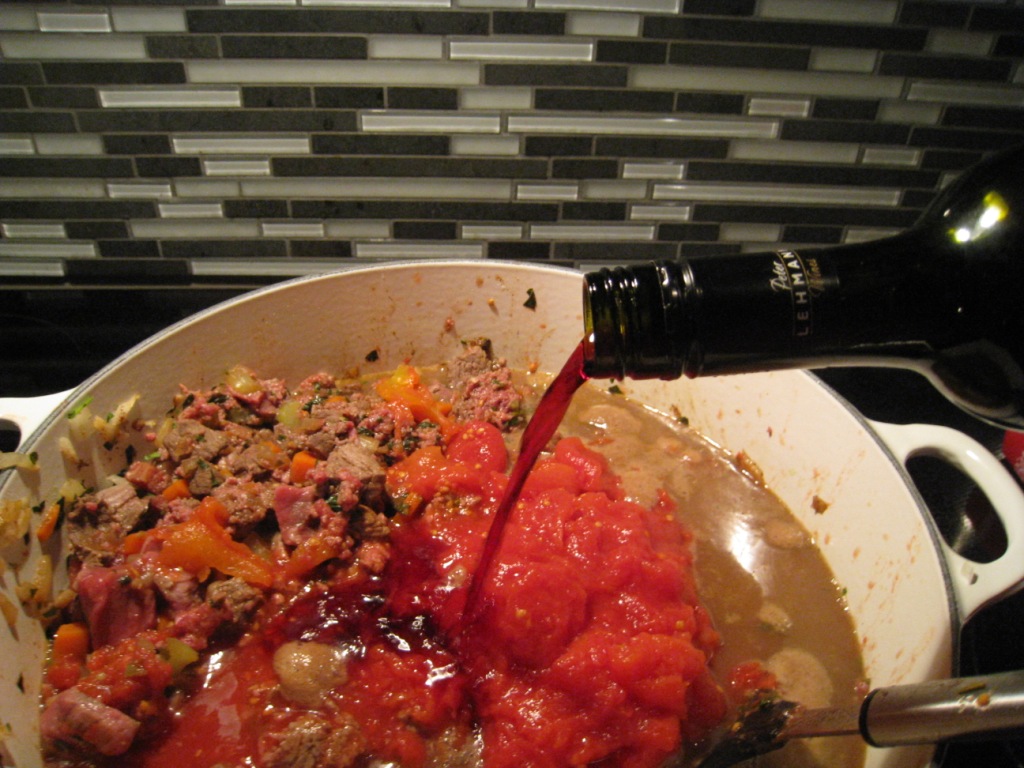 Replace the lid.  Simmer on the stove top or place in the oven at 300 degrees for 2.5 hours. 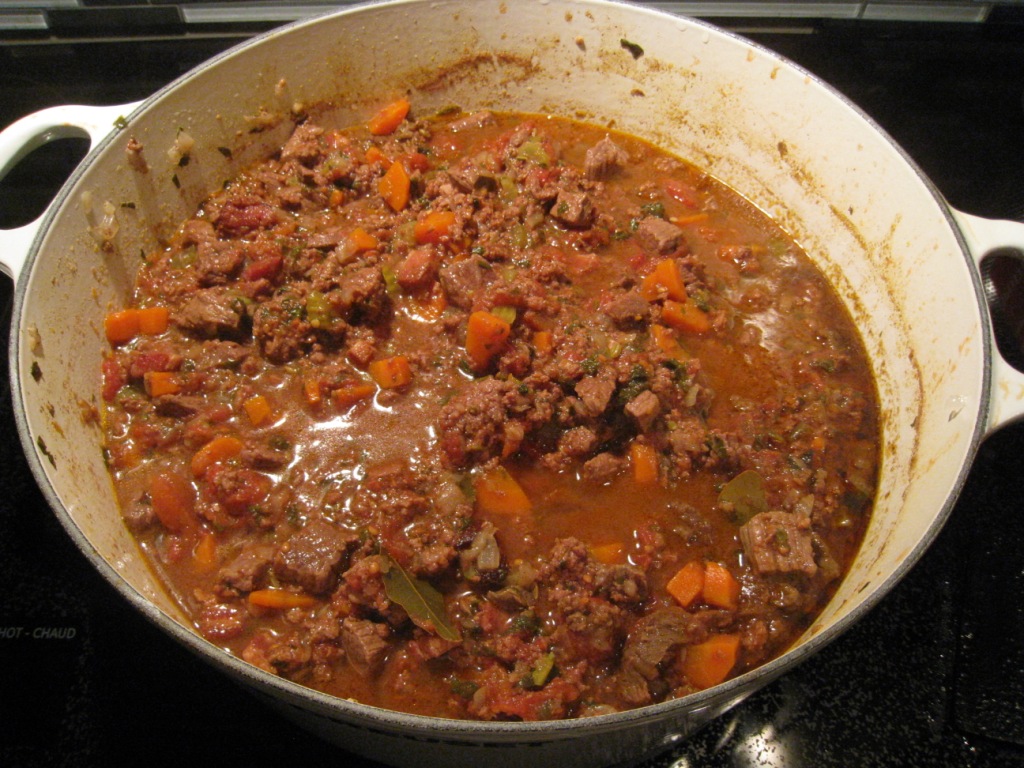 You will be left with a big pot of yummy meat sauce, double what you need for the lasagne.

You can choose to roast the squash in advance at this point as well.  Peel, deseed and slice the squash into happy faces.  Toss with olive oil, cumin, red pepper flakes and black pepper in a large bowl.  Transfer to a roasting dish and roast for 45 minutes at 400 degrees F until soft and browned.  You can leave this overnight in the fridge. 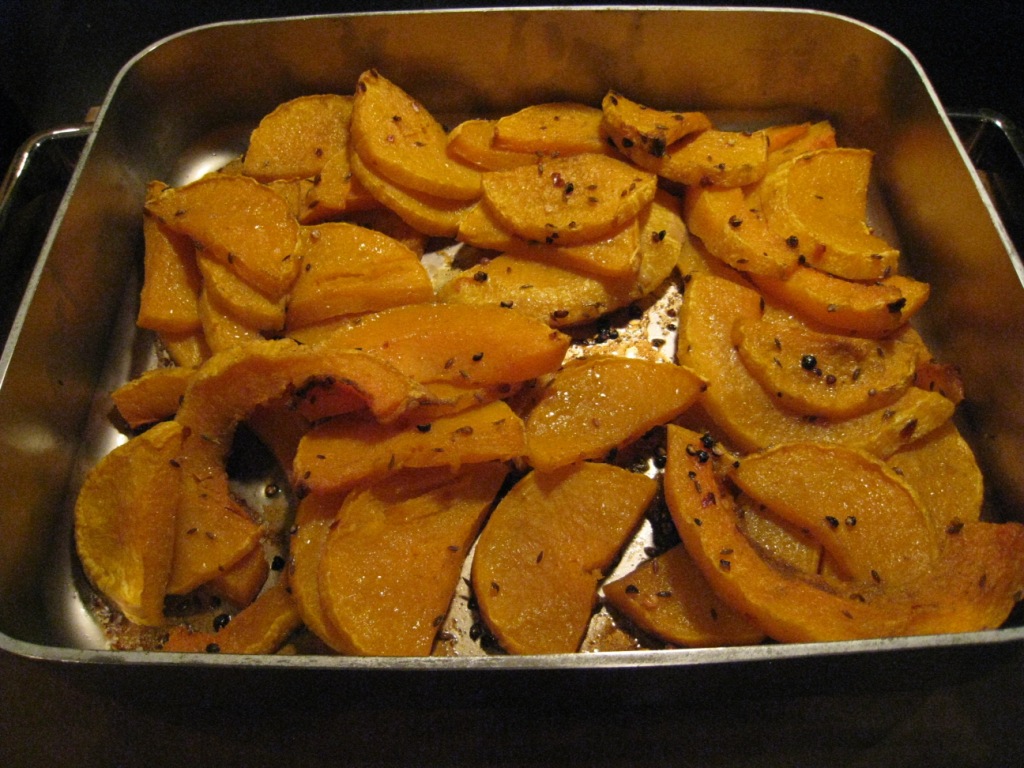 Wipe your lasagne dish with a bit of olive oil.  Place a layer of fresh lasagne sheets on the bottom with the noodles rising up the sides of the pan (this keeps hot pieces together when you serve!).  My dish is a weird shape for lasagne so it isn’t the best example of how to do this since it is wide and shallow.  A more narrow and tall shaped casserole is more traditional for lasagne.

Mix your creme fraiche with a cup of shredded parmesan, salt and pepper.  This is your “white sauce”.

Spread a layer of meat sauce on the pasta, then a thin layer of the white sauce, and finally a layer of chopped greens.  I used beet greens this time around. 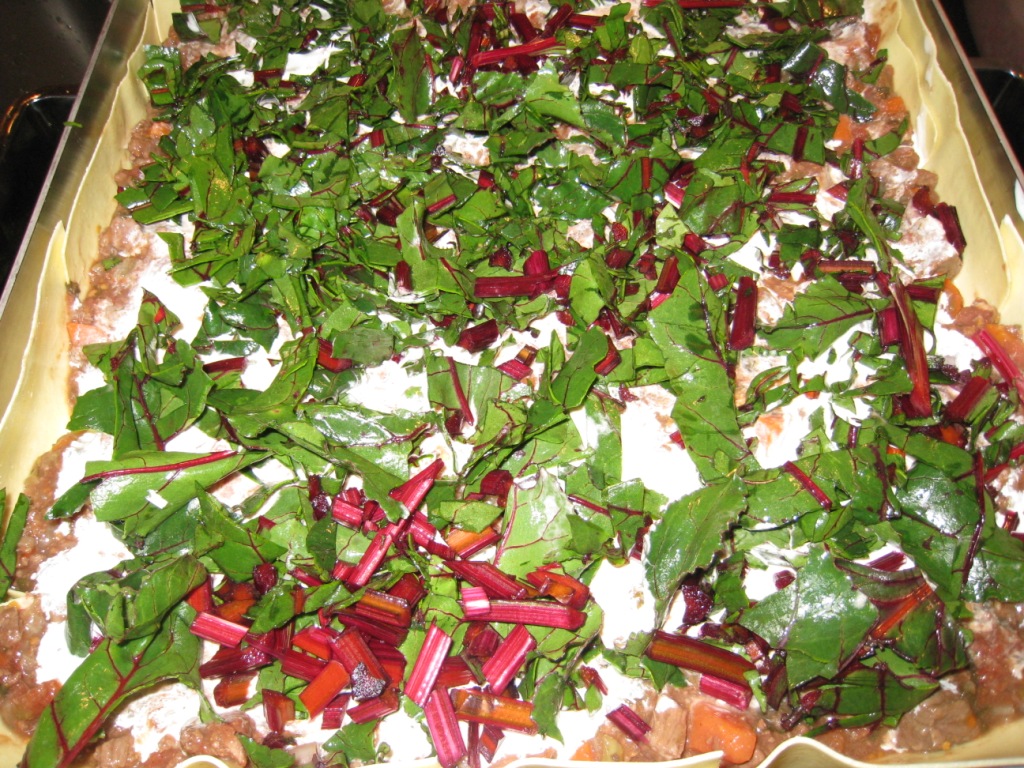 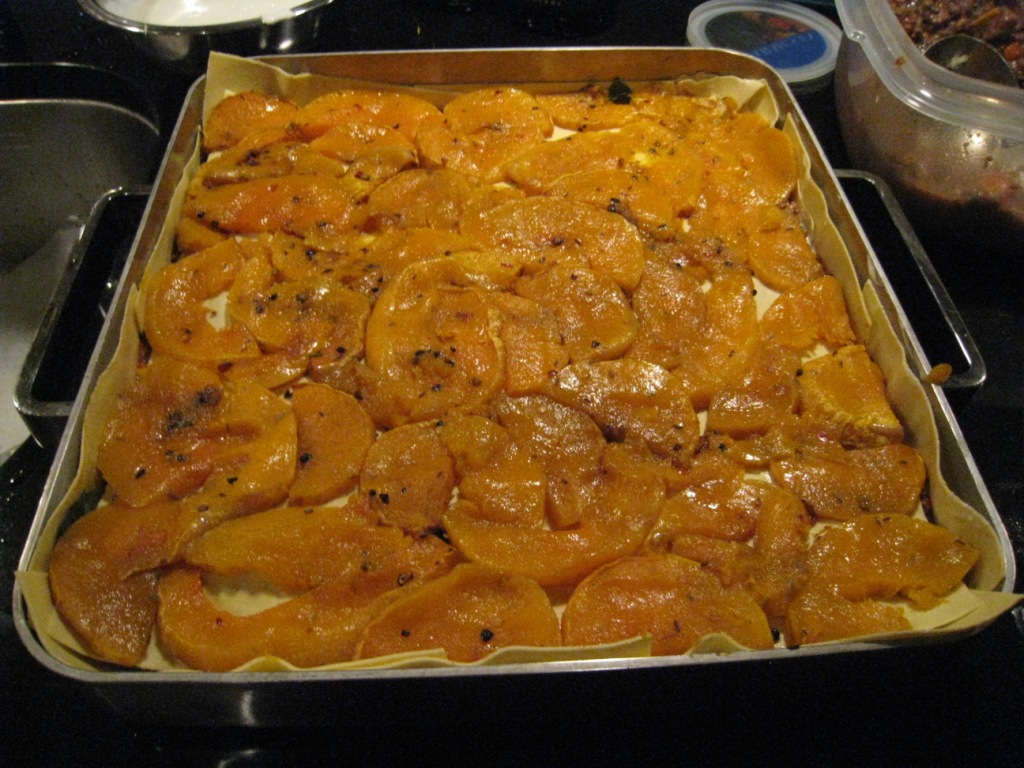 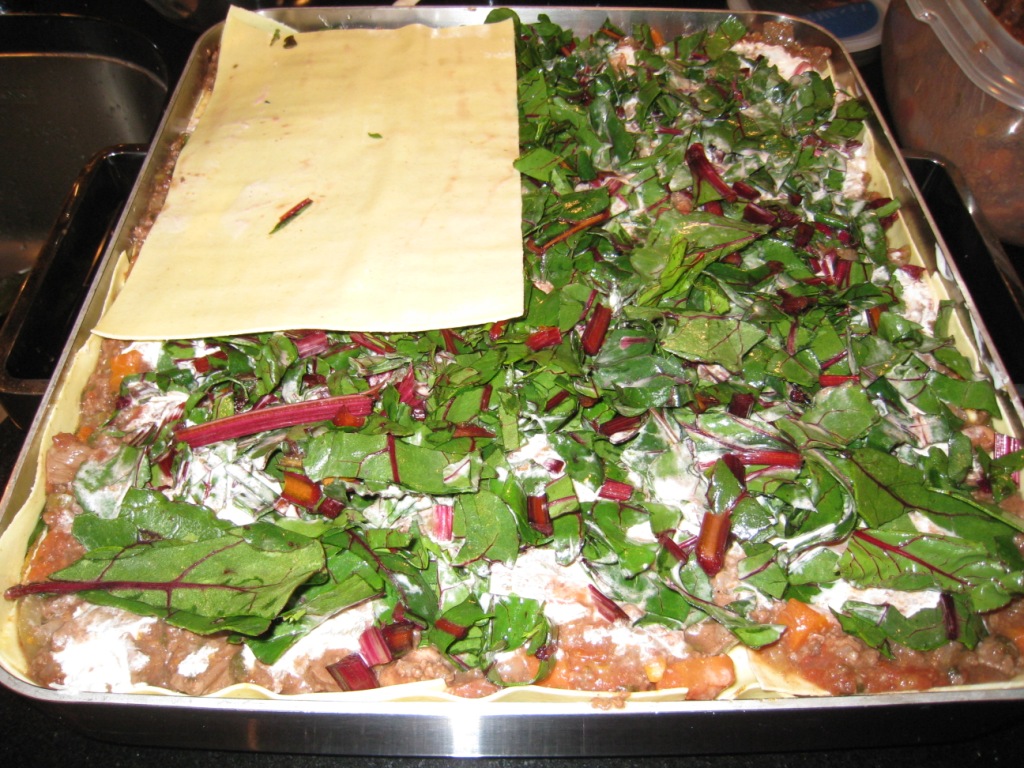 Finally, on the top layer spread the rest of the white sauce.  Slice the fresh tomatoes thinly and place on top along with shredded basil and the rest of the shredded parmesan or some shredded mozzarella.  Done!  A glass of chianti and you are good to go. 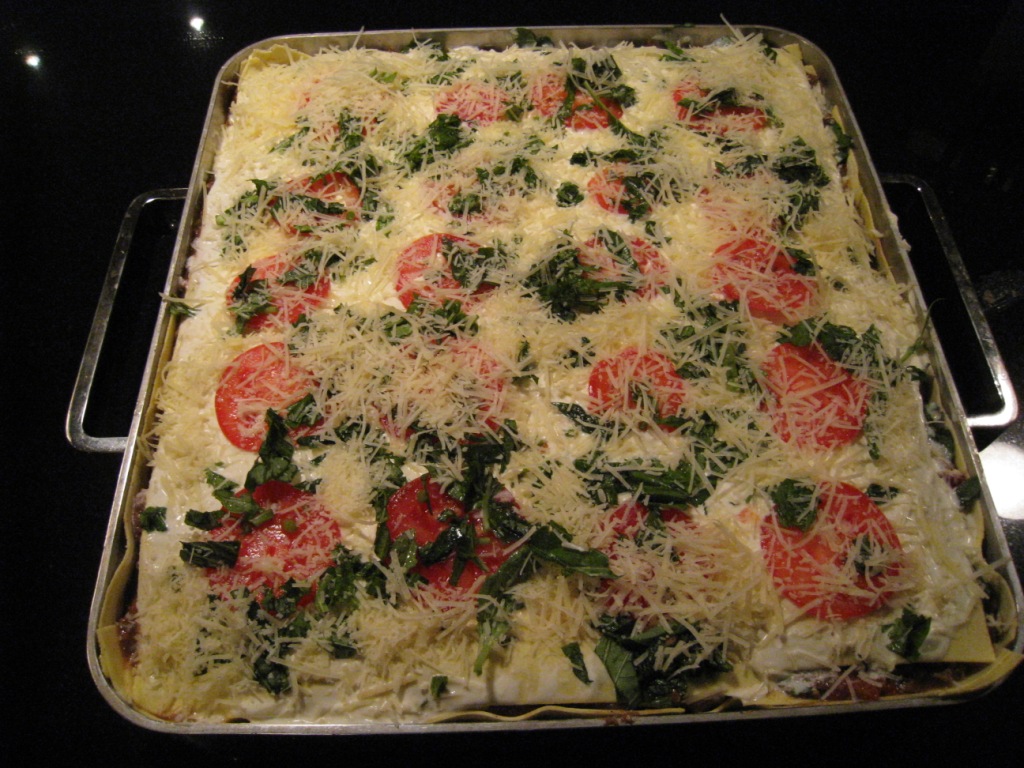 Sorry, my camera settings were crap for this cooking episode.  No flash or something.

Bake in a 350 degree F oven until brown and bubbly.  This lasagne freezes AMAZING so you can slice it into individual servings and freeze seperately for a quick lunch after a long, freezing cold ride in the winter.