Our second installment in the butternut squash series requires some bravery in terms of strange uses for ingredients you may have heard of but not truly enjoyed in the past. 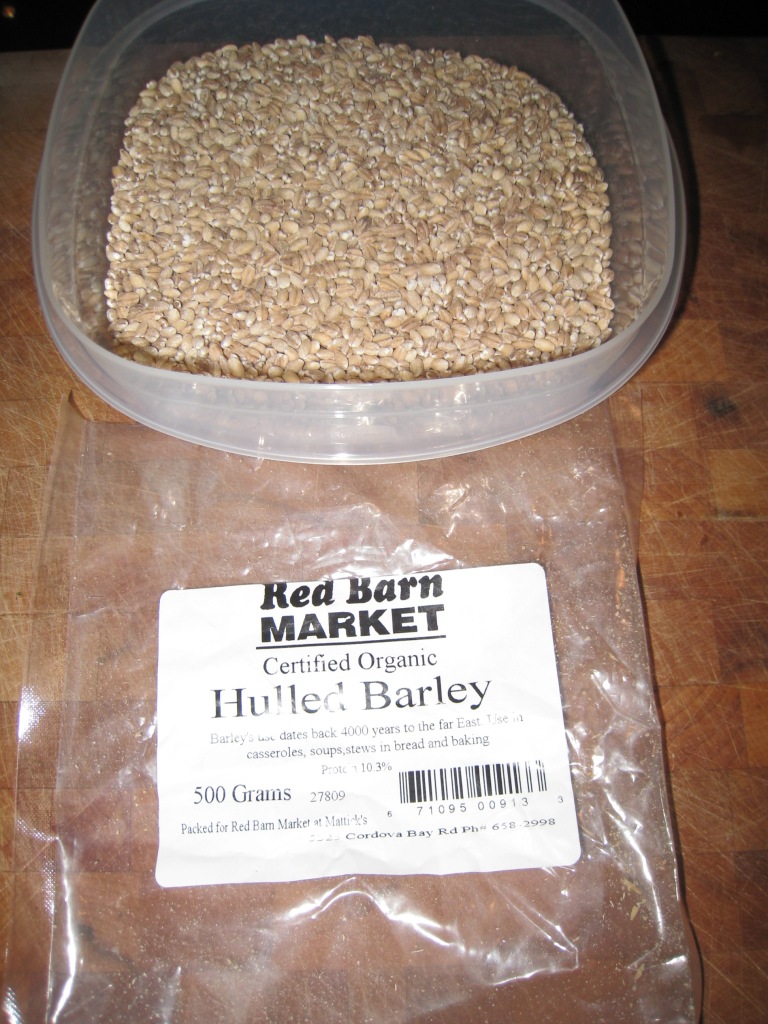 Barley for me often evokes memories of flavorless, goopy white bits in an unpleasant beefy flavored broth from a can.  However, I am open to trying new things.  I first made barley as risotto when it was suggested as an alternative grain to rice and I have found I enjoy the barley as much, if not more, than the original Italian-style risotto.

When you make this recipe, you will enjoy barley as a nutty, chewy grain that holds its own amongst a rainbow of other flavors and textures in this risotto style squash dish.

So without prejudging, I encourage you to try this with barley but I am offering you an exit strategy as this dish can easily have the barley substituted with arborio rice, quinoa, wild rice or even in a pinch, cooked pasta.  The liquid portion of the recipe should be adjusted to reflect the grain you choose but will be identical if you switch the barley with arborio rice.

Start by peeling and roughly chopping the squash into cubes. 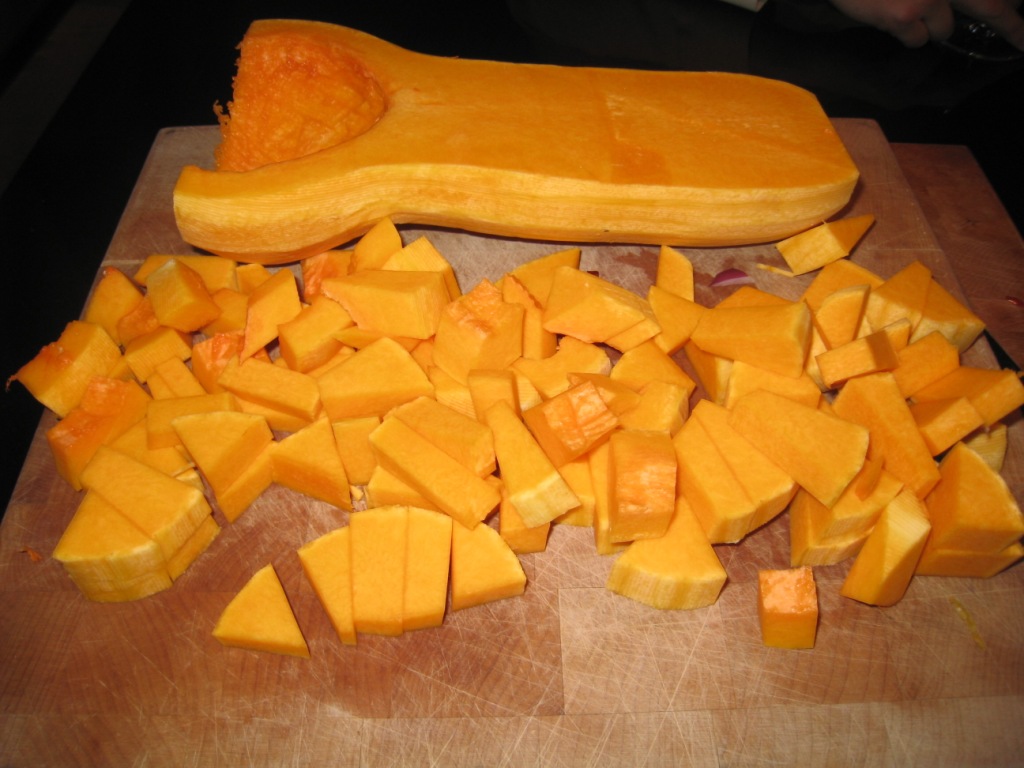 Place the squash in a roasting pan and toss with olive oil, red pepper flakes, salt and pepper.  Bake in a 400 degree oven until soft and golden.

If you are doing the sausage recipe as well, you can throw them in shortly after at the same temperature. 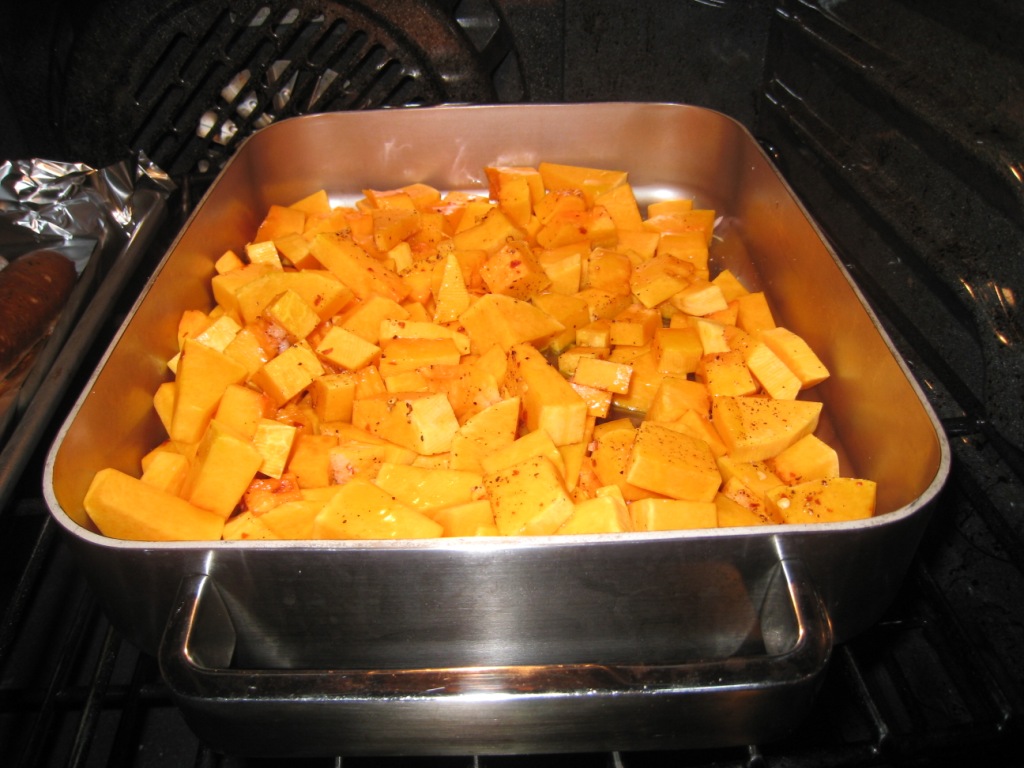 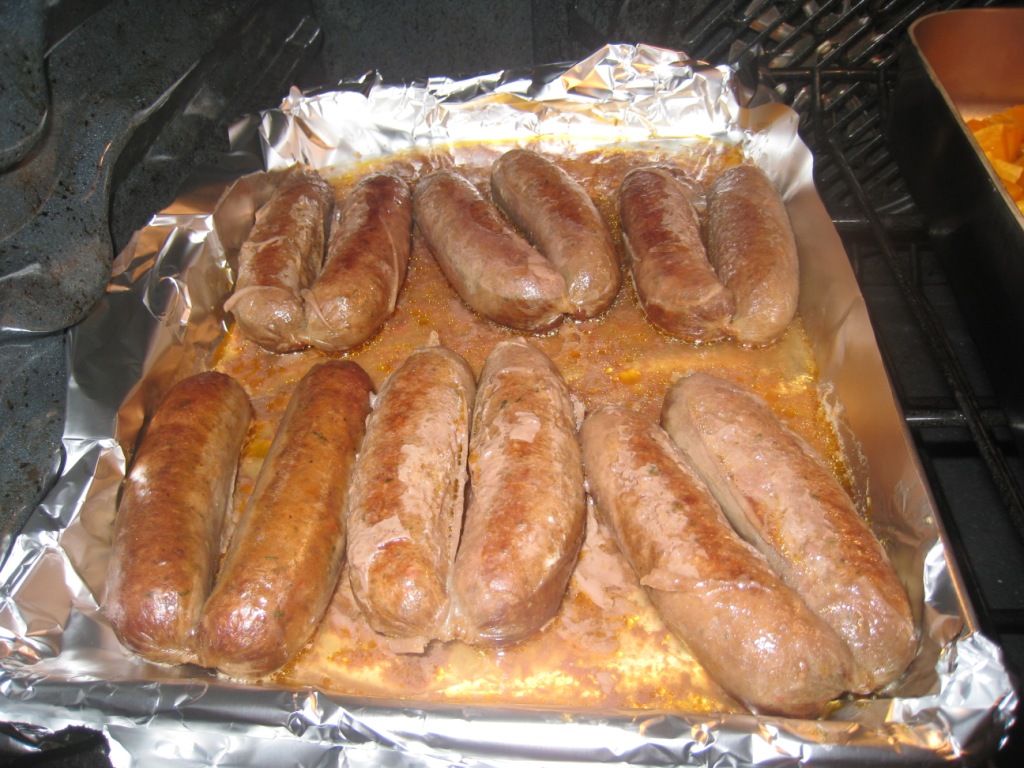 While all of this is baking in the oven you can prepare the barley and the caramelized onions.  First, using a heavy bottomed pan (I like cast iron) dry roast the barley over high heat (no moisture at all!) until it starts to crackle and you can smell the toasted grain.  Toasty is BROWN not BLACK so keep an eye on it!  Once you start to hear the grains popping you are probably finished.  Then place the grains in a medium pot and put 2 tbsp (or more) olive oil in the fry pan.  Over medium heat, cook the sliced onions until golden.  The idea is to cook the onions for a really long time while stirring.  You should be able to leave them for 2-3 minutes, see that the ones on the bottom are brown, not black, and cook them some more.  Ideally, the pan of onions slowly browns over about 15-20 minutes. 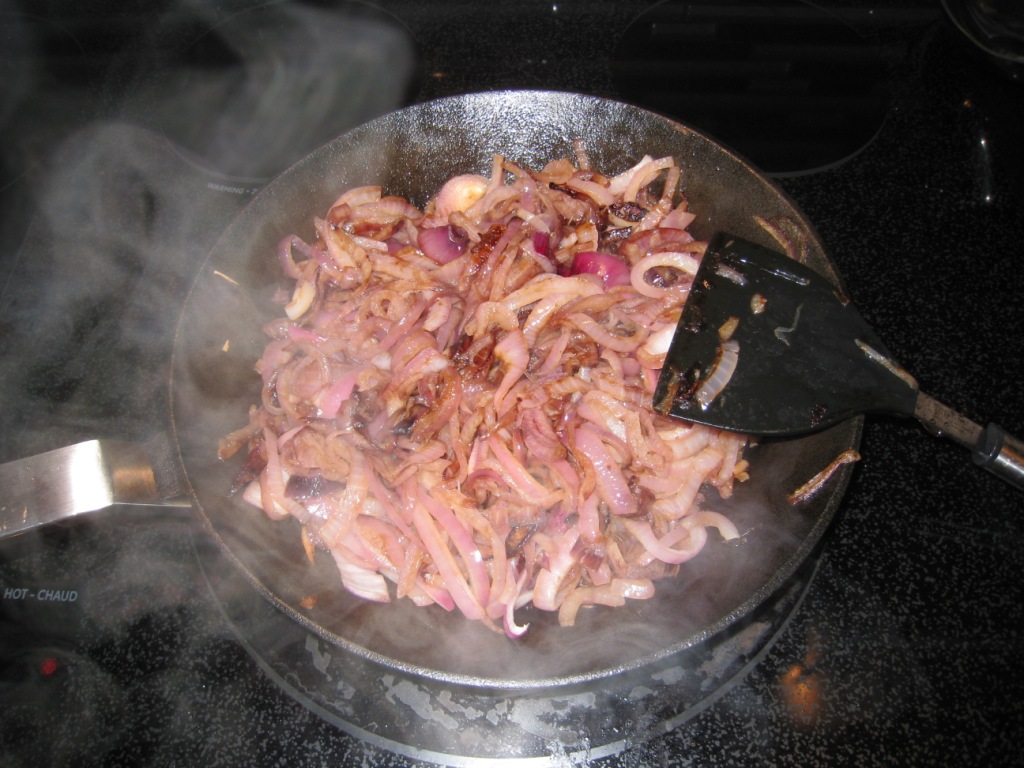 Then put the broth into the barley all at once, bring to a boil, then simmer until all of the liquid is absorbed.  In the meantime, place the hazelnuts in a dish in the oven to toast for 10 minutes.  Once toasted, crush them with a mallet until they are roughly chopped.  Wash thoroughly and roughly chop the chard. 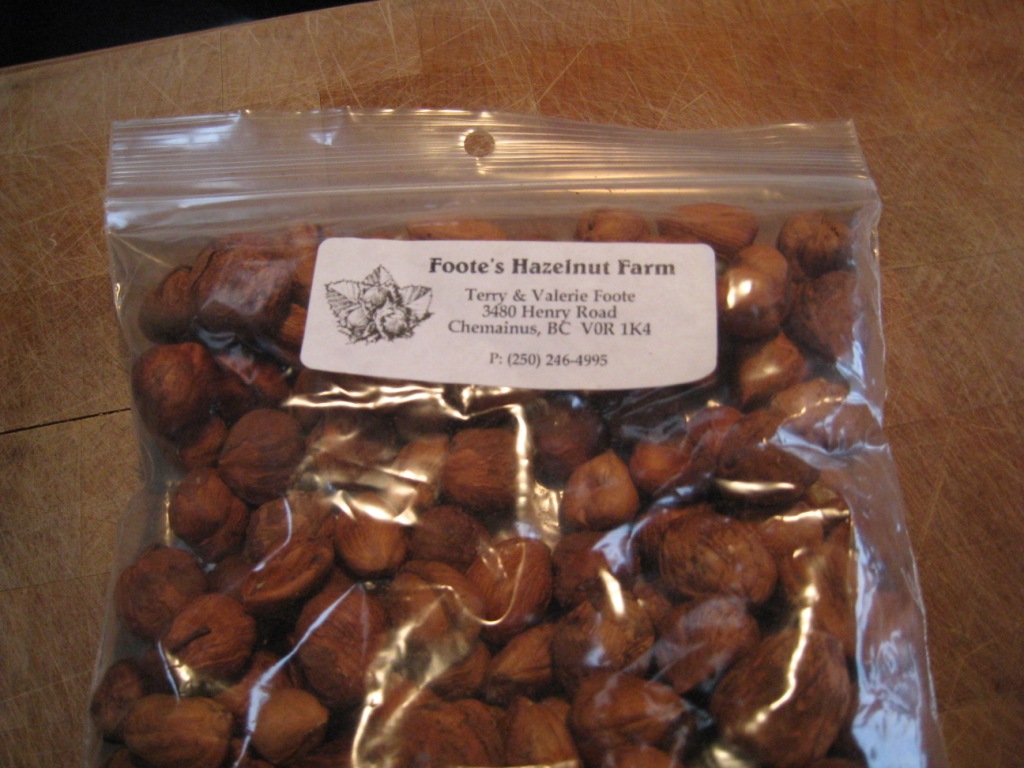 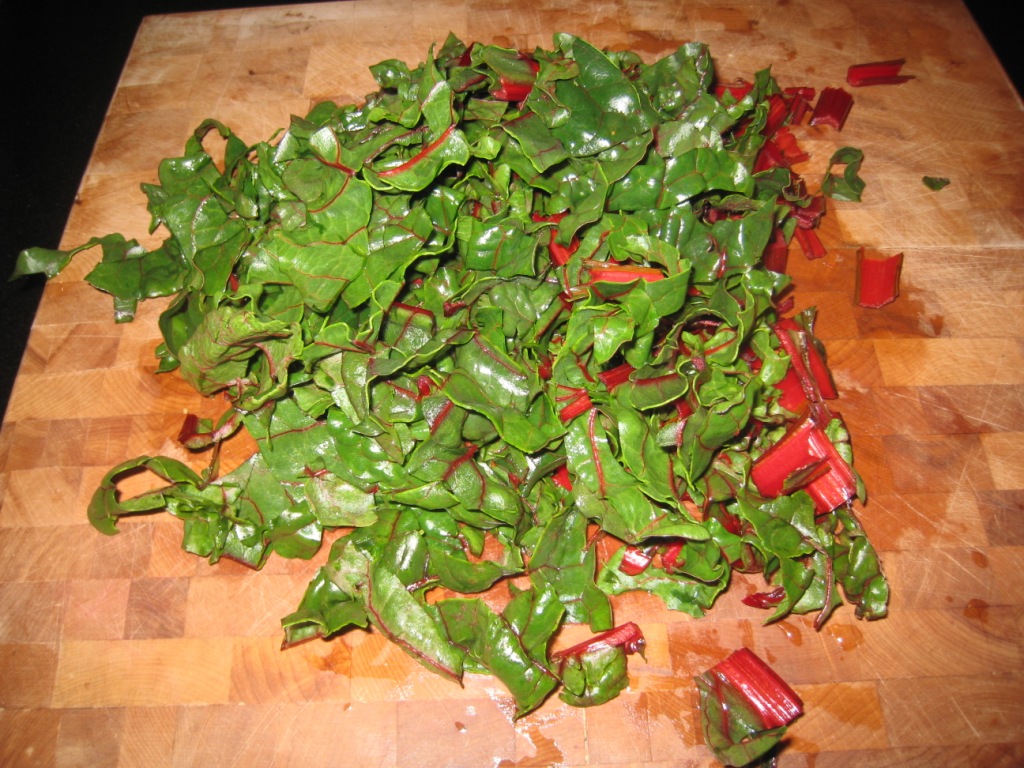 Chard is really easy to find in cool, mild temperatures like in Victoria.

Once the liquid is nearly all absorbed in the barley, add the hazelnuts and the chard and stir.  Cook for 3-5 minutes to cook the vegetable then add the roasted squash to the dish. 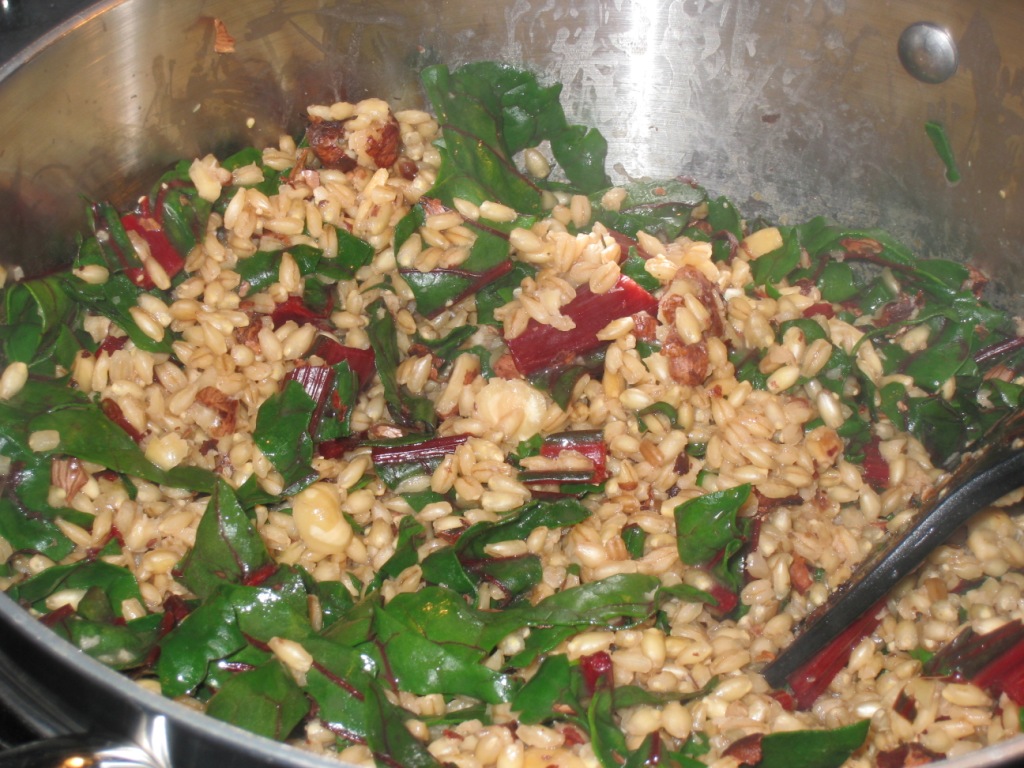 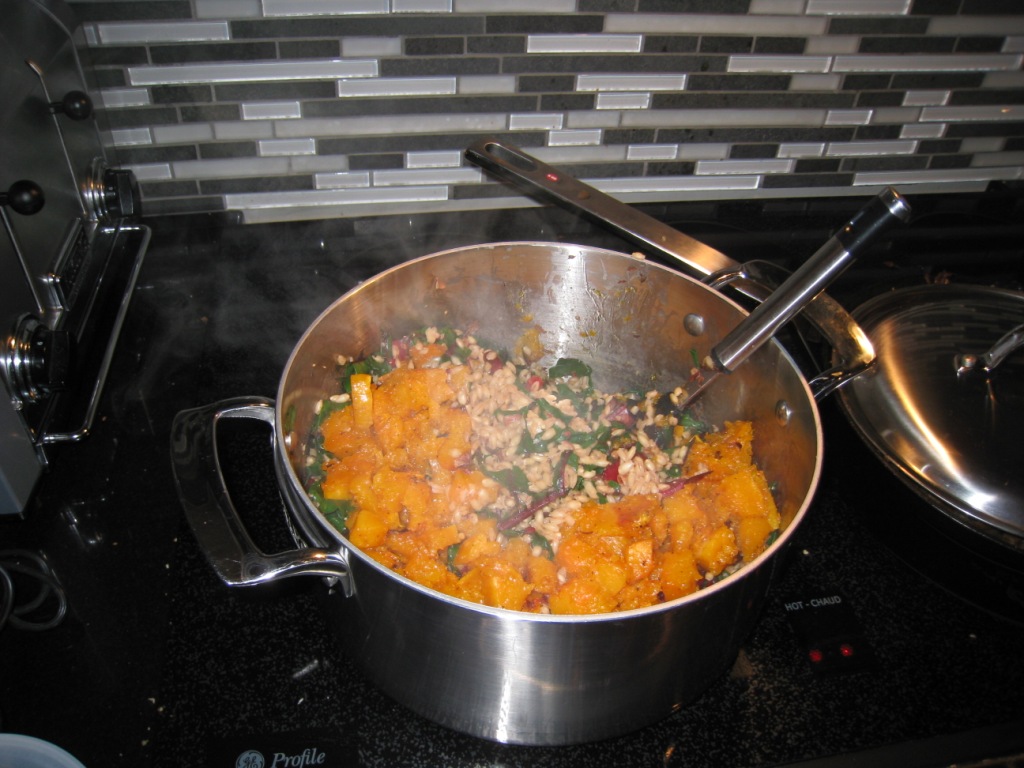 I finished the recipe by stirring in the parmesan cheese and garnishing the top with a bit more shredded cheese. 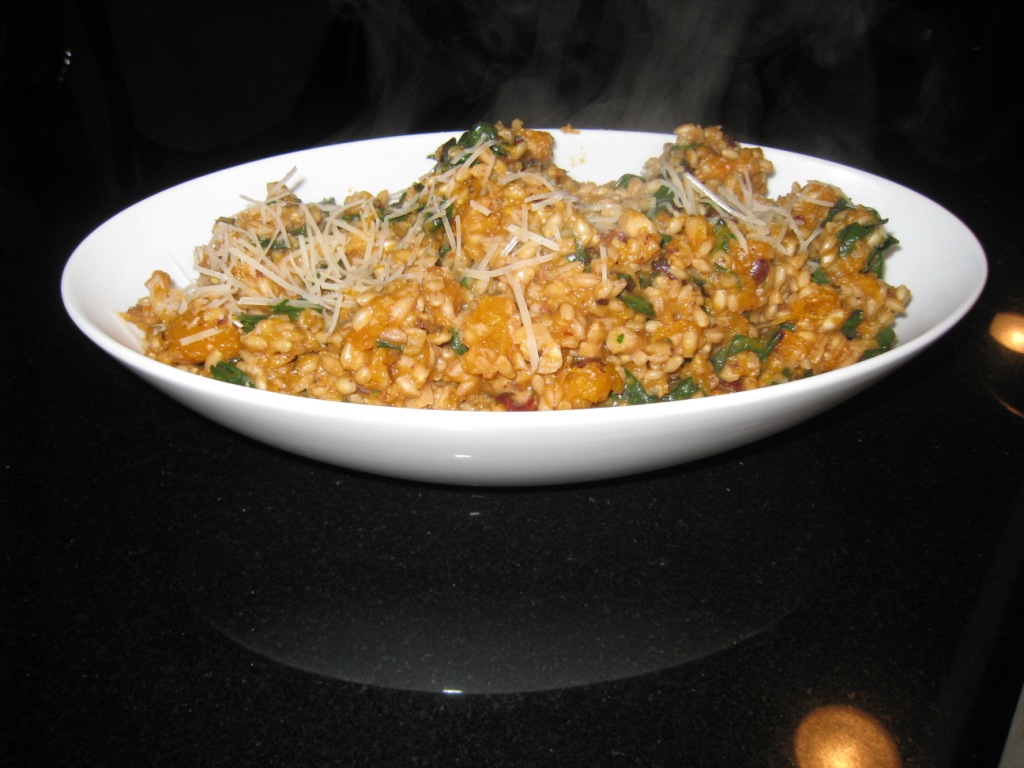 Finish the sausage dish by slicing the cooked sausages and stirring into the caramelized onions. 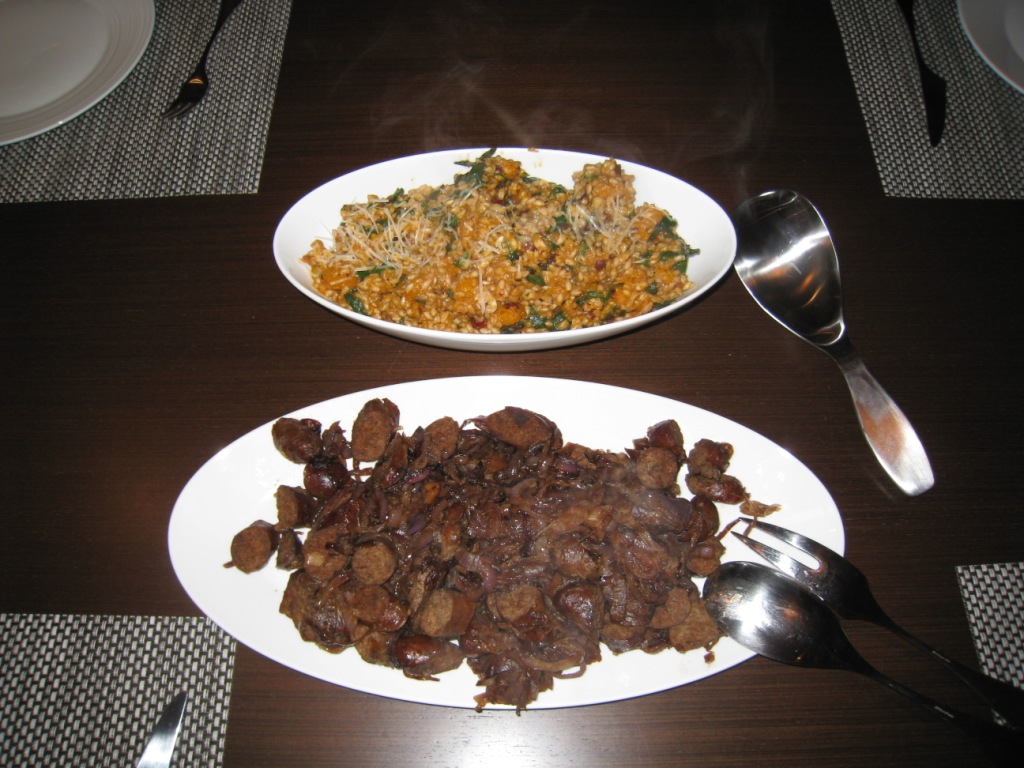