My second attempt racing a full distance Ironman distance was at Ironman Arizona.  I had the privilege of having my ass handed to me by Meredith Kessler after I finished in 9:14, a time that might have been respectable 5 years ago but was in another time zone behind MBK’s 8:44 (the fastest Ironman performance of 2015-so amazing!).  It is good I was on the course with her that day.  It is invaluable to have that performance to shine a light on where I can improve.  Without comparing apples to apples, you never really know where you stack up and I was good in my second attempt but I still need to improve.

Having the race under my belt means I know exactly where I am at and I would like to thank Meredith Kessler, Amanda Stevens and Julie Gajer, the women’s top three, for an amazing day at the races… it was so much fun and exciting to race with you.  Special shout out to Michelle Vesterby, with whom I spent a large chunk of the day in Arizona and congratulations to all of the finishers on that crazy day.  I think I attract freak weather systems.  I was 7th which in a race with so many fast girls is good but I’ll be better. 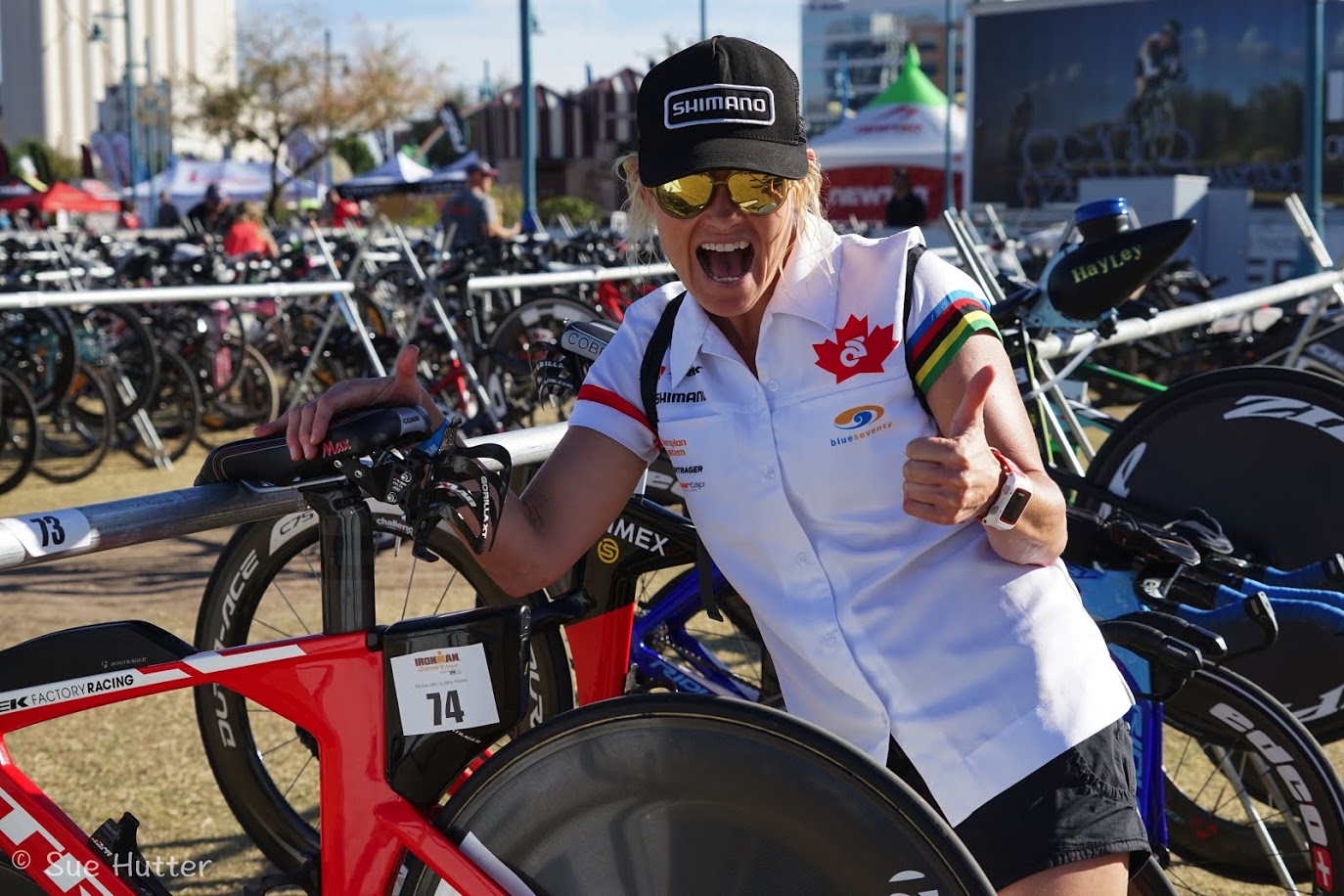 Thank you Sue Hutter for the incredible photos to document the weekend!

I have been to Phoenix MANY times… for mountain bike racing and now for triathlon related events.  Since I did the first Desert Classic Duathlon, Joel Clapick has offered me shelter from the desert elements.  Thank you so much Joel for being such an incredible host!  In addition, this trip would not have been nearly as successful without the efforts of the crew at Cyclologic.  Thank you so much everyone and in particular Claudia and Paraic for your contributions to my success as an athlete.  I appreciate you guys so much!

I now have greater appreciation for how different Ironman is from any other triathlon I have done and the amount there is to learn about the race.  The coles notes on the race at Ironman Arizona start with the first order of business-poor swim execution.  I started right where I needed to be (where the fast girls were) but had no idea what direction they were going to go.  I chose goggles that were far too dark for how dark the morning was and seconds after the start I had no idea where the pack had gone.  I spent the first 200m getting pushed under by a girl who was trying to swim on my hip so that combined with my directional issues meant I swam in no man’s land by the time we all settled in.  I swam faster than Whistler (where I also swam alone) but I expected to be a lot faster than that.  I gave myself a massive hole to dig out of right from the start. 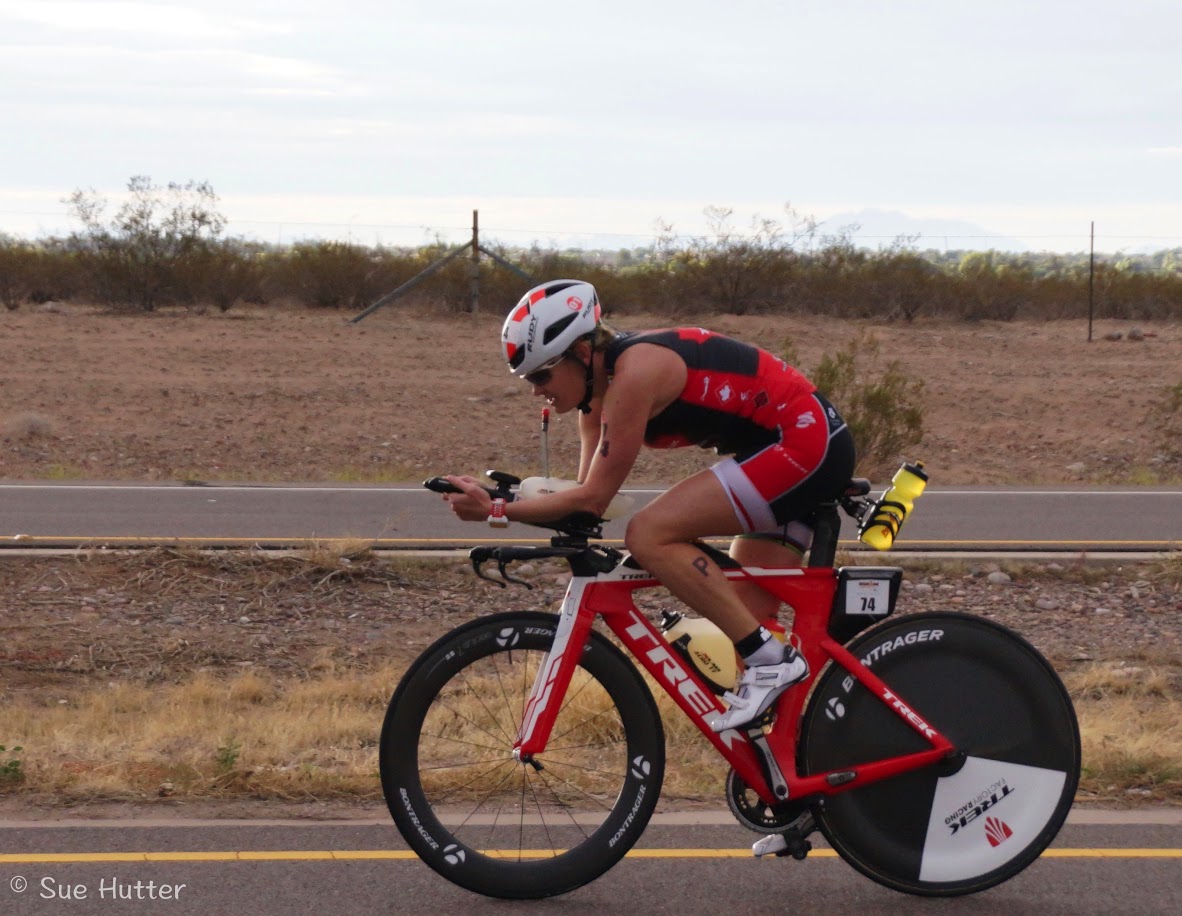 I had mint legs when I started riding.  I was holding back, holding back and holding back and the numbers I had thought would be awesome were so easy.  I had a pretty awesome even split for most of the race and a very low, controlled heart rate.  The problem is I was getting dropped.  While I was having a nice Sunday ride, MBK was tearing ass out in front of me, chomping massive time gaps into me every lap.  It was not until the 3rd lap that the bleeding stopped and I clawed back maybe a second or two.  The good news is I had great legs.  The bad news is I did not use them when I could so I was fighting for the podium at best. Coming off the bike only Amanda Stevens had a hope for the win other than MBK. 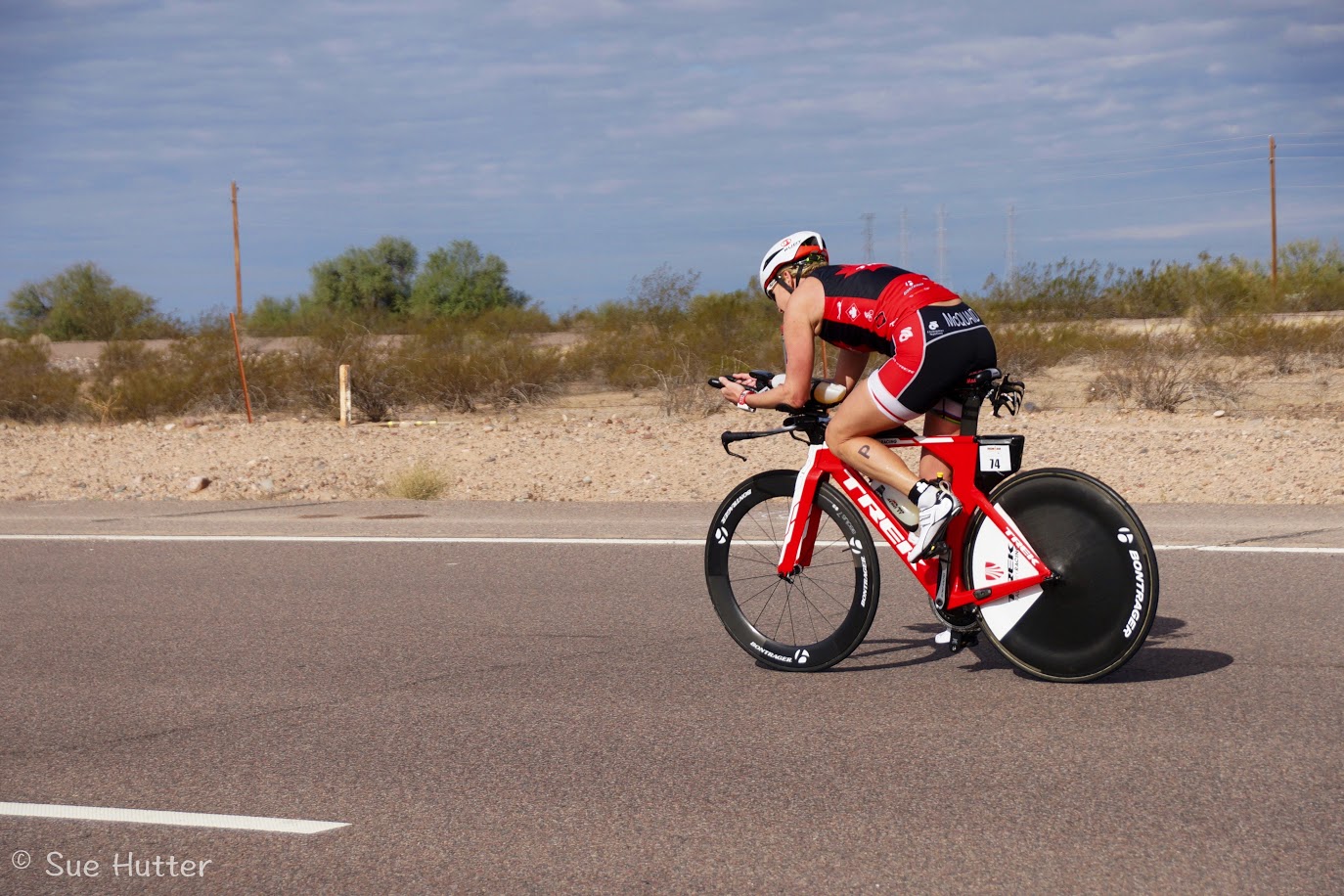 I ended up riding myself to fourth place by the run and as a result of the comfy bike ride I left transition with fresh and bouncy legs.  Again, I spent the run holding back hoping to run a nice even or (hilarious) negative split.  I totally appreciated having Tara as my lead cyclist, thank you for your kind words!

I was watching my splits, slowing myself down, pacing correctly and pretty much staying even with the girls in front and behind me for the first 24 or 25 miles.  Thank you Heather, Wattie and Cliff for the excellent run cheering J.  Then BOOM!  My legs were done.  Out of nowhere while I was comfortably jogging that damn marathon my legs went into complete quad lock and I was done for.  WTF.  Instead of being relatively competitive in 4th I am running on stumps and positive splitting like a mofo and heading backwards.  7th was where my freefall through the field was mercifully cut off.  So frustrating pacing myself only to feel WORSE than my first marathon when I tore out of transition at 2:48 marathon pace.  OMG so frustrating. But eye-opening. 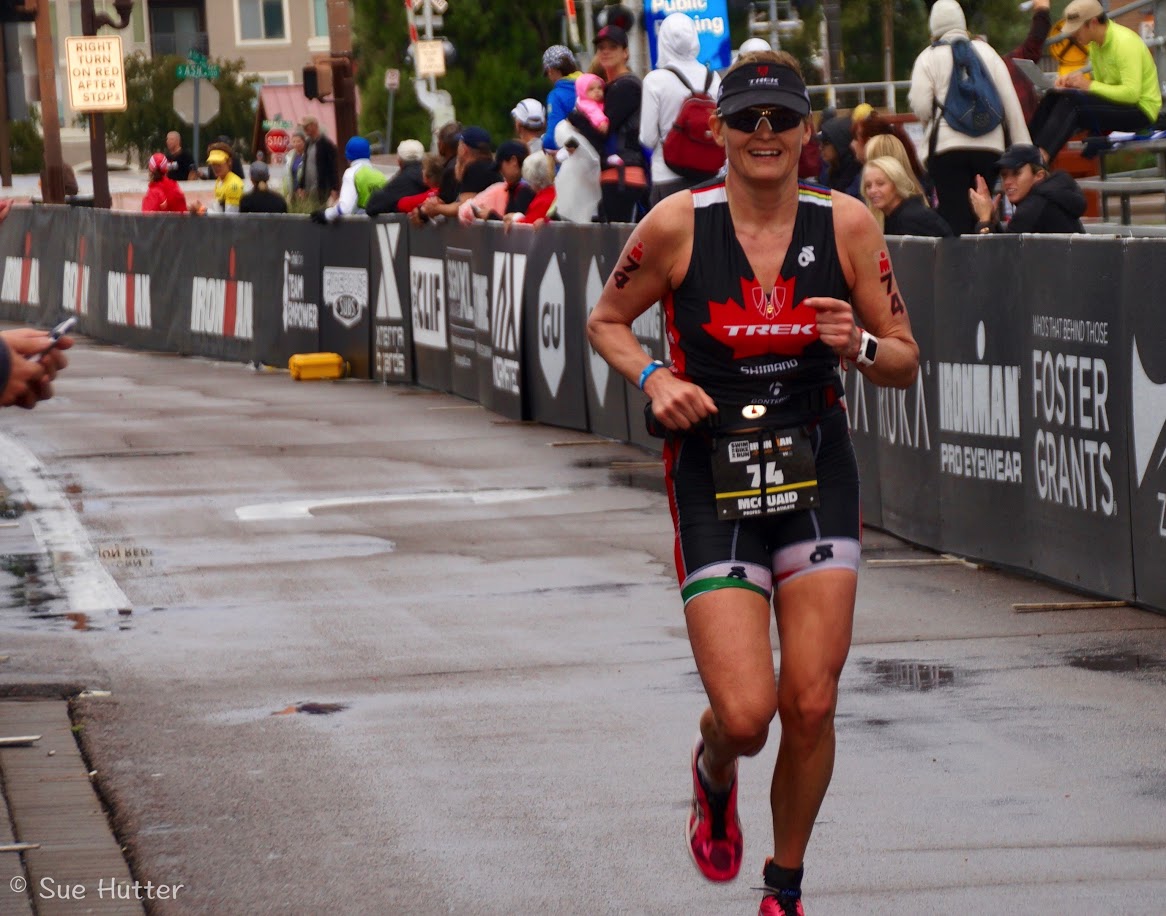 So done.. but still smiling.

So I am not overly happy with the outcome of Arizona but I learned a lot and I tried my best.  The combination of execution and form just did not add up to the performance I was hoping for.  In truth, the Arizona course may not ever be up my alley because I think I would be more competitive with hills but that is only the start.  I will approach training for this differently next season.

So I invested a year learning about Ironman.  Most of the investment was in my run and as a result I think my cycling was not where it has been.  This showed in 70.3 in particular.  However, each year is a layer and I am happy to have that behind me and I am stoked to be healthy and motivated to try all over again.  I’m learning and until you have raced a couple of these Ironman monsters to know what you are actually trying to do, you just don’t know.

As I put my rookie year on the Ironman circuit to bed, at an age that is only being pioneered as a valid age as a professional, I am excited about what I can do in my sophomore year on the circuit.  For those that share my age group in Ironman and have found Ironman recently, I think you need to expect, demand and pursue your best.  There are career defining performances ahead of me.  Appropriate training, disciplined recovery and resilience matter – age does not.  You can build a road to go wherever you want to go.

Thank you to all of my amazing sponsors who are coming back with me for 2016 and to the new ones that I will announce in a future post.  For now, I need to thank those in my #YYJ inner circle.

First and foremost, thank you to MC for being my voice of reason, my sounding board and for reminding me to “Keep it between the ditches.” xoxo

Thank you to my amazing coach/sounding board and friend Kelly Guest of Livefit coaching for believing in me, not doubting for a second my potential even when I did, turning off the noise, and finding how to motivate and inspire me beyond how I have been in the past.  Thanks for getting me to where I can run a marathon – no small task!  Thank you to his amazing group of elite juniors for putting up with the Ironman chick in the lane as well, I look forward to rising with the level you guys set.

Thanks to Clint Lien for letting me drop in to swim with some kids my own age.  Thank you to Marilyn and Danelle for setting an example for me of the potential women in their 40s have for run speed (a hell of a lot!).  Thank you to Trek Procity for supporting/heckling me – looks like there is more fun to be had at my expense ;).  Thank you to Jamie Grimes and Synergy Wellness for resurrecting my career when I was hurt and keeping me on track through the biggest challenge yet. Thanks to Brent McMahon, Meredith Kessler and the Wurteles for being amazingly supportive, knowledgeable friends who have helped me have as much success as I have in my first attempts at Ironman – you guys are the most incredible athletes and people and I am so lucky to know you. 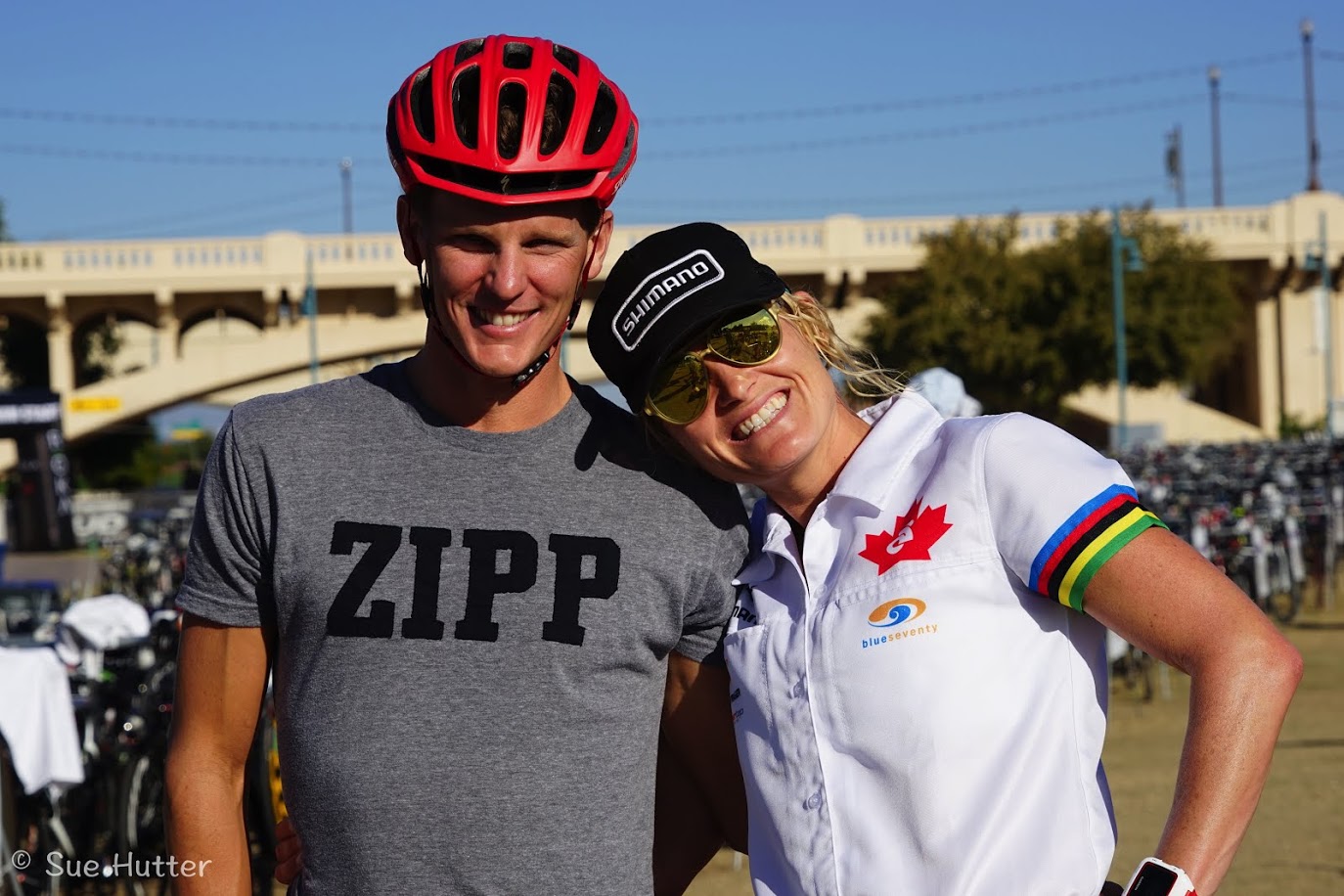 Thank you to all of the girls in Ironman who have reached out and supported me including but certainly not limited to Meredith, Heather, Sarah, Sara, Danielle M, Kelly, Beth, Magali, Mackenzie, Karen, Jenn, Tati, Breanne, Linsey, Michelle V, Amanda and the many others I don’t know well yet but can’t wait to get to know.  It is a band of sisters who share the same passion, dreams and goals and I love the comradery of the sport.  It is such an amazing way to get to know yourself and to know others.  I am so incredibly happy to have the opportunity to pursue this in my life.   Much love to you all. 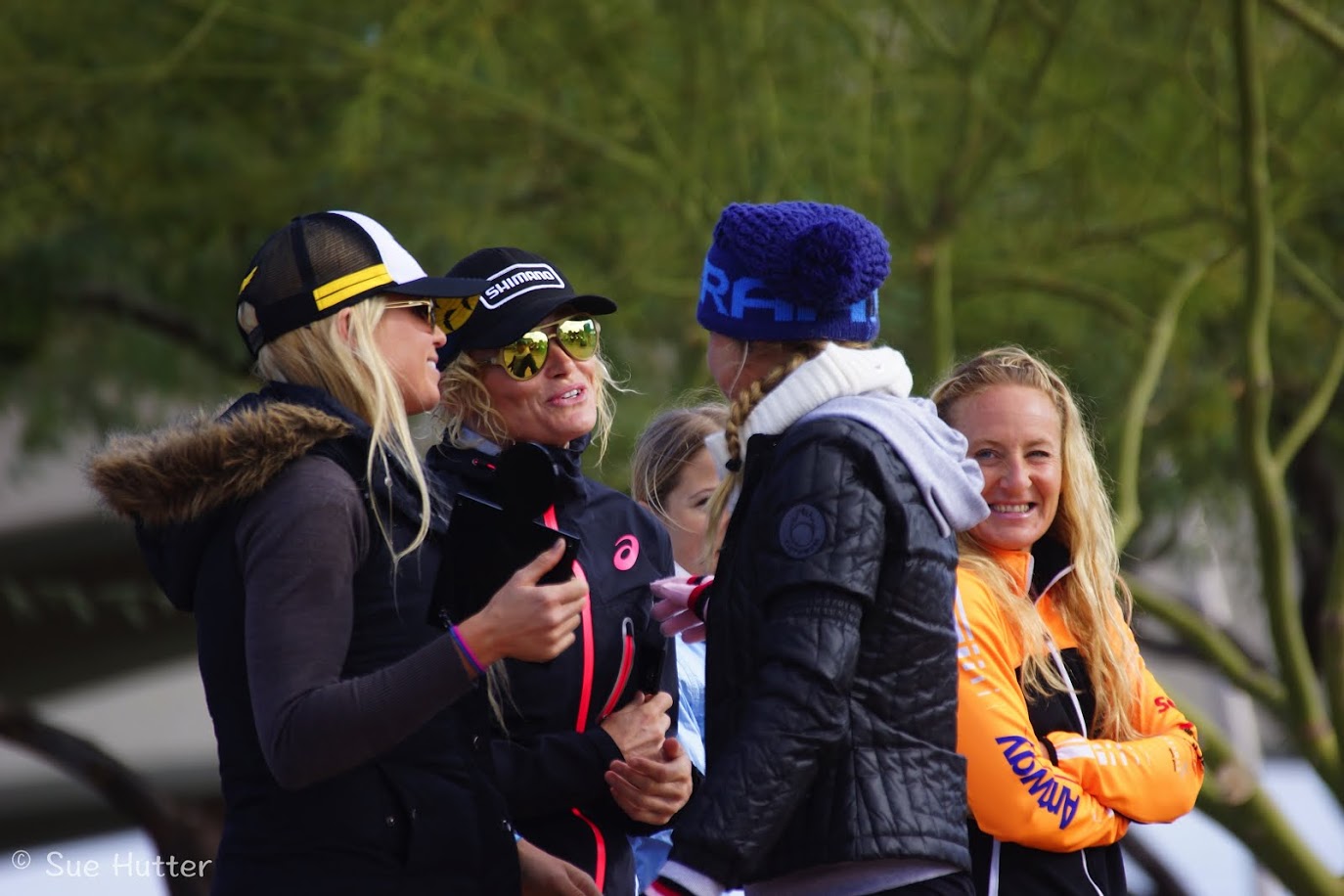 Now I start some offseasoning on my mountain bike.  Looking forward to a weekend with my girls Buttons, Danelle, Jennie and Brandyland shredding the trails that started this whole adventure as a pro athlete: Hornby Island.  Life is good.