The village of Mont Tremblant in Quebec hosted the 2014 edition of the Ironman 70.3 World Championship this past weekend, inviting almost 2200 athletes to test themselves on one of the most beautiful race courses in the world.  Any competitor would agree that a better venue or race organization would be hard to find.   From the course chosen all the way to the incredible post race awards show complete with Cirque du Soleil acrobats, the crew in Tremblant really set the bar high for whoever comes next to put on this race.  I really was proud of Canada doing just an awesome job being the first country other than the US to host an Ironman Worlds.  I was also impressed with all of the women in the pro field, particularly our top 3 finishers Daniela Ryf, Jodie Swallow and Canada’s Heather Wurtele.  Added to Heather’s success, Rachel McBride and Magali Tissyere also took 9th and 10th place to keep 3 Canadians in the top 10- the best Canadian performance ever aside from Sam McGlone’s win.  The depth in Ironman racing is increasing rapidly in the women’s field so it is great to see so many Canadian women doing so well. 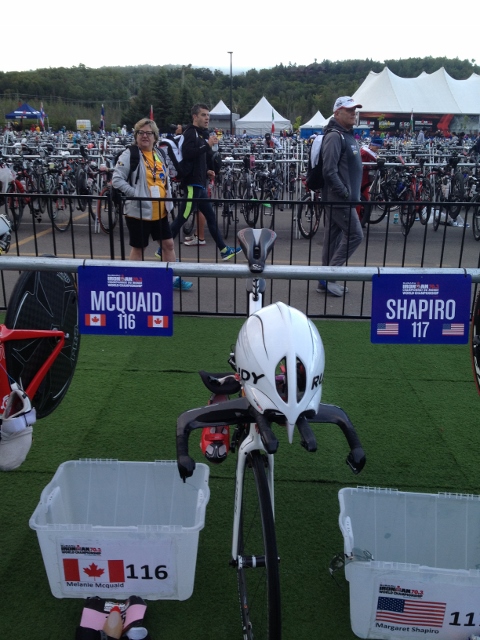 My trusty steed – with our post race hosts John and Cindy cruising transition in the background.

My race was unsatisfactory.  Coming off a solid training block, a series of great races punctuated by a great race and run in Lake Stevens, I felt confident that this would be my best performance ever at a Worlds.  Then I crashed my bike, hard, a week out.  I was lucky to avoid broken bones, so I thought/hoped/expected I had plenty of time to come around.  I wasn’t my best but I was thinking I could overcome it.  I didn’t.  I just did everything I could with what I had on the day.

The whole race was sub-par but it really only shows on the run.  I have great fitness so I did stay somewhere near the race the whole time.  I still swam with the group and still rode with a group of strong girls.  I didn’t have the race I trained for.  I was sore and flat but still hoped it might come around as the race unfolded and I was really focused on doing my best.  I swam/biked myself close enough off the bike to run for a solid top 10 in the race.  I had plenty of top girls to race as I was with Magali, Svenga, Radka and Cat out of transition and I focused on having a run like my last race in Lake Stevens – aiming for top 10.  But there is no hiding on the run and the race was over for me.  My best running legs were needed  – not my worst.

I finished anyways since a DNF is always worse that a beatdown and there were a lot of happy people out there racing.  I wanted the experience of the whole race course regardless of my result.  Now I can say that I finished the Worlds when they were in Canada… rather than just say I was in Tremblant. Haha! Consolation prizes.

My dad had the best comments when I discussed my disappointment with the day.  He pointed out that part of the difficulty with being a goal oriented person is you can get terribly frustrated with yourself and with the goals, especially ones that push your limits.  Goals are supposed to be just out of reach so that you can try to stretch yourself to reach them. It was never going to be easy for me to compete with the best in the World in Tremblant, it got harder when I crashed, and it hurts to fail.  I am particularly raw when it comes to World Champ events because for a time I was a clutch performer and since then have experienced some major inconsistency at the big races.  This year I did win two 70.3s wire to wire, podiumed a couple more, won a 5150 (and the chase) and remain undefeated at XTERRA in Canada after winning another Canucklehead title.  So I have achieved some of my goals – probably because I set increasingly difficult ones.  I wanted to go after this Worlds, I gave it everything, and I can use the dissatisfaction to fuel another opportunity which happens to be another Worlds. I am lucky to get another go.

Next is XTERRA World Champs. The training I have done for Tremblant should serve me well, I’m happy to get to fly to beautiful Maui and I am working hard to refocus the lens on that race. I was expecting a performance close to my best ever shortly before this race so I am happy there are still other chances to find it.

After the race we went and created a lot of happy memories.  Starting with a fun evening with Brent’s homestay Cindy and John, Lance, Carolyn, Ben, Mike, Brent and I shared some war stories and laughs. The next day we hiked up to the top of Mont Tremblant, I got four hole in ones on the mini golf course,  was lapped on the go cart track, ate a crepe big enough for four, all before heading to Montreal.  Our trip to the city included summiting Mont Royal (twice- once as a last visit before flying out), cruising McGill, perusing St Denis, Mont Royal, St Catherine, St Paul and Sherbrooke Streets, taking in the Faberge egg exhibit at the Musee de Beaux Arts, eating at Avenue Café, experiencing Joe Beef (we got the smoked meat experience here – only it was salmon!!), touring Church of Notre Dame, Place des Arts, Place Jacques Cartier and Museum of Montreal, renting Bixi bikes to cruise all over town, enjoying happy hour in Old Town, shooting the rapids on the St Laurent in a jet boat and visiting Le Fauberge district for our last night and obligatory poutine order- I am not sure we could have done more with two days in Montreal.  Montreal is kick ass.  I could absolutely live there- in the summer.  My only criticism is for such a cool and fancy town the coffee in Montreal is crap- I’m sorry but Nespresso is terrible. 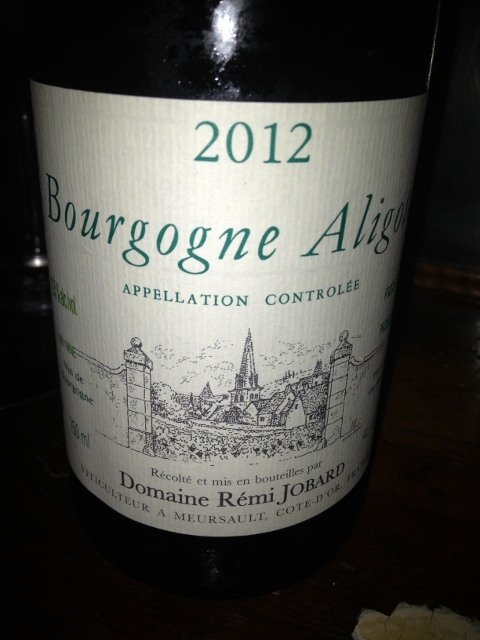 My first experience with the grape Aligote…. great suggestion from Joe Beef

Thanks Mark Andrews from Trek for the on- site race support. Thanks to Ryan, Ben and Mark from Shimano for the hospitality and the cheering.  Thanks Blue Seventy wetsuits and goggles for another solid swim split.  Thanks to Champion System custom apparel, Powerbar nutrition, Cobb Saddles, Rudy Project helmets, transition bags and sunnies for the support on and off the course.  Thanks Powertap for the cheers and the ability to analyse (and sometimes over analyse) the numbers from my day.  Thanks to my home supporters Trek Pro City and Synergy Health Management.  And thanks to my family and friends for supporting me with messages before and after.   Much love back to you all.