It is the best feeling in the world running down the finish chute high fiving a massive group of people cheering for you.  It has been since March of 2012 that I got that feeling in a 70.3 event and it gets better every single time.  Thank you so much Boise! Taking the lead out of the water and never relinquishing it is a first ever for me and is a testament to the hard work we are doing down at our little pro swim club at Crystal.  Thanks so much to Clint Lien and lane four: James, Sara, Stevo, and Geoff.  You guys are the best! 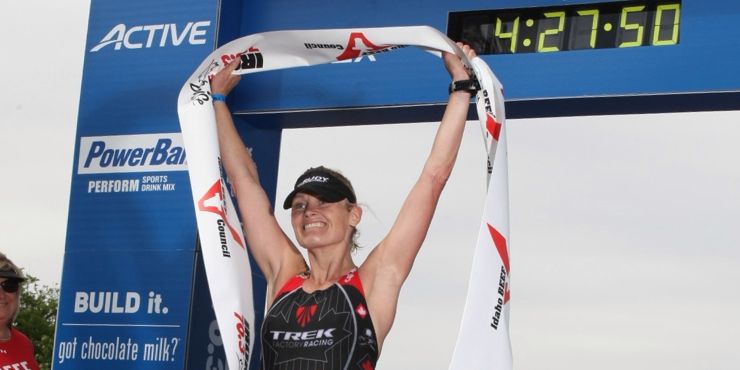 Wrestling the win away from the pro ladies in Boise took it out of me.  Liz Lyles is a phenomenal runner  so until the final stretch I was never sure I had it.  Sue Buse came from behind to run into third place with the best run of the day and my Blueseventy teammate Kate Bevilaqua set the pace for most of the swim to set up a Blueseventy 1-2 out of the water and she still held on for fourth on the day.  A very strong group of professional women rolled out at high noon to do battle on the day.

I was a bit more tactical this week on the swim.  After the start, I was trying to take the lead with Kate strongly keeping pace on my hip.  I made a few quick peeks behind us and saw we were towing the group, not unlike last week where I towed two girls, one on each hip.  Since Kate wasn’t interested in my feet, I chose to hop on hers.  Why make it easier for everyone behind us?  So I swam on her feet until someone kept surging up my side. I had no interest in a non Blueseventy athlete coming out of the water first, so in the final stretch I made sure it was a Blueseventy Helix across the line first.  This is when I took the lead.

Onto the bike, I was excited for a nice windy race.  I am riding with the new Rudy Project Wing57 helmet which is super aero but light and cool… no overheating brains in it.  I was riding the Bontrager Aeolus 9 that I had been riding in Hawaii which was perfect on the day in the never ending crosswind or blasting headwind.  I also raised the angle of my extensions on my Trek Speed Concept which improved my handling in cross winds and made me feel much stronger than last week.  Getting these little details ironed out takes a lot of riding, I have discovered.  I think you not only gain fitness from racing but you also get ‘race feel’ from racing.  That is why I am improving.  I definitely felt better on the bike than last week, so that is encouraging.  Even my Powertap files are improving week over week so it isn’t just me thinking I am better – I have objective data to prove it. 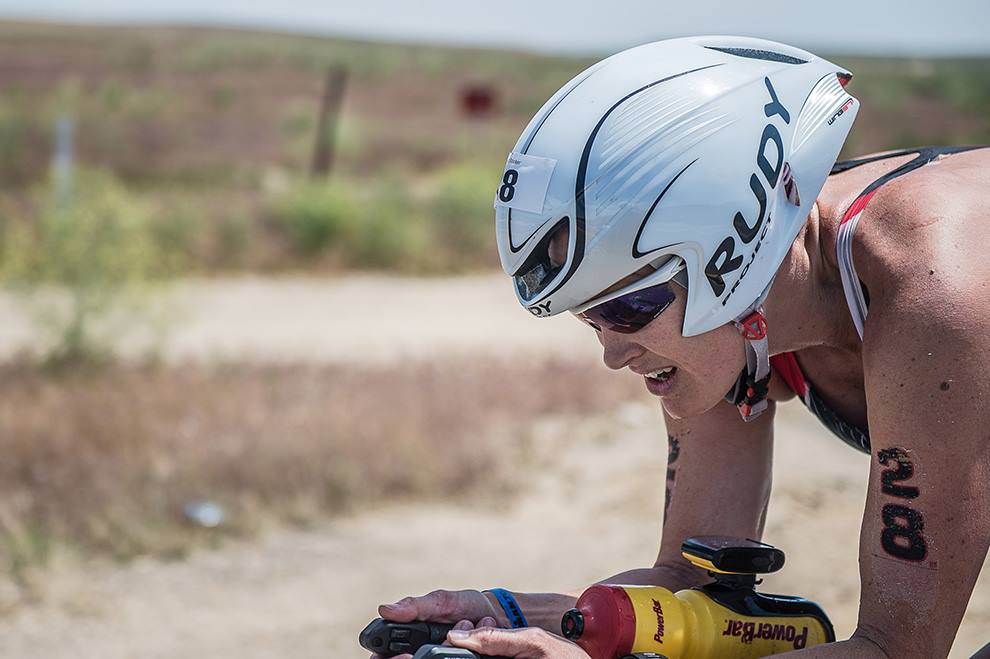 I came into T2 alone but had no idea where the field was and I honestly never believe any splits out on course.  Thinking the run was pancake flat, I started out at 3:55/km pace because I am capable of 1:24 or less and wanted to run sub-1:24.  However, instantly I knew my split was not going to be in that range given how hard that pace was for legs that were relatively ‘good’.  Sure enough, the MEN ran 1:18 so not looking and panicking about what my splits were was the right decision.

The first lap I only lost 25 seconds to Liz, a much stronger runner than I, so that was encouraging.  The second lap was very hard.  I don’t know if it was running second half marathon in 7 days fatigue or just hard bike-to-run garden variety fatigue, but the miles went by very slowly on the second lap.  I actually ate a world record’s worth of Powerbar Powergel for me, still falling short of what Brent can pound back, but three full gels on the run after six on the bike is amazing intake for me.  I held my losses to Liz to about a minute so that was a very good run for me- even if I grossly miscalculated the splits.  What I would say is using perceived effort when you are racing is a very important skill – don’t be a slave to your gadgets in training!

Running into the finish line and getting a high five from Brent who had also won was also pretty awesome.  We had a fun two weeks hanging out being training buddies.  I think his awesome work ethic rubbed off on me a little and thanks to him I had an excellent motorpacing session the day before the race that sparked my bike legs up nicely.  I need to match my schedule to his as riding together seems to work out well for me the day before the event.  I also have to thank Michael and Jenny Tobin, my XTERRA buddies, for not only being part of the organizing committee but also providing housing in the super athlete pied a terre at their place.  There was lots of inspiration for excellence there. 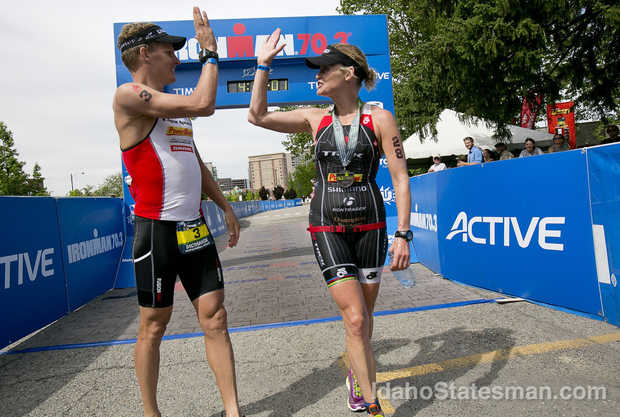 I am so proud to fly the flag for all of you from the top of the box.  Thanks for the cheers!