2014 marked my second trip to Kona, Hawaii for the Honu 70.3.  I fared much better in the race this time around, earning 3rd place after the fastest bike split following Angela Naeth and Bree Wee to the line.  The race was a Canadian trifest with Brent McMahon also taking the men’s win and numerous Canadians stepping onto the podium.  Way to go, eh? 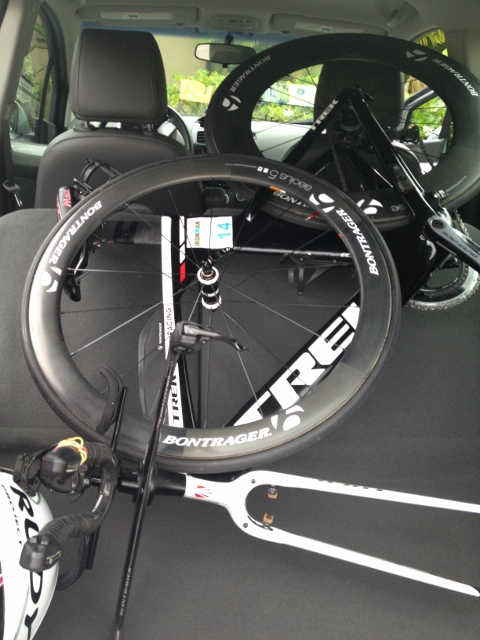 Warm water in Hapuna Bay greeted me in my Blueseventy swimskin-and with present swim form I was expecting a fast split.  However, I missed the train of the pro men (we started together and stupidly I chose the Brent McMahon side which was too fast) and ended up towing a barge of girls around the swim course. Despite aiming directly for buoys to try to convince them to move to my feet instead of my hip but I couldn’t get free -so coming out of the water I gave up and swam on some feet to conserve energy.  I need some ITU swim strategies in my arsenal maybe?  That meant a deficit of about 50 seconds to the lead girls.. including Magali.

Then we moved onto the bike where I took a good while to get going. I was instantly dropped by Angela while Magali rode away with her.  I was feeling tight, sore, and too hot.  I encouraged myself by reminders of how fast Angela and Mags are on the bike, how each race I am getting stronger and I also made a deal with myself that if I toughed it out as hard as I could I didn’t have to go to Boise next week.  Haha!  Then I drank a bunch of Perform, ate some gels and waited for my legs to get better.  Which they did.

After the turnaround to Hawi I could see that I was no longer being dropped and instead was pulling back the leaders.  I caught Mags and felt like maybe I was getting closer to Angela up the road.  Sure enough, I closed all the gap to Angela on the hill back up to the Queen K so I was definitely climbing fast but Angela was faster than I on the downhills and flats.  That girl can push a lot of watts!  I was happy to be climbing very well on the new Trek Speed Concept and that brought me back to the front of the race.  Although I feel I didn’t have a good first half of the race, the average watts according to my Joule for this event were higher than both my other races this season despite the long downhill so I believe my bike form continues to improve.

I rode tubular Bontrager Aeolus wheels for the first time and I have to say that tubulars are very nice to ride.  There were a lot of pre-race jokes about changing a tubular flat and breaking a nail but the road was swept perfectly for the race.  Thank you to all the Honu organizing committee for maintaining such a nice race course.

I have been slowly building back my running but every step forward I have been slowed down by a bit of an injury so I really didn’t know what I could do.  So when I led out of T2 I just said to myself to stick like glue for a minimum of 4 miles.  I trailed Angela as close as I could but by mile 3 she was gaining about 5 seconds per mile.   When we got to the hot, terrible hill at about 5- 6 miles my elastic band to her back broke and I went through a rough mile.  I pulled it together again but at the terrible hot, down/up out and back 10-11 miles I was dizzy wondering if I was going to have another Hawaiian DNF.  No amount of Powerbar Powergel or coke was bringing me back.  Then started my 12-13 mile death march where Bree went sailing past.  I appreciate that she kept looking back to see if I was going to respond but I had all kinds of emergency warning systems going off in my body so there was no response.  I also appreciate the kind age group man running by me who said “less than five km to go” because I really did need this reminder.  I ran in for third which was absolutely all I had on the day.  Magali stayed strong to finish in fourth and fellow Canuck Karen Thibodeau took sixth.

The Hawaiian leis for this race are so beautiful and smell delicious and the prize is an ‘umeke which is going to be a wonderful keepsake for all the podium finishers.  The warrior escort to the podium is quite unique and fun as well.  I think everyone should experience a Hawaiian race in their triathlon career-XTERRA or Ironman. 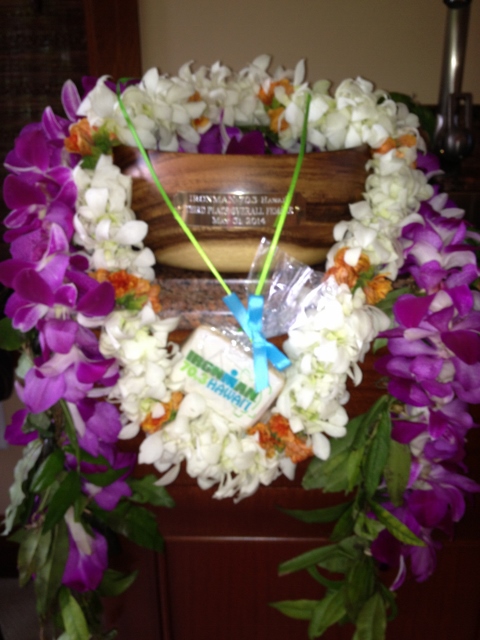 The awesome Hawaiian leis and bowl.

The good news is that this is the first race where I finished without my leg and foot thing flaring up so I think the injury is behind me and I can start to run a bit more consistently.  I really appreciate the help from Jamie Grimes at Synergy Wellness in Victoria helping me through this.  I also appreciate the help from Marilyn Arsenault at Mindful Strides in Victoria because if I hadn’t changed my run form I was never going to be able to run injury free.  I am encouraged that I am coming back.  I may have lost time to Angela and Bree on Sunday but both are formidable competitors who had very strong races and for most of the race, so did I.

Thanks very much to Marcy and Bo Fleming for hosting Brent McMahon and I at the spectacular Ke Kailani housing development… what a treat!  It was fantastic to hang out with them and the whole tri crew from Oahu at the post race party they hosted.

I enjoyed a few extra Hawaiian days at my own favorite happy place on Maui with my friend Dr Aaron and his nephew Marc, who was my training buddy during the week.  We had a great time hanging around Paia style.  Mahalo Aaron and Marc for the awesome stay and I look forward to seeing you guys again in the fall. 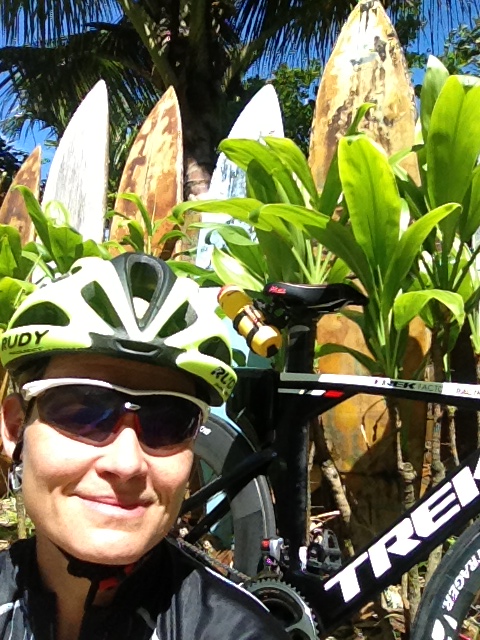 So until next time, thanks to Trek, Bontrager, Powerbar, Champion System, Shimano, Rudy Project, Powertap, Blueseventy, USANA, saltstick, Trek Procity, Synergy Wellness and Wiink2 for the continued support.  This year is really a lot of fun and is getting more successful as we roll along.

I am optimistic about how my body has been coming around since the race so I am really looking forward to Boise 70.3.  I guess I am going to renege on the deal with myself that I made in a weak moment in Hawaii.  I am excited about the super strong field that is waiting for me there and I am planning to be relentlessly positive throughout my race no matter how it is going.   I am hoping to challenge super MBK and defending champ Liz Lyles.  I am cautiously optimistic that I can perform better on the run this coming Saturday.