Having an XTERRA in my hometown was an absolute treat this year.  Thank you so much to Monique and the Human Powered Racing team for putting on a top notch event at Durrance Lake.  I think I speak for all of the competitors when I say what a great day it was, what a fun course it was and how great the entire event unfolded.  So much fun!

Rolling out of bed and riding my bike to the start was an added bonus.  Winning some cash to spend stopping in at Nourish to pound a huge pile of healthy food was a super mega bonus!  I  also won a chocolate cake due to staying within 15 minutes of Brent which I donated to the volunteers since coach Adam Zucco would have had heart failure and made me run 20 km further if I had eaten anything that wasn’t loaded with the highest quality nutrients without calories (haha.. just kidding Adam. Kind of.).

Thank you to Hayley, Rob and the team for feeding us at www.nourishinsight.com and supporting the race.  You guys are so great.  Rob is famous for putting on the Mongolia Challenge so if XTERRA is not quite enough adventure check out www.mongoliachallenge.com.  Thank you to Muscle Milk for having an excellent massage therapist and recovery zone on site and thanks to the guys at ProCity  Trek Store for supporting the event and doing loads of pre event machine tunes.

A big high five goes out to all of the youth competitors.  Due to a misunderstanding with the volunteers, all of the kids rode THE ENTIRE 12km ADULT (HARD) SINGLETRACK COURSE instead of the planned 2km on fire roads.  The kid’s race took between 1h40 and 2h for the entire field and ALL OF THEM FINISHED!!!  So if you are wondering why superathletes come out of Victoria, that is why.  Local super runner Lucy Smith was out on course coaching her daughter Maia as she tore it up out on the trails.  Teaching “overcoming adversity” when the opportunity presents itself.  Way to go future superstars, I think you should all be so proud of yourselves for overcoming that challenge.

A big thank you to Jasper Blake for being such an awesome human being in general and an excellent race announcer to boot.  So much hilarity!

Local events, although low key, come with a certain amount of pressure.  Most of that pressure is from within in that I want to show that I am good at my sport in front of my town.  I do loads of bike races and run races where I am either not in shape or not in any condition to race fast and can just chalk it up to training.  However, for my event, there are absolutely no excuses.  So it was a great workout in that I did three days of quite hard training leading into the race and then I was super motivated on the day to go hard and be fast.  Lots and lots of benefit will come from that.  It doesn’t hurt that I have budding super pro Kate Button in the field to keep it honest on the day as well.  She wouldn’t think twice to run me over if I wasn’t going fast enough (she’s getting really fast and feisty) and she is definitely getting closer! 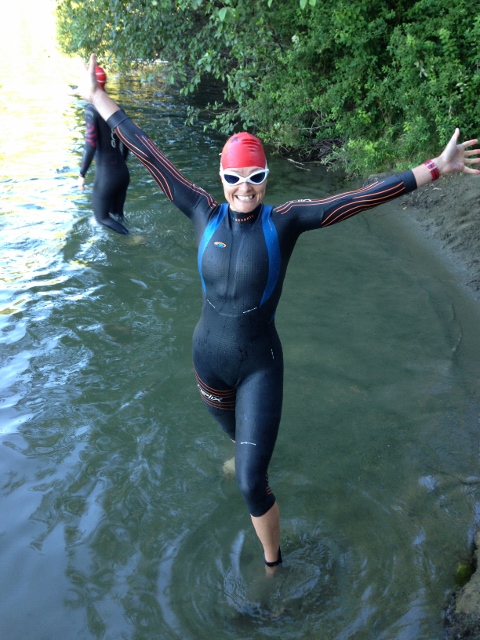 The swim was fun.  I was out in fourth sandwiched between two fast young athletes, one of which is Maya Munzar… who I believe is going to be very strong in the future.  I know Kelly Guest is coaching a group of future stars so it is great to see them out in action mixing it up at the front.

Out onto the bike, I quickly caught ironman legend Tom Evans and was SO EXCITED!  But then I took us off course in my excitement from which we needed to double back and then I held us both up soft pedaling through a bunch of sections as I wasn’t sure where to go. Sadly, after this mishap and before we started hammering again Mike Palmer caught both of us.  This is what woke me up… I couldn’t let my old training partner beat me.  Bragging rights were on the line.

There was a long-ish climb before we did a second loop so I caught on to him and then dropped him by the top (not by much) with some encouragement from Mike who hiked in to check out the action.  This is the only advantage of an uber-light hardtail in Victoria.  He caught me halfway down Switchbacks and never saw him again on the bike.  No hammering uphill was making up for the time I was losing to super Palmer in the singletrack as he posted the fastest bike split of the race.  Nice work, buddy!  I found the most technical stuff in the race was the non technical stuff because of how dry, loose and rocky the trails are.  When technical is unpredictable it is worse than expected technical difficulty, in my opinion.  However, that was the least technical our local trails will get and all participants can feel good about the fact that if you can crush this course, everything else on the XTERRA tour will feel like a ride along a paved bike path.  Sometimes it actually is!

However, out onto the run I was feeling strong but was very, very conscious of how technical the trails were.  Still, my legs were ticking over well and I caught Palmer part way through the first lap.  Two very fast age groupers were running by me, one was Derek who was blistering fast and then another guy named Ian went by but I kept the tractor beam on him until I sprained an ankle.  I had put trail shoes with laces and socks on to try to control this risk but despite this caution, I still sprained an ankle on the last downhill (mild).  It was a steep, gnarly and technical run course.  The best kind. Tom caught me at the bottom of the hill before the finish and despite trying to sprint I still lost by 2 seconds.  So much fun!!

So that ends the training for Lake Stevens 70.3 this weekend.  I am sure the run I did on Sunday will prepare me well for the hills in Washington State.  I am happy to switch from the Trek Superfly to the Speed Concept and give it another rip on the Ironman 70.3 scene.

Congrats to my fellow pro ladies Katie and Jennie.  Looks like we just recruited another XTERRA pro!!  See you girls at Trans Rockies.  xx

Thanks to Trek, Procity Cycles Trek Store Victoria, Bontrager, Rudy Project, Shimano, Powerbar, Champion System, Polar, Blueseventy, Powertap, USANA, SciCon Bags, Synergy Health Management and Wiink2.  All of my sponsors, partners and friends are incredible and I invite you to see for yourself the excellent work they are doing.

Thanks to local YYJ sponsors Equinox massage (I won the giftcard!!), Delta Ocean Point, Thrifty Foods and Plante Foods for supporting the event.

Finally another big thank you to Monique Moore for putting so much effort into the event and thank you to all of the volunteers and the HPR training group for helping make it such a big success.  Too bad Mike wasn’t racing, huh?