Luck Stone, a presenting sponsor of the XTERRA East Championship, has a comprehensive slate of coverage planned for Sunday’s pro race at 8am EST, that can be found at http://www.luckstone.com/xterra-world-tour-2012

On one screen they’ll bring you live video feeds from eight spots around the course.  On another they’ll showcase a social media (GIS) map of the course with detailed positioning and tweets from strategically positioned spotters and finally, in a first for XTERRA, they are equipping every elite with a GPS tracking device that will allow followers to see their every movement.  The “myathletelive.com” device reports location, speed, distance, and elevation.

Google Chrome seems to be the best browser for viewing, but fans can use any web enabled cell phone or handheld device such as an iPhone or Droid. Just go to the website xterra.luckstone.com, and follow the various links. Home viewers can do the same from their computer.  Our suggestion is to open up multiple browsers and have fun.

And, for those on-site at Brown’s Island Luck Stone will have four 70-inch big screen TVs broadcasting the coverage. Those on-site are encouraged to share their experiences via twitter with hashtag #xterraRVA (on a related note be sure to find the picture XTERRA Pro Damian Gonzalez posted of Cpl. Todd Love, who is doing the swim as part of the Team X-T.R.E.M.E. relay).

On Sunday, click on the name of the athlete to go directly to the specific URL for that racer.

On that note, here is a little background on my last 12 years here in Richmond.  My second year at this race I passed out unconscious at the finish line, woke up and puked on my shoe sponsor in the medical tent.  Good times!!  Looks like the weather should be worthy of some war stories so enjoy the coverage tomorrow!

What have you done every June since 2001?  Some might have a traditional summer vacation spot or a birthday celebration, but for 3x XTERRA World Champion Melanie McQuaid – it’s crushing it at the XTERRA East Championship in Richmond, Virginia. 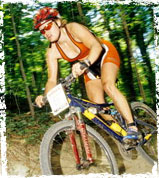 Since she emerged on the scene in 2001 the former World Cup mountain biker from Canada has been remarkably consistent, making her way to the podium every June for 11 consecutive years, including wins in 2004, 2008 and 2009 – and six runner-ups.

“I’ll tell you what, I don’t remember actually finishing all of those,” McQuaid said with a smile at the annual media day on Brown’s Island with the city skyline looming in the background.  She was referring to some of the collapses at the line she’s experienced as a result of pushing the envelope in stifling heat.

While McQuaid (pictured in Richmond circa 2002) might not remember it, age grouper David Karasik does – in fact, it’s one of his favorite memories.  “I remember Melanie just melting after finishing in second place in 2007, and then being dragged to the medical tent, loved that.”  To be clear, he loved it because of the effort.

McQuaid’s all-in, do-or-die type of racing has endeared her to fans for more than a decade, and you only have to look back to October for the most recent example when she collapsed with the lead and a hundred yards to go at XTERRA Worlds.

McQuaid was 28 when she made her first trip to the James River, and her success in the first one may have been the spark that ignited her career in XTERRA.