Beaver Creek is a resort above Avon, Colorado.  It is quite fancy, with some beautiful homes, golf courses, a skating rink and a bunch of great shops and restaurants exposed to the gorgeous views of the mountain.  The trails at Beaver Creek are also great with something for everyone from the beginner or woman with a baby jogger to some more technical and skinny single track for the mountain bike enthusiasts.  The XTERRA course started down in Nottingham Lake in Avon, sending us straight up to the top of Arrowhead at about 9500 feet before  shooting us across the mountain to Beaver Creek, where we climbed another 1300 feet on the run before finishing at the base of the gondola.  This is a true climber’s course with very thin air.

This year I put more time into my preparation.  I went to altitude early, I laid off the cookies and I did some specific training for blasting straight uphill with no air around.  I stayed with my favorite homestay Kevin, did the Avon Dunk n’ Dash to get primed, did one lap of the Vail Grind Race (the full race would be way too hard for my bad day of acclimation), I think I did a lot of things right.  However, part of my job is finding a way to get every last second out of my race and I think this time around I made some judgement errors that cost me gobs of time on the bike I had no chance to recoup on the run.  In the end, going to Beaver Creek was pointless when it comes to points but in terms of boosting fitness gains I am sure it is going to pay off in the long run.

Thanks to all of you who watched on www.xterralive.com! I appreciate all the kind words for my tough day and thanks to XTERRA for letting our fans watch from home.

Big congratulations to fellow Canadian Danelle Kabush for taking the win on the day.  She completely deserved her big win.  I was proud of her, Sara Tarkington and Suzy Snyder for taking the top spots on the day in front of Renata Bucher and I.  It was nice to see new faces on the podium after it all. 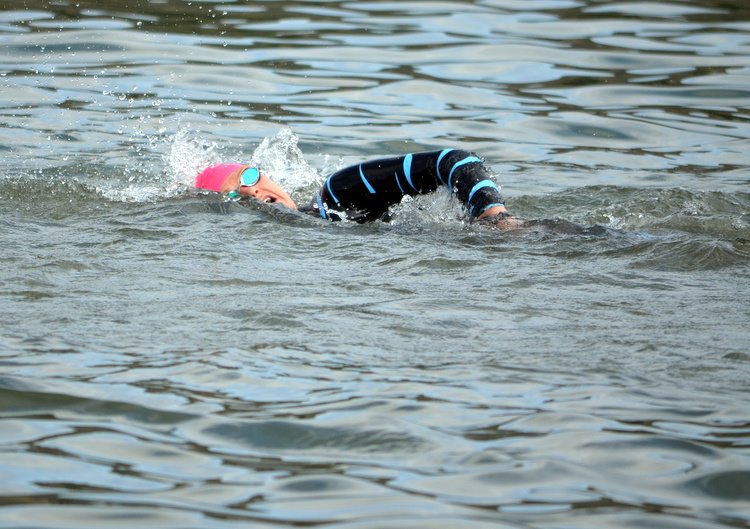 Photos by XTERRA  in my snazzy Hwy 19 Rogue wetsuit

My race in a nutshell:  I had a decent swim as normally I lose more time keeping the effort controlled in the early stages of the race.  I got out of the water in my normal spot although I let Suzy gap me when I was pushed off her feet by one of the men swimming with us, choosing to avoid any extra effort at all early in the race.  That was the same plan on the bike.  I rode the first section to Arrowhead very controlled as I knew I had very good power and felt the last half of the race was where I could put the most time in as it suited me best.  I also know Shonny did the most damage to me in the past in that section so I felt I could do the same since I had good legs.  Suzy was riding really well on the day and stuck with me for most of the first climb but I could tell when I opened it up a bit I could get a gap on her so I wasn’t worried.  However, when I hit the first major downhill and flatted I was worried. 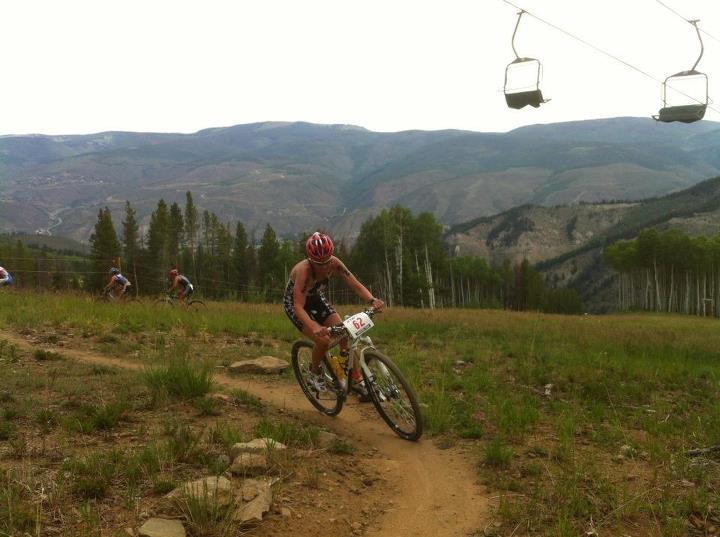 I used part of a cartridge to try to fill the tire, no luck, took the valve out and put a tube in but sadly only had a partial cartridge left so the tube was not really full.  I gingerly rode the downhill and then went in pursuit.  According to my Polar file below it looks like I lost a bit over four minutes on the side of the road the first time.  I was getting splits that I was closing the gap down… not as fast as I would have liked though as I was riding a soft tire in very rocky conditions that was bad in the corners and I didn’t want to flat again. 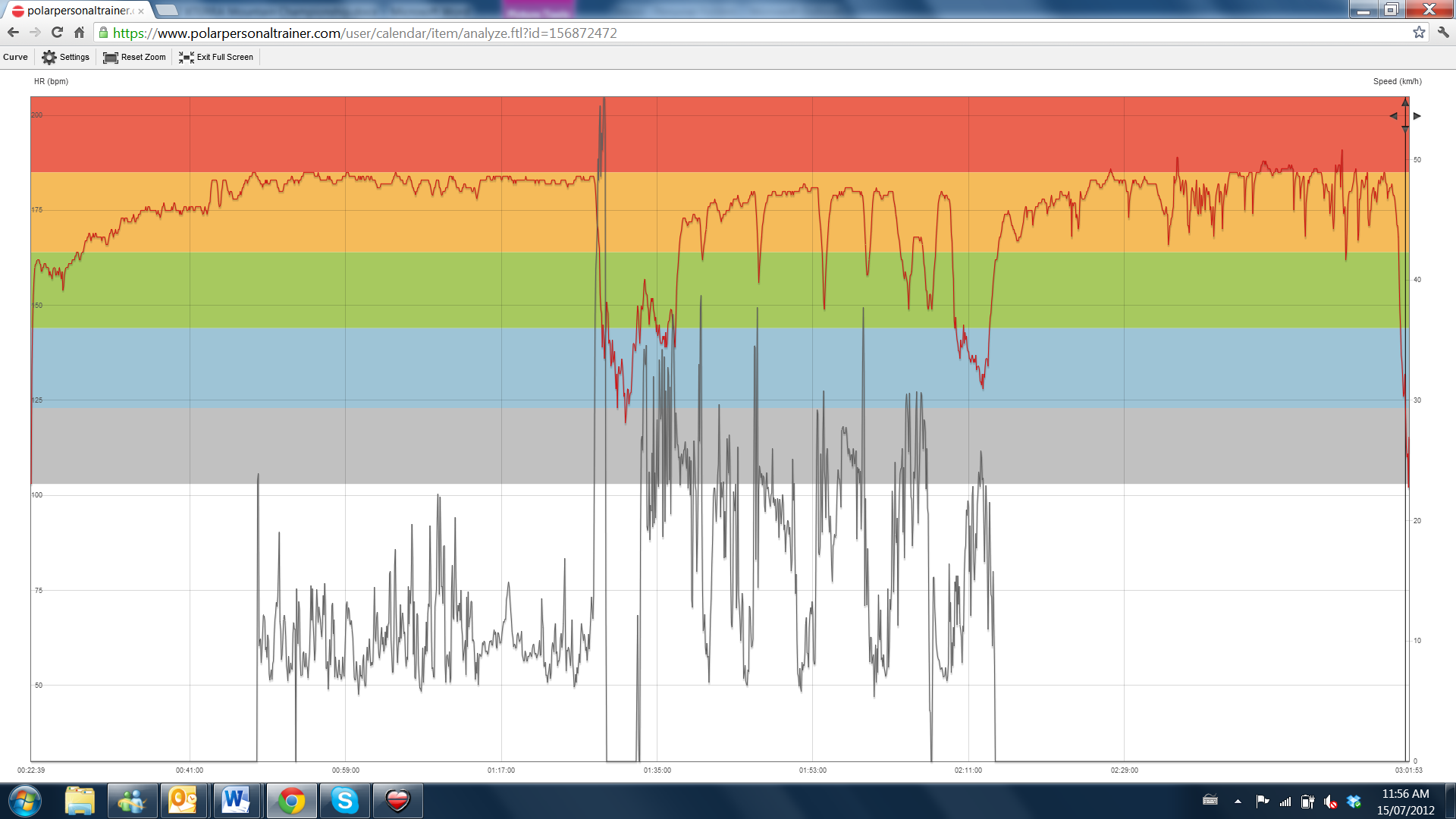 Polar file on the RCX5 with speed data on the bike.  The drops to zero indicate disaster 🙂

However, I did flat again in the last miles of the race which was a disaster.  I stopped again but my Big Air was finished so i hopped on to ride it out.  I rode the last half mile of Alley’s Loop on a flat, up the last climb and the entire way down corkscrew and into transition on the rim.  Because the ride was a disaster, I went off into the run a bit deflated, but chose to run a solid split to get the training in and get the most I could out of the day.  I ran in for fifth.

Now it isn’t all losses when you lose due to mechanical failure.  I got to practice with my Genuine Innovations inflator which needed to be done.  I was pretty sloppy with it, sadly, although I think I changed tubes fairly quickly.  In my next two XTERRA races I will carry more than one inflator for sure.  Also, the volume of tire I chose would not be appropriate for high speed at the pressure I choose to ride… so I had to learn that the hard way.  So lesson learned before Nationals and Worlds.  I was riding a prototype tire rather than one of the beefier offerings from Bontrager so I either need to ride the higher volume tire or more pressure.  Stay tuned on what the decision ends up being.  However that guy who asked why I never flat in races during my Q&A at the AVIA tent while I was nowhere near wood to knock on can totally suck it right now 😉 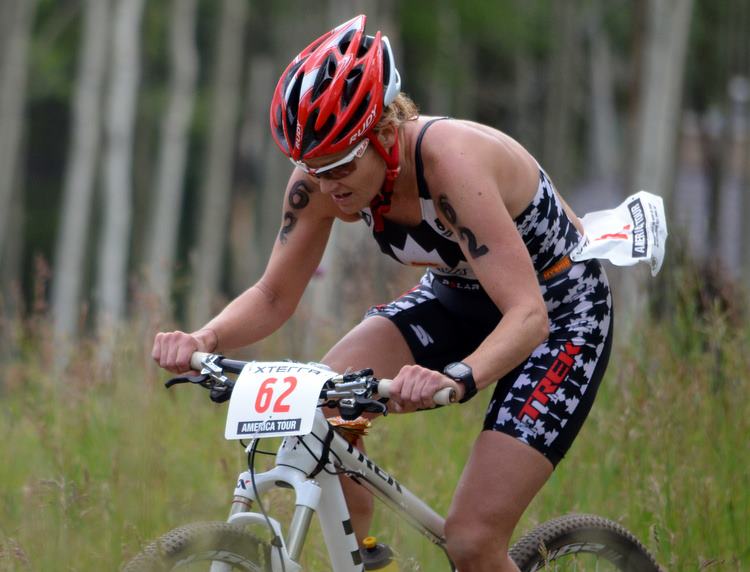 Next up is the Calgary and then Boulder 70.3.  I am feeling pretty fit right now and totally, completely and utterly motivated to kick some ass.  Here’s hoping I can bring full gas to both races.  Thanks for reading!